Continue to The Hollywood Reporter SKIP AD
You will be redirected back to your article in seconds
Skip to main content
July 22, 2019 1:38pm
Logo text

One of the biggest surprises to come out of the Marvel Studios’ Comic-Con panel on Saturday was the return of Natalie Portman as Jane Foster. Despite the fact that she showed up at the premiere of Avengers: Endgame, a who’s who of faces from the first 11 years of Marvel Studios, it seemed Portman’s days in the Marvel Cinematic Universe were behind her after Thor: The Dark World (2013). Aside from brief mentions in Avengers: Age of Ultron (2015) and Thor: Ragnarok (2017), and a quick appearance in Avengers: Endgame by way of unused footage from The Dark World and a new voice-over that Portman recorded for the scene, it seemed safe to assume that Foster was part of the MCU’s past. But with the announcement of her return in Taika Waititi’s Thor: Love and Thunder, it seems she’ll be an integral part of the MCU’s future, and rightfully so.

The Marvel Cinematic Universe has rarely seemed to know exactly what to do with Jane Foster, a key member of Thor’s supporting cast since her debut in Journey Into Mystery No. 84 (1962), one issue after Thor’s Marvel debut. Thor (2011) and its sequel both updated the character’s skill set while never really allowing Portman to find the complexities of the character beyond her relationship to Thor. Kenneth Branagh’s 2011 film made Foster an astrophysicist rather than a medical professional, giving her greater reason to be in Thor’s life, given the absence of his Donald Blake persona from the comics, but the film also saddled her with a comic-relief sidekick, which never felt like a believable relationship for the character. While Foster’s study of wormholes and her starstruck romance with Thor (Chris Hemsworth) was a solid place to start, further films didn’t allow her character to grow alongside her superhero counterpart. Her absence in The Avengers (2012) and Avengers: Age of Ultron also didn’t help distinguish the character as anything other than a casual love interest.

For whatever complaints there are to be aimed at Iron Man 2 (2010), the film gave Pepper Potts (Gwyneth Paltrow) something to do and a prominent leadership role in Stark Industries that set the stage from the character’s evolution throughout her subsequent MCU appearances. Foster in The Dark World was a plot device for an Infinity Stone who spent most of the third act running around sticking poles into the ground. The same year Foster essentially waited at a window for Thor to return at the end of Alan Taylor’s film, Marvel Comics took to elevating the character to a new level of importance in what would become their best title.

Jason Aaron and Russell Dauterman’s work with Jane Foster in Thor and The Mighty Thor forever changed the character. Foster had become less prominent in Marvel Comics over the years, and when Aaron reintroduced her in the pages of Thor: God of Thunder, she was battling cancer, a factor that in a lesser book would have been a bookend for the character and a means to simply explore the grief of its central male character. But when Thor became unworthy and lost his hammer during the events of Original Sin (2014), Aaron made Jane Foster the new Thor, with the caveat that every time she transformed into the God of Thunder, her mortal body became weaker and purged the effects of the chemotherapy in her body. 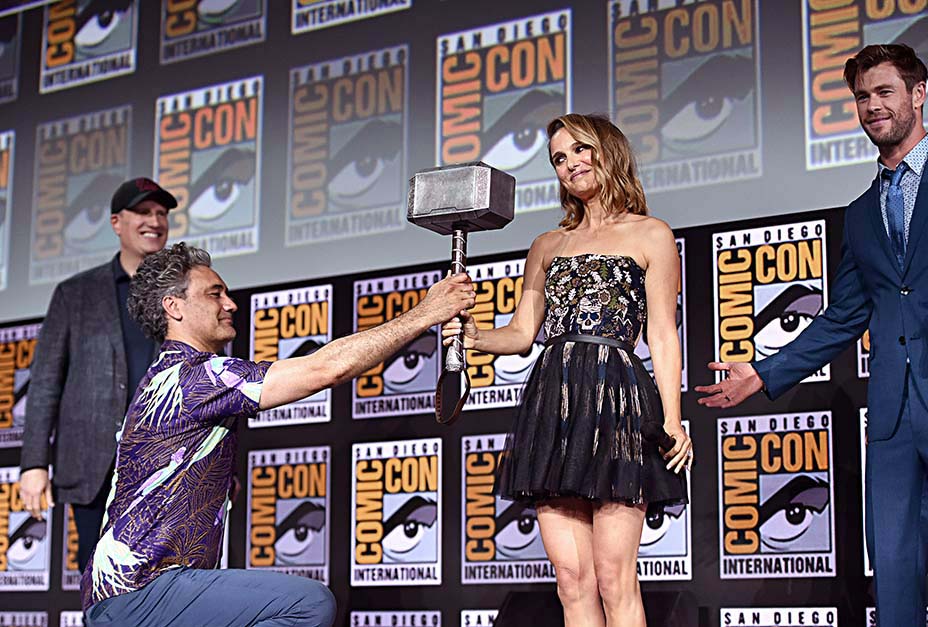 Through Thor and The Mighty Thor, Aaron and Dauterman explored what it meant for an atheist to become a god, for a woman to take on the patriarchy of Asgard, and for her to consider one’s own suffering and mortality within the context of the Ten Realms. The decision to make Thor a woman of course proved controversial to some less forward-thinking comic readers, as did the decision to make Thor more than just a name, but a title. As Aaron wrote following the character’s debut, “This is not She-Thor. This is not Lady Thor. This is not Thorita. This is THOR. This is the THOR of the Marvel Universe, but it’s unlike any Thor we’ve ever seen before.” And that promise was delivered upon with Jane Foster becoming a member of the Avengers, channeling the storm with Mjolnir in way expressly different from the Odinson, ending the Asgard/Shi’Ar War, and defeating the Mangog in order to save the universe. And she did all of these things not only with her god-given powers but through asking herself if she was truly doing enough, and then doing more. Jane Foster’s time as Thor is one of modern comics’ greatest epics, and while that tenure is over, with Foster having since become the new Valkyrie during the War of the Realms (2019) event, she is still carrying a solo title and proving to be far more than the love interest she was once relegated as.

Waititi, who previously revitalized Thor in Thor: Ragnarok and assisted with his characterization in Avengers: Infinity War and Endgame, revealed that Thor: Love and Thunder would be inspired by Jason Aaron and Russell Dauterman’s Eisner-winning run. To that point, Portman lifted Mjolnir, confirming that she would in fact assume the mantle of Thor in the film, alongside Hemsworth’s Thor Odinson.

Marvel Studios head Kevin Feige told The Hollywood Reporter after the panel that Waititi had been reading the run while making Ragnarok and had convinced Portman to join the new movie in just one meeting.

It’s unknown if Jane’s cancer will factor into the storyline, if she’ll face down the Mangog or if Valkyrie’s (Tessa Thompson) quest for a Queen implies Foster’s Thor will be her love interest, but there’s little doubt that Portman will get to explore sides of Foster that we haven’t seen on film before as the Goddess of Thunder. Portman’s presence in the MCU should have always been a bigger deal than it has been, and now, by way of Love and Thunder, she’ll be able to lift a role she has always been worthy of.

The Promise Behind Marvel's Phase 4 Slate