When the Hollywood rumor mill began churning out reports that Quentin Tarantino’s ninth film would be set in Los Angeles in 1969 — and center on Sharon Tate and the Manson murders — the director’s fans (and critics) naturally assumed that his next movie would be gruesome and irreverent, likely incorporating some revisionist history just like his previous best-picture-nominated films Django Unchained and Inglourious Basterds. While it certainly doesn’t skimp on those familiar Tarantino qualities (particularly in its third act), Sony’s Once Upon a Time in Hollywood is much more emotional and sweeter than any Tarantino film before it.

Following Rick Dalton (Leonardo DiCaprio) and Cliff Booth (Brad Pitt), a fading Hollywood actor and his stunt double turned driver, respectively, Once Upon a Time serves as a love letter to a time of great change within the film industry and American culture. With Manson girls — chief among them Pussycat, played by Margaret Qualley — dumpster-diving off Hollywood Boulevard and Sharon Tate (Margot Robbie) moving in next door to Dalton, the film offers a colorful and nostalgic look at a long-lost era. But as producer Shannon McIntosh explains to The Hollywood Reporter, Tarantino’s latest (which picked up 10 Oscar nominations) offers his own hopeful vision of Hollywood — a stark contrast to the dark and violent reality of the Manson murders, which changed the cultural climate forever.

You’ve worked with Quentin Tarantino for years, all the way back to Pulp Fiction. What stands out about this particular film?

Every movie you make with Quentin is special. It’s such a personal, wonderful experience for everyone, all the crew. But I think back to when I read [the script] with trepidation, wondering where it was heading, knowing a bit about the subject matter. You always wonder until you get [to the end], even though you couldn’t imagine Quentin making that other movie. The whole journey has been magical. They’re all great journeys, but this one was something really special because it’s such a personal story for Quentin.

How is Tarantino as a collaborator when it comes to actors on set, the craftspeople and even someone in your role?

People have this vision of him as an auteur, [one who] wouldn’t allow anyone to give their input and suggestions. But when you read his scripts, so much detail is on the page; everyone’s job becomes really clear on what they want to do. He absolutely allows you to bring your talent and your skills to the table. For example, we thought we wanted to shoot it in 70mm, but as Quentin and [cinematographer Robert Richardson] talked about the different processes and the looks, it didn’t seem the right way to go. For the most part we shot 35, a little bit on 16 and even some on Super 8. But that was Bob bringing to Quentin what he really thought would be best for this movie that would take place in 1969, but also jump back to the backstory of Rick Dalton. [Production designer] Barbara Ling also grew up in L.A., so to listen to the two of them talk about their stories and growing up here … I mean, there’s so much of Barbara that he allowed her to bring to the table. But [everyone is] still really informed by the script. 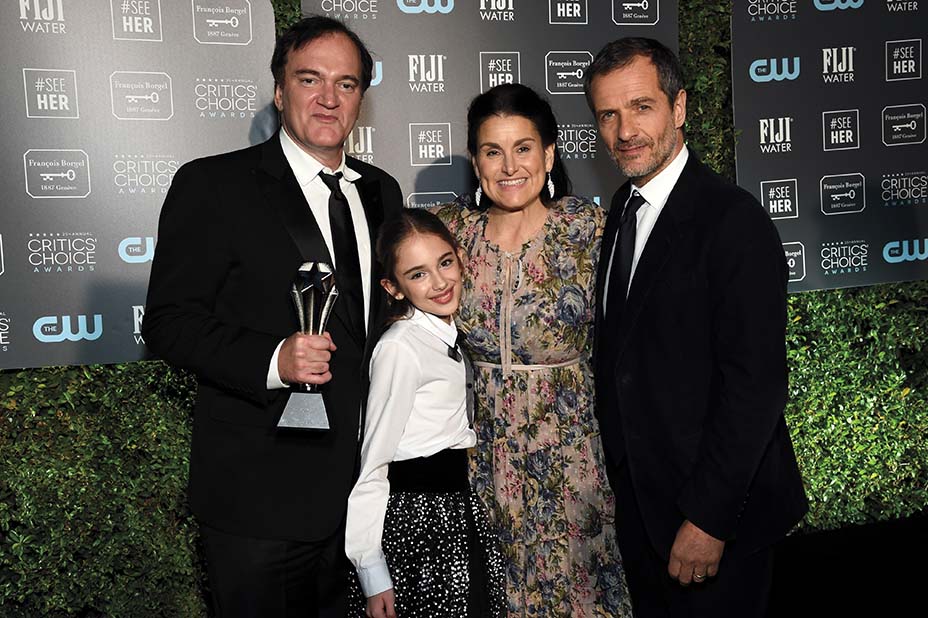 It’s a very nostalgic movie. What do you think it has to say about Hollywood in 2020?

1969 was a great year for change in the industry, and for the world at large. And we’re kind of back to those things now. There’s the theatrical experience versus the streaming experience. There are so many methods for content, and so many of us still really love the cinematic experience of going to the theater and seeing the movie with a collective group. We’re lucky that filmmakers like Quentin can still do that. So it is a changing time. And then obviously the world … it does feel appropriate for the time now, how we all look at what’s happening with our lives and take stock of what’s important.

The film incorporates many archival elements to re-create the world of 1969 Los Angeles. How did you assemble all of those elements for the film?

When we were location scouting around Los Angeles, we would play the air checks [recordings of radio programming] that we had gotten from [Los Angeles station] KHJ. It has such a presence and is a character within the movie. Quentin remembered the different commercials and the songs that were playing as he was [riding around L.A. and] looking around at all the buildings and marquees. KHJ adds to the tapestry of what’s really special to Quentin about his childhood, and that makes it so personal.

There was a treasure chest of [film, TV and radio clips] we thought could never be found. We transferred so many film formats for this movie, from 8mm to ¾-inch, to different sound formats. We were constantly calling people [and asking], “Do you have these machines? Can you actually help us transfer this?” All of these different clips created the tapestry of the movie, and people moved heaven and earth so we could get these things into it. 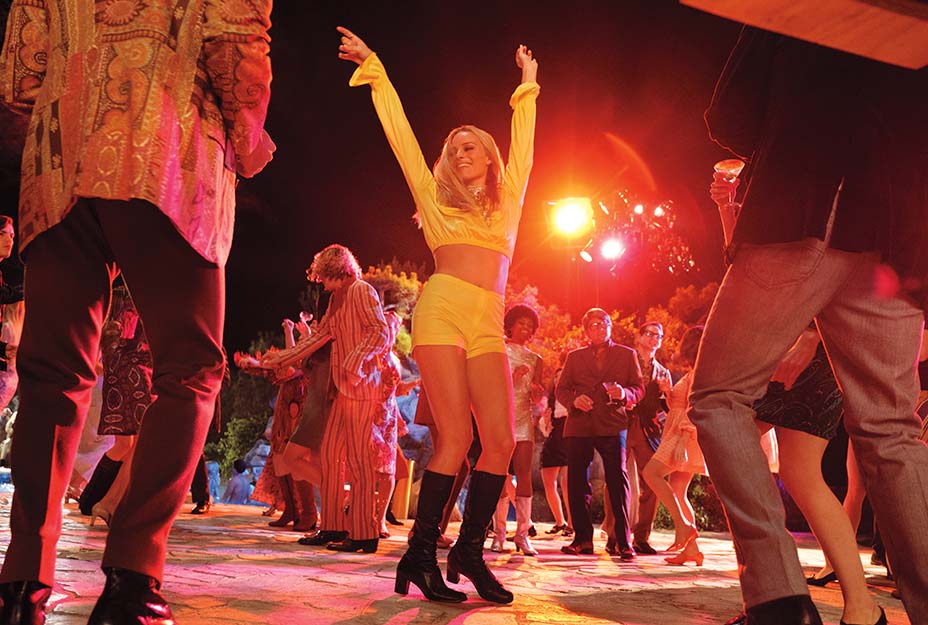 There was some controversy about the limited dialogue Margot Robbie had to work with to play Sharon Tate. What about her performance do you think transcended the number of lines she got to say?

Thank goodness we could get Margot Robbie with her schedule. The movie is about Rick and Cliff; Sharon is the next-door neighbor to Rick, and Margot was that perfect light and goal for Rick and for what he wanted. She lights up the screen in whatever she does — and I think she lights up the screen [in this film] in a way that we haven’t seen before. Many people have tried to do a Sharon Tate movie, and some have [succeeded]. What was really special about this is that [Sharon’s sister] Debra Tate became our partner. When she first heard about it, she wasn’t too happy. We reached out and embraced her — we wanted her to know that [the film’s goal was to portray] her life, not her gruesome death. Margot’s performance, her lightness and sweetness, is exactly how we want to remember Sharon Tate. And Debra could not be more thankful for how we can now think of Sharon. It’s easy to be a hater, to say she should have had more dialogue, but that wasn’t really what the movie was supposed to be.

Is there anything new you learned about Quentin Tarantino while making this film?

It’s been wonderful watching Quentin on this journey, because [while in production] he got married, he’s now expecting a child, he’s going through these next steps in life. He’s always been a loving person, but now that he’s entering fatherhood, I think it’s all hitting him. This is his once-upon-a-time fairy tale, and it brings me to tears every time I see it. You wish this is how it could have happened, and you’re also so happy for Rick Dalton and Sharon Tate and the hope Quentin has given them at the end of the movie. Maybe that’s new for fans of Quentin Tarantino. He’s really an emotional person like the rest of us. I already knew that part of him, but now maybe the rest of the world knows that, too.