“Sometimes dead is better,” but sometimes a resurrection is just what the good doctor ordered. Such is the case for this weekend’s release, Pet Sematary, based on the 1983 novel by Stephen King. Directed by Kevin Kolsch and Dennis Widmyer, who previously impressed horror fans with Starry Eyes (2014), the Paramount adaptation makes significant deviations from King’s novel and Mary Lambert’s beloved 1989 film. Those who were lucky enough to avoid the second trailer likely had a surprise in store for them when they saw the film in theaters, but for the rest of us, we were let in on a very significant change. Despite that annoying marketing decision for the spoiler adverse, that second act switch pans out for a narratively different third act that’s sure to leave fans of King’s novel, and Lambert’s original adaptation, debating.

The works of King are no stranger to having their narratives and characters altered, sometimes drastically so. We’ve seen the high and low points of King adaptations, and the separation by way of audience reception usually falls on how well the filmmakers stick to the source material. But sometimes, this ability to stray from the source material creates a unique experience that provides a thematically rich offering that can comfortably sit next to the original text. The first adaptation of King’s work, and what remains in my opinion the best, Brian De Palma’s Carrie (1976) concludes with a very different third act and omits the courtroom narrative of King’s book. Misery (1990) and The Shawshank Redemption (1994) both offer minor changes, hobbling instead of amputation and making Red a black man instead of white, that still result in works that feel true to their respective novels. Even It: Chapter One (2017), the highest grossing horror movie of all time, employs significant changes from the book, not least of all shifting the timeline up from the ’50s to the ’80s, and omitting a sexual act that carries thematic weight in the novel but would have felt gross, archaic and unnecessary in the film. Despite those changes, It still manages to capture the tone of the novel, the friendships, the fear, and ultimately the feeling of Stephen King.

On the other side of that, there are works like The Running Man (1987) and The Dark Tower (2017) that, even if there’s some enjoyment to be found in them, feel so removed from the pages of King and what he was trying to say, one wonders what was the reason behind adapting them in the first place. Perhaps most interesting are those adaptations that while good, even great, films lose the themes of the novels in order to land on a different point altogether. Stanley Kubrick’s The Shining (1980) is of course the most famous example of this, and one of the very few adaptations King has ever spoken negatively about. The Shining is a great film, but a lesser King adaptation because it trades Jack’s struggle with addiction for the overt madness of Jack Nicholson that narratively has more to do with Native American legends and the “white man’s burden” than it does with domestic inadequacy. Another such film that loses sight of its source is Cujo (1983), which remains impressive until the very end where Donna’s (Dee Wallace) young son lives instead of dies as he does in the novel. While the novel ultimately hit home on the effect of marital affairs and divorce on young children, and parents’ inability to protect them from their own decisions, the film fails to hold anyone accountable, and the killer dog attack feels more like chance than allegory

Most authors who are lucky enough to have their novels and stories turned into films and television series find their works put through the wringer. But the works of King, perhaps because of how frequently they manage to capture the zeitgeist and become pop culture phenomena, seem more ingrained in our memory. As a result, the adaptations have more to prove when it comes to capturing King’s shadow-tinged Americana. So where does Pet Sematary and its changes fall within the graph on King adaptations? It’s a lot closer to Carrie and It than it is The Running Man or The Shining.

As much as I love Lambert’s adaptation, Kolsch, Widmyer and screenwriters Jeff Buhler and Matt Greenberg manage to get closer to the oppressive weight of the novel than the 1989 film. This isn’t to say one film is better than the other — they’re about equal in quality, though for different reasons. While the first adaptation existed in this space of heightened emotions and grand stage acting, the 2019 film is more subdued, quiet, and in tune with death. Death doesn’t come as a surprise here, it’s an inevitability. So when it comes the film’s major deviation, it’s not about who dies, but rather the fact that we all die. This change in the new Pet Sematary that we’ve been circling around is that it is Louis (Jason Clarke) and Rachel Creed’s (Amy Seimetz) daughter Ellie (Jete Laurence) who meets her untimely and tragic death instead of their son Gage (Hugo Lavoie). 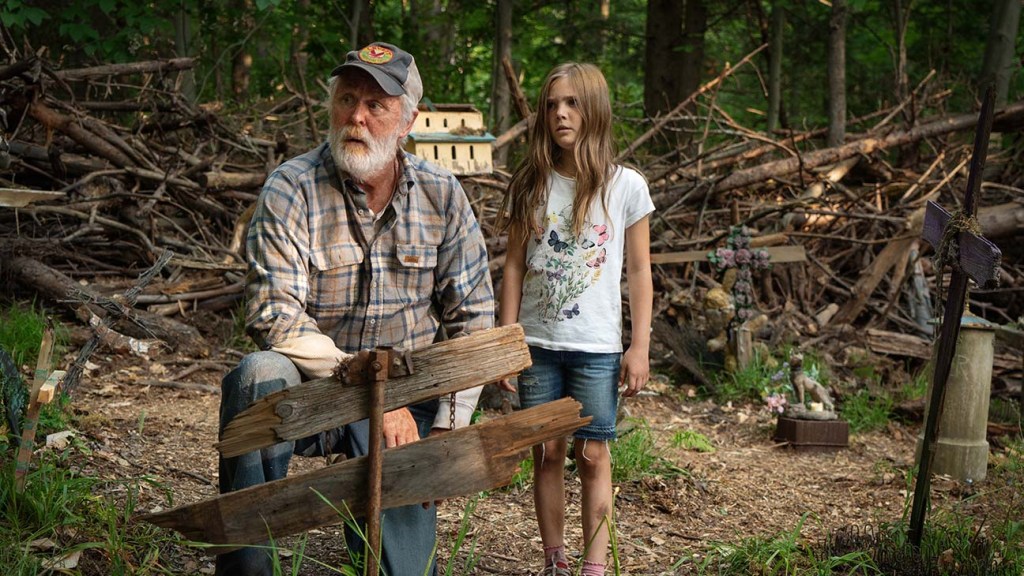 This change allows for the resurrected Ellie to give audiences a different kind of jolt than Gage, played so memorably by Miko Hughes in Lambert’s film. Not to dismiss the eeriness of a murderous toddler, but nine-year-old Ellie has a vocabulary and presence, a self-consciousness that is more interesting to watch onscreen for an extended time. The change from Gage to Ellie also gives us greater insight into Louis’ motivation to use the sour burial ground again, after bringing the family cat, Church, back. The novel, by way of the medium, gives us more insight into Louis’ headspace, but film necessitates a kind of shorthand, one that is arguably more effective when we can see the relationship Louis has with Ellie. Ellie’s loss doesn’t just hurt because it’s innocence lost, but because she was a fully developed character in a way that Gage could never be. When Ellie comes back, she’s not just utilizing the limited vocabulary we would have seen from Gage, but the full range of a nine-year-old with a clear and established personality, and thus can manipulate those facets against Louis.

Ultimately, these changes, and the further changes that happen in the third act, don’t change the themes of King’s novel. We’re still facing a family struggling to deal with death, their questions of faith and what happens when something as seemingly immortal as a lineage is wiped from space and memory. The burial ground beyond Pet Sematary isn’t just a tool in the film, it’s an addictive force, a glimpse at the other side of a barrier and evidence that there is something beyond death, even if that something is unpleasant. We see this addiction best through Jud Crandall (John Lithgow), who’s a bit more haggard and broken than Fred Gwynne’s memorable performance. There’s an intoxication created by this burial ground, one that leaves the living strung out and craving the next burial that will bring them closer to their turn in the ground.

The changes that occur in Pet Sematary allow for a different experience than reading the novel or watching Lambert’s film, which ultimately feels like what should be the goal of repeated adaptations. It’s this factor that allows Kolsch and Widmyer’s Pet Sematary to feel like a fresh adaptation rather than a remake. The biggest misstep this film could have made isn’t about who dies and when, but in trying to repeat the beats of a film we already have. Take Carrie (2013), for example, which stayed truer to De Palma’s film, right down to similar shots, than it did to the novel, and the result was a film without a voice. Kolsch and Widmyer took a known story and made it unknown again, a space in which anything could happen in between the unmovable pillars of life and death. Pet Sematary has a voice, one that isn’t King’s, but one that digs its own space to bury us.