When writer-director Peter Hedges was casting Ben Is Back, he had no trouble at all persuading Julia Roberts to play the female lead. She loved the idea of portraying the long-suffering mom of a charismatic liar and recovering drug addict who busts out of rehab to spend Christmas with his family. But to star opposite her as the troubled young son, Roberts felt there was really only one person right for the role. That’d be one of the most-buzzed-about young actors in Hollywood — Lucas Hedges, the director’s son — and he didn’t want anything to do with the movie.

“I don’t like my parents watching me at the monitors,” says the 21-year-old Lucas. “It makes me self-conscious. And the thought of being directed by my dad only amplified that discomfort.”

Ultimately, of course, father and son found a way to work through the awkwardness, and the result, which debuted at the Toronto Film Festival on Sept. 8 and opens wide Dec. 7, could turn out to be a triumph for them both. For Lucas, who’s been on a hot streak — earning an Oscar nomination for 2016’s Manchester by the Sea and critical kudos for 2017’s Lady Bird and Three Billboards Outside Ebbing, Missouri — Ben Is Back is a chance to boost his career to an even higher orbit. And for Peter, 57, who in recent years has been stuck in a career slump, it’s already shaping up as a comeback. 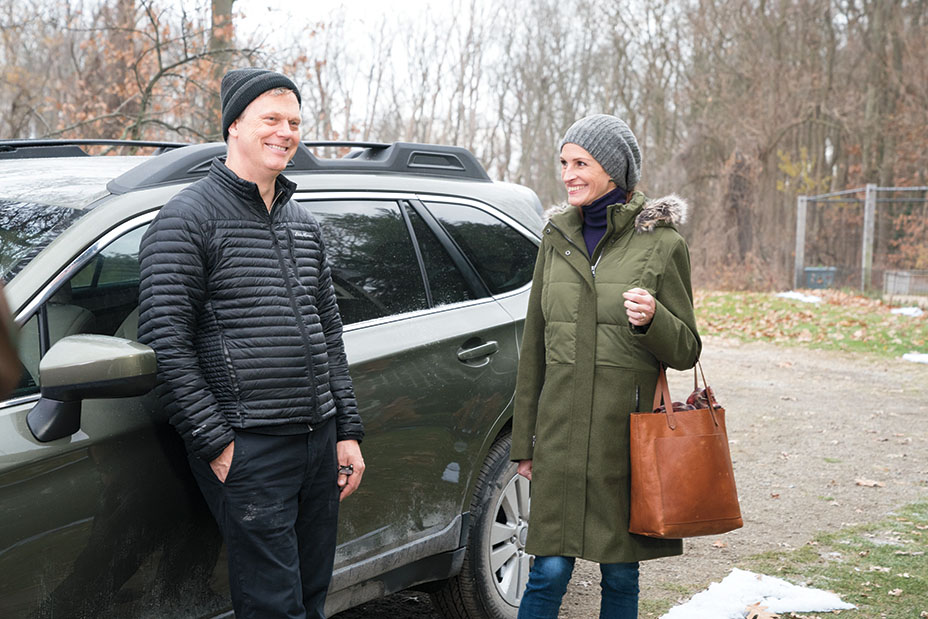 A couple of decades ago, Peter was one of the more buzzed-about, in-demand writers in Hollywood, adapting 1993’s What’s Eating Gilbert Grape (starring a young Johnny Depp and Leonardo DiCaprio) from his own novel and 2002’s About a Boy from a book by Nick Hornby. But after trying his hand as a director — with 2007’s Dan in Real Life and 2012’s The Odd Life of Timothy Green — the elder Hedges saw his pen dry up. “Everything was taking twice as long,” he says of his struggle with writer’s block. “I was losing my confidence.”

Around the same time, he lost a close friend to a heroin overdose and started thinking more and more about addiction, a subject he already was personally familiar with (his mother, an alcoholic, abandoned the family when he was 7). Then, in 2014, Philip Seymour Hoffman — an actor Hedges met in the 1990s at a New York theater retreat and admired greatly — also died of an overdose. Hedges’ interest in the subject spiraled into an obsession. “My wife would look at my search history on the computer” — he’s married to actress/poet Susan Bruce — “and it would be page after page, video after video on the heroin and opioid epidemic,” he says. 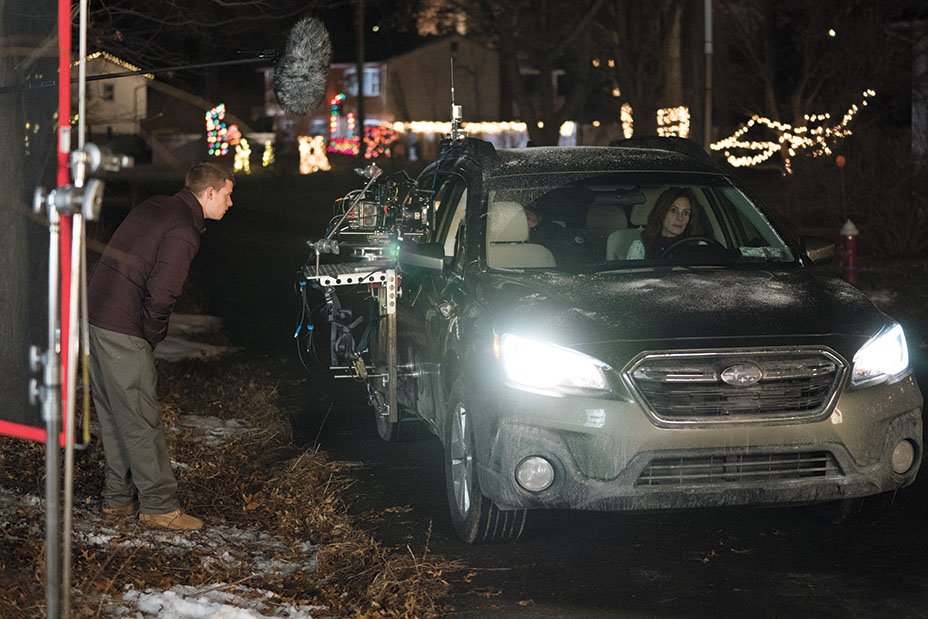 Hedges tried counseling to deal with his block, but all the therapist told him was that he “wasn’t telling stories I needed to tell.” Desperate, he took more extreme measures; in February 2017, he signed up for a playwriting workshop. It was filled, he says, with “people [young] enough to be my children.” But it was there that he figured out how to break the block and deal with his fixation with addiction simultaneously. “I wrote the first 10 pages of Ben Is Back in that workshop,” he says. “I felt like, ‘Wow, maybe I have something here.’ “

After he wrote about 100 more pages, Hedges sent the script to producer Nina Jacobson, a former Disney exec who worked with him on Dan in Real Life. At the time, with opioid addiction making frequent headlines, the subject was on Jacobson’s mind as well — her son’s best friend was in recovery for heroin abuse — and as she paged through the script on a flight, she found it “really hit home.” When her plane landed in L.A., Jacobson’s first call was to Hedges. “I want to produce this film,” she told him. “You’ve written a page-turner.” 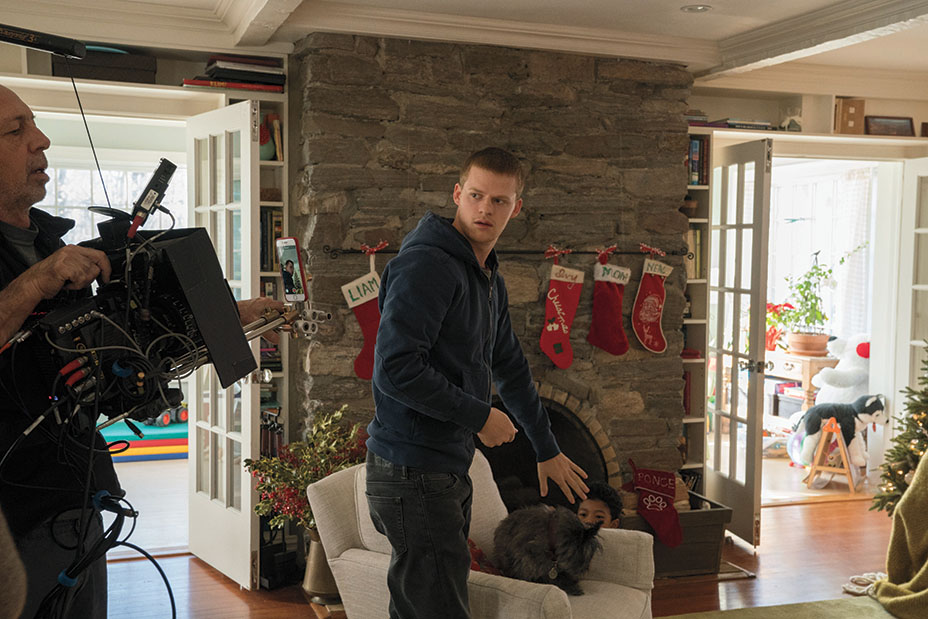 What followed was “the fastest journey I’ve ever taken from script to screen,” recalls Jacobson. “We dove right in and figured out a production plan.” Before they knew it, they were casting. While he was writing the script, Hedges had seen Roberts in 2017’s Wonder — she plays a mom to a boy with a facial deformity — and remembered “thinking how good she was but how she deserved to have so much more to do.” It was CAA’s Kevin Huvane and Bryan Lourd — the agency reps both Hedges and Jacobson — who suggested Roberts might be a good fit, and they sent her the script.

Roberts loved it. “It was the scale of it,” she explains. “When you think about the opioid epidemic in this country, it’s so overwhelming to try to make sense of. And I loved that the scale of this was very small, very contained. It manages to deeply humanize this huge crisis, make it about just this one family on this one day.” 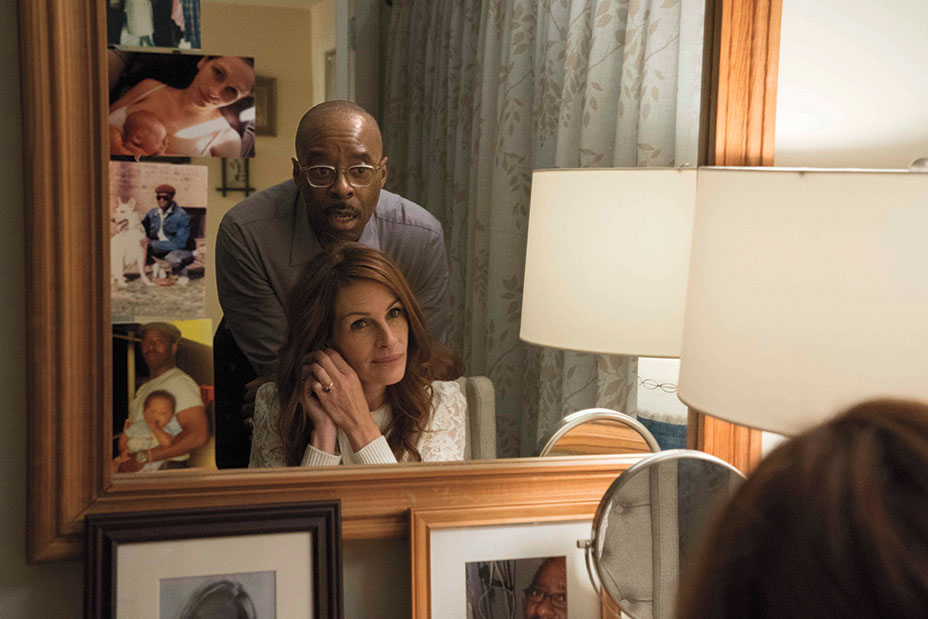 Roberts had a December opening — a break in her shooting schedule for Homecoming, her new Amazon series — which worked out perfectly since Ben Is Back takes place entirely over one Christmas Eve. But the 48-year-old star had one condition: She wanted Lucas to play Ben. “Usually when I read a script I unconsciously cast it, and reading a script written by Peter Hedges about a 20-year-old young man, I immediately cast Lucas Hedges,” she says. “He was exceptional in my mental reading.”

Peter Hedges knew it was going to be tough getting his son on board and tried to break the news to Roberts gently. “I said, ‘First of all, Lucas doesn’t ever want to be in a film of mine after his experience with Dan in Real Life. His one line in that film got cut.’ ” That scrapped line from 10-year-old Lucas’ debut (it was the word “Hey”) wasn’t the only reason he was reluctant to star in his dad’s project — he also was set to do an off-Broadway play and wasn’t sure he could fit the movie into his schedule. But after initially turning it down, he started hearing things about the script from his actor friends, who all were surprisingly eager to land the part. “A lot of people thought it was really good,” Lucas remembers. “So I was like, ‘Hey, can I read it?’ And [after reading it] I felt like, ‘Wow, this is maybe my favorite part I’ve read in a long time.’ “ 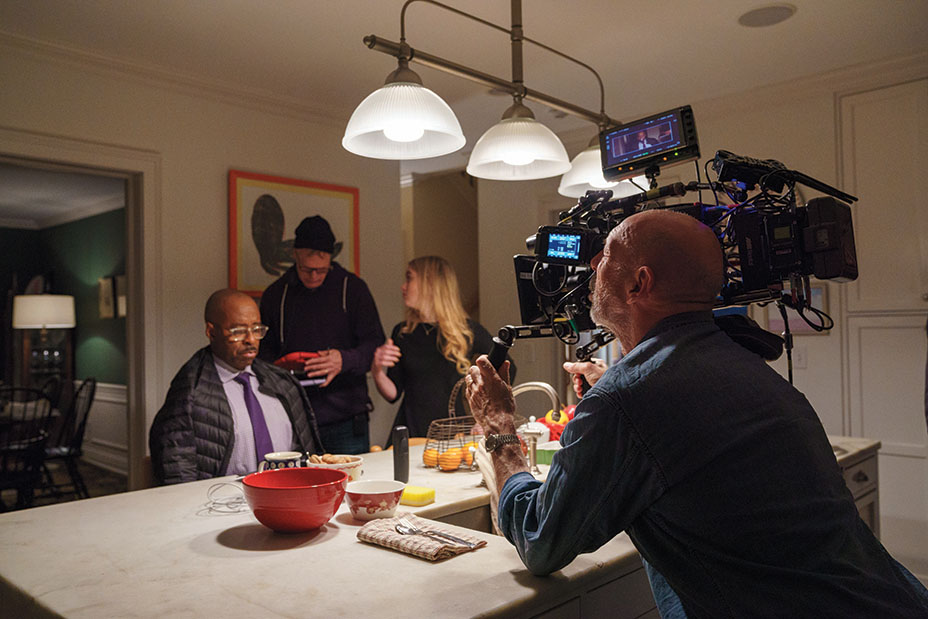 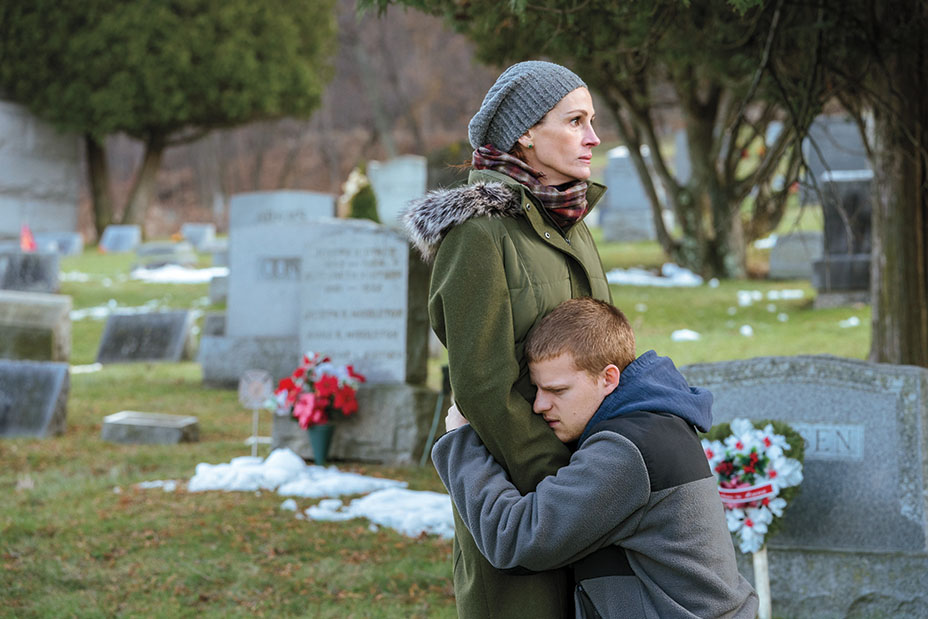 Before he signed on, however, Lucas laid down a few ground rules. Talking on the phone from the set of Boy Erased — his other awards hopeful this year — the son made his father promise to look at him as an actor, not his offspring, and “formalize his relationship” as his director. While shooting the movie, for instance, Lucas would call him “Peter” and not Dad. “That was huge,” Lucas says. “He needed to be my director, and I needed to see him less as my dad and more as somebody who just believed in me.” From Peter’s point of view, the negotiations were awkward at first, but “that quickly fell away. We were just two people talking about work.”

Once Lucas finally agreed to star, Roberts suggested they spend some time together. She invited him to Thanksgiving at her house in Malibu, where he mingled with Roberts’ husband, Danny Moder, and their three young children. “My whole clan really wrapped our arms around him,” Roberts says. “It benefited not only our work, but it benefited my family, too. When I was 3,000 miles away, they knew exactly who I was with.” 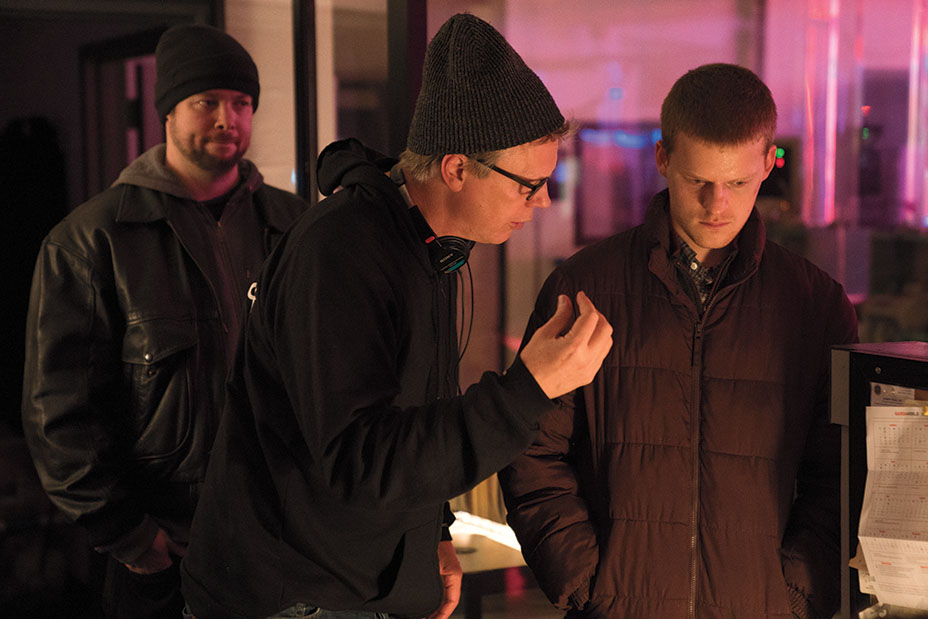 As the rest of the core cast was being filled out — Kathryn Newton, who’d worked with Lucas on Lady Bird and Three Billboards, won the part of younger sister Ivy, while Courtney B. Vance was cast as stepfather Neal — financing came together when Black Bear Pictures was slipped a script during the Toronto Film Festival. The production company (makers of 2014’s The Imitation Game) agreed to co-bankroll the film’s $13 million budget with 30West. By December 2017, principal photography was underway in upstate New York, where the temperatures dropped to frostbite-inducing levels. “The thing I associate with this production is the cold,” says Jacobson. A weather system called a “bomb cyclone” at one point required a quick evacuation and temporarily shut down production. But the biggest headache of the shoot was filming a long sequence inside a local shopping mall. Says Jacobson, “You’re taking one of the biggest movie stars in the world into a mall and shooting when people are doing their Christmas shopping.”

After wrapping in late January, Peter disappeared into postproduction with longtime editor Ian Blume and, later, composer Dickon Hinchliffe, who scored the film, uniquely, with the ukulele. But when the director finished and returned to his home in Brooklyn Heights, he discovered the film had irrevocably altered one gigantic part of his life. His son wasn’t there. “The day after we got home, he moved out,” says Peter, sounding wistful. “I used to see him a lot, you know, in the mornings, at the end of the day. We ate meals together. Now he lives in Manhattan with his older brother [who is in finance]. In a way, I’ve been fired as his parent. But I’m occasionally rehired as a manager.”