That Warner Bros. is developing a Plastic Man movie perhaps shouldn’t come as quite the surprise that it does; after all, not only did the DC superhero headline his own ABC animated series for a couple of years, but he’s also the perfect choice to give Warners something that it never even knew it needed: A comedic foil to the rest of the DC cinematic universe.

This wouldn’t be a new role for Plas, as the character’s often called for short. Unusually for a superhero — and especially one whose origin involves having been a criminal who was left for dead by his gang after being exposed to some mysterious chemicals — Plastic Man has traditionally been a comedy character throughout his 75-plus year career. Indeed, his 1970s animated series underscored this appeal by being called The Plastic Man Comedy/Adventure Show. (The series ran from 1979 through 1981; he’s also appeared in other DC animated shows, including Batman: The Brave and the Bold and Justice League Action.)

Although the trait has been present since he debuted in 1941’s Police Comics No. 1, two comic book runs exemplify the comedic potential in Plastic Man as he prepares for his big screen spotlight: The short-lived 1980s run accompanying his animated series, which appeared in Adventure Comics and scattered issues of other titles, and the early 2000s Plastic Man series by acclaimed cartoonist Kyle Baker. While both took advantage of the cartoonish nature of the character, they took very different approaches to what could be done beyond that.

The 1980s run, written by a variety of writers including Len Wein and Martin Pasko but traditionally drawn by Joe Staton, followed the lead of the animated series by placing Plas and sidekick Woozy Winks as detectives investigating any number of cases that included a number of digs — subtle and otherwise — at public figures or familiar targets of the day. Easily digestible for the younger readers the stories were aimed at, they nonetheless had enough to keep older readers amused, as in the story from 1981’s World’s Finest Comics No. 273, in which Brooke Shields’ 1980 Calvin Klein ad is parodied alongside an appearance by talent agent Pete Ophelia of the agency Humbert, Humbert, Humbert and Polanski. (In the same story, another model has the name Anne O’Rexia.) The stories were a mix of broad comedy and Dick Tracy-esque villains and surprisingly sly commentary for the grown-ups in the audience, with each episode playing to a wide audience. 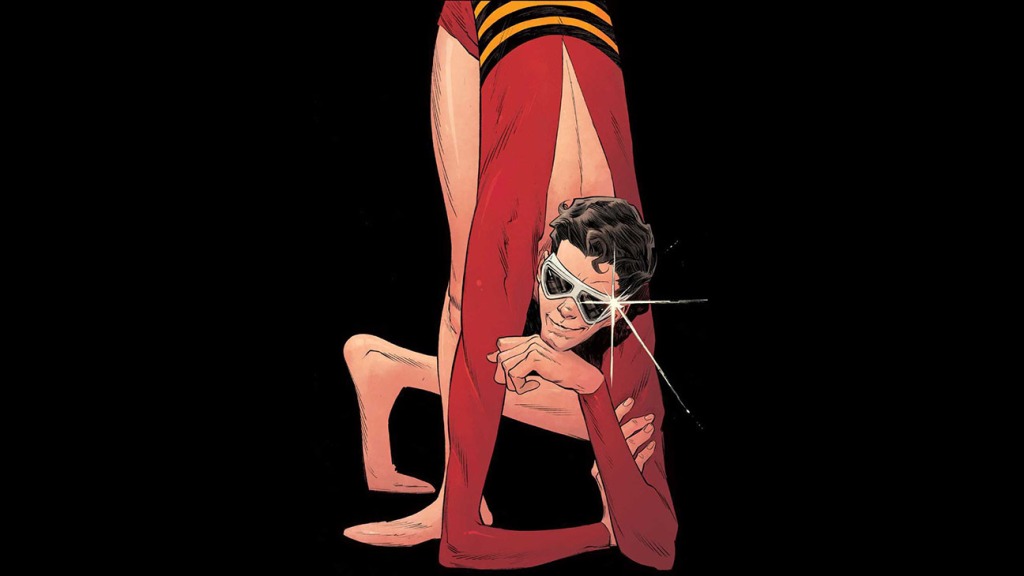 Baker’s 2004 series, by contrast, initially launched with far less of the social commentary, preferring to focus on sight gags and slapstick that seemed as much a tribute to Chuck Jones and Looney Tunes classics as anything else in mainstream comedy. As the series headed into its final half-year, however, the focus shifted and the series became more of a parody of not just contemporary culture, but comic book culture, with the parody of the latter surprisingly cutting. (The final issue of the series, 2006’s No. 20, is essentially Baker making fun of the storylines taking place in contemporaneous DC comics of the period, with Superman showing up to complain to Wonder Woman, “You and Bruce never validate my feelings! And that hurts me!”)

If all of this — a cartoonish, slapstick appeal combined with satirical, often savagely so, asides — sounds familiar, it should; although it’s not a direct parallel, Plastic Man doesn’t just have the potential to be DC’s answer to Deadpool, he’s a character who was essentially offering a variation on Deadpool’s schtick years before the latter character even existed. Both characters have the criminal past — although in Deadpool’s case, that’s technically his present, as well as his past — and the smart mouth that gets them into trouble. And, while Plastic Man doesn’t have the mutant healing power of Deadpool, he has something far better at least when it comes to the visual medium of cinema: the ability to stretch and change shape into whatever he assumes, as long as it’s the same color as he is.

Whether or not Warners decides to go the full Deadpool route complete with R rating is something that remains to be seen, but if the studio is still looking to shake up the perception of the DC properties in the wake of Batman v Superman and Justice League, there would be worse ways to go — but, perhaps, no better character to go with.

Plastic Man Movie in the Works at Warner Bros. (Exclusive)