Summer movie season is a space typically reserved for the dominance of superhero stories, costume clad beings with incredible power who attempt to shape the world for the better against often garish villains. Yet, summer 2020, as a result of America’s failure to slow the COVID-19 pandemic, has been a summer without superhero movies. It’s fitting then that in the final days of summer 2020, a season that has been defined by the failure of government leadership, and the rise of the Black Lives Matter movement, that we find ourselves with a superhero film that feels uniquely situated for our current predicament.

For movie buffs who have felt the void left by a lack of summer blockbusters, Netflix has certainly lessened some of that emptiness with the spectacle provided by Extraction, Da 5 Bloods, and The Old Guard. This weekend the streaming service continues its recent streak of films that scratch the blockbuster itch with the release of Project Power. Directed by Henry Joost and Ariel Schulman, who made their marks on the Paranormal Activity franchise and directed the surprisingly thrilling Nerve (2016), and written by Mattson Tomlin (The Batman), Project Power explores a world in which a pill unlocks superhero powers within its users, specific to their individual DNA. The catch is that the user doesn’t know what power they’ll get, leading to some disastrous and gory transformations. This concept of superpowers via recreational drugs isn’t entirely new. Marvel Comics’ readers may be familiar with MGH (Mutant Growth Hormone) and IGH (Inhuman Growth Hormone) which has a similar effect. But what sets Project Power apart is how it examines this drug within the context of the urban environments of contemporary America.

At the center of Project Power are a military veteran, Art (Jamie Foxx), who’s looking for his kidnapped daughter, Frank (Joseph Gordon-Levitt), an ex-cop trying to save New Orleans from the recent breakout of superpowered criminals, and the aptly named Robin (Dominique Fishback), a high-school student, and aspiring rapper, who deals Power to support her ailing mother and forms a friendship with the two men. While so many superhero stories taken place at the heart of large cities with seemingly endless resources, Project Power grounds us in the low-income areas of New Orleans, focusing on people who are still living with the damages caused by Hurricane Katrina and the government’s failed response to that catastrophe. But even in this unusual choice of setting, Joost and Schulman aren’t interested in condemning the projects, but lifting it up, allowing the film’s title to carry a double meaning. Robin’s neighborhood is viewed through a lens of urban beauty, assisted by cinematographer Michael Simmonds, and Joost and Schulman’s penchant for multiple perspectives through different camera lenses. There’s an artfulness to the graffiti and the way the street lights shine on the blacktop that give this area a sense of importance and personality that could stand alongside any comic book city, real or fictional.

It’s impossible to talk about the urban environment of Project Power without also considering the role that cops play within the community. Gordon-Levitt’s Frank does his best to be in Robin’s corner, looking out for her like an older brother, while avoiding the white savior trope. Frank, who has his own list of character flaws and is using Power, needs Robin just as much as she needs him. When looking at his role within our current climate it’s crucial that Frank isn’t fully allowed to be the hero Robin and New Orleans needs until he loses his badge. As we find out later in the film, the cops aren’t the key to restoring the power balance in the city, and are just another facet of a failed government system. Project Power allows its heroes to feel pride in their home without succumbing to unearned patriotism. Frank’s relationship with the police force, Robin’s role as a dealer due to the lack of health care for her mother, and Art’s military career, which he attributes to being a gifted fighter and acknowledges has the potential to be just another government system that chews up the poor and disenfranchised, are all reflections of an imperfect country with foundational ills. In Project Power truth and justice are lost ideals, and the American way isn’t something to aspire to, but break apart. 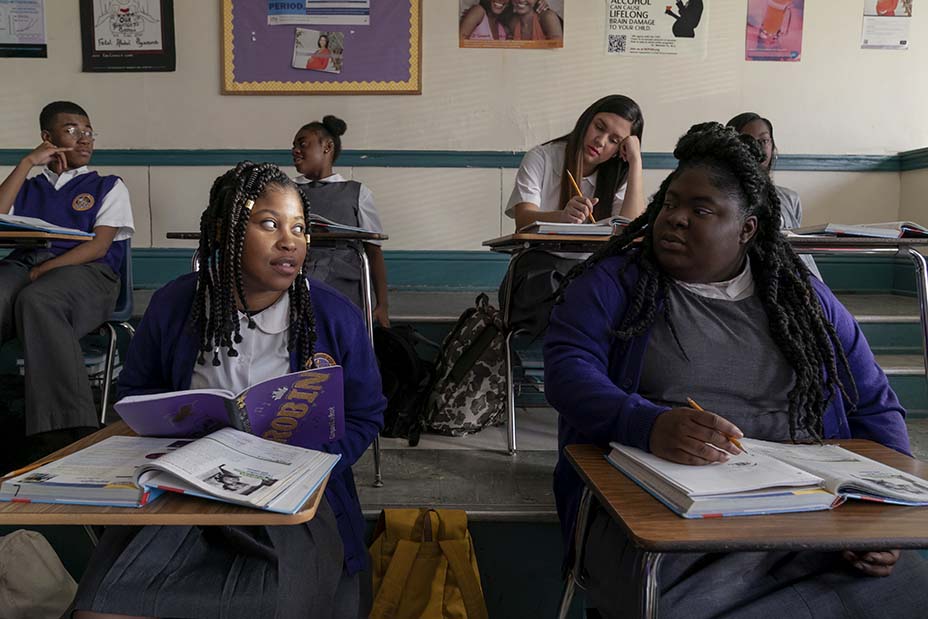 Despite the preoccupation with superpowers, Project Power, doesn’t follow the tropes of superhero cinema, not even the slightly more grounded ones like Unbreakable (2000) or Kick-Ass (2010). This isn’t a story that leads to people putting on costumes. There are certainly visual clues, like Art’s red jacket, Frank’s Saints jersey, and Robin’s sweatshirt, which shares the same color scheme as the Boy Wonder’s outfit, that all serve as uniforms. And Art even has a moniker, earned from his days in the military, The Major. But this is a world where becoming a superhero is impossible, where rising to become almost anything other than to meet your intended station in life is almost impossible because of the institutional systems in place. As Art says, the people who have the most to gain from the drug Power, are the people who already have power. The drug, billed as the next step for human evolution, isn’t a means for ordinary people to rise up, but for governments and heads of states to recruit armies for their own benefit. Low-income areas, like New Orleans, are controlled testing sites for Power, a chance for scientists to improve upon the drug, and for the wealthy and powerful to see a means through which they can retain their wealth and power by buying up cases of the pill. Yes, there are some stylish battles between the three leads and the government stooges who power-up in order to protect the investment of their employers, but the film makes it clear that the villains of this story are corrupt leaders, the same leaders who left New Orleans to fend for itself during Katrina. And those villains aren’t ones who can be entirely wiped out through a superpowered punch or energy blast.

Beyond a concern with corrupt government officials, Project Power, filmed in 2018, is also uniquely attuned to the Black Lives Matter conversation. Art’s search for his daughter, who the government has used to develop their drug, is reminiscent of Stephen King’s Firestarter. But the use of minorities and poor people as test subjects not only alludes to Henrietta Lacks, who is directly referenced in the film, but also the Tuskegee Project in which 600 impoverished African-American men were deceived into becoming part of a study into the effects of syphilis in 1932. The men — 399 who were already infected with syphilis and 201 men who did not have the disease — were promised health care and were assured they were receiving proper treatment for “bad blood,” a catchall term of the era for a number of health issues. The study continued for 40 years with the men not getting proper treatment, even after penicillin proved to be a viable antibiotic in 1947.

Project Power isn’t without its own tropes borrowed from action movies and cop stories, but as far as its placement within superhero cinema goes, it’s a good start in Hollywood’s ability to reckon with what superheroes and superpowers mean for those who need them most. In a summer without superhero movies and attentions devoted to the news cycle, Project Power is able to stand out in a way it might not have otherwise, and it delivers a clear message, rooted in America’s history, in an entertaining and easily digestible format.

'Old' and 'Pig' Star Alex Wolff on the Virtues of Nicolas Cage and M. Night Shyamalan