Paramount’s Sonic the Hedgehog, opening Feb. 14 stateside, seems to not be too different from other movies based on video game or animated characters — but it took a winding path to the big screen. The story follows Sonic (voiced by Ben Schwartz) as he’s mysteriously transported from his own world to ours, where his presence attracts the attention of the evil Dr. Ivo Robotnik (Jim Carrey). Helping the fast-running hedgehog evade capture and find a way home is Tom (James Marsden).

With built-in brand recognition thanks to nearly 30 years of hit video game titles and a couple of recognizable human stars, it seems like marketing the movie would be an easier sell. And the $45 million to $50 million opening weekend estimated by tracking indicates plenty of people are looking forward to it.

But the promo campaign for the film stumbled almost immediately out of the gate, as fans were disappointed in the first looks Paramount offered of the title character. That lead to delays in making changes and a marketing push that had to work to regain audience interest and approval.

A presentation by studio executives at CineEurope in July of 2018 was one of the first promotional events for the movie, preceding the start of the mass market campaign by a few months.

The first poster (by marketing agency BLT Communications), released in mid-December 2018, immediately spawned a number of raised eyebrows and questioning reactions. Sonic is shown backlit, crouched down and ready to start running. Criticism arose, in part, due to how muscular the character was drawn to be. That was reinforced by another promotional image that showed those ripped legs luxuriating by the Golden Gate Bridge.

The second poster arrived in late April at the same time the first trailer debuted. This one offers a much better look at Sonic in action racing up the side of a building while being chased by a handful of drones. Including the callout that the movie comes “From the producer of The Fast and The Furious” is likely meant to establish its action credentials. Another (by marketing agency BOND) released at the same time shows him running through a normal suburban street, while a third has the title character hanging out in one of his rings that seems to be opening a portal between San Francisco and Paris.

The first trailer that came out in April 2019 establishes the story takes place in our real world, not Sonic’s video game world. He’s somehow crossed dimensions, with the blackout that caused attracting the attention of Dr. Robotnik, who’s been enlisted by the military to find out what happened. Thankfully, Sonic is helped by Tom, who agrees to keep him hidden (as much as possible) and safe.

Reactions to that marketing material was swift, as people weighed in with their feeling the overly muscular design was off-putting. It lead to the creation of lots of fan art “improvements” and other snark being directed at the studio and filmmakers for getting it wrong. To Paramount’s credit, the studio leaned into how people were having fun with the first couple posters and promotional images, retweeting some fan art and posting a picture of Sonic holding up a sign asking, “Can’t a guy workout?”

The reaction to Sonic’s look was so strong and so negative that director Jeff Fowler took to Twitter to assure audiences there would be changes made before the movie was actually released. Making those changes was the reason Paramount later announced the release date was being delayed from November of last year to February.

Carrey weighed in on the delay necessitated by changes to the character in August of 2019 while on a TCA panel promoting his Showtime show Kidding, saying he understood why audiences reacted as they did but remaining neutral on whether that kind of power was a good or bad thing.

At some point all of that initial marketing material was erased from the official record by Paramount. The first trailer was taken down from YouTube and all posts on the movie’s Twitter, Facebook and Instagram accounts deleted. That lead to the campaign’s reboot in November of last year, about the time the movie was originally scheduled to be released.

With Paramount taking several months off to have the character redesigned to more closely resemble his video game incarnation, the studio relaunched the marketing in November of last year.

That relaunch included a new trailer (31 million views on YouTube) that told essentially the same story as the first. Sonic has come to Earth to escape the forces on his world that are always trying to steal his powers. He gets Tom to help keep him safe from Dr. Robotnik, but Sonic has a hard time laying low. That leads to lots of chasing and other action as he runs and runs to keep one step ahead of the bad guys.

A motion poster came next that has Sonic spelling out his own name in lightning left in his wake as he races around the streets of San Francisco.

To put out a message of a positive reception, Paramount released a “fan reaction” video bringing together snippets of people enjoying the new trailer. The video was an attempt by the studio to fully change the narrative around the movie from one of mistakes and poor choices to getting it right and giving the audience what it wanted.

With the campaign now in full swing, attendees of CCXP in December received an exclusive poster (by marketing agency Works Adv) that shows Sonic boasting of his speed by changing a speed limit sign.

Paramount started the “12 Days of Sonic” in mid-December, offering a series of sweepstakes and other promotions whose final prize was a trip for two to a Los Angeles screening. Smaller daily prizes included signed movie posters, a Sega Genesis Mini and more.

Wiz Khalifa released the video for the song “Speed Me Up” by him, Ty Dolla $ign, Lil Yachty and Sueco the Child. That video features footage from the film as well as the artists interacting with Sonic in an old-school, 16-bit video game-type environment.

TV advertising began in late January with spots like this, also used as promoted posts on social media and pre-roll ads on YouTube, that boiled the pitch down to one just selling fast-paced hijinks with Sonic and his human friends. A commercial that aired during the Super Bowl pre-game broadcast used football players and other athletes to talk about how fast Sonic was and how incredible his moves were before showing off movie footage.

Another spot explained more of the story but also featured Sonic comparing himself to Vin Diesel and telling Tom “It’s all about family,” something pulled out because this one was released after the first trailer for F9 came out. An exclusive clip given to MovieClips has Sonic trying again to convince Tom to help him.

The movie was screened for cast and crew along with other special guests at a “Blue Carpet” event at the end of January. There was also a press event in London two weeks ago with the cast and director in attendance.

For the Dolby poster, Sonic is shown relaxing on the hood of Tom’s police car, with the human holding his speed gun at the hedgehog uselessly.

Outdoor and online ads used elements of the key art, especially Sonic and Dr. Robotnik, to increase audience awareness and drive traffic to ticket sales. Promoted posts on social media were also meant to encourage ticket purchases when they went on sale and used short videos similar to those run as TV and pre-roll commercials.

A promoted Instagram filter added Sonic above the head of someone in a picture. Sponsored emoji on Twitter added a running Sonic to posts using #SonicMovie or #CatchSonic.

The Sonic Dash mobile game uses the same San Francisco setting as the movie and contains numerous references to and branding for the film.

Other promotional partners for the movie include: 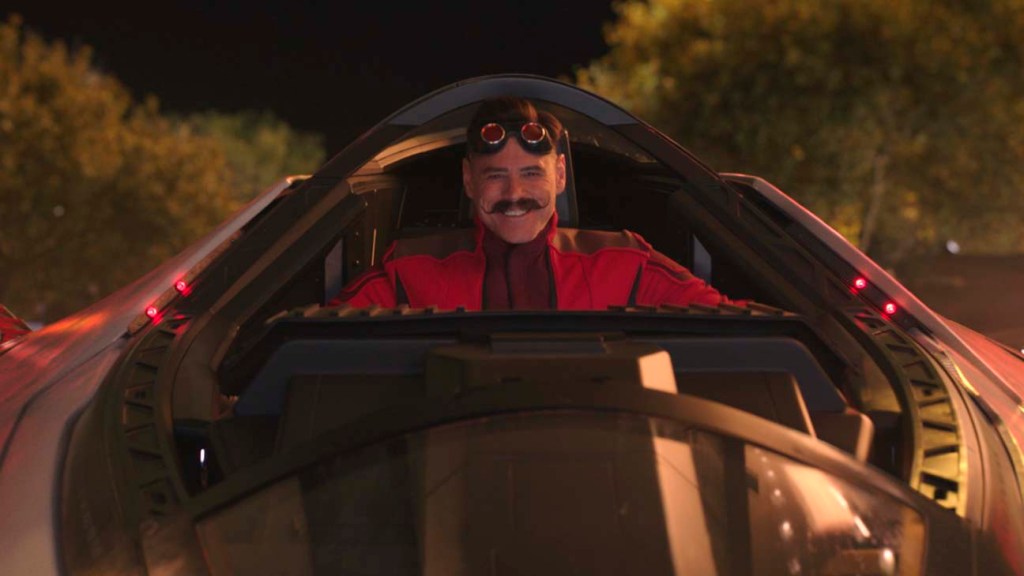 ? Puma, which put Sonic on a new collection of athletic apparel for all ages.

? Jack in the Box, which ran a series of sweepstakes during the Super Bowl promoting its Tiny Tacos, which were also featured in a number of promotions that included Sonic.

? Books-A-Million, which ran a sweepstakes awarding a Sonic prize pack as well as movie tickets.

? Bimbo Bakeries, which put movie branding on select products. A partnership with Fandango allowed people who bought four such products to get free tickets to see the movie. 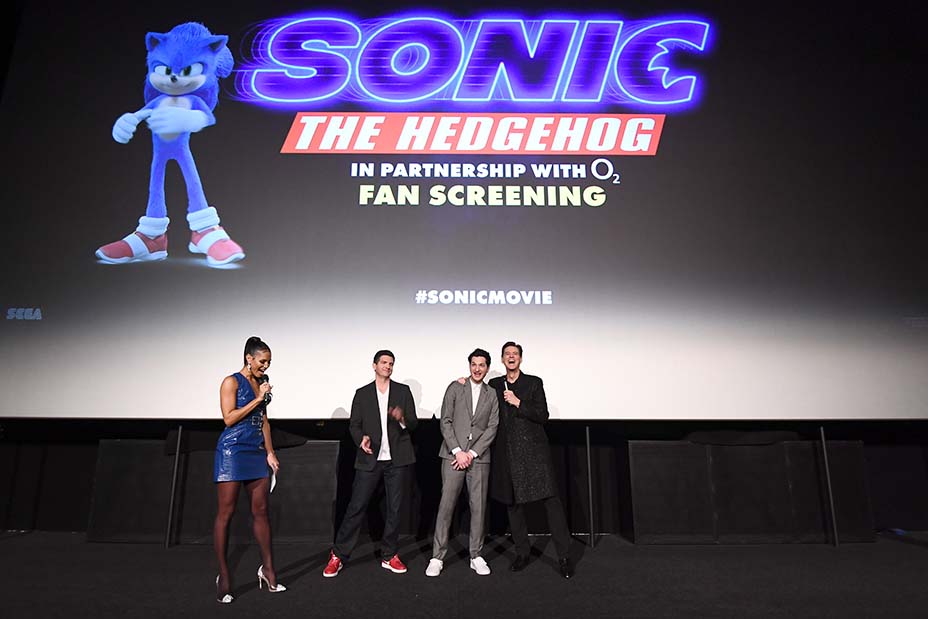 With a Rotten Tomatoes score of a generally positive 66 percent, it’s notable how Paramount was able to turn opinion around here. Some movies have their fortunes sunk when reports emerge they had to undergo extensive reworking, as press narratives become negative and the word “troubled” is thrown around repeatedly.

That was accomplished in large part by seeming to be open to listening to fan criticism and making changes based on what it heard. Many companies have employed similar strategies over the years, especially since the dawn of social media’s influence, but it’s still relatively uncommon for studios to do so, especially when that means delaying a film for several months.

The campaign could be a hit with the younger crowd who are still fans of the games and who just want to see a goofy animated blue hedgehog bounce around and make jokes for a while. It’s disappointing that there wasn’t a continuation of the self-effacing sense of humor that was on display after the first poster came out, and that everything prior to November has been seemingly erased. But being able to bounce back from some early body blows is no small feat.