Sony’s Universe of Marvel Characters, also known as the Spider-Verse, is expanding its web, both outside of the Marvel Cinematic Universe, and, as just announced Friday, within it. Thursday, the world learned that the screenwriters of the upcoming Morbius, Matt Sazama and Burk Sharpless, are penning a film centered on Madame Web. While the character is far less know than Venom, or even Morbius, she has played an integral part in Spider-Man’s mythos over the decades. The news of the film’s development came just ahead of the breaking story that Sony and Marvel Studios have come to an agreement that will see Marvel chief Kevin Feige produce a third entry of Tom Holland’s Spider-Man series, with the character also appearing in another unspecified MCU film.

Whether this reunion is only for the immediate future remains to be seen. But it’s clear Spider-Man’s return to the MCU won’t curtail Sony from exploring Spider-Man’s supporting heroes and villains in films of their own, which could potentially see Holland’s Spider-Man enter the mix given recent comments from Feige.

Madame Web may seem like a strange and obscure choice for a solo film, but the announcement doesn’t seem like a coincidence. She may be the missing piece that bridges Spider-Man’s role in the MCU with the larger Spider-Verse.

Cassandra Webb, better known as Madame Web, was created by Denny O’Neil and John Romita Jr. in 1980. She first appeared in The Amazing Spider-Man No. 210. A mysterious mutant gifted with precognition, clairvoyance, and astral projection her condition of myasthenia gravis left her blind, paralyzed and connected to a life support system. Despite this, or perhaps because of it, Madame Web proved to be a capable ally in Spider-Man’s fight against crime, first helping him stop an assassination attempt and later helping him track down the Hobgoblin after the hero saved her from the Juggernaut. Her appearances became more arcane in nature with The Gathering of Five storyline, which saw her become immortal. Her mentorship shifted from Spider-Man to several generations of Spider-Women, including Jessica Drew, Julia Carpenter, Mattie Franklin, and her granddaughter Charlotte Witter. During this time, Madame Web also became a prominent figure in the ’90s Spider-Man: The Animated Series where she exhibited the ability to cross into alternate dimensions, testing Spider-Men from across realities to prepare them for the task of preventing Spider-Carnage from destroying the multiverse. 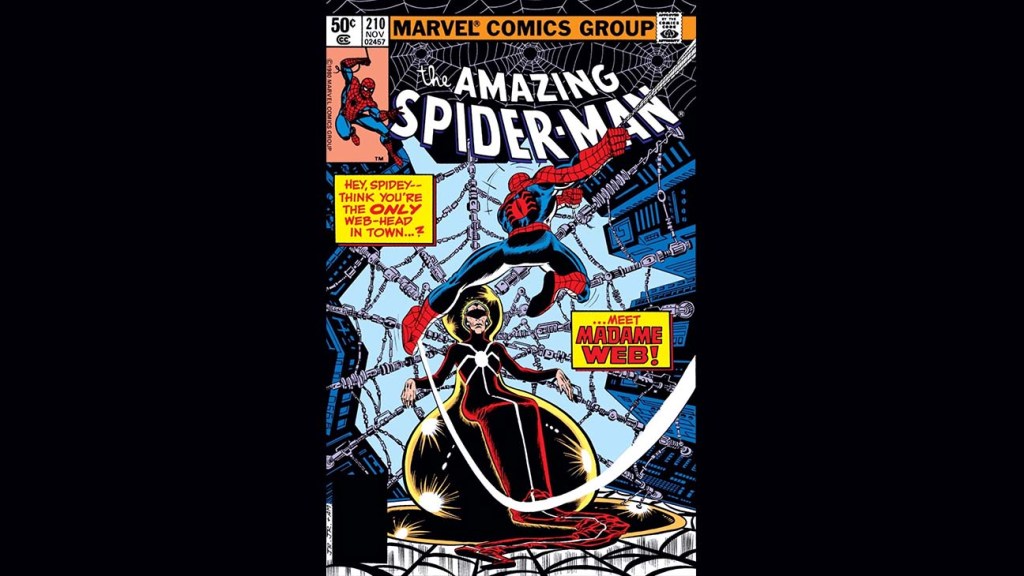 The multiversal awareness she exhibited in the animated series was later brought to comics through the The Web of Life and Destiny, a concept introduced by writer J. Michael Straczynski in The Amazing Spider-Man No. 30 (2001), and later expanded on in the video game Spider-Man: Shattered Dimensions. The Web of Life and Destiny was explained as the reason behind Madame Web’s precognitive abilities, and Spider-Man’s spider-sense, which was simply a lesser version of Cassandra’s own gift. This Web connected Spider-people from across the multiverse and was used as the road map for the Spider-related heroes (and villains) to travel the multiverse via a dimensional travel watch. When Madame Web was killed by Kraven’s daughter, Sasha, she transferred her powers to the second Spider-Woman, Julia Carpenter, sharing the gifts of The Web of Life and Destiny but also her physical blindness. Carpenter is still operating as Madame Web in current comics, navigating her new powers and disability.

In terms of a film, it’s not difficult to picture Madame Web focusing on both Cassandra Webb and Julia Carpenter, with the older figure mentoring Spider-Woman and then passing on her gifts and curses to the younger woman who now has to deal with the knowledge of an impending threat and connect heroes from across dimensions to fight it. Spider-Man: The Animated Series might serve as the best blueprint as to what to expect in terms of this. It’s practically guaranteed that Woody Harrelson’s Carnage will appear in more than Venom 2. Should he find himself able to travel the Spider-Verse via The Web of Life and Destiny, he would undoubtedly bring his murderous rampage across worlds. Now, this is where Tom Holland’s Spider-Man enters the fray.

With Friday’s news of Sony and Disney reaching an agreement, Feige said “[Spider-Man] also happens to be the only hero with the superpower to cross cinematic universes, so as Sony continues to develop their own Spidey-verse, you never know what surprises the future might hold.” That’s good enough for a subtle confirmation that Holland’s Spider-Man will be able to connect to Marvel Studios’ franchises as well as Sony’s Spider-Verse. While it’s possible the third Spider-Man film, set for release in July 2021, wraps Spider-Man’s MCU story, it’s also just as possible, given that unspecified MCU film appearance announced in the new deal, that Spider-Man will be able to travel back in forth between dimensions, teaming up with Brie Larson’s Captain Marvel in the next iteration of the Avengers and butt heads with Tom Hardy’s Venom on how to deal with Carnage.

Madame Web is most likely the key to bridging the two universes that Spider-Man now seems to be a part of, securing his future in the MCU and ensuring the Spider-Verse is never at a loss for alternate versions of characters and reality-hopping storytelling. In the modern age of comic book movies, it’s become all too easy for fans to scoff at C- and D-list characters receiving their own movies, especially when they come from outside of Marvel Studios. But there was a time when people didn’t have a clue what a Rocket Raccoon or a Groot were. And most are still in that position with The Eternals, the upcoming Angelina Jolie-led Marvel Studios film. Madame Web may not be a marquee comic book name, but she may be one of the most important characters to make her way from page to screen over the next few years, safeguarding the possibility for the MCU and Spider-Verse to both remain amazing.

How Marvel Can Solve Its Spider-Man Problem in One Movie