Captains Kirk and Picard finally meet, their two ships — the Enterprise — locked in battle on the film’s poster.

That was the original (and exciting) idea co-writer Brannon Braga pitched for what would become Star Trek: Generations, released 25 years ago Monday. Unfortunately, what could have been an inspired and action-packed first encounter between William Shatner and Patrick Stewart’s iconic Star Trek characters went another way, one that introduced the two captains for the first time over Kirk scrambling eggs and, in the process, almost stalled the very franchise it was intended to reinvigorate.

Generations was written by Star Trek: The Next Generation writers Braga and Ronald D. Moore — integral scribes to the TV show who would go on to write 1996’s First Contact.

But the seventh Star Trek film was an uphill battle from the jump. It started when Braga and Moore were called into producer Rick Berman’s office during the series’ sixth season to be asked to write the film. Unlike the TV series, where Berman and his writers were left largely to themselves to create episodes without much studio interference, Generations was born in part from studio mandates that would ultimately hamstring the movie’s full creative potential. (You can practically feel all the boxes being checked as the film lurches clunkily from scene to scene after the opening teaser featuring a 23rd century Kirk, Scotty and Chekov on one last mission together aboard the newly christened Enterprise-B.)

Two scripts were originally commissioned — one by former Next Generation showrunner Maurice Hurley, which would focus solely on the Next Gen crew, and the other, written by Moore and Braga, centered on Picard and his crew engaging with members of Kirk’s. Despite Berman’s insistence on the Blu-ray special features that Paramount did not make the filmmakers have the first Next Generation movie include members of the original crew, Moore recalls differently on the disc’s commentary track. “There was a requirement from the studio that the original series’ castmembers only appear in the first 10, or 15, minutes of the film,” Moore said. “But then Captain Kirk can return and come back at the end of the picture and have an adventure with Picard.” 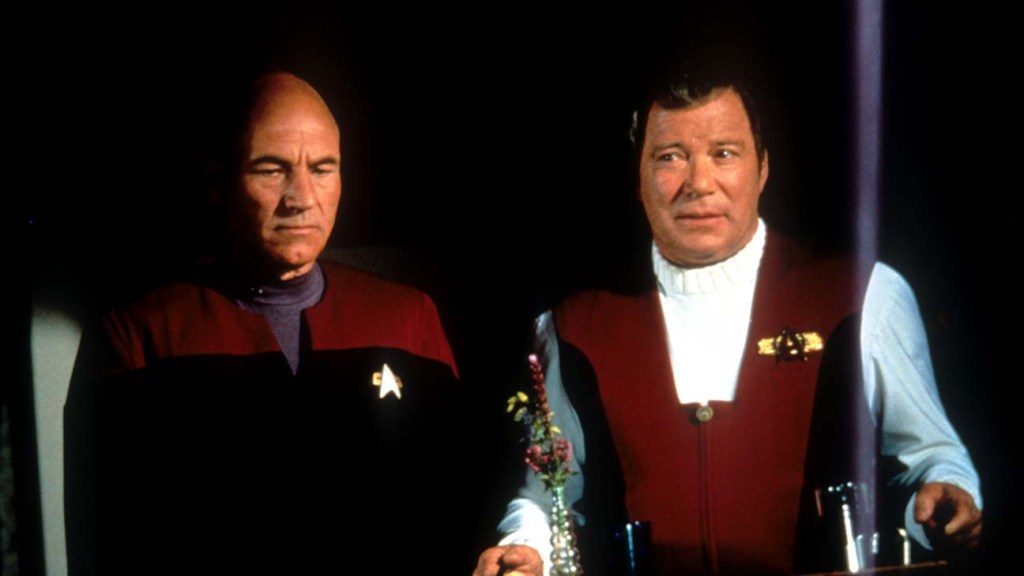 That adventure consisted of the two Starfleet legends uniting at a log cabin, over the aforementioned eggs, on a mission to stop the villainous Dr. Soran (Malcolm McDowell) from course-correcting an energy ribbon home to a living dreamscape known as the Nexus from destroying a planet. That is how the story shoehorns in Kirk’s appearance into this 24th century-set adventure; the good captain somehow was “zapped” into this Nexus when he first encountered it while saving the day one last time aboard the Enterprise-B. (Other story requirements included a central villain, a la Khan, the Klingons and a comedic runner that would become a subplot involving android Data reconciling with his first use of an emotion chip that allows him to feel.)

The end result is a noble misfire, an extended-length TV episode with a medium-sized film budget ($38 million) whose reach exceeds its ambitious grasp. Nothing great — or on the level of the great Star Trek pics like Wrath of Khan or Undiscovered Country — could come from a story that, of all the possible ideas the production could afford to execute a (brief) shared universe with these iconic characters, the best ones to win involved making breakfast and riding horses with guys who belong on starships. (In fact, writing that scrambling eggs scene is when Braga, in a June 2019 episode of the Inglorious Treksperts podcast, admitted that that is when he and Moore knew the movie had taken a turn.)

Despite Generations’ shortcomings, including the emotionally unsatisfying choice of having Kirk die being crushed by a bridge instead of on the bridge of his ship, the movie does boast still-impressive ILM model work — especially the signature set piece of crashing the Enterprise-D’s saucer section on an alien world. The Data subplot has maybe one too many groan-worthy dad jokes, but it is an effective and charming arc for the character. And watching the two captains take a beat to size up their first (and last) mission together — Kirk: “I take it the odds are against us and the situation is grim” — sparks the same fanboy glee we felt when seeing Iron Man team up with Cap and Thor and the rest of Marvel’s Avengers in 2012, some 18 years after Star Trek piloted the shared universe idea that Marvel would refine and make their own.

The movie opened at No. 1 at the box office, making just shy of $76 million domestic throughout its theatrical run. It was a base hit but felt like a disappointment, both creatively and financially, given the hype surrounding the team-up of the two captains. The film, and its lead stars, even appeared on the cover of Time magazine back when that was a big deal. The Next Gen crew, coming off one of the best TV series finales ever, “All Good Things…” (also written by Moore and Braga), deserved a better, bigger, feature film launch. The studio wanted the movie to service as a passing of the torch from Kirk to Picard, but the mixed-to-negative response to the pic from both critics and fans risked extinguishing that flame. The best thing to come out of the movie, however, was another sequel.

Star Trek: First Contact — “The One With the Borg” — all but erased the bad-ish taste Generations left in the mouth of audiences, eliminating any doubt the studio may have had about Stewart and his fellow castmembers being worthy successors to the franchise that Shatner and his crew pioneered.

While we never got to see the two captains locked in battle the way Braga envisioned, we did get to experience a landmark moment in pop culture — one that arguably helped pave the way for the current landscape of blockbuster IP and movie crossovers.

But we’ll never get over that damned egg scene.

'Star Trek': The Story of the 'Next Generation' Crew's Greatest Movie