Continue to The Hollywood Reporter SKIP AD
You will be redirected back to your article in seconds
Skip to main content
December 20, 2019 6:00am
Logo text

[This story contains spoilers for Star Wars: The Rise of Skywalker]

Star Wars: The Rise of Skywalker has promised to be a truly conclusive finale to the overall Skywalker Saga from Lucasfilm, as well as just serving as a closer to the sequel trilogy that J.J. Abrams started in 2015. Within the new films, though, there weren’t that many questions for Abrams and company to ask that couldn’t be boiled down into three words: “Who are you?” The recipient of that question, posed in The Force Awakens, The Last Jedi and now again in The Rise of Skywalker, is the same each time: Rey, a young woman with surprising Force powers. Now the answer has been definitively clarified without actually feeling that coherent.

As introduced in The Force Awakens, Rey (Daisy Ridley) is a young woman living in the nowhere planet of Jakku as a scavenger. We first meet her as she raids the remains of a destroyed Imperial ship in the hopes of trading her scraps for a daily portion of food. Rey has dreams of going off and being a hero of some kind, but not before the robot BB-8 and the ex-Stormtrooper Finn (John Boyega) stumble into her little life. By the end of the first film, it’s clear that Rey may seem ordinary, but she has extraordinary gifts: piloting the Millennium Falcon, harnessing the mysterious Force and more.

The Force Awakens only teased at some greater idea of who Rey might be, in part because she strongly believed that her parents — or someone — would be back to find her on Jakku. In the superior 2017 sequel The Last Jedi, though, her adversary, Kylo Ren (Adam Driver), twisted the knife on Rey, emphasizing that she already knew the truth about her parents. “They were nobody,” he told her, a harsh and shocking revelation that upended expectations. Though some fans were vocally displeased, other fans (as well as writers, such as yours truly at this very outlet two years ago) were thrilled at the implications of this surprise. Rey having unimportant parents wasn’t a bad thing. In fact, the notion that Rey’s powers were special simply because they were hers was a vastly more exciting idea than the presumption that she could only be gifted because she was a Skywalker or a Solo.

Or, as The Rise of Skywalker makes clear, a Palpatine. Emperor Palpatine (Ian McDiarmid) was thought to be long dead, but it turns out that he’s been clinging to life on the mysterious planet of Exogol, building up a Sith army that would be led by him … or his granddaughter, who is indeed Rey herself. Technically, of course, Abrams and his co-writer Chris Terrio are playing fair with this twist. Kylo did say Rey’s parents were nobodies, and from what we see in a very brief flashback, their only claim to fame was that her father was Palpatine’s son. And for anyone who needed to know why and how it was that some random scavenger from Jakku was so powerful, you now have your answer. Just as Emperor Palpatine is extremely Force powerful, so too is his granddaughter. (Of course, the movie never fully clarifies how Palpatine is still alive, nor does it clarify why his son wouldn’t have been as gifted with the Force as he is.)

But knowing that Rey is Palpatine’s granddaughter is the kind of reveal that’s initially shocking (whatever else is true, it’s hard to imagine pinpointing that as the twist upon Rey’s introduction in The Force Awakens), before turning out to be fairly hollow. Rey learning her true bloodline isn’t quite as thudding a twist as, say, the surprise that Benedict Cumberbatch’s baddie in Abrams’ Star Trek Into Darkness is actually Khan Noonien Singh. But just as the latter surprise lands poorly because the lead characters in the alternate-timeline action-adventure don’t know who Khan is, Rey’s awareness of Palpatine is minimal at best. The opening crawl of The Rise of Skywalker sets in motion the idea that the Emperor has broadcast a message of evil throughout the galaxy while remaining hidden, so she would at least know his recent handiwork. That, and some tossed-off ideas of who he is from legend, would be her level of awareness. 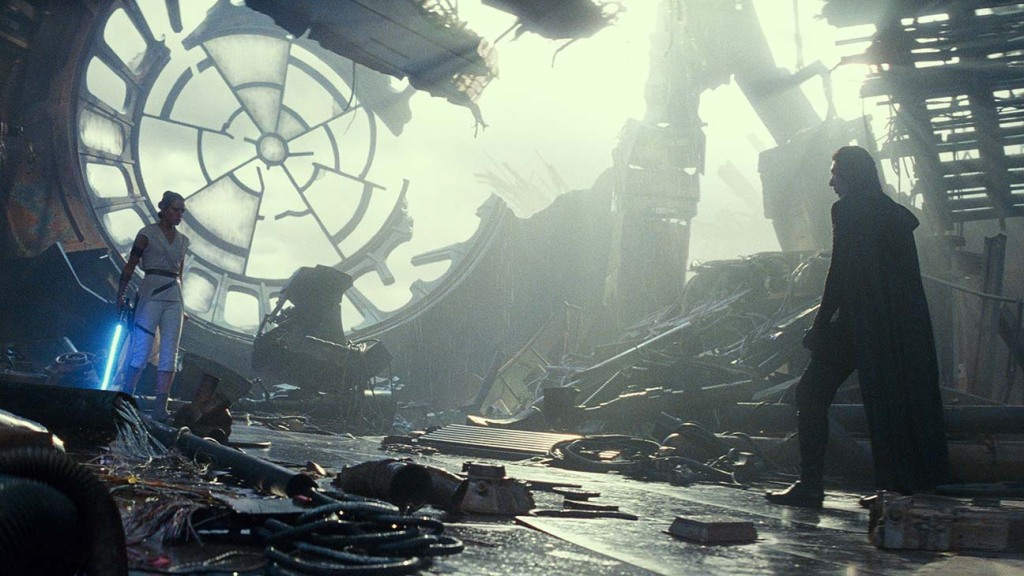 Think of the obvious parallel between this surprise and that of Luke Skywalker finding out his dad is Darth Vader in The Empire Strikes Back. Leave aside any argument about how fair this twist is played relative to the original Star Wars. When Luke hears this news, he’s visibly anguished and heartbroken; it’s a devastating reveal because Luke has a pretty firm idea of who Darth Vader is. This is a gutting reveal, not just because Luke wishes it’s not true, but because he knows in his heart that it is true. Rey finding out that Palpatine is her grandfather may be surprising to us, because we have two previous trilogies’ worth of films to imply that being related to this dude is pretty damn grim. But Rey doesn’t have that history. Whatever reaction you may muster to this surprise, it’s a twist that plays on your awareness, not the characters’.

Star Wars: The Rise of Skywalker is trying to be a lot of things to a lot of people. (From this writer’s vantage point, the people who strongly disliked The Last Jedi are the true winners here. So … good for you?) In that overall scheme, the film is trying to appease anyone who was skeptical that Rey really was just a random young woman. But her identity is malleable all the way to the end — in the final moments of the film, standing just outside of Luke Skywalker’s old home on Tattooine, Rey is asked not only her first name, but her last name too. (People in these movies are weirdly obsessed with knowing full names.) And, after a pregnant pause, she answers: “Rey. Rey Skywalker.” It has a nicer ring, perhaps, than “Rey Palpatine”, but that closing line only emphasizes how fruitless the question of who she is ever was. The best answer was revealed in The Last Jedi. Undoing that answer in The Rise of Skywalker only proves that sometimes, it’s best to leave well enough alone.