Growing up beside a dollar movie theater in Early, Texas, a young Aaron Morgan was informed by his parents that he could see any film he wanted. “They even made a special arrangement with the manager to let me walk in by myself to R-rated movies,” Morgan, now a film director, tells The Hollywood Reporter ahead of the world premiere of his short film Seek at South By Southwest (SXSW). As a result of his parents’ “excellent decision,” Morgan saw a slew of mature horror films like The Thing, The Beast Within, The Fly and Alien when he was 4 and 5 years old. “I remember when Robocop came out and I had five bucks, and I literally went [to see it] three times in a row.”

Horror is where he found substance and meaning. “I absolutely love horror, because I do think it gives you a chance to explore issues and subjects and couch them in the sugar pill of exciting genre and cool monsters,” Morgan explains. In his pursuit of such terror, Morgan has gone on collaborate with screenwriter Eric Vespe, whose first memory is waking up in his babysitter’s lap at 2 years old to find her watching Poltergeist on VHS. “It was the scene where the coffins were coming up out of the ground and Craig T. Nelson’s screaming,” Vespe tells THR. A huge James Wan fan, Vespe grew up reading his mother’s Stephen King novels and seeing “absurd stuff” like Ridley Scott’s 1985 sci-fi rom-com Legends. “It’s so precisely shot and evokes a [certain] tone,” he says, recalling its influence.

Seek features a mysterious creature — the Lonely Child — haunting a girl inside a barely habitable roadside bathroom as her sister waits in the car, unknowing. In settling upon this scenario, the pair looked at the political climate to fuel their inspiration. “I thought about the bullies, the people in power, the skeletons in their closet and how they got to that place,” says Morgan. “The Lonely Child represents the steps someone in power has stepped on as they’re climbing the ladder.”

He continues, “To me, the ultimate evil is seeing people as things, and so if someone like the Lonely Child is a thing and you threw them away or did something horrible to advance yourself, the Lonely Child is the thing that comes back and says, ‘Hey, remember me? Remember what you did? Maybe you’ve gotten away with this for too long now.'”

He and Vespe formulated the concept while on a road trip where they witnessed the genuine horror of public bathrooms and abandoned buildings. Morgan explains, “I’d let my imagination run wild; like, what could be in there? If there was an emergency and I had to go in there, how awful would it be?” He adds that this short film is part of a larger mythology to be investigated through future projects.

With the two self-identifying as cinematically minded people, Seek includes an homage to Night of the Creeps and Monster Squad, as well as an indirect throwback to Gremlins. “There was a scene that I had in my head when I was directing, and that’s the kitchen scene with the mom, where she goes upstairs and sees the cocoons opening, and she’s slowly, methodically going through the house and hearing all these noises,” Morgan recalls. “Finally, you get to see this weird, strange, small creature menacing her in the kitchen. I’ve always found small creatures amazing and beautiful and fascinating, but they’ve always creeped me out as well. Small things in the dark.”

Thinking of some of the most memorable movie monsters in recent history, Vespe summons the “multifaceted” creatures that have appeared in Guillermo del Toro films. “He always has sympathy for the creature,” says Vespe, emphasizing that with the Lonely Child there’s an element of menace as well as an “embodiment of past sins brought back.” Morgan jumps in with, “We wanted to evoke an immediate sense of sadness for him.”

To bring the Lonely Child to life, Morgan recruited special effects makeup artist Arjen Tuiten, who helped design the Pale Man in Pan’s Labyrinth, alongside VFX artists Rogelio Salinas and Todd Sheridan Perry. Morgan explains, “In five minutes it’s difficult to convey everything we wanted to say and do, so it was important to have something that’s visually and instantly iconic.”

Morgan and Vespe are represented by Scott Henderson at CAA.

Seek was set to have its world premiere in the Midnight Shorts Competition at SXSW on March 14, however the festival has been cancelled due to the coronavirus outbreak.

View the teaser above and the art print below. 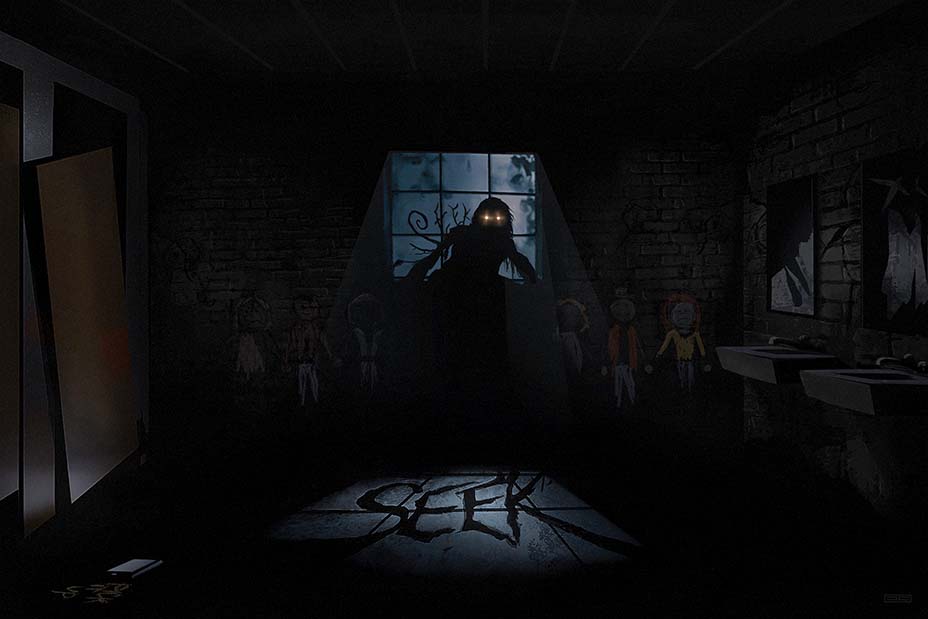 'Brahms: The Boy II' Director on the Jared Kushner Memes That Greenlit His Horror Movie

March 6, 4:35 p.m.: Updated to reflect that the SXSW screening has been cancelled.