Nine years later, the ending of Toy Story 3 is still one of the more emotionally devastating pieces of Pixar’s filmography. Even before a teenage version of Andy, who once played with toys like Sheriff Woody, Buzz Lightyear and Jessie the cowgirl, hands off those same toys to a little girl, the toys are placed in a literally death-defying situation. By the end of the film, the characters have cheated death and been able to tell the tale. The definitive-seeming ending of Toy Story 3 raised an obvious question when Toy Story 4 was announced: how could this movie improve upon what felt like the equivalent of a massive book being closed for good?

The answer is made clear early in Toy Story 4. Instead of being quite the same kind of ensemble piece, the film focuses on letting go and moving on in the form of Sheriff Woody himself. Marvelously voiced once again by Tom Hanks, Woody struggles to accept his place in a new world where Bonnie, the little girl who was given Woody at the end of Toy Story 3, is interested in other toys. (As gutting as it may be for us to watch Bonnie ignore Woody, she’s a little kid in the 21st century, and he’s a pull-string doll from the 1950s. Can you blame her?) Her world of play is plenty imaginative, but there’s apparently no room for Woody anymore. As a reaction to this, Woody throws himself into helping out Bonnie’s new toy, the spork Forky (Tony Hale), but it’s evident that he’s only doing so to distract himself from accepting that his presence is no longer truly necessary in her bedroom.

Once Woody encounters his long-lost love Bo Peep (Annie Potts) during a road trip, he’s given an obvious option that seems existentially terrifying: be a toy without an owner. There’s a debate throughout on whether or not Bo Peep is a “lost toy” (a phrase that Woody once shouted in anguish to the heavens in the 1995 original), when the truth is clearer. Even if he’s not physically lost, Woody is adrift emotionally. So after the big adventure at the core of the film concludes, and Forky is brought back to Bonnie’s arms so she can love the strange little faux-toy, Woody has one of two options: stay with Bo or go back with the others.

“She’ll be OK,” Buzz Lightyear tells Woody, who initially says goodbye to his old girlfriend to head back with the larger group. “Bonnie will be OK,” Buzz then emphasizes, making it clear that the longtime friends both understand where Woody is wanted most, and where Woody wants to be most. And so, in place of the extremes of the heartbreaking finale of Toy Story 3, this fourth entry gives us a more tender and bittersweet farewell. The ending seems, at first blush, to go against the guiding principles of the series, but it’s emotionally apt for its protagonist.

Especially in Toy Story 3, the concept of togetherness was hammered home as being most important. The word “together” is uttered often, Woody and the other toys face down the fiery landfill by holding each other, and the closing song is called “We Belong Together.” It’s not subtle. But it’s equally clear in Toy Story 4 that Woody’s own needs can become more important than that of the group’s without the group itself being ruined by his absence. In many ways, Woody finds himself at the outset of the film in a place similar to that of the squeak-toy penguin Wheezy, whom he tried to help rescue in Toy Story 2, and who was stuck on a high shelf where no kid could possibly find him. Wheezy was saved simply to collect dust, and Woody doesn’t want to find himself suffering the same fate. 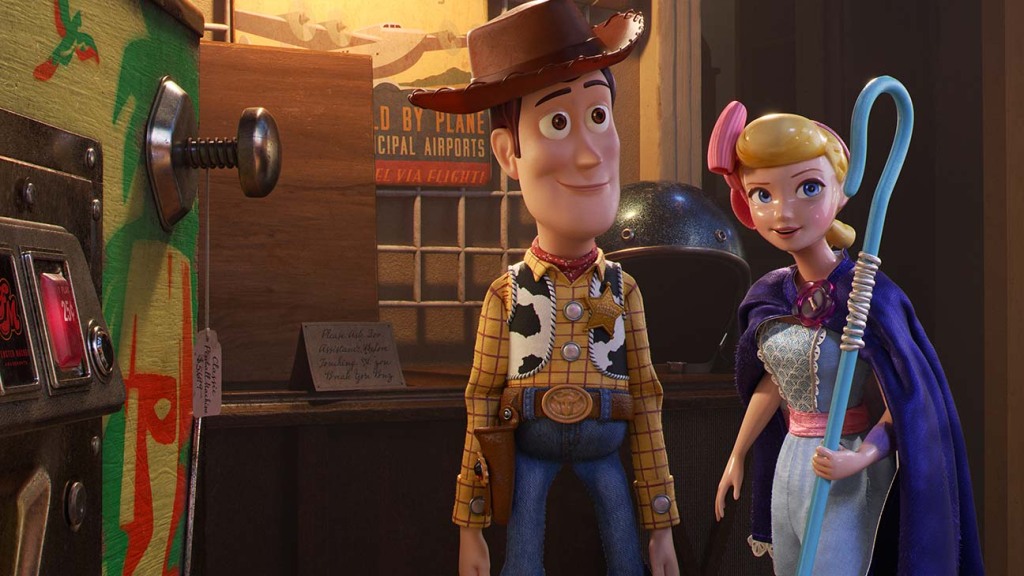 Toy Story 4 manages to sidestep its predecessor’s finale without denigrating it. Woody sees his friends, appreciating that they too serve a role with Bonnie in her room, and they’re happy to do so. Woody, though, is stuck in the past until he meets Bo Peep again and his love for her is rekindled. He realizes that his place may once have been with a kid, but that kid was Andy, and he’s in college now. (Though we briefly see a younger Andy during the prologue, there’s no return for the older Andy. His story really is done.)

So when Buzz essentially acknowledges the obvious, it frees Woody to be happy once more. The fond farewell he gives to all of the other toys, culminating in an embrace with Buzz, is this film’s emotional gut punch, without being quite as devastating as prior scenes in Pixar history. Honestly, while it’s impressive that the studio keeps coming up with ways to make audiences collapse into tears, it’s equally pleasing that they didn’t push themselves as far as Toy Story 3‘s filmmakers did.

Toy Story 4 had to fight the early presumption among skeptics (including this writer) that it existed solely to make money for Disney. The prior three entries in the franchise had been hilarious, entertaining, suspenseful, intelligent adventures, with each one seeming like an impossible magic trick. But going back to the well once more — no doubt this film’s success may make Disney want to greenlight a fifth story, but that would be tempting fate one too many times — ended up paying off. As a more low-key coda and send-off for Sheriff Woody, Toy Story 4 excels.