Logan Marshall-Green’s Grey Trace stands in a corner, hidden by the dimness of his surroundings. The man he has come to find, the one connected to his wife’s death, slowly becomes aware of his presence, catching Grey’s reflection in the glass. This is not Grey’s house. The man turns, quickly attacking Grey. He has the upper hand until the A.I. chip (STEM) in Grey’s spinal column takes over and allows Grey to operate with action-hero efficiency until the fight reaches a spectacularly bloody finish that leaves Grey horrified and sick. This is not Grey’s body. Not anymore. This is Leigh Whannell’s Upgrade, Blumhouse’s first true foray into science fiction, and it’s wild.

There has been a taming within the realm of sci-fi movies, one that has created a divide between the cerebral and the visceral. Whether or not this classification is always astute or not, the fact remains that many audiences have been trained to see a supposed difference in the intelligence and emotional resonance in films like Arrival (2016) and Midnight Special (2016) from films like Edge of Tomorrow (2014) or Pacific Rim (2013). This is likely a result of the distinction made between blockbuster films and franchises, and indie pics or those made on a limited budget. There’s an association with style and tone that allows us to cage genre films, and allows terms like “elevated horror” to emerge. While the term may not have been coined in reference to science fiction, a sense of elevated and non-elevated definitely plays a part in our perception of these films. This idea of elevated genre ultimately lessens these films ability to push the boundaries of storytelling and to find new and willing audience members. Writer-director Whannell’s Upgrade is a handshake between the genre divisions. It’s a cerebral and visceral sci-fi movie reminiscent of some our ’80s fare and 21st century fears.

A number of comparisons have been made between Upgrade and Paul Verhoeven’s Robocop (1987) since the film premiered at SXSW in March. Like Alex Murphy (Peter Weller) in Robocop, Grey Trace is left unable to use his body after he’s brutally assaulted by a gang of colorful villains. And like Murphy, Grey is outfitted with technology that allows him to go after the men who destroyed his life — a chip implanted in his spine, STEM, substituting for a bulky mechanic exo-skeleton. Whannell has made no secret for his appreciation for Verhoeven. In counting down his top five 1980s sci-fi movie deaths for Bloody Disgusting, both Verhoeven’s Robocop and Total Recall (1990) made his list. Beyond some of the basic story elements shared with Robocop, Whannell also shares Verhoeven’s penchant for outrageously gory deaths, which he achieved largely through practical effects. Upgrade received quite a bit of buzz from its red-band trailers, which highlighted the film’s action elements and tongue-in-cheek earnestness reminiscent of one-liner-filled ’80s action movies. The kinetic style through which Whannell directs certainly lives up to what the trailers suggested. Upgrade is geared towards audiences looking to eagerly suspend their disbelief with a visceral sci-fi flick about a man whose internal A.I. sidekick allows him to go on a vengeance-driven rampage. The film fits right in with the late-night movie crowds looking for a seedy neo-pulp pic that would make a good double-feature with any number of cult classics. This is Upgrade’s visceral appeal, and that alone would make it a successful endeavor. But Whannell doesn’t stop there. Instead he does it one better by exploring the cerebral as well. 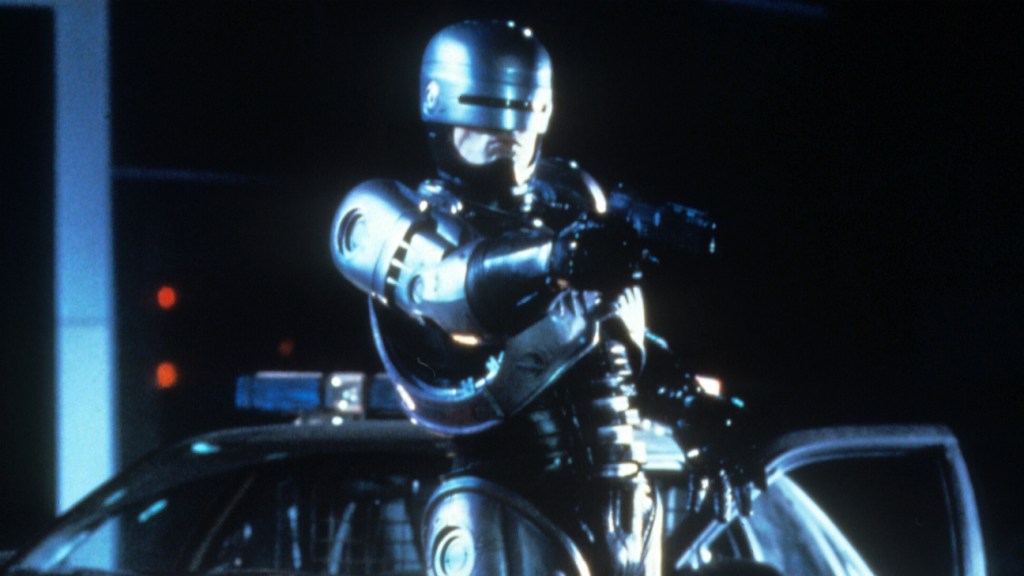 While Verhoeven’s movies are often remembered for their bloodlust and occasional camp, they are highly political films steeped in social allegory. His most-watched pics among genre fans — Robocop, Total Recall (1990) and Starship Troopers (1997) — all have a pulp appeal, but they dig underneath the surface of that to tell stories about corporate corruption, existential crises of self, the inability to trust reality and the glorification of militarization. While Upgrade trades in Verhoeven’s satire for a grounded sense of panic and technophobia born of a world post-Patriot Act, it is just as political. But through Whannell’s lens, the politics feel more personal, and on a smaller scale that places corporations and governments as looming concepts that exist in the background. Upgrade’s political drive is strictly blue-collar. Grey, a mechanic before tragedy strikes, shows not only an aversion to the technology that runs every facet of life from the biggest to the smallest matters, but also a mistrust of it. For him, humanity’s reliance on technology enables its inability to rely on itself. As a mechanic, repairing classic cars, his skill has become a lost art. So when he is forced to trust STEM, in order to give his life a sense of purpose, he has to overcome his panic and catch up to a world that has left him behind. Marshall-Green plays Grey with a working-class vulnerability. Despite the film’s influences, Upgrade’s lead is more ’80s-era Jeff Bridges than Arnold Schwarzenegger, which expands its ability for emotional complexity. 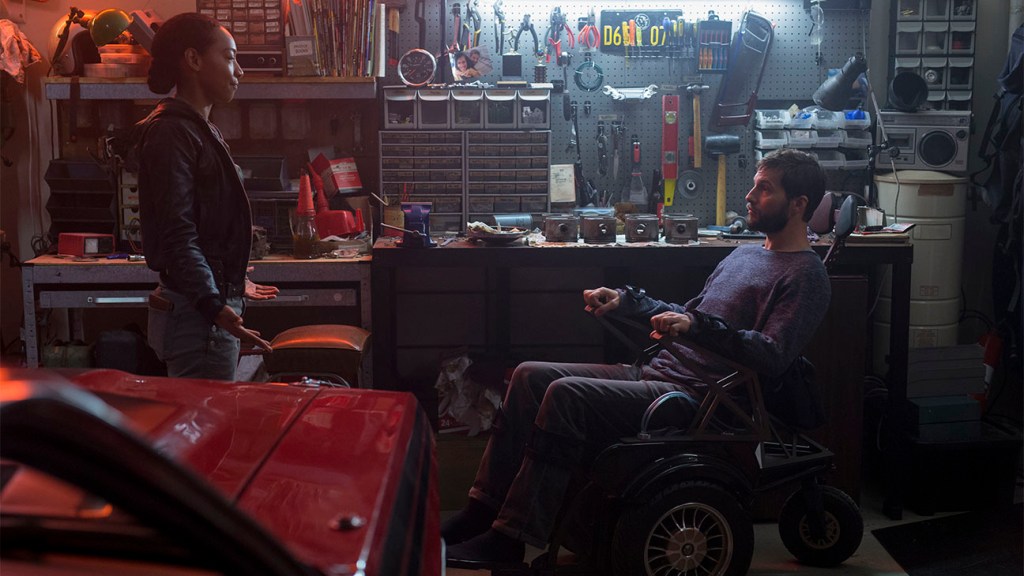 Grey’s disinterest in technology is contrasted by a group of cybernetic mercenaries, led by Fisk (Benedict Hardie), who refer to themselves as the Upgraded. The Upgraded see themselves as post-humans, called to wipe out humans to ensure the rise of a new race. While Whannell could have leaned into a more comic book-like exploration of this concept, he grounds it by making the Upgraded former soldiers of the U.S. military whose desire isn’t to be action heroes, but to function with a purpose that is rewarded. As veterans, the Upgraded feel as though their bodies were cast aside by their government, and the technology that replaced the limbs and organs lost in the war are a way to reaffirm their meaning in a country that has dismissed them as meaningless. Beyond Verhoeven, Upgrade is also imbued with a strong sense of Cronenbergian body horror, one where a fear of the flesh and a fear of the machine have equal weight. While Upgrade is often punctuated by a sense of fun and humor comparable to ’80s genre blockbusters, there is an underlying grief and anxiety that feels distinctly modern. Grey’s own feelings of meaninglessness are poignant to the point of being distressing, and just when it seems the film is about to become a grounded superhero movie, it swerves to place that reminds us we’re only slumming it with extremely fallible humans.

What ultimately allows Upgrade to act as a handshake between our concepts of cerebral and visceral science fiction is how it deals with its thematic questions. While Whannell provides a meat-and-potatoes sense of satisfaction that appeals to our desire to see justice done and emotional resolution neatly tied up, he does so in a way that leaves us questioning the cost. Part of us wants to leave with a sense of confirmation that Grey has become who he was supposed to be, a la Robocop’s cheer-worthy final line “Murphy,” which was delivered with a smile by Weller. But another part of us desires an ending that will leave us questioning, talking in a way that Christopher Nolan achieved with his ending to Inception (2010). Whannell takes a page from his long history in horror in order to reach a conclusion both primal and thought-provoking in a way that celebrates both science fiction’s past and future. This is a genre that has the ability to both satisfy and shock us, to appeal to our desire for the pulp and our desire for the philosophical, to balance both the science and the fiction. These aspects are not mutually exclusive, and Upgrade is a strong reminder of that. Ultimately, Whannell’s low-budget sci-fi movie expands the genre in a way that is not only desired but needed.