Widows opens with a scene of intimacy between married couple Veronica (Viola Davis) and Harry Rawlings (Liam Neeson). While Davis and director Steve McQueen have already spoken of how unique it is for a mainstream film to display an interracial couple over the age of 40 in such a way, the fundamental notion of a heist thriller opening with such a quiet, intimate moment is also in itself a noteworthy deviation from the norm. Widows does not entirely ignore the conventions of the genre — the quiet moment shared by the Rawlings is soon intercut with a high-energy police chase involving Harry and his men after a robbery gone wrong. McQueen just approaches the genre on his own terms, and his terms are these: Humanity comes first. You get the car chase and shootout, but not without meeting the men involved and having to acknowledge them as not interchangeable plot devices in ski masks, but flawed human beings with faces and families and lives.

Throughout, the film engages with, and more often than not ultimately subverts, other such genre tropes towards similar ends. Gang enforcer Jatemme Manning (Daniel Kaluuya), for example, makes for a terrifying foe, but he is no grinning sadist — he just looks like one at surface level. In the 2017 horror pic Get Out, Kaluuya proved himself an actor capable of expressing multitudes with his eyes alone, but as Jatemme, his eyes are dead. Sure, when he has an audience he puts on a show, but while his violent acts may appear sadistic at first glance, no indication is given that he actually derives pleasure from his crimes. He pulls the trigger of a gun and stabs a knife into flesh without ever showing a moment’s hesitation, but just as this demonstrates a total lack of empathy, it also indicates an absence of anticipation. 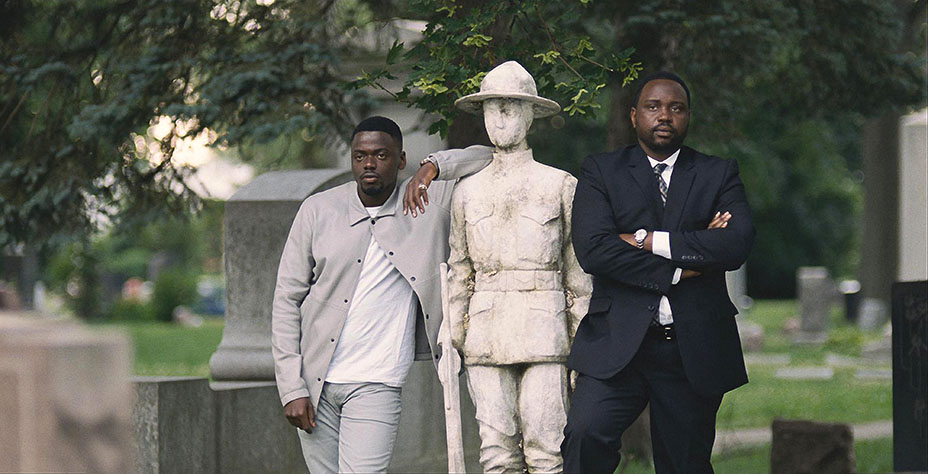 Similarly, Jatemme never lingers over his handiwork a moment longer than need be, and when his henchmen beat a man to death, he shows no desire to watch or join, instead turning his focus to a nearby television. While Widows features even more treacherous characters than it first appears at the outset — Gillian Flynn did co-write the screenplay, after all — it is Jatemme that the film posits as the ultimate source of fear, the threat that Veronica uses to convince Linda (Michelle Rodriguez) and Alice (Elizabeth Debicki), who also lose their husbands in that botched robbery, to join forces. Jatemme is intended to frighten us, and the source of this terror is best described as neither sadism nor psychopathy, but complete and utter desensitization. Looking at McQueen’s filmography, such a message is incredibly on brand.

McQueen is not a storyteller who deals in pandering or sensationalism but genuine empathy. As I wrote about earlier this year in the context of Red Sparrow, pics that seem well-intentioned often end up being themselves exploitative while seeking to condemn various exploitations. Here’s how it happens: Filmmaking is an art, but also fundamentally a business, and the typical viewer is looking first and foremost to be entertained when going to the movies. A film wants to take on a painful subject, but actually identifying with pain and suffering is not generally speaking all that entertaining. So, what to do? Well, as anyone who has ever been caught in a traffic jam caused by people slowing down to gawk at a car crash knows, human beings have a morbid fascination with carnage, so long as we are emotionally detached from it. And that’s what many films do — they emotionally detach from the violence. A few standard techniques used to do this include stylizing the violence to focus on gore (blood spatter, etc.) while avoiding the face of the victim, and fragmenting the act through shaky, extreme close-ups and rapid-fire cutting to generate a visceral reaction while discouraging mental or emotional engagement. It is through this desire to depict violence while remaining entertaining that many movies, often without any conscious intent, can end up being concerningly exploitative.

All of McQueen’s earlier feature films deal with narratives — hunger striking (Hunger), sex addiction (Shame), slavery (12 Years a Slave) — that could have easily fallen into such a trap, but they never do, instead repeatedly demonstrating his remarkable ability to depict both brutality and humanity without compromising either. The premise of Widows is not as inherently heavy, so to speak, but it ultimately chooses to be. It addresses issues of racism and sexism on both the interpersonal and institutional levels, intersectionality, police brutality and domestic abuse, among others. And once again, McQueen has demonstrated an unparalleled capacity for communicating both empathy and unflinching brutality.

So, how does he do it? Ultimately, across all his films, it boils down to two fundamental elements: The first is that he loves the human face. While close-ups are, of course, a staple filmmaking component in general, McQueen’s reverence for faces is reminiscent of Carl Theodor Dreyer in that he’s never going for the “beauty shot,” but emotional connection. When introducing characters in Widows, he almost always goes in for a close-up right off the bat, and his close-ups tend to linger. Eyes are the windows to the soul, and McQueen loves his tight close-ups. The second is in how he tends to depict violence in uninterrupted long takes, often at eye level or thereabouts, and at a distance mimicking that of a close bystander. In other words, the filmmaker tends to depict violence in a way that is as close as it can be to what it would be like to see it in person.

Some reviews have argued that Widows marks a departure for McQueen, but in its masterful balance of humanity and brutality, the pic remains consistent with the director’s earlier work where it counts. In successfully adding a mainstream-friendly dose of entertainment to the mix, McQueen’s approach has not shifted, but grown — and that’s an exciting thing to see.

Making of 'Widows': How Steve McQueen Went Mainstream for a $40M Heist Movie