The box-office performance of 2006’s Ice Age: The Meltdown got Chris Meledandri thinking. Domestically, the animated sequel about prehistoric mammals did only a little more business than the 2002 original ($195.3 million versus $176.4 million), but in the international market, it soared, more than doubling the take of the first film ($465.6 million versus $206.9 million). Meledandri, then president of 20th Century Fox Animation, credited the studio’s widely acknowledged strength in global marketing and distribution for some of that increase but was convinced there had to be a further explanation.

“I was trying to figure out why it overperformed internationally,” he recalls. “Carlos Saldanha, our director on that film, was Brazilian. He was fluent in English, but Portuguese was his first language. And as I reflected on the creative process involved and the never-ending series of challenges, I realized the tendency is to use words first as the means of solving a creative problem, but Carlos would always resort to images, and that was clearly the language that he was most confident with. So I began to think about the fact that animation is primarily a visual medium, and while story and dialogue are essential to the success of a film, the visual component is equally vital. And I also began to realize the value of having senior leadership on a film that is made up of people from different cultures, not simply to have those cultures represented but to keep pushing the visual storytelling into the mix so as you work your way through the journey of a film, the process is balanced between words and images.”

Meledandri, 57, who has two sons, made that thought one of his guiding principles when, a year later, Universal Pictures lured him away from Fox to start his own animation studio, Illumination Entertainment ­­— and it has proved to be the foundation of a winning formula. “He was so incredibly thorough,” says David Linde, who at the time was co-chairman of Universal, of the conversations that went on for a year before Meledandri made the move. “We trusted that Chris was going to create a true competitor, but I don’t think anybody expected he would do so so quickly.”

Just nine years later, Illumination —  the brand is co-owned by Meledandri and Universal, which fully finances and owns the films — has released six movies that have grossed nearly $4.1 billion worldwide; it has created a franchise in Despicable Me, which in turn spawned the company’s mascots, the jabbering yellow, pill-shaped Minions; and it opens its latest film, Sing, packed with 65 nonstop pop songs (accounting for 15 percent of the film’s $75 million budget), on Dec. 21. For this run of success, he is THR‘s Animation Producer of the Year.

Meledandri’s own stock has risen so high that Comcast’s $3.8 billion acquisition of DreamWorks Animation immediately triggered speculation that Universal would ask Meledandri to oversee DWA in addition to Illumination. Quick update: Right now, Meledandri says, “my role is to help Universal and DreamWorks chart the way forward in every way that I can”; but his main focus, he insists, remains on Illumination: “I’m trying not to fall into any of the pitfalls out there that could disrupt what has been a very organic evolution for this company.”

True to his global perspective, when Illumination opened its doors, Meledandri’s spent his first week in Tokyo meeting with directors and studios. And when he began setting up an animation facility — deciding that the competition for digital artists in the States simply was too great — he turned to the U.K. and France, where there was a ready pool of CG animators, eventually striking a partnership with the existing Paris-based animation and visual effects house Mac Guff Ligne to make Despicable Me. (Universal bought Mac Guff’s animation studio in 2011, rechristening it Illumination Mac Guff.) “France,” says Meledandri, “has a wonderful tradition of animation with some excellent animation schools.” 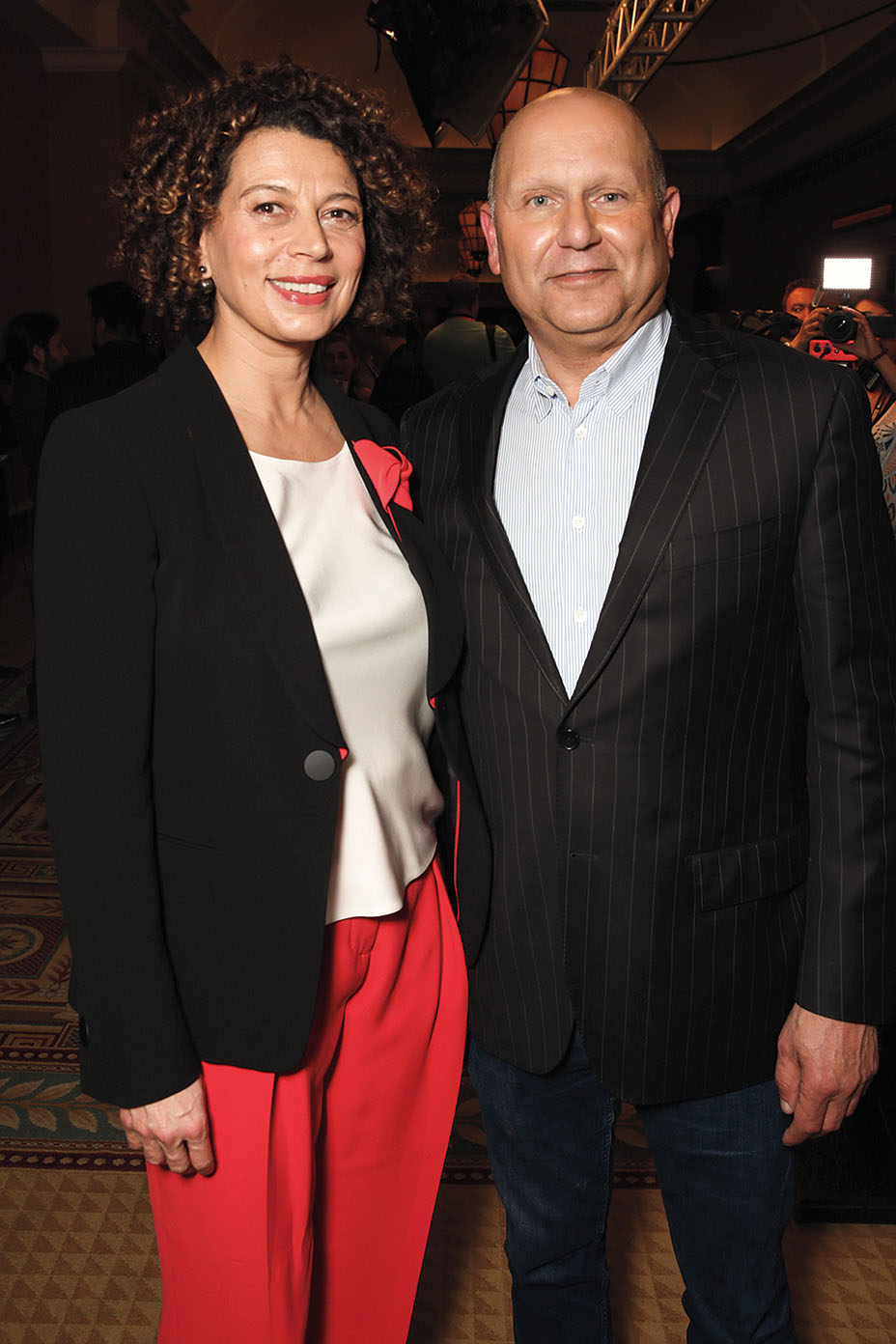 It was that talent, not the prospect of lower salaries, that led Illumination to France, says Meledandri, noting that the fringe benefits employers pay in France are much higher than those in the U.S., currency issues come into play, and travel budgets also can affect costs. Nonetheless, to the envy of its competitors, Illumination’s movies have cost about half of what is lavished on Pixar and DWA projects. The summer hit The Secret Life of Pets ($874.3 million worldwide) and the upcoming Sing each came in on budgets of about $75 million.

“Look,” says Meledandri, “the cost of an animated film really comes down to man hours. If you gather together world-class talent, then the question becomes how do you deploy that talent in a way that minimizes waste.” To that end, he keeps very close tabs on the whole process. While Illumination occasionally has set aside projects like proposed movies about Woody Woodpecker and Curious George, most of what it develops actually makes it to the screen. And while a studio like Pixar sometimes makes major course corrections mid-movie, Meledandri says he avoids that because “part of the advantage of having my constant involvement is I’m never surprised by what I’m seeing. I know exactly how we got there, and if it’s the wrong place, I take equal responsibility for having gotten us to that wrong place.”

So far, though, his instincts haven’t led to any dead ends as he’s mostly focused on original material, spun out of simple notions of his own like, “What do our pets do when we’re not around?” And he also has bet on new talents who’ve never directed full-length animated features, such as Despicable Me‘s Pierre Coffin and Chris Renaud, as well as Sing‘s Garth Jennings, whom he pursued after seeing his 2007 live-action indie Son of Rambo. Says Jennings: “Chris Meledandri came to me with an idea — he’d had it for years, and my job was to flesh it out with him, to find the characters and their conflicts and passions. That process was collaborative from that moment on. We talked every day.” 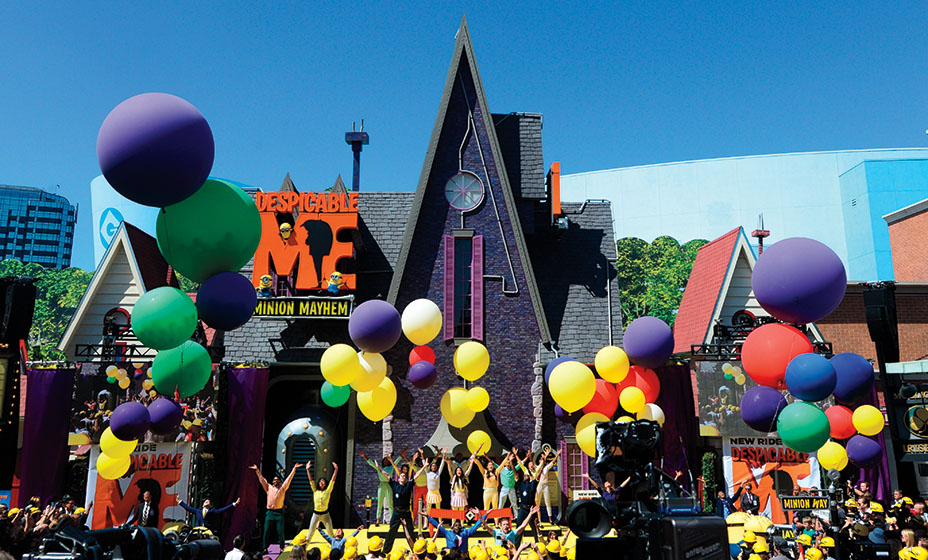 So is Meledandri ready to become Universal’s answer to Pixar/Disney’s John Lasseter — as has been suggested by Universal Filmed Entertainment Group chairman Jeff Shell? Meledandri demurs: “I take that as an extraordinary compliment, but I also think John Lasseter is a singular talent, and I would never try to walk in his shoes. He’s a director, and I’m not. Our goal is to find a way that Illumination and DreamWorks can flourish on a path that is unique to who we are. I’ve never tried to replicate anybody else’s process. The answer for our path going forward will be finding a unique process that suits our own strengths.” 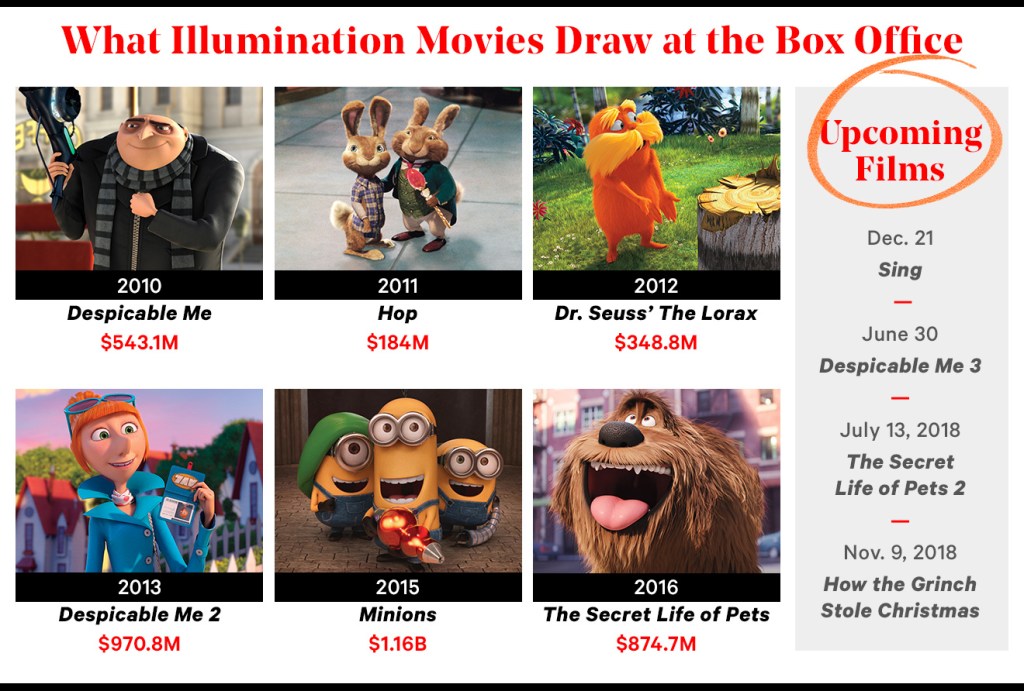