These days, Bob Beitcher, the CEO of the Motion Picture & Television Fund’s Country House and Hospital, quarantines himself in an apartment over his home’s garage. It’s part of a safety protocol meant to protect his family as well as the residents at the Woodland Hills campus of the industry’s embattled retirement community and nursing home, which is in the midst of its own front in the battle against the novel coronavirus.

The MPTF’s first resident tested positive for the virus on March 31. Its first death came six days later. “It feels like a war zone,” says Beitcher, who enacted distancing and screening measures on March 6, substantially before government orders to fight coronavirus at the local, state and federal levels went into effect. “Until our first positive I went to sleep every night thinking, ‘OK, is tomorrow the day?’ We knew it would happen. I’d get up every morning and pray. Then we heard the news. It was a gut punch. It’s like hearing about the first guy in your Army unit who gets killed. This is real; it’s not an exercise.”

So far, 18 residents have tested positive and four have died due to complications from COVID-19, the disease caused by the novel coronavirus, including 77-year-old Oscar-nominated cinematographer Allen Daviau (E.T.: the Extra-Terrestrial, The Color Purple), 80-year-old character actor Allen Garfield (The Conversation, Nashville) and Ann Sullivan, 91, a long-tenured animator at Disney. Residents under treatment mostly reside in a dedicated 18-bed wing on the property and a few with acute needs at nearby West Hills Hospital. In addition, nine staff members have tested positive.

The 227-resident MPTF campus was founded in 1921, three years after the emergence of the Spanish flu, by a group of early film industry titans — including actress Mary Pickford, who herself recovered from the disease — and financed with studio payroll deductions. One of the MPTF’s oldest current residents, 109-year-old Ruthie Tompson, a longtime veteran of Disney’s animation department, tells of moving to California during the previous pandemic: For the first six months she didn’t know what her playmates looked like since everyone wore masks.

To be admitted on campus — which features a spectrum of care levels from fully independent to assisted living to hospital-level — residents must be 70 years or older and have worked in the entertainment industry for more than two decades, with a percentage of that time spent in California. Both the industry member and their spouse or life partner are eligible. About half of residents are subsidized by the MPTF, which is sustained by industry heavyweights; its board of governors is a mix of studio heads (NBCUniversal vice chair Ron Meyer), director-producers (Christopher Nolan) and Hollywood legacies (actor Tony Goldwyn). Board chair Jeffrey Katzenberg, who just launched streaming service Quibi, has for years hosted the leading Oscar weekend preparty, called The Night Before, which this year alone raised $5.4 million for the MPTF. (The Hollywood Reporter is a sponsor of the Night Before event.) 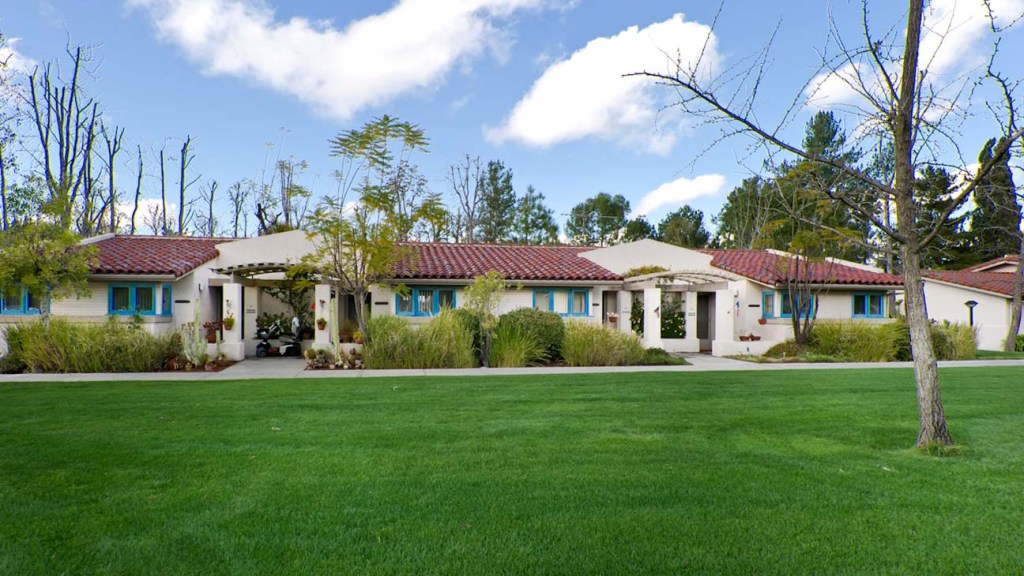 The MPTF’s outbreak arose in its long-term and memory care wards, where the activities of daily life require staffers to make frequent and direct contact with residents. “The reality is that we can quarantine our residents and we can’t quarantine our staff: They go to other jobs and they go home,” says Beitcher, explaining that care personnel make their living through shift work at multiple facilities. “Sooner or later, the law of probability takes effect.”

Producer Hawk Koch, a longtime board member, calls this “the biggest challenge the Motion Picture Home has ever seen.” Adds board vice chair Mark Fleischer: “The fear comes out of this perfect-storm combination of the deadliness and the potential of taking it home to loved ones and the lack of knowledge of how to deal with it.”

Beitcher says that residents of the rest of the campus were tested for the virus during the week of April 3, and the results were negative. Beginning this week, the home plans to institute point-of-care testing, which can accommodate up to 50 patients per day, with results in about an hour. Meanwhile, Beitcher is focused on setting up two additional distinct isolation units: One for residents who test positive but are asymptomatic, and another for those who have recovered and are now testing negative, but may still be capable of shedding the virus for several more weeks.

According to Beitcher, the MTPF is able to navigate the financial burden of the crisis. However, a key challenge is simply fielding enough personnel to respond to it. “I have some people who have already tested positive and can’t work and others who might be perfectly happy to do this kind of work under normal circumstances but when you say ‘COVID-19’ they won’t because of the risk to themselves and their families,” he explains. The work requires self-sacrifice like his own, including strict quarantining from family members. Right now, 10 staff members are sheltering on campus. “You get choked up when you hear about these care workers and know that they may get exposed and yet they go to those jobs day after day after day,” says Paramount CEO Jim Gianopulos, who chairs the MPTF board. “It’s humbling, their sacrifice.”

While death is an inevitable reality at geriatric care centers like the MPTF, the novel coronavirus inspires its own grave anxiety. “You may be undergoing dialysis or chemotherapy, yet there’s something about this,” says 93-year-old resident Jerry Kaufmann, who enjoyed a decades-long career as a writer and director. “Right now, the experts don’t know how to fight it. If they knew how to confront it, you wouldn’t be so terrified.”

On April 17, The New York Times reported that it had conducted a nationwide tally of COVID-19 cases connected to nursing homes and had so far found at least 7,000 fatalities — about a sixth of the disclosed deaths from the virus in the U.S. In addition, by its count more than 36,500 residents and employees across the country had contracted the disease. An index at the California Department of Public Health currently shows that at least 3,000 cases of the novel coronavirus have been reported at state elderly care facilities among residents and staff members, including the MPTF, since the epidemic began. The agency has not yet publicized death counts.

“I know what it’s like to have family in a place that’s at-risk — my mother is in memory care [at another facility],” says prominent entertainment attorney Nina Shaw, a member of the MPTF board. “This is a challenging time for all of these institutions.”

MPTF residents are practiced in quarantining for short periods — a few days or even a week — to stem periodic campus outbreaks of influenza or gastroenteritis. They find diversion in Turner Classic Movies and FaceTime with their loved ones. But the length of this lockdown, now stretching into its seventh week, as well as its increasing physical restrictions by the staff members who would otherwise directly tend to them, has meant they’ve also had to contend with challenges not life-threatening but dignity-sapping, from hair uncolored to toenails uncut.

Ninety-year-old Helen Richman, a veteran actress (Playhouse 90) living on her own at the MPTF, has been busy keeping in touch with her children, including a daughter whose New York City family all caught COVID-19 and have since recovered, as well as a movie-producing son, who sends scripts for her to review in her newfound spare time.

The MPTF’s 19 social workers, who work with clients on the campus as well as entertainment retirees who live elsewhere, have largely been caring for individuals remotely. “You have to pay more attention to the nuances to read the body language right now — the pauses in speaking, the way a person engages,” says Linda Healy, who heads palliative care and geriatric services. “Working remotely goes against everything we try to do when we connect with a person.”

In 2017, Dr. Scott Kaiser, the MPTF’s chief innovation officer and a specialist in geriatric medicine, launched a volunteer phoning initiative. He’d come upon research which indicated that loneliness is, as he puts it, “the greatest risk factor of all” for elderly health, as well as “the biggest predictor in terms of early mortality.” The program, known as the Daily Call Sheet, sees more than 100 individuals with industry ties ringing about three times that number of seniors on and off campus on a regular, ongoing basis.

Since the pandemic began, the corps of enlistees who’ve signed on for training has increased by 20 percent. “We are reaching people out in the community who are scared, confused — they don’t know what’s going on, they don’t have reliable information, they feel alone and disconnected,” says Kaiser. “At times they’re rightfully afraid for their lives.”

Fredda Johnson, the MPTF’s director of volunteer engagement, who recently launched a complementary dial-a-senior endeavor in response to the crisis, notes that she’s seen a rise in interest in assistance — from delivering groceries to the submission of videoed birthday greetings to residents — across the industry community. “Giving back gives people purpose,” she explains. “When you can think about something other than yourself, you’re better off.”

With the wealth of normal campus activities suspended, the MPTF’s in-house television operation, Channel 22, has taken center stage. It’s offering more than five hours of programming three days a week. The wide-ranging, interactive schedule — call-in engagement is encouraged — runs from workout classes to trivia games. The residents’ newspaper has now been turned into a news broadcast. Beitcher joins in at noontime for Gov. Gavin Newsom-style informational briefings, which, residents tell THR, have become must-watch television. “Channel 22 is here to remind you that you may feel alone at the moment — but you’re not alone,” says Jennifer Clymer, the MPTF’s director of media, who runs the station.

The salve of Channel 22 aside, Kaufmann misses the communal dining room. “It’s like the Algonquin Roundtable: We sit and crack jokes — it’s more than a place to eat; it’s social. Every once in a while, we break into song, and when it’s over, we go back to the conversation.” Kaufmann pauses for a moment, then underscores: “We don’t do that on Zoom.”