By all objective measures, The Terminator represents the most feared cautionary tale of modern Hollywood: a broken franchise. Thirty-three years after Arnold Schwarzenegger became an international star playing a killer robot sent from the future to kill the mother of the leader of a postapocalyptic rebellion, there have been four sequels (and one TV series), and the three films without the involvement of creator James Cameron have turned off fans and led the property to bounce from studio to studio and reboot to reboot. Terminator: Genisys, a 2015 installment made by financier David Ellison’s Skydance Media (Ellison bought rights from his sister, Megan Ellison, who acquired them in a 2011 auction for $20 million), seemingly, uh, terminated the prospect of future films.

But this is Hollywood 2017, and no major franchise is truly dead. Ellison, along with distributor Paramount (Fox has international rights), has persuaded Cameron, who on Sept. 25 began filming four Avatar sequels, to shepherd a new Terminator for the era of Amazon drones, Facebook news bots and artificial intelligence-fueled anxiety. Calling it “a return to form that I believe fans of the franchise have been wanting since Terminator 2: Judgment Day,” Ellison, 34, has for the past year worked secretly with Cameron and Deadpool‘s Tim Miller, who will direct the untitled sequel for a July 26, 2019, release. They assembled a writers room with scribes David Goyer, Charles Eglee, Josh Friedman and Justin Rhodes as well as Ellison, a lifelong Terminator fan (Cameron himself shows up once a week), and have crafted what they want to be a trilogy with Schwarzenegger, 70, and original star Linda Hamilton, 61, passing the torch to a young female lead.

The team hopes it’s launching the equivalent of the new Star Wars trilogy — but with the most successful filmmaker of all time pulling the strings. To unveil their plans and explain why the Terminator franchise is still relevant amid 21st century fears, Cameron, 63, and Miller, 47, joined The Hollywood Reporter’s editorial director Matthew Belloni for a discussion Sept. 19 on the Paramount lot in Hollywood. An edited transcript follows, and a separate Q&A with Cameron on Avatar, Trump and his recent Wonder Woman critiques is here.

Jim, why do you want to do this? You can do anything. These are movies you made a long time ago.

TIM MILLER I’ve got some pictures on him that he doesn’t want published. (Laughs.)

JAMES CAMERON There’s a pride of authorship in anything that you do, and when David and I started talking about this, it made sense for me to see if there was a way to bring it into this century and to relevance. I look at what’s happening now with the emergence of artificial general intelligence equal to or greater than humans’, and you’ve got Elon Musk and Stephen Hawking and others saying that this could be really bad for the survival of the human race. What was science fiction in the ’80s is now imminent. It’s coming over the horizon at us. And there’s been a resurgence of fear and concern about nuclear weapons and so on. So all of these apocalyptic elements are out there. The first two Terminator films that I did dealt with the angst around that and how we reconcile it for ourselves in a fantasy context. So I got excited about the idea of finding a story that made sense for now.

So what does a James Cameron-produced Terminator movie look like in 2017?

CAMERON This is a continuation of the story from Terminator 1 and Terminator 2. And we’re pretending the other films were a bad dream. Or an alternate timeline, which is permissible in our multi-verse. This was really driven more by [Tim] than anybody, surprisingly, because I came in pretty agnostic about where we took it. The only thing I insisted on was that we somehow revamp it and reinvent it for the 21st century.

MILLER The [first] films are more relevant today than they were when he made them. A lot of it seems like prognostication because it’s coming to be — the world we live in right now.

Are you planning to introduce new stars for future movies, like the Star Wars model?

CAMERON Absolutely, yeah. A lot of this is handing off the baton to a new generation of characters. We’re starting a search for an 18-something young woman to essentially be the new centerpiece of these stories. And then a number of other characters around her and characters from the future. We still fold time in the story in intriguing ways. But we have Arnold’s character and Linda’s character to anchor it. Somewhere across there, and I won’t say where, the baton gets passed, so to speak.

This summer was not a good one for the box office. Why do you think people aren’t going to theaters? What’s the solution?

CAMERON Look, I don’t know what the answer is for the industry at large. I don’t think the industry at large is hurting that much. A lot of the good writing is now in television, and I think that feature films could benefit from better writing and better character work in general and a little less spectacle. Not that I don’t like spectacle, but I like it at the right moment. You just have to make good movies. Pretty simple.

MILLER There weren’t a whole lot of movies that I wanted to go see this year. The Big Sick was, I think, one of the best movies I saw this summer, and it’s not my kind of movie even.

Tim, you’ve made one movie. Do you feel intimidated working with Jim?

MILLER Every minute of the day. But I also feel honored. If Jim didn’t think I could do it, I wouldn’t be there. And that gives me confidence. He could fire me later and decide: “Why did I believe in this guy? He’s a tool.” 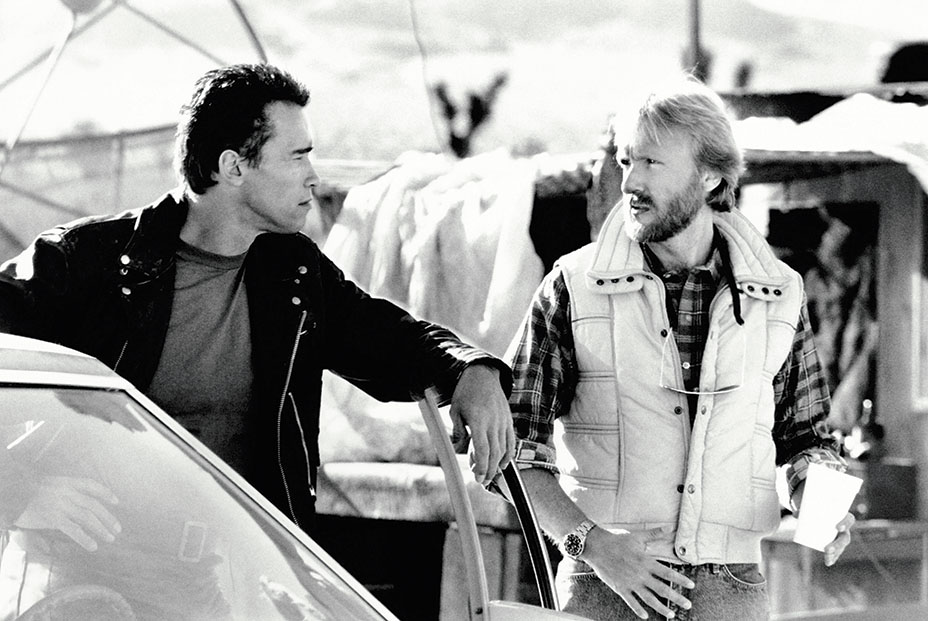 They do that these days. If it was a Star Wars movie, it could happen.

CAMERON Don’t let that revolving door hit you on the back of the head.

MILLER And you know what? It’s a similar situation there. Somebody does a good film, then they think: “Well, he must be a great director.” So, it could totally be true in my case. But I don’t think that’s the case.

Now an uncomfortable question. Arnold is going to be 71 years old when this shoots. How do you get around that fact?

CAMERON: You don’t have to get around it. The beauty of it is: He’s a cyborg. And so, the org part is on the outside, meaning organism. And Reese says it in the first film: “They sweat. They have bad breath.” Because they were supposed to be infiltration units, so there’s this idea that flesh sort of sheaths over a metal endo-skeleton. So that would age normally. So, obviously he’s one that’s been in action and operation for a long time. And that’s all I want to say about the actual story part of it.

MILLER: I haven’t talked to Arnold about this so I could get in trouble. But because he’s been in all the other movies — unlike Linda — I do think there needs to be a reason to be different here. I like my sci-fi grounded. I like my characters grounded. And what Jim said about the exterior aging while the interior remains the same — well, not the interior, as in the brain, as emotionally and intellectually he will have evolved. They’re learning machines. But that’s a way to make it different than it was. Even in Genisys, he looked — I should stop — he was a slightly gussied-up version of the old Terminator. I think we should embrace his age. And that’s what’s going to make it interesting and fresh for the fans.

Jim, you’re handing over the keys to your baby to someone who doesn’t have much experience.

CAMERON Look, we’re both taking a risk. That’s the nature of the director-producer relationship. But I feel really confident. We’re already about seven or eight months into the creative process, and we haven’t killed each other yet. There’s been some fur flying, but it’s always been for the right reason. I feel Tim’s commitment. I feel David’s commitment. They feel my commitment. That’s it. We’re brothers-in-arms at this point. 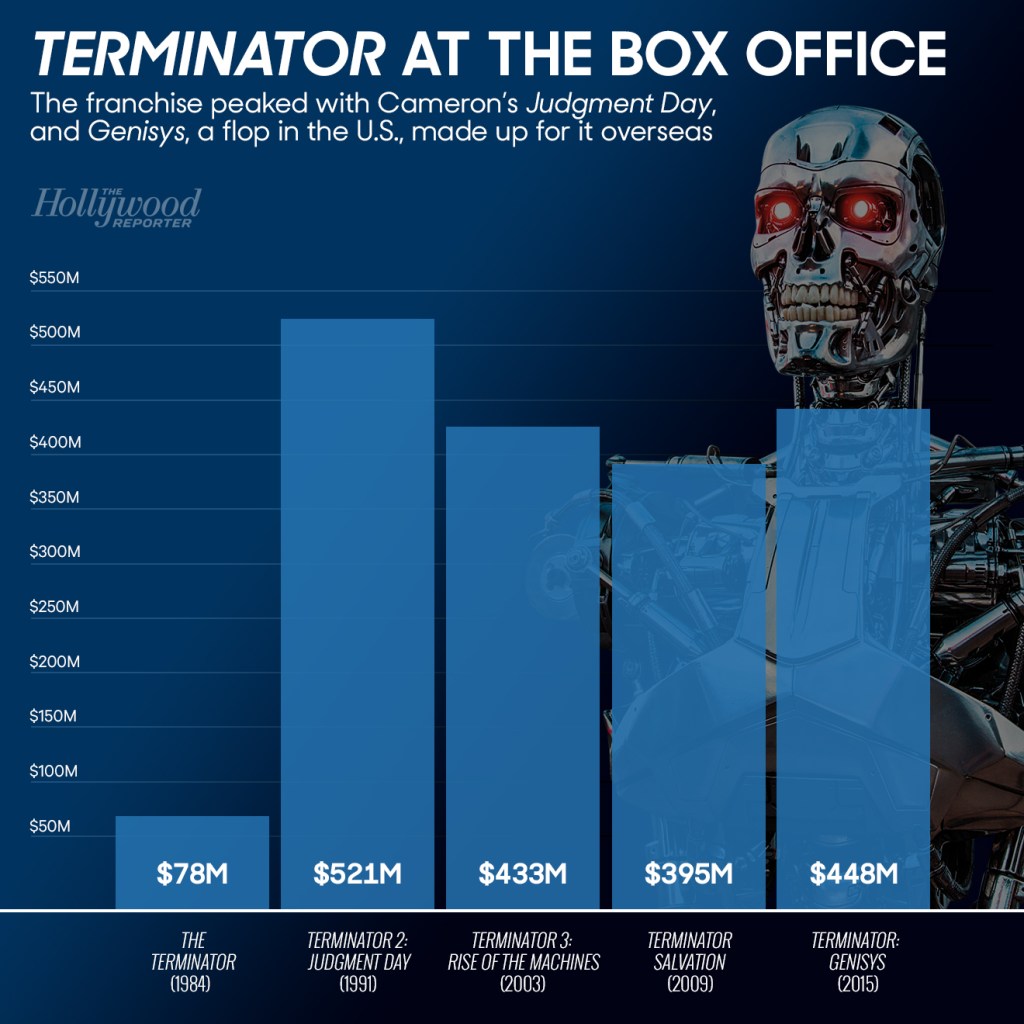 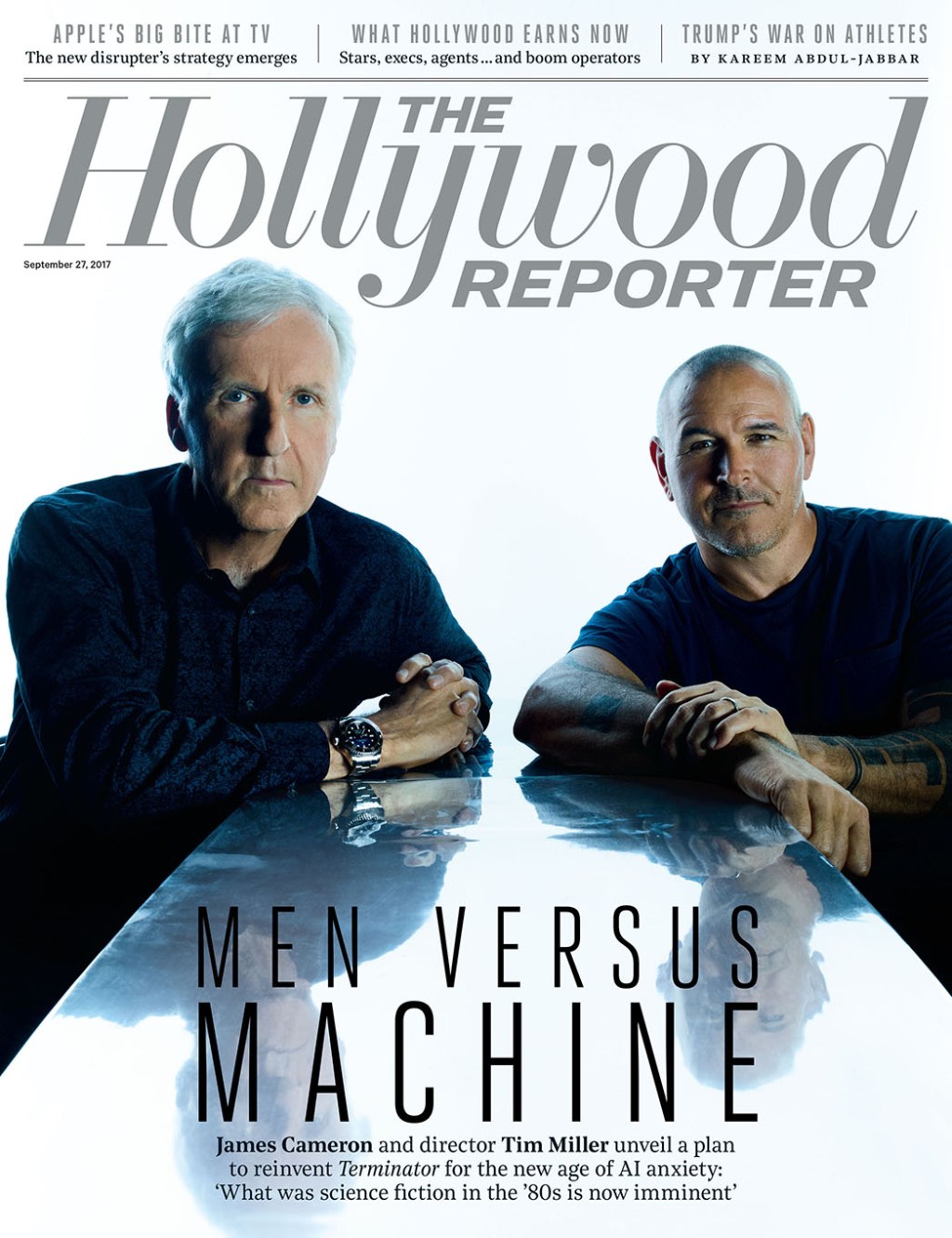