At a quick glance, it’s hard to spot the common thread between Jessica Chastain and Isabelle Huppert. “Other than we both have red hair,” says Huppert with a laugh. The two actresses, the former hailing from the Bay Area and the latter from Paris’ 16th arrondissement, first met in Paris six years ago following Chastain’s Cannes debut in Terrence Malick’s The Tree of Life. They went on to appear together as mother and daughter in the Disappearance of Eleanor Rigby trilogy, with the installment Them making its world premiere at the Palais in 2014. With Cannes celebrating its 70th anniversary, between the two, they’ve attended nearly half the fests (Huppert has more than 30 Palais appearances to her credit). This year, both will be on hand — Chastain, 40, as a member of the jury and Huppert, 64, walking the red carpet for Michael Haneke’s refugee crisis ensemble Happy End. With the charming habit of finishing each other’s sentences (“It’s really not such a surprise we have this …” says Huppert, “… this rapport,” offers Chastain), Chastain and Huppert spoke with THR about their first time on the Croisette and the highs and lows of playing to the sometimes ruthless Cannes crowd.

How did you two meet?

CHASTAIN When Tree of Life went to Cannes, all the interviewers were asking me about my favorite actors and actresses because I was new to the industry, and they wanted to get to know me. I was always gushing about this little, unknown actress Isabelle Huppert. (Laughs). Everyone kept saying, “She’s here.” And so they were trying to get an introduction. We had dinner in Paris. And when I said to her: “Oh, I love you. You’re my favorite actress,” she goes, “I know.” (Laughs.) Because that’s how much I was talking about it. 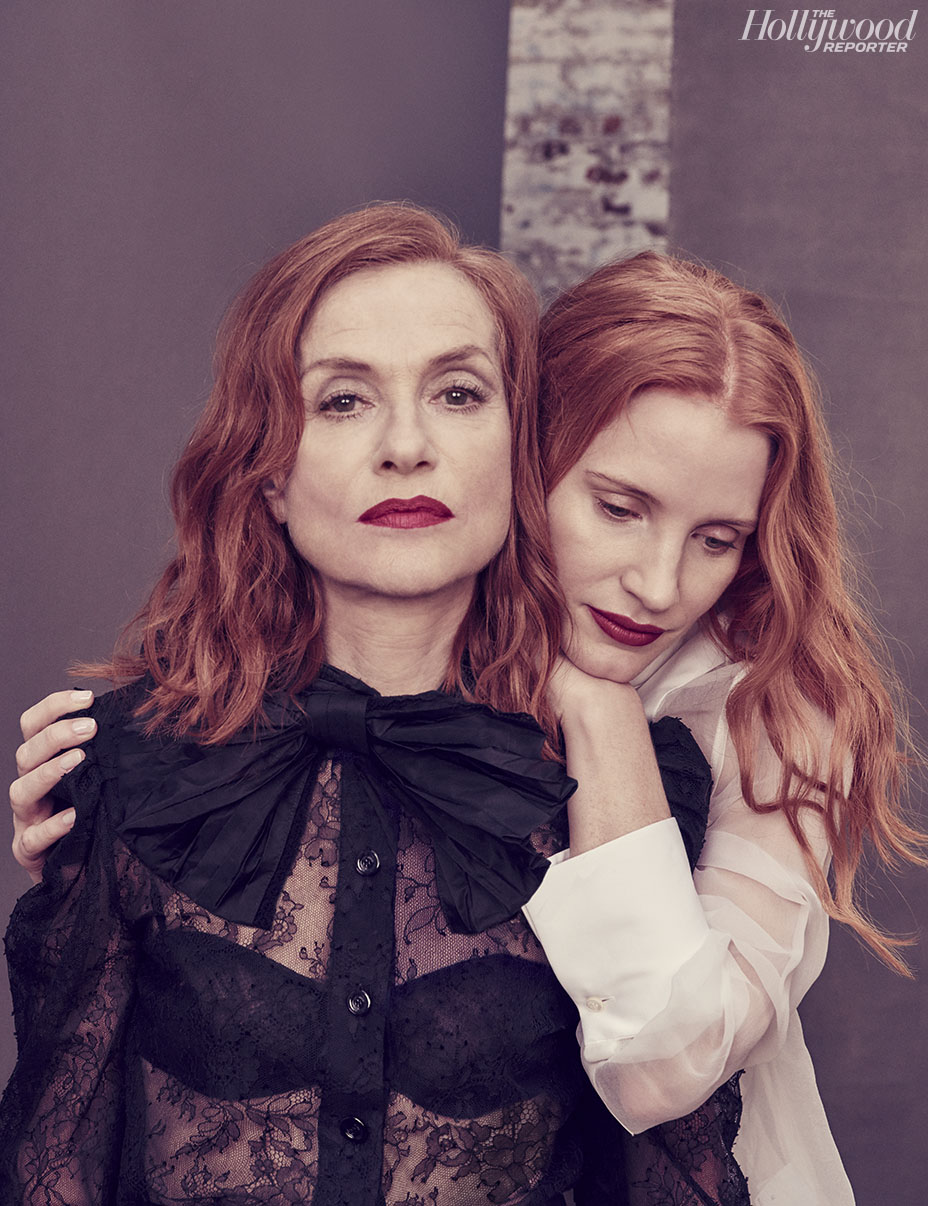 What’s Cannes like now versus the first time you attended?

CHASTAIN The first time I was scared to death. I didn’t understand the audience. At the first red carpet for Tree of Life, I didn’t even know what to expect. I had never even seen pictures of that red carpet. So when I arrived, Brad Pitt and Sean Penn each grabbed a hand and we walked the carpet. They basically held me up. And the whole time they were saying things like, “OK, now we’re going to smile. Now we’re going to turn. OK, that’s it, Jessica.” Like, they were really coaching me. And you can see in the pictures where I’m going up the stairs, they never let go of my hands. It really was a scary, wonderful experience for me.

HUPPERT When I first went to Cannes — I don’t want to sound like a veteran — but it was the previous Palais. Everything was smaller. Now, the distance to the Palais is bigger. The stairs are a lot bigger. It was less people, less distance to cover. Once you’ve done it twice or three times, it’s only pleasure. The first time is a shock because all these people are shouting your name, and you feel like you have to stop for each camera, which is impossible.

What would you change about the festival?

CHASTAIN The traffic. I did a press day, and I had to go to the hotel to change for the premiere, and I realized I had no time. So I actually got out of the car because the cars weren’t moving and — in my heels — I just started running down the Croisette. And all these people were like, “Jessica Chastain. Hi.” And I was, like, waving at them but running to my hotel room.

HUPPERT I wouldn’t change anything.

What’s the most surprising thing that happened to you in Cannes?

HUPPERT My two best actress awards. It’s a shock. No?

HUPPERT It was a surprise. I remember clearly. 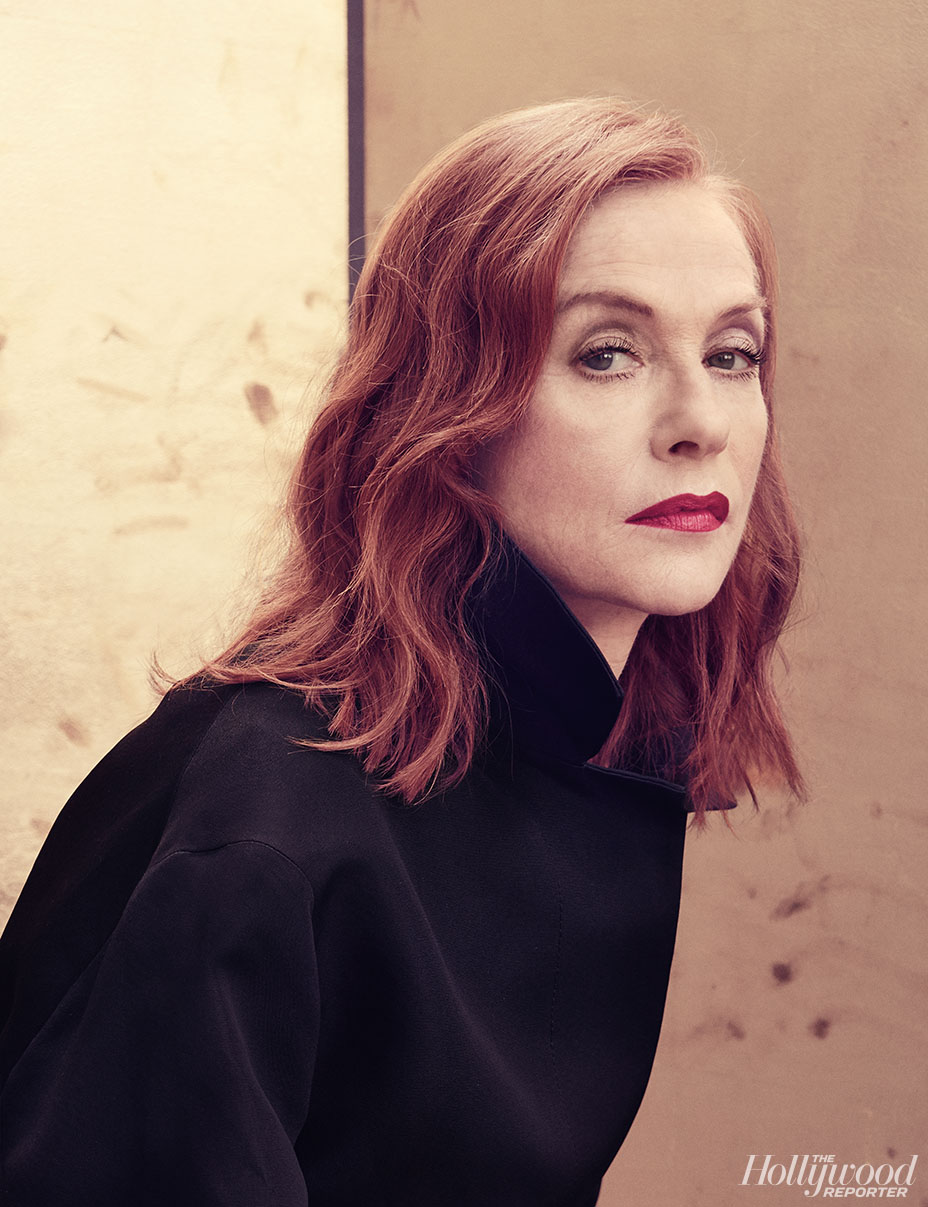 CHASTAIN For me, I would say The Tree of Life winning the Palme d’Or. And then Take Shelter won Critics’ Week. The festival is very emotional for me because my dream my whole life was to be an actress. And I was born at this festival as an actress.

HUPPERT When you think about Tree of Life and what Jessica did in that film, it was so unique. It’s about how she moves. There was something that was beyond acting. And that’s really why it was so strong.

CHASTAIN (Nuzzling into Huppert) To hear you say that, it means a lot to me, so thank you. 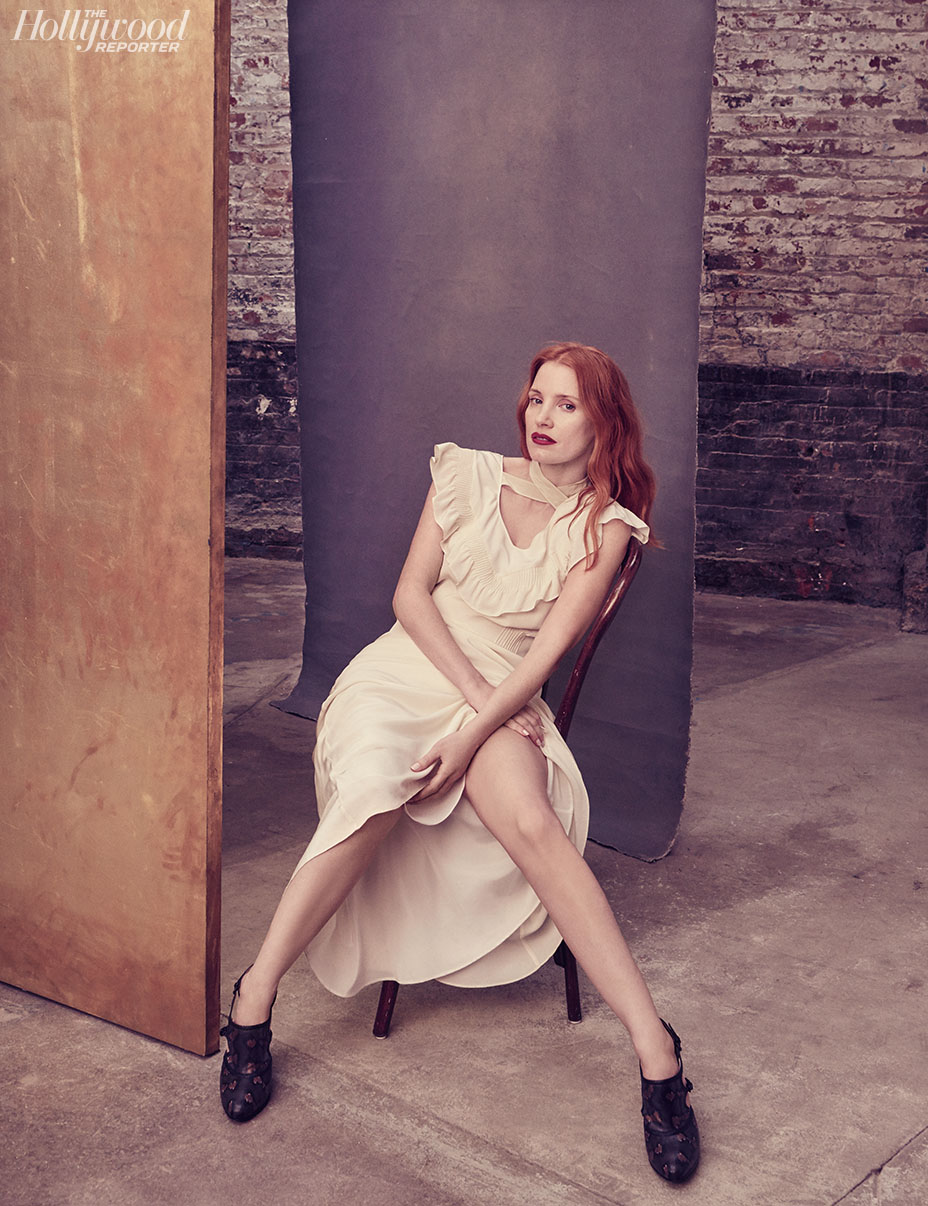 HUPPERT Most difficult was when I was in Malina, by the great German director Werner Schroeter. It’s exactly the type of film [a downbeat relationship drama] that Cannes can be dangerous for. The reception wasn’t friendly at all. People were walking out of the theater. But I didn’t care. We have to be prepared for these kinds of reactions. It doesn’t make a definitive statement on the quality of the film.

As a former president of the jury, did you give Jessica advice?

HUPPERT No, I just told her that it’s a wonderful experience. You are a privileged spectator to watch all these films. 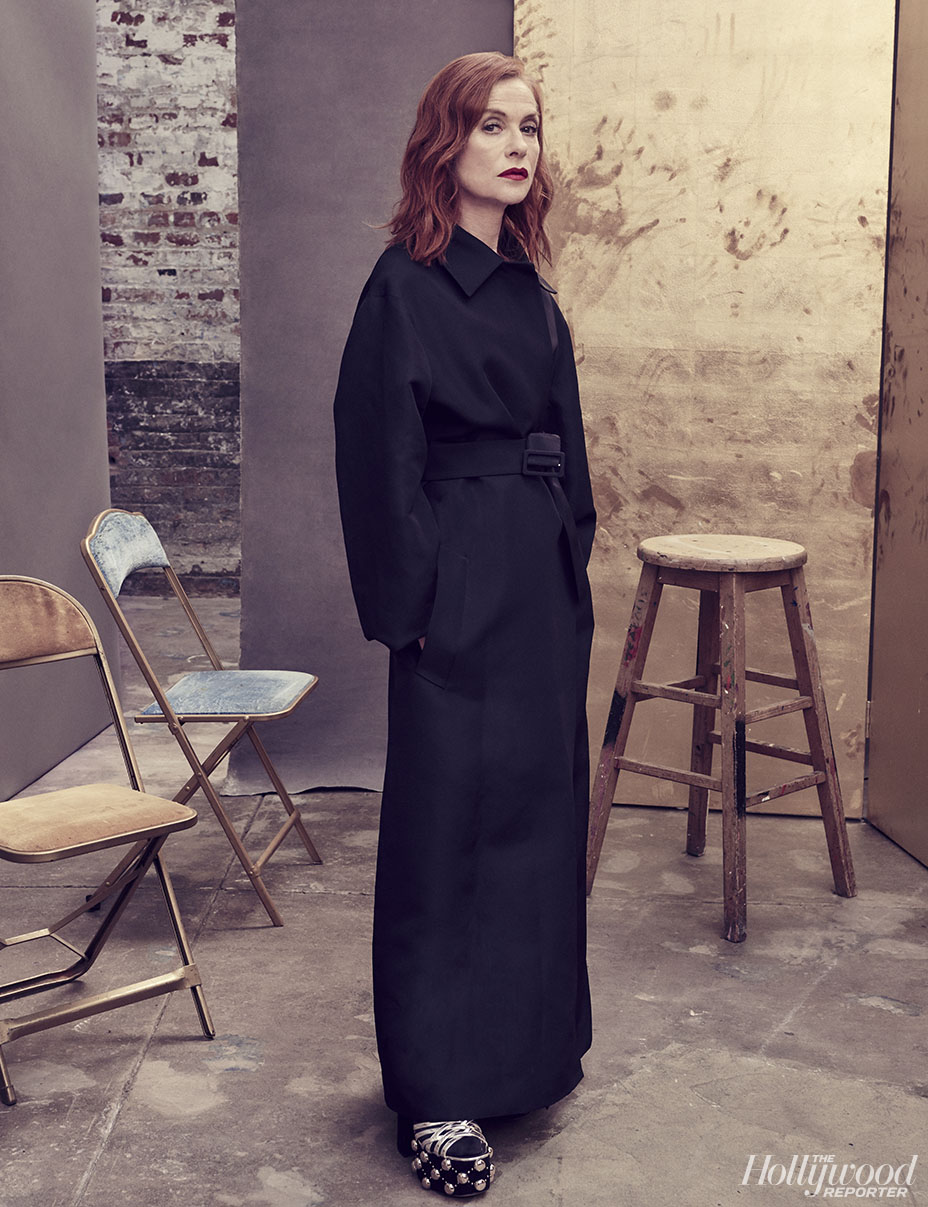 As feminists, do you think the industry is getting more progressive?

HUPPERT There is still a lot to do.

CHASTAIN A lot of people in this industry are shocked by the [Trump] administration and things that have been said, the divisiveness that’s been created. Well [is this industry] so different? Ninety-three percent of filmmakers are men and only 7 percent are women, and 3 percent of DPs are female. It clearly shows there is discrimination happening. Talk is cheap. But what are you actually doing to move the needle? 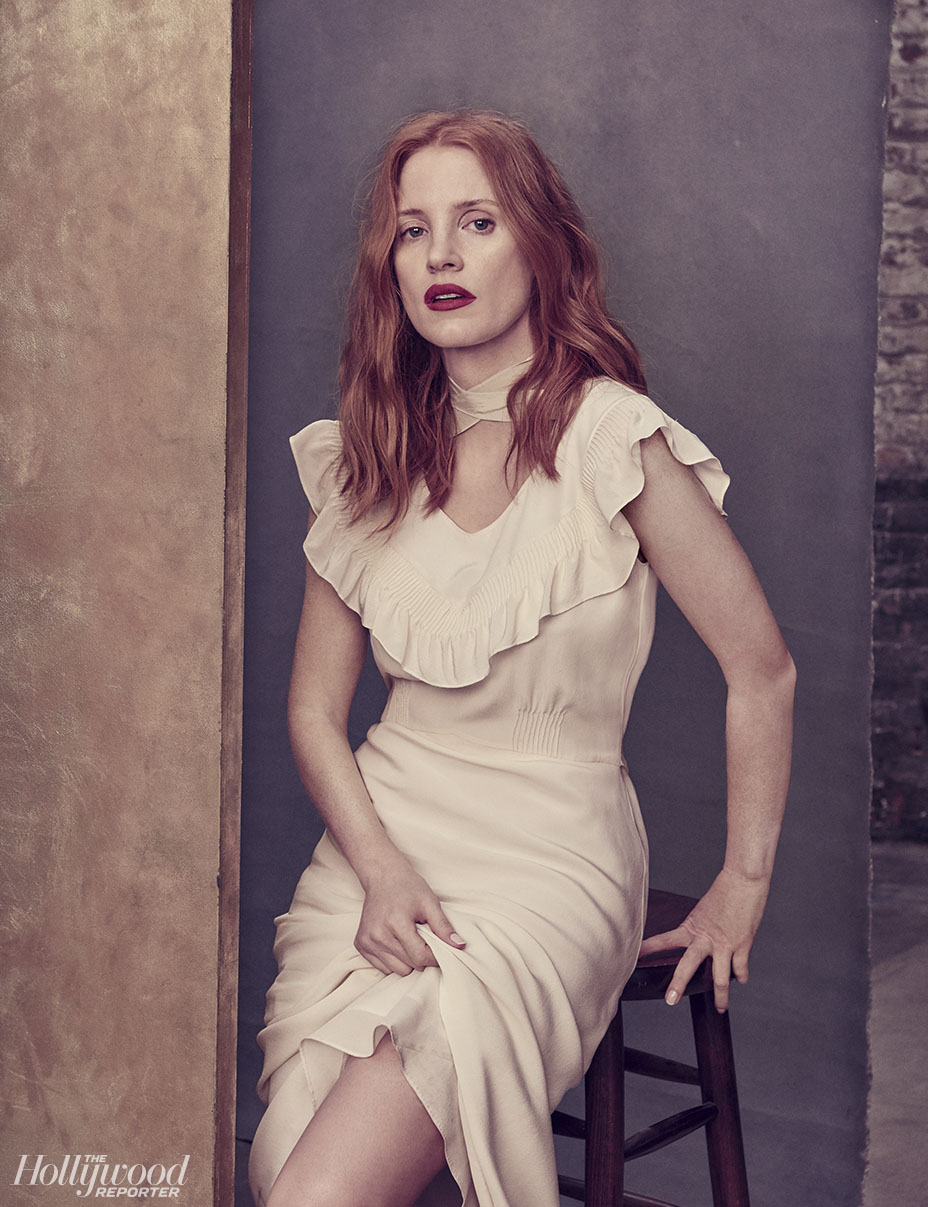 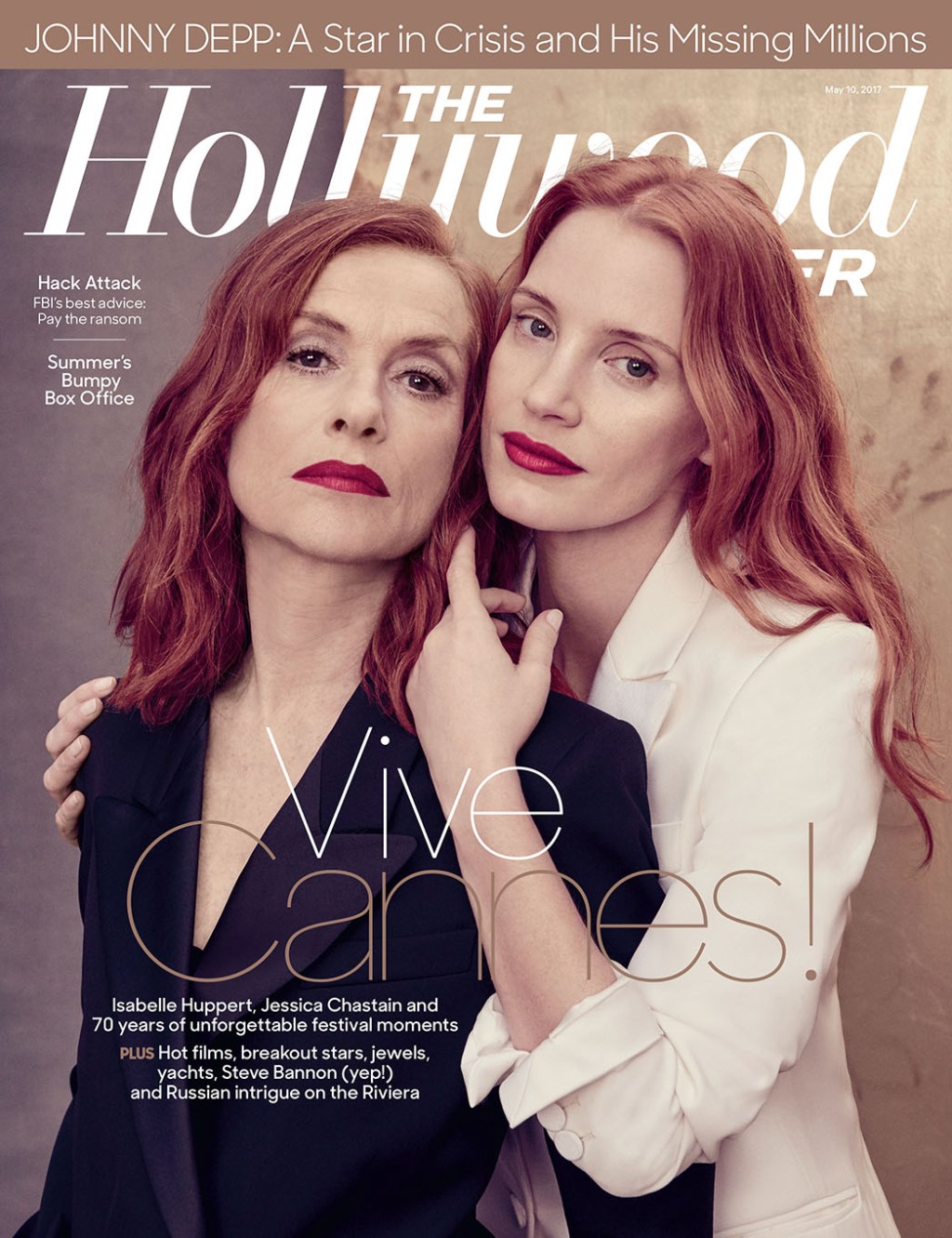