In his 2014 book Creativity, Inc., Ed Catmull, president of Walt Disney Animation and Pixar Animation Studios, revealed his management of Pixar includes a process called “Notes Day,” in which all employees are afforded the opportunity to offer “notes” to their leaders on how to improve the company, its culture and its creative output. What Catmull did not explain in the book is that some Pixar employees had used Notes Day to express mounting concern over the behavior of the company’s co-founder and chief creative officer, John Lasseter.

So when Lasseter, 60, notified colleagues Nov. 21 that he would be taking a six-month “sabbatical” from his role as Disney’s top animation executive because of “missteps” that have left colleagues feeling “disrespected and uncomfortable,” several company insiders say they were not surprised. As he was building Pixar into a pioneer of computer imagery and creativity — and then returning a foundering Disney to its former glory — Lasseter had developed a reputation for relentless borderline bullying conduct and for crossing lines into employees’ personal space in the workplace.

Now Lasseter, perhaps the most important figure in feature animation since Walt himself, has left the empire he helped build in a precarious position. There is the short-term question of who will take the creative reins in his absence — and the larger issue of who might succeed him permanently should he not return. The answers could impact the legacy that Disney CEO Bob Iger leaves behind when he himself steps down in 2019.

As part of his remake of Disney, Iger’s first big coup was acquiring Pixar in 2006 for $7.4 billion. Since then, the company, co-founded by the late Steve Jobs, has turned out a string of hits, from Cars to the current Coco, that have grossed more than $8 billion worldwide. At the center of it all was Lasseter, whose public image was that of a genial, Hawaiian shirt-wearing family man who brought his own obsessions with toys and cars to the screen. When he took over Disney Animation, he led a renaissance with such hits as Frozen, Zootopia and Moana.

“The impact of John’s stepping aside can’t be overestimated,” says Dan Sarto, co-founder and publisher of Animation World Network. “That said, he has also developed and helped foster a tremendously deep and talented group of artists that should be able to step up and fill the void to a big degree. We will soon see if that’s the case.” 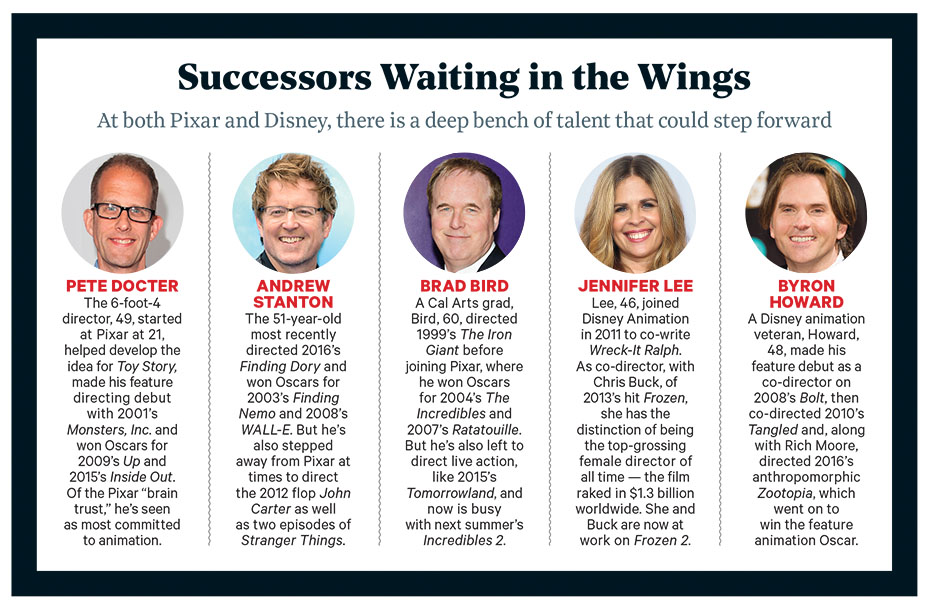 There’s evidence that suggests Disney knew it had a potential problem on its hands. Lasseter was a notorious hugger (The Wall Street Journal once photographed him giving 48 hugs to men and women in a single day), but to some, the embraces went too far. One longtime Pixar employee says Lasseter, a winemaker who often drank heavily at company social events, also was known by insiders for “grabbing, kissing and making comments about physical attributes.” This source says the behavior was not always confined to event settings.

One former Pixar employee, who worked at the Emeryville, California, studio during its early years, recalls that when she was alone with Lasseter, she was subjected to “unwanted touching. For the duration of a conversation, he’d have his hand on my upper inner thigh. He’d put his arm around me and pull me toward him, a brush against a breast.” She says this sort of behavior went on several times a week for more than a year — and coupled with exhaustion from the long hours, it left her feeling “disgusting” and “depressed.” (A second Pixar employee corroborated her story.) She finally quit.

This source declined to allow The Hollywood Reporter to publish her name, and another Disney insider notes there are others with similar stories who are still afraid to come forward, even as Hollywood has been flooded with reports of harassment in the workplace in the wake of the Harvey Weinstein scandal: “Because of the uncertainty of whether John will be back in six months or not, there is still fear in the air about speaking up.”

Disney declined comment, but one studio source, while acknowledging that Lasseter may have crossed professional boundaries, characterized his behavior as overly affectionate. When Lasseter apologized and went on leave, Disney said the company supported his sabbatical (Lasseter also is dealing with the loss of personal property in the recent Northern California fires) and is “committed to maintaining an environment in which all employees are respected and empowered to do their best work.”

According to several sources, the studios’ leadership — Catmull; Andrew Millstein, president of Disney Animation; and Jim Morris, president of Pixar — recognized Lasseter’s behavior was problematic. One source says it was “well known through the executive ranks.” But given Lasseter’s creative brilliance and track record of delivering hit after hit, “they shielded and protected him,” adds a longtime Disney insider. This source adds that multiple employees “had talked to HR.”

Now, in Lasseter’s absence, the speculation is that a member of Pixar’s storied “brain trust,” the animation directors who meet regularly to review one another’s work, will be asked to step forward. The most frequently heard name is Pete Docter, the two-time Oscar-winning director of Up and Inside Out. But some are eyeing Andrew Stanton, who won Oscars for Finding Nemo and Wall-E, or Brad Bird, who won Oscars for Ratatouille and The Incredibles (though Bird might have his hands full directing Incredibles 2, opening June 15).

Stanton and Bird have spent time away from Pixar to direct live-action films, which may give the advantage to Docter. Says a source: “You need someone who is all in, dedicated to doing animation. That is Pete.”

The company also could choose a female talent. Of Pixar’s 19 feature releases, only one, Brave, had a female director, though Brenda Chapman was replaced by Mark Andrews during production, and they shared the directing credit on the Oscar winner. Rashida Jones, a writer on Toy Story 4 who then left the project, has said the studio fosters “a culture where women and people of color do not have an equal creative voice.” The likeliest female candidate is Darla Anderson, producer of Toy Story 3, Cars and Coco.

At Disney Animation, those who could take on a bigger role include Frozen‘s Jennifer Lee (the rare woman director on the team); Zootopia directors Byron Howard and Rich Moore; Chris Buck, who is helming Frozen 2 with Lee; Chris Williams and Don Hall, Oscar winners for Big Hero 6; and the studio’s elder statesmen, Ron Clements and John Musker (Aladdin, The Little Mermaid and, most recently, Moana).

The two studios’ next few releases are set. After Incredibles 2, Pixar will have Toy Story 4 in 2019, which Lasseter was set to direct before he stepped aside from the role in 2015. Disney has two sequels in the works: Ralph Breaks the Internet: Wreck-It Ralph 2 for 2018 and Frozen 2 for 2019. But given the longer lead time needed to develop animated features, both divisions will soon have to commit to future projects. Meanwhile, the Mexico-set Coco opened strong but must traverse awards season without being dragged down by the controversy.

Iger probably will be the one to decide whether Lasseter can return. “The key to all this is Bob Iger’s legacy,” suggests a source. “Everything is about preserving his legacy, and if Lasseter’s behavior threatens to tarnish that, they will throw John to the wolves.”

Borys Kit contributed to this report.

This story appeared in the Nov. 29 issue of The Hollywood Reporter magazine. To receive the magazine, click here to subscribe.