In October 2017, Julia Louis-Dreyfus strode into the Luxe Hotel on Sunset Boulevard for a morning meeting with fellow comedic A-lister Will Ferrell. Somehow, the two had never collaborated. In fact, they had never even met despite both working at the highest stratum of the comedy world for more than two decades.

“She was wearing this black leather jacket and jeans, like Pinky Tuscadero. Like, ‘All right. Hey. How ya doing?’ ” Ferrell recalls. “But we immediately started kind of bantering, very much at ease, had a fun kind of comedy shorthand with each other.”

Louis-Dreyfus was simply stuck on the fact that they managed to never intersect. After all, both became household names during the ’90s thanks to NBC comedies — she as Seinfeld‘s Elaine Benes and he as a Saturday Night Live player. She and her husband, Brad Hall, also are SNL alums, though that was before Ferrell got there.

“I remember thinking to myself, ‘How is it even fucking possible I have not crossed paths with this guy before?’ ” says the Veep star. “We’re of like minds, immediately hit it off and have so much in common. It was just love at first sight, you know?”

Staying focused on the task at hand, she made her pitch to enlist the Anchorman star to join her in an English-language remake of the Swedish art house darling Force Majeure, about the fallout from a father choosing to save his own life over his family’s. Ferrell’s agents already had sent him the script written by Jesse Armstrong, who bridges their careers as a writer on Veep and the creator of Succession, which Ferrell executive produces. No director was in place for the film, rechristened Downhill, and Louis-Dreyfus would be making her debut as a narrative feature producer. Still, Ferrell didn’t hesitate before committing. But before finishing their coffees, Louis-Dreyfus advised him to go home and watch the original, just to make sure he understood the tone — something darker and more subtle than a typical Ferrell movie. 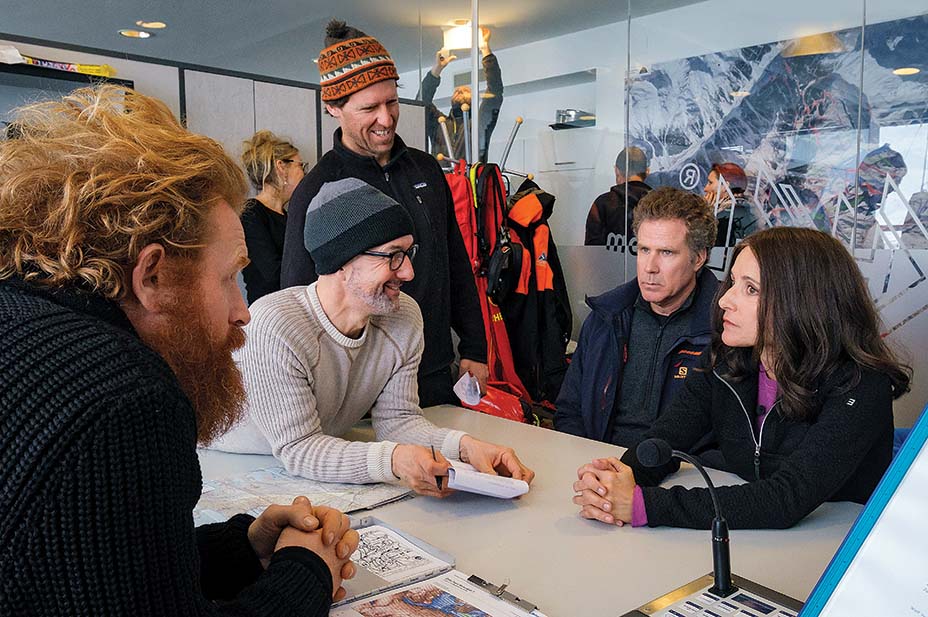 “She was afraid I was going to be scared off, but it made me like the project even more,” he explains. “I emailed her right away and said, ‘I think I’m crazy, but even I loved how austere Force Majeure is.’ ”

Fifteen months later, Downhill began shooting in Austria with Nat Faxon and Jim Rash of The Way Way Back at the helm. The Feb. 14 Searchlight release — not quite comedy, not exactly drama and with the specter of tragedy hovering — follows a married couple (Louis-Dreyfus and Ferrell) who have hit a wall in their relationship and take a family ski trip to reignite the long-extinguished spark. Complete with a terrifying avalanche, a volcanic fight and two stars taken well outside their comfort zones, Downhill makes its world premiere Jan. 26 at Sundance, an apt setting with the Wasatch mountains looming.

Back in 2014, executives from Fox Searchlight approached the actress about reteaming following the release of Enough Said, a film that featured the late James Gandolfini and Louis-Dreyfus in an unlikely romance. They floated the prospect of a remake of Force Majeure, a film that had just earned raves in Cannes. She checked out the Swedish hit and remembers being “blown away by it” and started to envision a remake with “a more American sensibility.”

“I really wanted to play this character,” she says of the mother of two grappling with the actions of her husband in the face of danger. “That kind of motivated me to stick with it.”

So the actress partnered with Enough Said producers Anthony Bregman and Stefanie Azpiazu and began developing the material. She approached Faxon and Rash, with whom she had met on an unproduced film called The Birches that they were developing with Alexander Payne. The directing duo signed on for Downhill but then got sidetracked (Faxon and Rash work nonstop as writers, producers and actors, both in film and TV). So she decided to lock in her leading man first and turned to Ferrell for Downhill’s protagonist, an emotionally distant partner drowning in midlife ennui. It was a bold choice given his long résumé of laugh-out-loud humor.

“I’d seen him in Stranger Than Fiction. He’s a really capable dramatic actor, and that’s what was enticing to me,” she explains. “Obviously, he understands different kinds of comedy. This movie of course has comedy, but it’s sort of born out of characters and it’s kind of smaller, behavioral. I just knew he could do it.”

With Ferrell on board, the director search resumed. After some fits and starts, Faxon and Rash suddenly were available again.

“It was great to get those guys,” says Ferrell. “It landed with who it was supposed to land with.”

Never mind the Faxon-Rash landing, even the Downhill takeoff proved to be kismet. Ferrell recalls showing up at LAX for his flight to Austria when he bumped into Louis-Dreyfus, who had just wrapped the seventh and final season of Veep.

“We didn’t know we were on the same flight until we were at the airport. Like, ‘Great. We’ll be flying out together,’” he says.

As the cameras began rolling on the 38-day shoot, Louis-Dreyfus shifted into full producer mode, a new sensation for her even though she has executive produced for television. Ferrell, who has simultaneously acted and produced films, says Louis-Dreyfus took the role to a new level.

“The times I’ve done it, I was really more a creative producer,” he says. “But Julia was amazing in that she’s finishing up an emotional ending of Veep, going right into this project and, not only being the lead actor and giving script notes, I would hear like, ‘Guys, we have that 3 o’clock call with the studio.’ She’d be on every call and was really impressive with the way she was able to multitask and ask great questions, provide great insights.”

Louis-Dreyfus enjoyed at least one of the perks of wearing both hats, noting with a wry laugh, “You can fire everybody you want to.”

As for acting, several sequences in the film required the full spectrum of emotions, particularly an epic fight between the stars that plays out uncomfortably in front of another couple (Zach Woods and Zoe Chao). Faxon and Rash shot the 12-page scene in a single take over and over again for three days straight.

“It was pretty rigorous from an acting point of view and required a lot of concentration,” says Louis-Dreyfus, who likened the experience to a play. “But it was fun because it was just the four of us in this little, small space, and our directors were off in the bedroom with the monitors. It took a lot of emotional wherewithal to get through it.”

Rash broke up tension after every cut by suddenly throwing open the door and shouting like an old-time Broadway producer, “The reviews are in, and the show is a hit!”

“We were laughing so hard, just like tears coming out,” says Ferrell. “It was the silliest thing that was so unexpected and appreciated all at the same time.”

Adds Louis-Dreyfus, “God damn it, it was hilarious.”

Less than hilarious was the weather. The conditions were frigid, with more than one unexpected squall shuttering production. Adding to the challenges, the shoot took place at an active ski resort, “so it wasn’t like some kind of place where you shut things down,” says Faxon. “No one was having it. They came for a ski vacation. They didn’t come to watch this movie get shot.”

Once production wrapped in March, Louis-Dreyfus rolled up her sleeves and headed into the editing bay with Faxon, Rash and editor Dave Rennie, a process she found “exhilarating.”

“I’m amazed to watch how a movie can just get elevated,” she notes. “Sometimes you’re watching and you go, ‘Oh my God, it’s such shit!’ A few edits later, it’s something completely transformed.”

The final product offers a portrait of a man and woman unrecognizable to fans of the narcissistic Selina Meyer and the hubristic Ron Burgundy. Or, as Faxon describes Louis-Dreyfus’ performance, “Julia’s nice long arc, balancing comedy and drama and the vulnerability and frustration and anger and all that stuff in one fell swoop.”

Rash echoes that characterization, this time for Ferrell. “Will brought such a wonderful sensitivity and depth to the role that I think really enabled us to kind of explore the character’s dichotomy, much like we tried to do with Steve Carell in The Way, Way Back — just sort of casting against type and to create sort of a more likable and interesting character as opposed to just a one-dimensional villain,” he says.

As the Downhill team reunites in Park City, the looming question now is whether they will have a chance to hit Utah’s expert trails. Ferrell, who just spent the Christmas break in Utah, is a competent skier. Louis-Dreyfus is a pro. But Faxon is the best of all — “like a beast on the slopes,” says Louis-Dreyfus, who is making her first trek to Sundance. “It’d be fun to go skiing as a group again.”

As for any plans to produce another movie, Louis-Dreyfus doesn’t hesitate: “Oh, abso-fucking-lutely.”