At its Hollywood premiere, Black Panther received a rousing standing ovation. What’s impressive is that this ovation occurred before the movie was shown. Equally significant is that presales for tickets have broken Fandango’s record for the Marvel Cinematic Universe. Also, in the weeks before the film was set to open Feb. 16, more than 200 grassroots campaigns in black communities from Denver to Toronto to Ghana were arranging screenings in order to commemorate the movie event. This is an unprecedented global rallying for something that doesn’t include Beyonce. All this fuss over a superhero movie?

Black Panther is not just another comic-book film but a cultural spearhead disguised as a thrilling action adventure. You may go for the hard-core action and hard-muscled bodies, but, if you’re white, you’ll leave with an anti-“shithole” appreciation for Africa and African-American cultural origins. If you’re black, you’ll leave with a straighter walk, a gratitude for your African heritage and a superhero whom black children can relate to.

When I asked director and co-writer Ryan Coogler recently why he thought there was so much anticipation for his film, he said, “The concept of an African story, with actors of African descent at the forefront, combined with the scale of modern franchise filmmaking, is something that hasn’t really been seen before. You feel like you’re getting the opportunity of seeing something fresh, being a part of something new, which I think all audiences want to experience regardless of whether they are of African descent or not.”

It’s not that we don’t have worthy black superheroes right now. Luke Cage (Netflix) and Black Lightning (The CW) are as relevant as Black Panther to today’s social and racial climate and as admirable as cultural heroes. Each valiantly fights to preserve the values and safety of his community. Ironically, Luke Cage’s black skin — which once made him a victim and now makes him invulnerable to most weapons — is a bold metaphor for African-American empowerment. Black Lightning is Jefferson Pierce, a high school principal with the power to control electricity. But his real heroics are when he battles to give his students a decent education, his family a loving father and his community an unwavering leader. About 2 million people watch the show, but with Black Panther, a global audience, many of whom aren’t white, will see it. It’s a little like witnessing the unveiling of an enormous statue on the public square — with the public square being the world — of Rosa Parks, Martin Luther King Jr., Malcolm X and Nelson Mandela dressed in bright dashikis. It’s an homage to who we were, a celebration of who we are and an inspiration for what we hope to become. 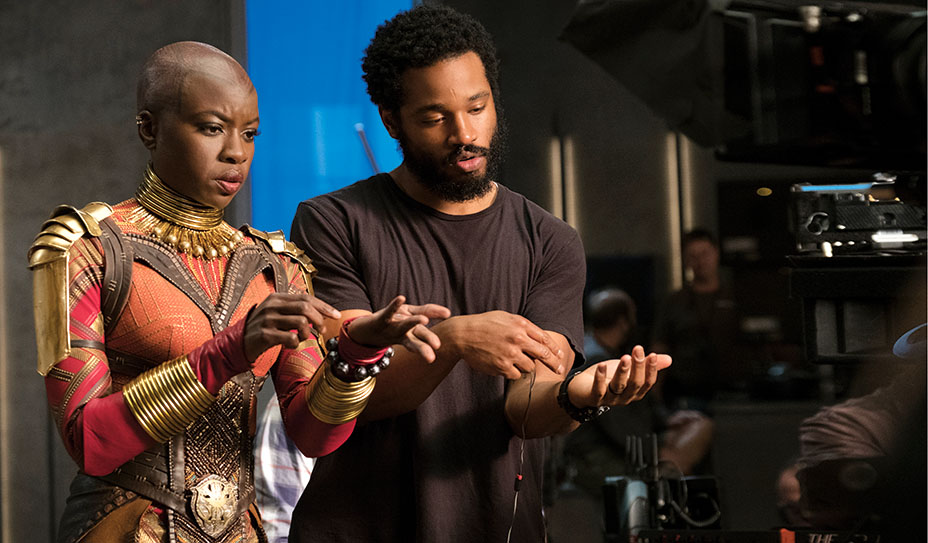 Yet the film is never preachy or strident. Throughout our conversation, Coogler emphasized that Black Panther aims to please people of all ethnicities and nationalities — a fun time for all moviegoers. Coogler, though, hopes they’ll get a little bit more. “I hope they take out of it a sense of enjoyment [but also] something that is not disposable, you know? From my perspective, things that are associated with the continent of Africa are often things that are associated with triggering the feeling of shame inside of me when I see them.” That insight, that African-Americans have been subliminally programmed to feel shame about Africa — in part because we learn so little about it in public schools and in part because politicians like President Trump openly degrade it — motivated Coogler to visit Africa in preparation for the film. The trip enlightened him in a way that he hopes shows up in the movie: “If this film can give people who are of African descent a feeling of pride, even in the theater, that’s a bonus I wouldn’t even be able to comprehend as an artist.”

Paul Simon once sang that “every generation throws a hero up the pop charts.” It’s the same with black action heroes, each reflecting their time period: Sidney Poitier in In the Heat of the Night was a genteel, well-mannered but forceful detective demanding respect — a perfect role model for the heart of the civil rights movement, when blacks had to be firm but not scary to white audiences. Then, in frustrated reaction to the stalled civil rights movement, arrived the grittier street-smart films of the ‘70s: Shaft, Super Fly, Foxy Brown and the parade of blaxploitation characters who spoke street jargon and swaggered in campy outfits. They proclaimed the Good Negro was retired, and the in-your-face black hero — who made no apologies, asked for nothing and expected nothing — had arrived. Then, with the political backlash against black advancement in the ‘80s and ‘90s came a lull in black action heroes, with most appearing as buddies to white cops (48 Hrs., Lethal Weapon, Running Scared), suggesting racial tensions were more for comic relief than an urgent problem. Today, with the Trump administration systematically undermining all marginalized groups, with the rise of Black Lives Matter and with the spread of athletes taking a knee during the national anthem, is Black Panther an action hero for our times?

“Right now, superhero stories are kind of the modern myth-making,” says Coogler of T’Challa, his African protagonist. “He has a timeless quality to him because he is a king.” What makes him a hero for our times is his Hamlet-like intensity about what kind of king he should be: one who blindly follows in his ancestors’ traditions, which have kept his country of Wakanda prosperous and safe but isolated, or one who will risk all that to embrace a larger concept of community. As so magnificently played by Chadwick Boseman, T’Challa doesn’t have the stern indignation of Mister Tibbs, nor the righteous certainty of Shaft, nor the smirky aggressiveness of various Will Smith heroes. Instead, he is humble and conflicted about his own identity, which makes this basically a millennial coming-of-age story about finding his voice and using that to lead his people out of hiding and into a rich, diverse global community. In an era of “America First,” that’s a hero for our times.

One misstep is the hand-to-hand combat that anoints T’Challa the Black Panther and king of Wakanda. While physical prowess is necessary for an action hero, it is not the main attribute of a king. I would have preferred to see a challenge that involved a combination of intelligence, wisdom and athleticism over just brawling. The fights undercut the logic of Wakanda being so technologically advanced.

Coogler also saw T’Challa as a timely reflection of today because “even though he is incredibly powerful, he has so many incredible women around him who are empowered to do what they are able to do in the film”: Be brave, smart and just as ass-kicking. This aspect is even more powerful because there is never any discussion about “strong women”; they are accepted as equals as if there had never been any doubt about it in Wakanda’s history. That’s what true equality looks like. Another rewarding distinction is the film’s sympathy for its villain, Erik “Killmonger” Stevens (Michael B. Jordan). Rather than the typical crazed megalomaniac, Stevens is the embodiment of justified black rage at being treated like the White Man’s Burden as well as being betrayed by his own people.

The MacGuffin that Stevens is after is vibranium, an ore from a meteor that allowed Wakanda to prosper technologically beyond the rest of the world. Vibranium seems like a symbol for everything taken from Africa, from natural resources to cultural identity to actual people. “I couldn’t agree more,” says Coogler. “Because of what has happened to the continent over time, it’s been systematically stripped of those things. And the people there on the continent tend to not have financial control over the things that could potentially bring them value. So I think that Wakanda is the ultimate African fantasy, a place that was able to maintain dominion over their natural resource, able to control it, able to use it to grow, scientifically and culturally, and able to defend it from people who want to take it.”

For many, Black Panther is an ethno-sensitive weather balloon being released in the pop cultural atmosphere to test which way the financial winds are blowing. Can a movie that costs $200 million to make and another $150 million to market with a mostly black cast and set in Africa be as successful as movies featuring white superheroes?

The answer is important, because it determines if black artists will have the opportunity to tell their truths and stories to a mass audience. Not just the conventionally accepted stories about slavery, racism and social oppression. In general, marginalized groups — people of color, women, LGBTQ, immigrants — are relegated to telling stories of being victimized. And while that is an essential element of our lives, it does not define who we are. We also have our coming-of-age Lady Birds, our guilt-and-redemption Three Billboards, our steely-and-sexy James Bonds as well as other stories of daily trials and tribulations that all people share.

So while we gather to celebrate Black Panther, we also are waiting to exhale — to see if this is a phenomenon that, whether successful or not, catapults us ahead or pushes us back to square one. Black audiences have been here before, feeling we are on the edge of being asked to sit at the big house table to tell our stories, only to be told that, despite all the box-office evidence to the contrary, not that many people want to hear our stories.

In the meantime, to borrow from Shaft: “Who’s the cat that won’t cop out when there’s danger all about?” Black Panther. Right on. 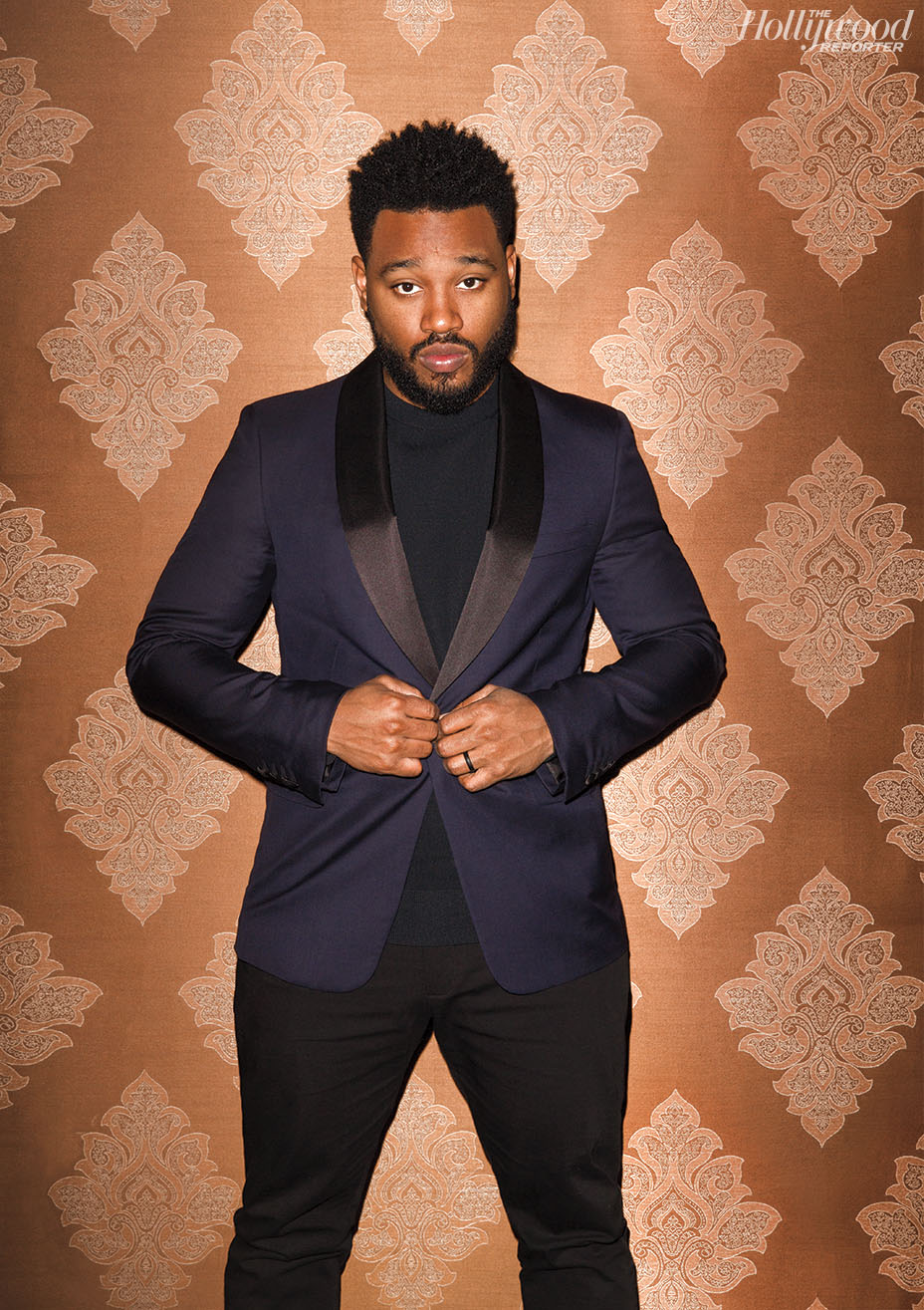