For her directorial debut, Greta Gerwig decided to write something simple and personal: an intimate, semiautobiographical slice of life centering on the day-to-day travails of a bored 17-year-old Catholic school girl growing up in suburban Sacramento, California, at the turn of the 21st century.

Her first draft of what was then called Mothers and Daughters ran 350 pages. “I tend to overwrite,” Gerwig understates. “I’m not one of those people who say, ‘I wrote a script in two weeks!’ ”

For the better part of the past decade, Gerwig has been the actress muse to a generation of hipster filmmakers — the naturalistic young auteurs who’ve led the mumblecore movement — starring in Noah Baumbach movies (Frances Ha, Greenberg, Mistress America), Joe Swanberg films (LOL, Nights and Weekends, Hannah Takes the Stairs) and a slew of other indies (Mike Mills’ 20th Century Women, Whit Stillman’s Damsels in Distress). If it was made during the Obama era, had a low budget, was shot in Brooklyn and focused on a bunch of hard-to-hear 20-somethings involved in a barely detectable plotline, chances are Gerwig had a part in it. Says Gerwig, “I was getting my 10,000 hours or whatever Malcolm Gladwell says that you need.” But now, at 34, the actress is attempting that most challenging of cinematic transformations: becoming her own muse. 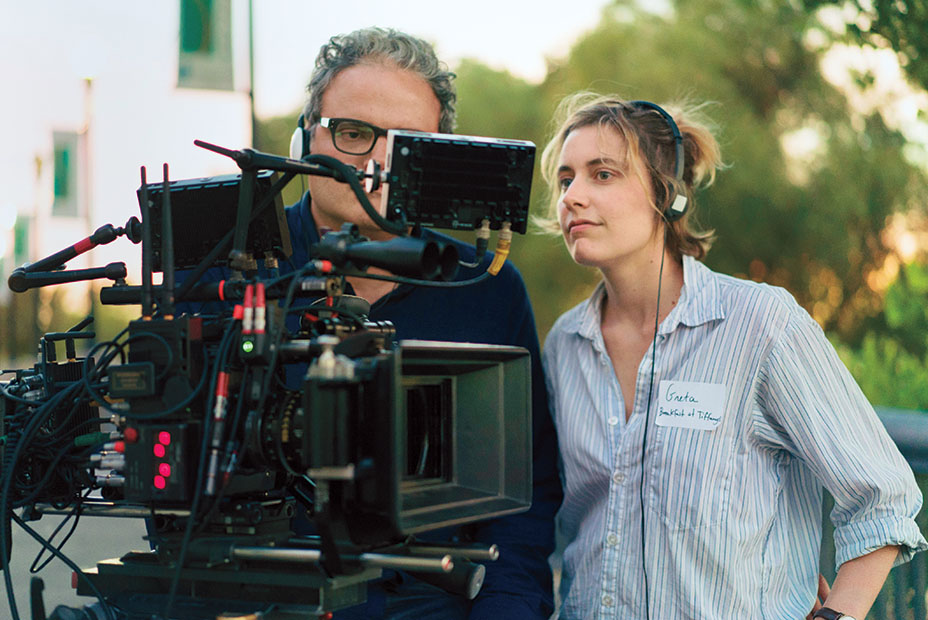 “I’ve always wanted to direct,” she says. “And when I finished that first draft of Mothers and Daughters, I knew this was going to be the one I did it on.” That bloated first draft obviously required some editing. It took Gerwig a couple of years to trim 200 pages — and change the title to Lady Bird— but once it was ready, she gave the script to her manager, Evelyn O’Neill, at Management 360. The writer asked O’Neill if she would be willing to produce it, despite the fact O’Neill had no prior producing experience. “I thought, ‘Well, I’ve never directed one. You’ve never produced one. But together, I think we could do this.'”

Together, they started meeting with producers and financiers, during which time Gerwig discovered an interesting phenomena. “If these men — because it’s mostly men that have the money to make movies — had daughters or were raised with sisters, they totally understood the movie. They were like: ‘Yup, that’s my wife and my daughter.’ Or ‘That’s my sister and my mom.’ If they [didn’t], they would say, ‘Oh, do women really fight like that? Weird.'”

Gerwig also had plenty of influential friends lining up to read Lady Bird, including Pulitzer Prize-winning playwright Annie Baker, who loved the script so much she sang its praises to her producer pal Scott Rudin. Rudin asked Gerwig to messenger a copy, and within 24 hours he committed to the project. “It ended up being fairly simple,” says Gerwig, although she didn’t truly believe it was happening until the cameras started rolling. “I’ve worked on so many indies, I know that financing is always falling through,” she says.

Casting the film’s lead — Christine “Lady Bird” McPherson, a snarky high school senior traversing the treacherous world of after-school theater, college applications, difficult dating choices (Timothee Chalamet’s wannabe anarchist versus Lucas Hedges’ musical theater nerd) and an overbearing but loving mom (Laurie Metcalf) — turned out to be pretty straightforward as well. In one of Gerwig’s first meetings with Rudin and his producing partner Eli Bush, they brought up Saoirse Ronan, an Irish actress starring in their Broadway revival of The Crucible. Gerwig and Ronan met at the 2015 Toronto Film Festival, where both actresses had films premiering (Gerwig was the star of Maggie’s Plan and Ronan of Brooklyn) and huddled in a hotel room with a copy of the script. “I knew on page two that she was Lady Bird,” says Gerwig, although she had Ronan audition anyway. “I selfishly wanted to hear the entire thing read out loud.” 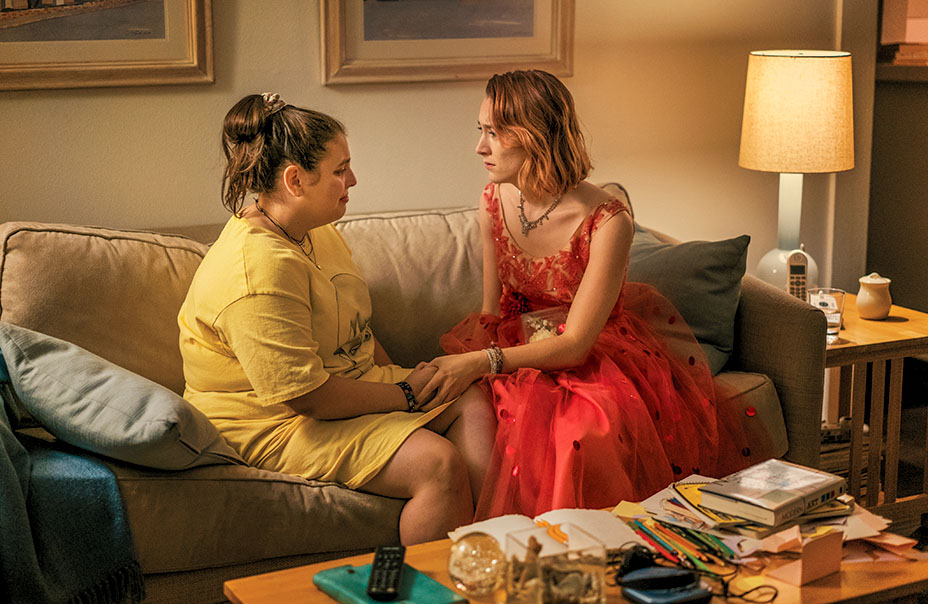 Gerwig populated her onscreen Sacramento with almost strictly New York stage actors. With assistance from Rudin’s wide reach in the theater world, the director built out her supporting roster with veterans like Metcalf, Tracy Letts, Stephen McKinley Henderson and Lois Smith, as well as young talents like Chalamet and Hedges.

Gerwig’s directing friends — and she has plenty, including Spike Jonze and Wes Anderson — had lots of suggestions to help her handle her first big stint behind the camera. But the advice that stuck came secondhand from the late Mike Nichols, who had once told Maggie’s Plan director Rebecca Miller, “Don’t try to be ahead of where you are. You only get to not know what you’re doing once. You’ll never get to be that brave again.”

But Gerwig knew more than she realized. If nothing else, her years acting in (and sometimes co-producing and co-writing) low-budget indies had taught her the value of preparedness, and she mapped out preproduction with near-obsessive focus. She worked closely with cinematographer Sam Levy, building a 110-page shot list that included blocking for every scene. To find just the right lighting mood, the director and DP plastered a wall in their L.A. production office with photocopied images, everything from old pictures of Sacramento to Dave Matthews Band album covers. Gazing at the wall one day with Levy, Gerwig had a eureka moment. She turned to the cinematographer and said, “I want it to look like a memory.” 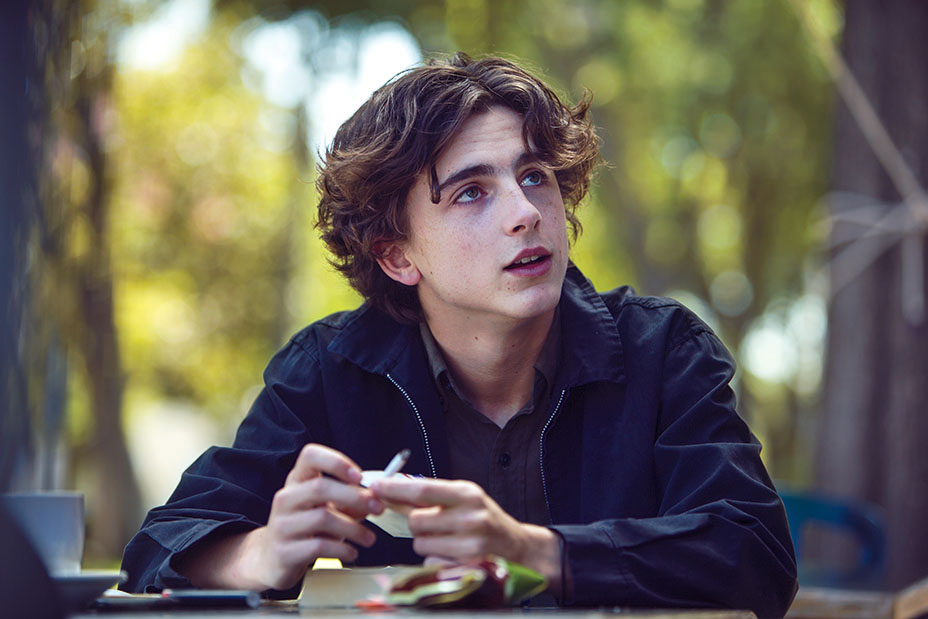 Thanks to an overused color printer in their office, Levy found that look. “I started to take the copies off the wall and re-Xerox them over and over,” he recalls. The process produced increasingly granular images with muted colors, an effect Levy replicated onscreen by fitting old Panavision lenses on his digital Alexa Mini camera.

For other members of the production team, though, re-creating 2002, a cultural time frame between Nirvana and Paris Hilton, turned out to be more challenging. Costume designer April Napier discovered that while L.A. costume houses had clothes from the ’50s to the ’90s, they had nothing from the early 2000s. “It was the age of throwaway fashion,” she points out. Instead, she turned to web of thrift stores to build out her wardrobe of boot-cut jeans, puka shells, Von Dutch and velour sweatsuits. “There’s this one striped sweater, scarf, hat combo from the Gap that [Saoirse] wears for a single moment, which I have a complete Proustian reaction to,” says Gerwig. Production designer Chris Jones, meanwhile, dug up flip phones and Dell desktops.

Lady Bird is as much a movie about time and place as it is about anything, and Gerwig saw her native Sacramento as a supporting character. “People associate California with San Francisco, the city by the Bay, and the glitz and glamour of Los Angeles,” she says. “They don’t think about the Central Valley. But my grand­father dug an oil field along the I-5.”

Unfortunately, the budget (nearly $10 million in financing, thanks to Barry Diller’s IAC) wasn’t big enough to shoot on location, so Gerwig used L.A.’s outskirts as stand-ins, filming at a single-story home in Van Nuys and Catholic school in Pasadena. The note that Gerwig gave Jones, who was charged with dressing the school: “Add more crucifixes. Everywhere.” The production spent just one week of eight in Sacramento, with Levy shooting exteriors and landmarks, like the capitol building and the Tower Bridge, the latter of which acted as a Northern California homage to Woody Allen’s Manhattan. “I enjoy working in Sacramento more than Paris,” insists the cinematographer. 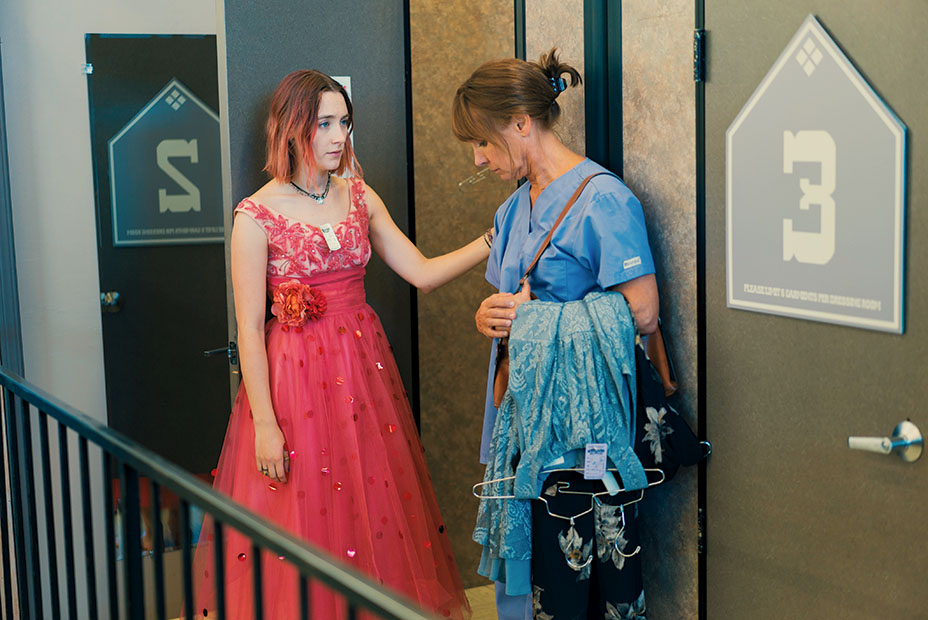 Every bit as important as the settings was the soundtrack, and Gerwig toiled to assemble just the right playlist of early 2000s music. “No one in Sacramento knew who The Kinks were,” she says of her hometown’s lack of a counterculture. She leaned on Counting Crows, early career Justin Timberlake and Dave Matthews, whose hit “Crash Into Me” plays throughout the film. Gerwig also constructed an on-set playlist of ’90s and ’00s bangers, including selections from Blues Traveler and Alanis Morissette, that she would play in between shot setups.

The production, which began in August 2016, proceeded more or less on schedule. In fact, Gerwig turned out to be a machine when it came to keeping on track, leaving little room for time-wasting improvisation. “Shooting felt like a highlight reel,” says Hedges of filming, which included the cast and crew coming together to put on a homecoming dance, a hell-themed prom and a fully staged production of Merrily We Roll Along.

“We were like her kids,” says Ronan of Gerwig’s directing style. “What makes a great director is also what makes a great parent — knowing how to discipline their children but also [letting them] know that they are completely loved.” 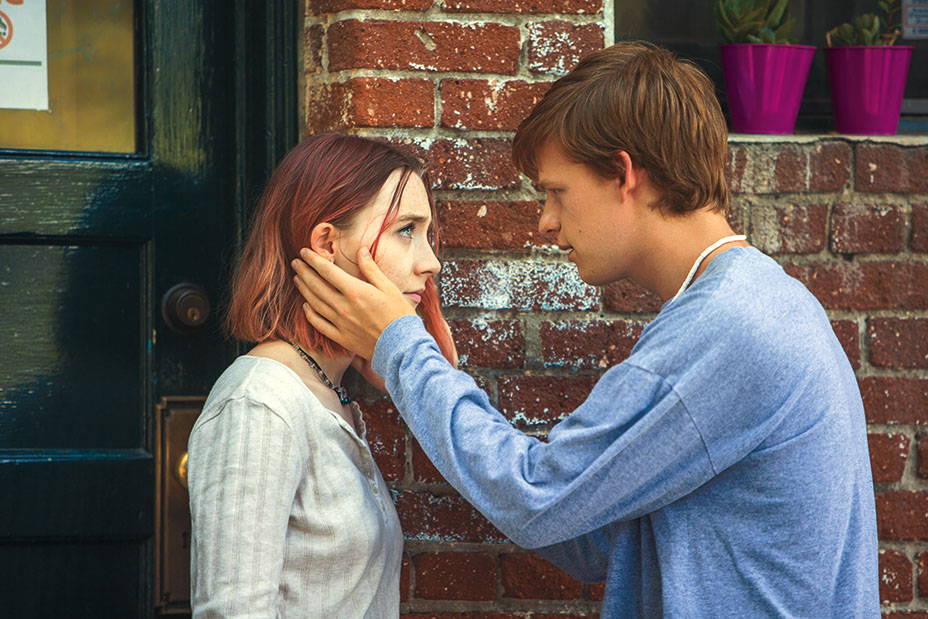 Throughout the stress of scripting, filming and editing, Gerwig always harkened back to what she saw as the film’s core: the mother-daughter relationship after which the film was originally named. “The central love story to me is between Lady Bird and her mother, even in scenes where her mother is not present,” she explains.

The result speaks for itself: Lady Bird got a standing ovation at its Telluride debut in September, putting the film in the awards season fast lane. Its distributor, A24, released it Nov. 3, the same mid-fall timing it picked for 2017’s Oscar best picture Moonlight. “They are invested in films by singular voices,” says Bush about the New York-based distributor.

In its first weekend, the indie, which currently sits at a 100 percent on Rotten Tomatoes, pulled in $375,612 in four theaters, the best per-theater box office of 2017. Ronan, though, is thinking about bigger goals than box-office return and Oscar gold. “When people ask what I want audiences to take away from the movie,” she says, “I tell them, ‘I want them to call their moms.’ “ 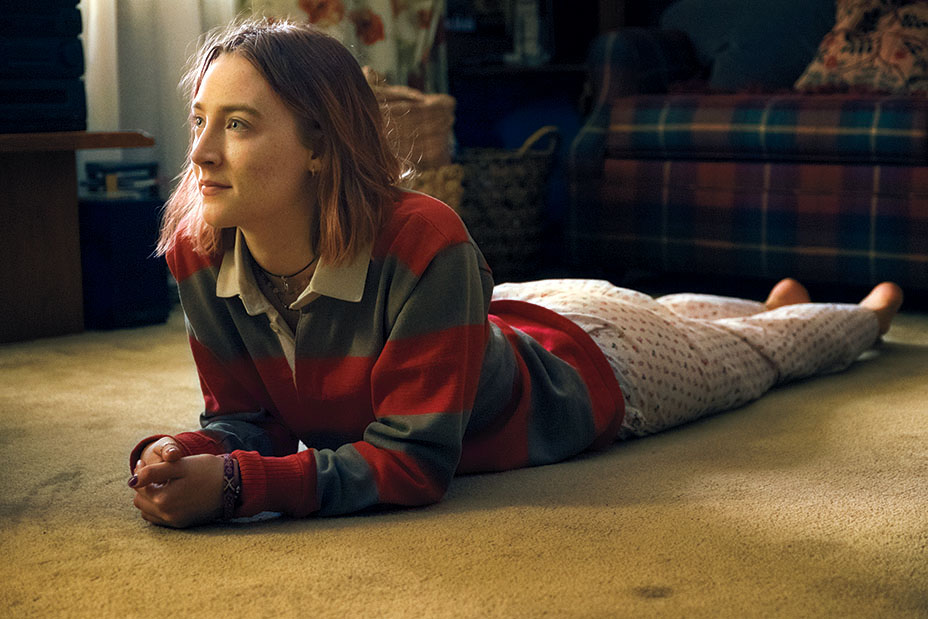