Every great tennis player has a signature gesture or move before serving. A head roll or a shoulder shrug or a racket twirl or some other idiosyncratic tick. For Billie Jean King, it was bouncing the ball twice before serving. Never less, never more.

Emma Stone became an expert at it. In late winter and spring of 2016, she spent scads of time with King on a tennis court studying how the 74-year-old Grand Slam legend snapped the ball on the asphalt two times before launching it across the net. Stone wanted to get it right. “It was my first time portraying a real person,” says the 29-year-old recipient of 2017’s best actress Oscar. “Every scene was so immensely important.”

Battle of the Sexes, Fox Searchlight’s dramedy about the immensely important 1973 tennis match between King and world-famous chauvinist Bobby Riggs — a pivotal moment not just for tennis and feminism but also for television, with more than 90 million viewers tuning in to ABC’s live broadcast in 1973 — could end up making a bit of history of its own. If Stone ends up getting nominated for another Oscar — and she’s already picked up a Golden Globe nom, as has co-star Steve Carell, who plays Riggs — it’ll be the first time that an actress has been nominated for playing a real-life athlete. Or possibly the second, if fellow Golden Globe candidate Margot Robbie also gets an Oscar nom for playing Tonya Harding in I, Tonya. 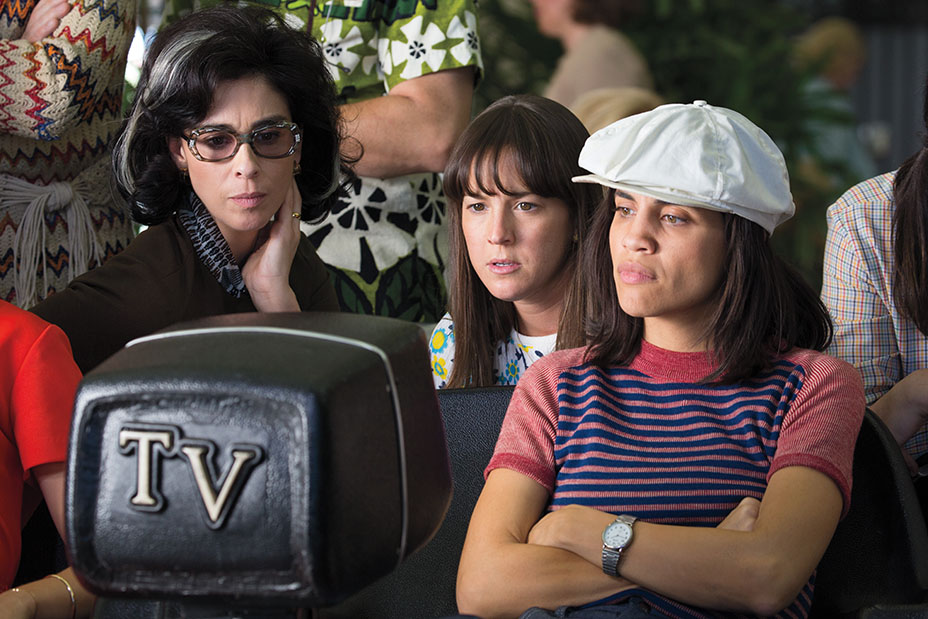 The point is, unlike male actors, who get nominated all the time for playing real-life jocks — from Gary Cooper in The Pride of the Yankees to Mark Ruffalo in Foxcatcher, this is the first year there’s been a decent chance it could happen for a female star. Maybe even two.

Originally, Danny Boyle was going to direct Battle of the Sexes. The idea was the brainchild of Boyle’s longtime producing partner, Christian Colson (he came up with it while watching the 2012 London Olympics). “The more we looked into [a Billie Jean King movie], the more we felt like it was delicious material,” says Colson. Boyle and Colson took the pitch to Fox Searchlight, where Boyle has his directing deal, and the studio thought it was delicious, too, agreeing to a budget of $24 million. Next stop was screenwriter Simon Beaufoy, who’d worked with Boyle and Colson on Slumdog Millionaire and 127 Hours. After Beaufoy signed on, all three met with Stone, who in 2013 was in London shooting Woody Allen’s Magic in the Moonlight. Then they flew to New York City to talk with the woman whose life they were all about to put up on the screen.

They didn’t need King’s life rights to make the movie — she’s a public figure — but wanted her input. And King wanted to give it. Beaufoy remembers one 10-hour session in King’s New York apartment when she pored over every word of his script, which deals as much with her tennis career as it does with her marriage and the lesbian love affair with Marilyn Barnett — a hairdresser played in the film by Andrea Riseborough — that broke it up. “She went through it page by page,” Beaufoy says. “She was correcting details and saying, ‘We need to do this, we have to do that.’ But I would tell her that there’s a dramatic reason we need to show this, and she’d say, ‘OK, I get it.’ ” Not surprisingly, King was particularly concerned about the sex scene between her and Barnett. “She kept asking how far we were going to go,” says Beaufoy, who assured her that it would be tame enough for a PG-13 rating. “We told her that people just needed to know it was a sexual relationship. She told us that kissing would be great.”

But then, in 2015, Boyle departed the project. He decided to leave Battle of the Sexes to make T2 Trainspotting, the long-gestating sequel to his 1996 punk masterpiece (the follow-up ended up tanking at the box office in the U.S., grossing only $2.4 million). At some studios, that would have been game, set, match, but Fox Searchlight went ahead with the movie anyway, replacing Boyle with Jonathan Dayton and Valerie Faris, the husband-and-wife team behind the studio’s 2006 sensation Little Miss Sunshine. The couple had made only one feature since Sunshine, 2012’s Ruby Sparks, which fizzled at the box office ($9.1 million), but Searchlight was eager to work with them again, anyway. And they were eager to work with Fox Searchlight. They gave an immediate yes.

The first thing Dayton and Faris did — after meeting King — was send the script to their old Sunshine star Carell, who remembered watching Riggs on TV as a kid, though he never took the player’s wild displays of misogyny too seriously (“If I’m going to be a chauvinist pig, I want to be the number one pig,” was one of Riggs’ signature lines). “I was 11 years old when the match took place,” Carell says. “Even at that time, I knew Bobby was kidding. You could see if someone’s heart was connected to what they were saying, and it wasn’t. It was for show.”

Luckily for him, Carell was already a decent tennis player (he has a court at his L.A. home), so he didn’t require much training to play a semi-out-of-shape 55-year-old retired pro. Stone, however, was a different story. All that hoofing on the set of La La Land — which she had wrapped just before starting prep on Battle of the Sexes — had left her in decent shape. But she was still far too lithe to play a professional athlete. Dayton and Faris put her on a physical fitness program, having her lift weights, do cardio and drink protein powder shakes filled with almond milk and coconut oil. Within a couple of months, she’d bulked up with 15 pounds of muscle. Meanwhile, Stone had been working with a dialect coach to master the cadence of King’s speech (“I would keep Billie Jean’s voice in my ears on headphones throughout the day,” she says).

All that was left was to teach Stone how to play tennis, a sport the athletics-averse actress had never bothered to learn. She got a couple of lessons from King — they started by simply tossing a tennis ball back and forth — but the more intensive training came from Vince Spadea, a former ATP Tour pro who once beat Roger Federer (he also served as Carell’s body double on the film).

Principal photography began in April 2016, with the 35-day shoot roaming all over the Los Angeles area — sets on the Fox lot, a hotel in Long Beach, a house that once belonged to singer Connie Francis. The old Los Angeles Sports Arena in Exposition Park (which was torn down in September) was outfitted to look like the Houston Astrodome, where the match between King and Riggs took place. But one of the biggest unanticipated challenges for production designer Judy Becker was finding green tennis courts. In 1973, tennis courts weren’t painted the blue they are today.

“The governing premise was that we were going to make a movie that looked like it was made in 1973,” says Dayton. So along with the green tennis courts, long sideburns and vintage Buick LeSabres, Battle of the Sexes further exudes the era by draping the screen in gauzy retro lighting, courtesy of cinematographer Linus Sandgren, who had just filmed Stone in La La Land (and, like Stone, would soon be winning an Oscar for it). 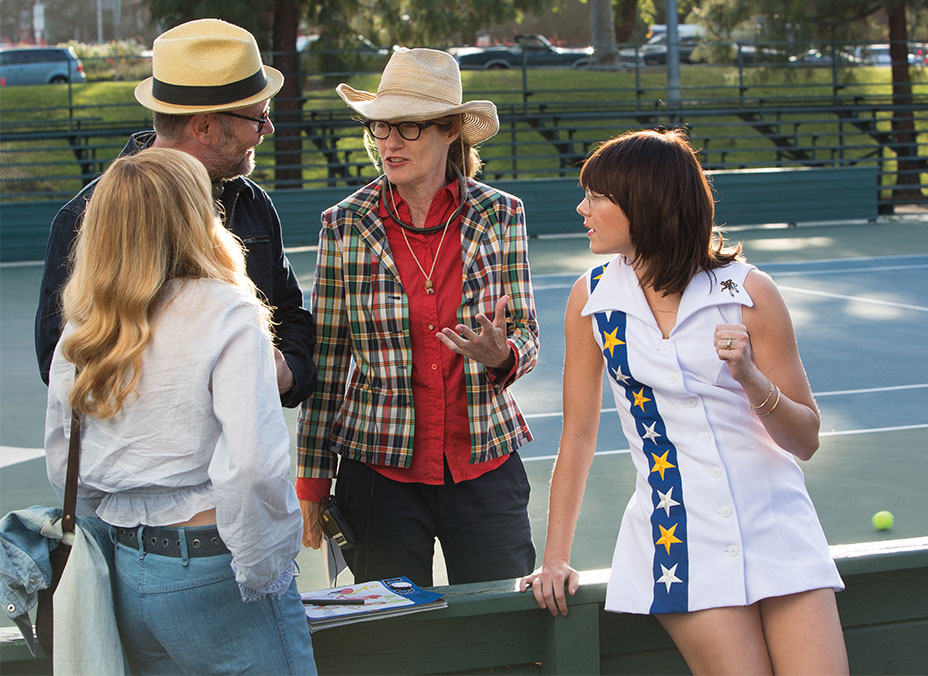 While they were shooting the movie, the presidential election was in full swing, and back then it looked very much like Hillary Clinton would be the next occupant of the Oval Office — the perfect moment, Beaufoy assumed, for a movie about female empowerment and the triumph of feminism. “We were very excited,” he says. “We thought we’d have the premiere at the White House, since Hillary Clinton is a friend of Billie Jean’s. We had no idea what was really going to happen.”

In a way, what did happen made Battle of the Sexes all the more timely (if not necessarily successful at the box office; it’s grossed only $12.8 million since its September release, although it could get a boost from the Jan. 7 Globe ceremony). Stone certainly sees a topical poignancy in the movie’s plotline. “The conversations that are going on in our country and around the world are eerily relevant to the microcosm of what’s happening in the film,” she says. “It’s upsetting in terms of how far we have to go, but it’s still a really inspiring story.”

Beaufoy agrees, though he sounds like he’s still missing that White House premiere. Says the man who wrote the script, “The film is becoming more and more horrifyingly relevant as time goes on.”