On the first day of production on The Farewell, a very special visitor rolled onto the set in a motorized wheelchair. It was director Lulu Wang’s nai nai — Mandarin for paternal grandmother — who spent that June day in 2018 watching Wang film in an apartment complex in the northeast Chinese city of Changchun. She had no idea that the movie being made in front of her was the story of her own impending death.

It’s a complicated and twisty tale, but as the tagline of the film — “based on an actual lie” — clearly suggests, The Farewell is in no small part autobiographical. Back in 2013, when Wang’s family learned that their beloved matriarch had been diagnosed with terminal cancer, they decided to keep the truth from her and instead concocted an elaborate deception in order to say their goodbyes: They staged a fake wedding in Changchun, the grandmother’s hometown, where the entire clan could gather around her for one last time. 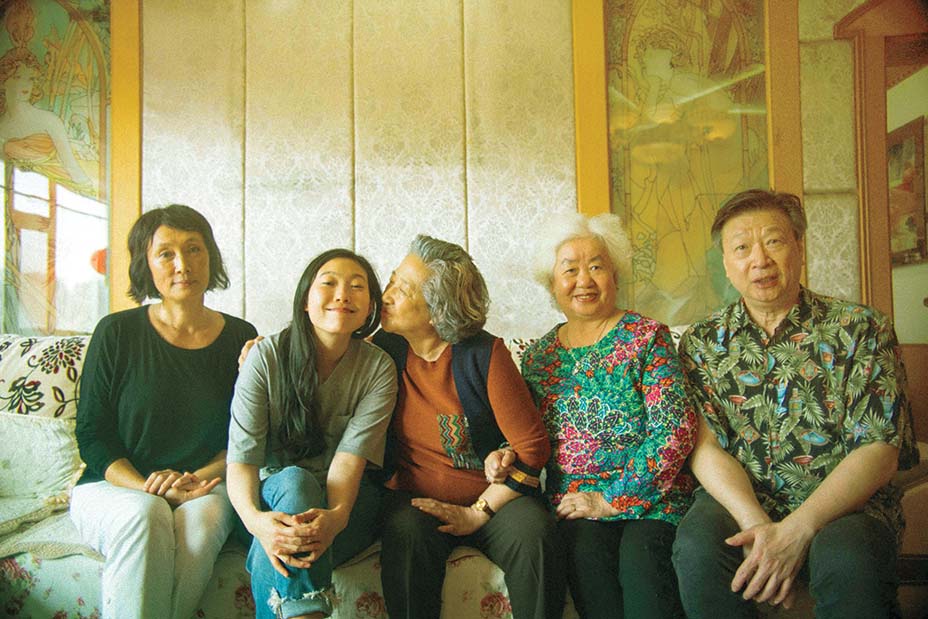 But that familial lie ended up traveling much farther than anyone expected, taking some mind-bending turns along the way. Miraculously, Wang’s grandmother managed to beat back cancer ­— without ever knowing she had it — longer than anyone anticipated. Long enough for her granddaughter to write a screenplay about the deception and shoot the film over five weeks in China, where her still very much alive ­(and still very much in the dark) grandmother, then in her mid-80s, would visit on the first day of production.

“It was pretty meta,” says Wang with a deep exhale. 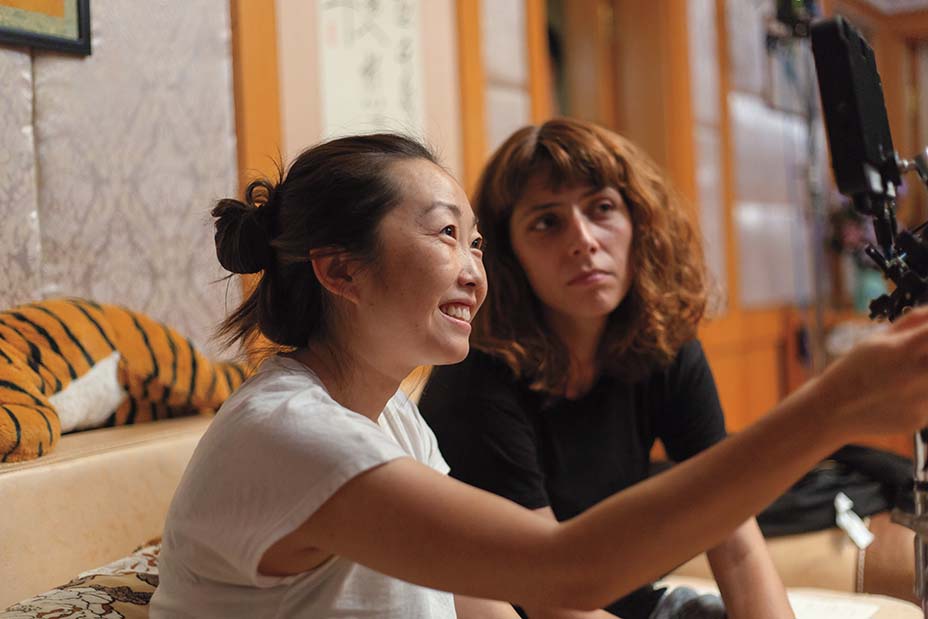 Wang first revealed the lie about her grandmother on public radio. The 36-year-old director — who came to the U.S. as a child in 1990; she grew up in Miami but now lives in Santa Monica — had mentioned the story to Neil Drumming, a producer of This American Life she’d met while traveling the festival circuit for her first feature, a 2014 rom-com called Posthumous. Drumming loved the tale and broadcast it in May 2016 in a segment titled “In Defense of Ignorance.”

As it happened, one of the listeners was Chris Weitz, the Oscar nominated writer of such titles as About a Boy and Star Wars: Rogue One. “It was a rare story in which nobody was wrong,” says Weitz. “It really didn’t have any cliche in it, either.” Weitz messaged Wang on Twitter and set up a phone call, and before he’d hung up had signed himself and his Depth of Field banner as producers of a proposed feature based on the story. “It was the ideal way to start producing a movie,” Weitz says. “You just hear something that sounds great and is not presented as a film idea.”

Weitz wasn’t the only one who’d heard the radio segment — he was just the first to have contacted Wang. Within 48 hours of the airing, she was bombarded with calls and emails from agents and studios. “I had no idea how to choose,” she says. But she knew what she didn’t want. “Ethnic American films are almost like a genre in and of itself. As soon as you say, ‘This is about my family. There is a wedding. It’s Asian,’ it is immediately put into this box of a broad comedy like My Big Fat Greek Wedding.” When heading in to pitch meetings with potential producers or financiers, she came armed with a list of non-negotiables. “‘Let me just tell you straight up that it is going to be Chinese-language, it’s going to be cast entirely Asian and Asian American, and she will not have a white boyfriend,'” she recounts of her conversations with executives. Ultimately, she found a production team and financiers in the New York-based Big?Beach?Films. 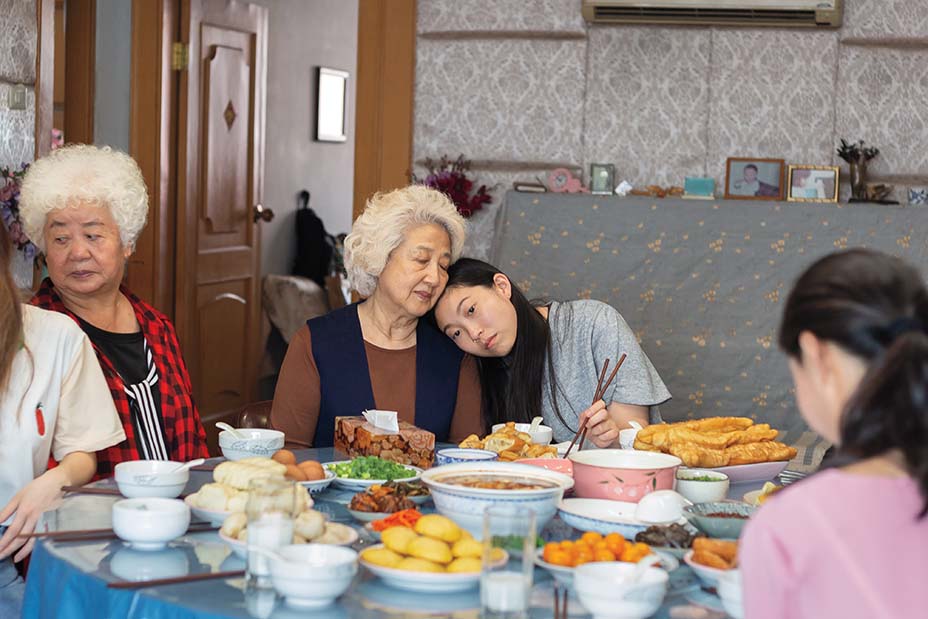 Although autobiographical, Wang never saw The Farewell as a straight-up biopic, which gave her some wiggle room when casting her cinematic alter ego (renamed Billi in the film). But even if Wang didn’t want a doppelganger, there were restrictive parameters during the search for a lead actress. “We needed her to be seen as American but have the ability to speak some Chinese,” Wang explains. Fortunately, there was one up-and-coming former YouTube star who fit the bill. Nora Lum — also known as Awkwafina — had just finished filming Ocean’s 8, was about to start shooting Crazy Rich Asians and was plotting the next steps of her film career when her manager sent her the script for The Farewell. She met Wang for coffee in Williamsburg, Brooklyn, and pitched herself for the role by talking about her own life being raised by a Chinese grandmother and her feelings of being caught between her Asian heritage and American upbringing. “It was incredible to just be in the presence of someone who was about to write and direct her own story,” says the star.

With her lead set, Wang relocated to China, where she would have slightly less than two months to solidify crew, equipment and locations — and cast the rest of her movie. A local casting director was used to find Chinese talent to play Wang’s onscreen family, and that wasn’t always easy. Says producer Daniele Tate Melia, “To convince Chinese actors in China that they should be in an American indie film and say, ‘It might go to Sundance and break out!’ — that is not a big draw there.” 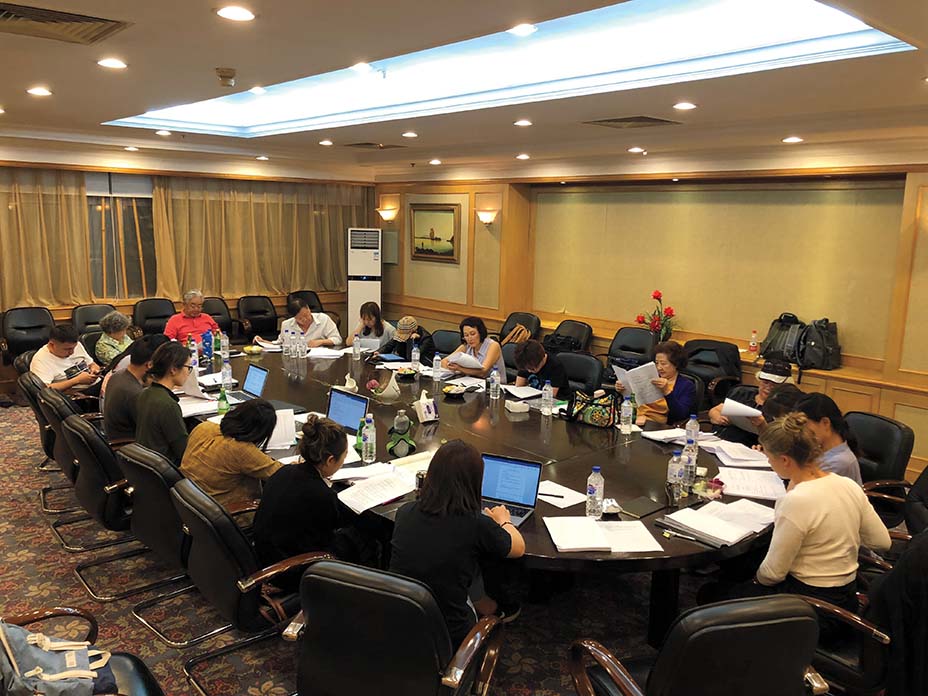 Veteran performer Zhao Shuzhen received a call from Wang about playing her grandmother. “She told me it was an independent film, so the treatment and compensation would not be that high,” says Zhao via translator. (The movie’s production budget came in at slightly less than $5?million.) “But I was moved by her passion and dedication to her story.”

In another meta moment, Zhao — a star of the Chinese film and television world for six decades — actually met with Wang’s real grandmother, though there’s some dispute about whose idea that was. “Because Lulu thought it was important for me to faithfully portray her grandmother, she made a point to arrange a meeting for me to meet her,” says Zhao. Wang remembers it differently. “She says I set up the meeting but she really set up the meeting. Zhao said she wanted to meet my grandmother,” she says. “My great aunt was going, ‘Great! Let’s meet her!’ And I was going, ‘Are you sure?'” Along with Nai Nai’s sister Hong Lu — who plays herself in the movie — Zhao went to Nai Nai’s home to meet her. “She knew [Zhao] was going to play some version of her,” explains Wang. “She just didn’t know she was the central character.” 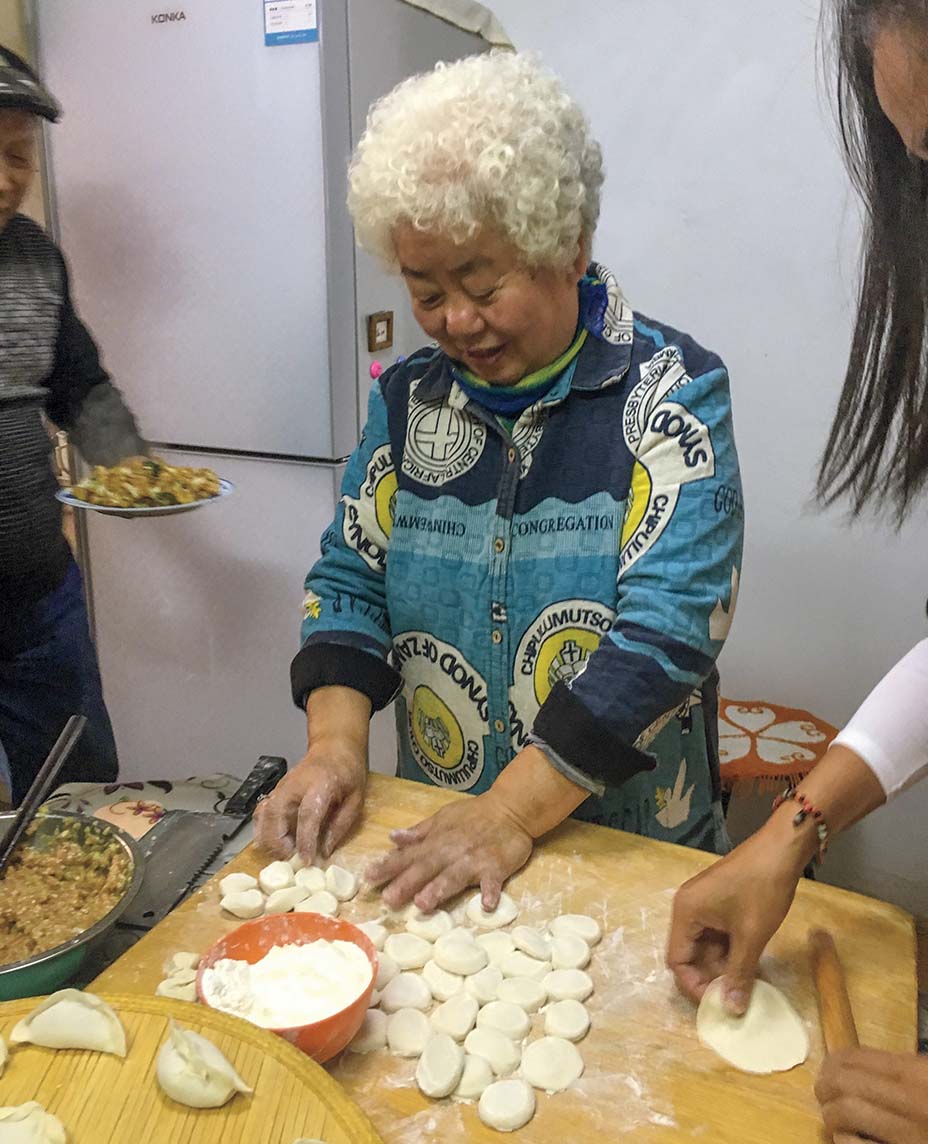 Having cut her teeth on music videos and indie films, Wang was accustomed to the hardscrabble work ethic that goes along with limited budgets and long workdays. Still, she was unsure of what to expect from indie production in China. “There are no unions, so there is not a lot of ‘That’s not my department,’ or ‘That is not my job,'” she says. The Chinese crew, which had to be convinced to shoot five-day weeks as opposed to their usual seven, would call Wang “director” as opposed to her name and were jarringly efficient. If a tree was ruining the framing of the shot, they would just chop it down. If a sedan was blocking the path needed for the dolly, crewmembers would pick it up and move it. “The speed at which things happen is something I had to adjust to,” says Wang. 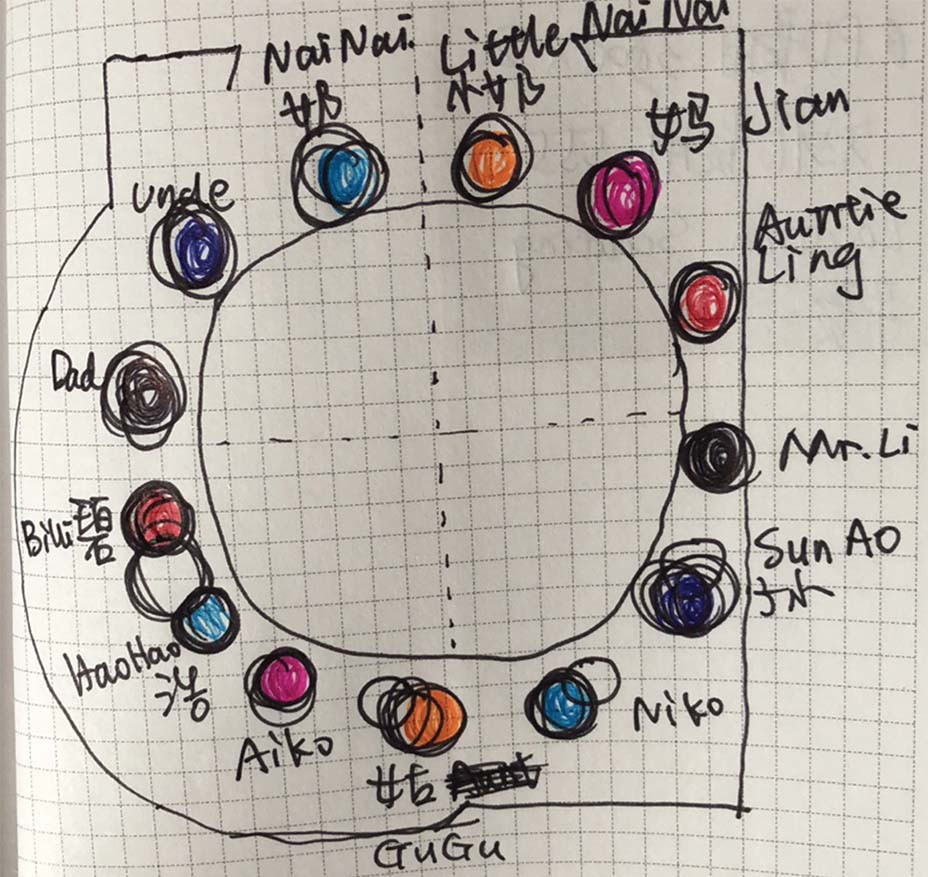 The international crew was predominantly Mandarin-speaking, while behind-the-camera talent included a Korean production designer, American producers and a Spanish cinematographer. Despite the language barrier, after filming or on nights off the Farewell team would go out for karaoke or watch whatever movies were on TV. “They were always playing True Lies, for some reason. It was a True Lies blitz!” recalls Awkwafina. “A lot of Jamie Lee Curtis.”

The entire crew is in agreement that the climactic wedding banquet scene was the trickiest to pull off. Production designer Yong Ok Lee had to build out a false ceiling of draped fabrics to hide lighting equipment, but the heat emitted from the low-hanging bulbs baked the banquet meal, which consisted of hundreds of pounds of seafood. “You never think about how hot those lights are and how smelly crab can get,” laughs producer Melia. The production shot their extras eating the large quantities of crab, while the empty shells continued to be used as props for the weeklong shoot.

The banquet shoot also had a real-life twist ending of its own. “It was our final day of filming and, suddenly, 300 kindergarteners showed up on set,” remembers producer Anita Gou. The space was being turned around that afternoon for a Kindergarten graduation. “There were all of these children in glittery costumes doing synchronized dances, and parents with their phones out.”

Another welcome but unexpected result of filming in China: hoverboards. When picking up camera equipment, Wang saw that the rental house also rented Segway hoverboards — the internet’s favorite hands-free mode of transport, which came to prominence in the late aughts. “They would use it as a low-fi dolly,” explains Wang, whose zeal for the hoverboard prompted the rental house to include the scooter with her camera and lighting hardware. Wang directed a large portion of her film from atop it, traversing between video village and set to talk to the actors. “It’s definitely not safe and definitely would not be allowed in America,” laughs Wang. “But it was really cool.”

Wang’s newfound love of Hoverboards carried over into postproduction, where she used one to commute to the editing bay in New York City. For co-editor Matt Friedman, who worked with Wang on Posthumous, The Farewell’s majority-Mandarin dialogue created a unique challenge. “In Mandarin, the sentence structure is completely different from English,” he explains, “so the emotional content of the line in Mandarin might fall at the end of the dialogue, while in the English translation, it may be in the beginning of the same line.” Wang would sit with her editors to ensure that the film’s meaning and moments, both spoken and unspoken, were not, literally, lost in translation.

The dream for Wang was always to premiere The Farewell at Sundance. “It is the quintessential American film festival,” she says, “and I saw this as an American film — no different than Noah Baumbach’s Squid and the Whale.” In a year of big market acquisitions, The Farewell made headlines by igniting a bidding war at Sundance that had Fox Searchlight, Amazon and Netflix all competing to pick up the film. In the end, A24 purchased the North American rights for around $7?million, even though the filmmakers have said they turned down an eight-figure deal from a streamer. “We did not anticipate being in that situation,” says Melia of the interest. “Everyone would be so excited for a theatrical release, but we were thinking about finding a way for us to make our money back and also a way for an audience to see the?movie.”

Since The Farewell’s July?12 release, it has grossed $17?million domestically and has picked up two Golden Globe nominations as well as a Gotham Award for Awkwafina. While it is unclear if Chinese censors have made any cuts to the film (the movie’s run time is listed as the same as its American release), The Farewell is scheduled to hit Chinese multiplexes Jan.?10 via Maoyan Entertainment. One person who is planning on being in attendance: Nai Nai, who presumably will finally learn the secret that her family had worked so hard for so long to keep from her. “Like the lie in real life, it is not my responsibility to tell her or to hide it,” says Wang. “I just have to follow the family.”

A version of this story first appeared in the Jan. 7 issue of The Hollywood Reporter magazine. To receive the magazine, click here to subscribe.