On a warm summer day in 2018, Ford v Ferrari director James Mangold and stars Christian Bale and Matt Damon gathered around a monitor in the Highland Park area of Los Angeles to watch a fight — the awkward and hilarious rumble they had just enacted in front of the cameras. (Spoiler alert: A loaf of Wonder Bread is used as a weapon.)

“Christian played Batman for a decade, and I played Jason Bourne for about the same amount of time,” says Damon, 49. “We had to take fights in those films so seriously. This was exactly the opposite. It was completely silly and goofy. They basically stop fighting because they run out of breath.” 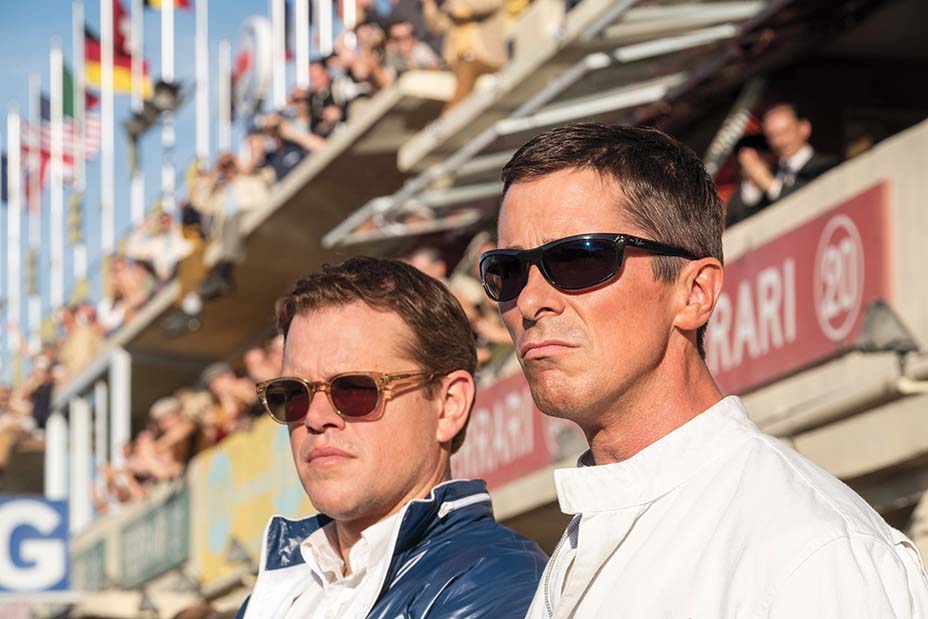 With the project in various stages of development for more than a decade, Mangold tweaked the story to focus on the relationship between former Le Mans winner Carroll Shelby (played by Damon) and Ken Miles, an eccentric British race car driver (played by the 45-year-old Bale). In the movie, Shelby recruits Miles to help Ford (Tracy Letts) run Ferrari (Remo Girone) off the road and claim the title for a U.S. automaker once and for all.

Coming off his last film, 2017’s effects-heavy Logan, Mangold was determined to bring a far more practical approach to Ferrari, forgoing CGI shortcuts in favor of full-scale sets and real stunt driving. (Of course, some movie magic came into play: The spectator stands are mostly computer-generated, and locations in California and Georgia stood in for Le Mans, France, where the actual race took place.)

The $97 million film, which opens Nov. 15, was one of the last movies made entirely by 20th Century Fox before the studio was absorbed by Disney in March. It’s the sort of adult-aimed, mid-budgeted period piece that many (like Martin Scorsese in his recent New York Times op-ed) worry is going the way of the dinosaur. “Obviously, movies like this are scary to studios,” Mangold says. Its material has no inherent IP or audience base other than perhaps the auto-racing world. Bale thinks the chaos and uncertainty that surrounded the Fox acquisition was probably fortuitous. “The unknown of what was about to happen and who would have a job invoked an attitude of ‘Let’s go out with a bang!’ ” he says. “That’s what finally got this movie made. It had been around for a while.” 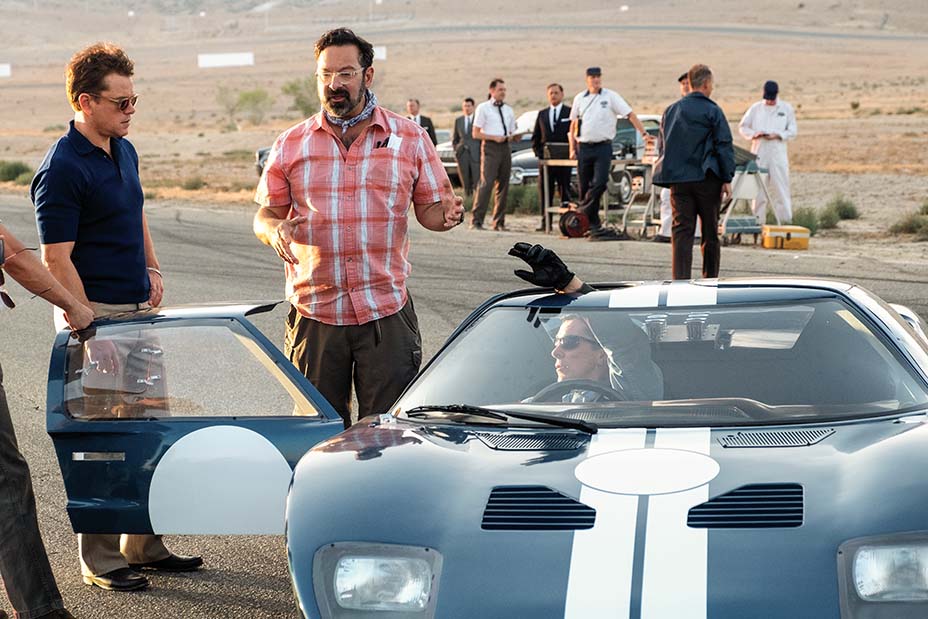 Jason Keller, who grew up watching the Indianapolis 500, wrote the first draft of the script back in 2009. Along the way, it attracted and lost two directors (Michael Mann and Joseph Kosinski) and two A-list stars (Tom Cruise and Brad Pitt). Originally, the story focused equally on the Ford and Ferrari teams, an unwieldy and expensive proposition. (The current iteration centers on Ford.) In 2011, Mann asked screenwriting brothers Jez and John-Henry Butterworth to take a pass. Meanwhile, with each passing year, the appetite for racing movies seemed to diminish. (Hollywood’s last major attempt came in 2013 with Ron Howard’s Rush. It crashed at the box office.) There was also chatter about a rival Ferrari project at another studio. So Ford v Ferrari made an extended pit stop.

Mangold’s moment to climb into the driver’s seat came in 2017. Fresh off the box office success of Logan, he was riding high at the studio along with its longtime president of production, Emma Watts, with whom he’d successfully collaborated since the 2005 Oscar-winning Walk the Line.

His pitch was eager but honest, and included the admission that he wasn’t a “car guy” but wanted to explore a world he didn’t know. Ultimately, he was most captivated by the dynamic between Miles and Shelby. “You have an aging, great driver with a smart mouth — Miles — who can’t get along with authority,” Mangold explains. “And then you have Shelby, who is a great race car driver who can’t drive anymore because of a heart condition, but who is very good at politics. I found their yin-yang relationship interesting.” 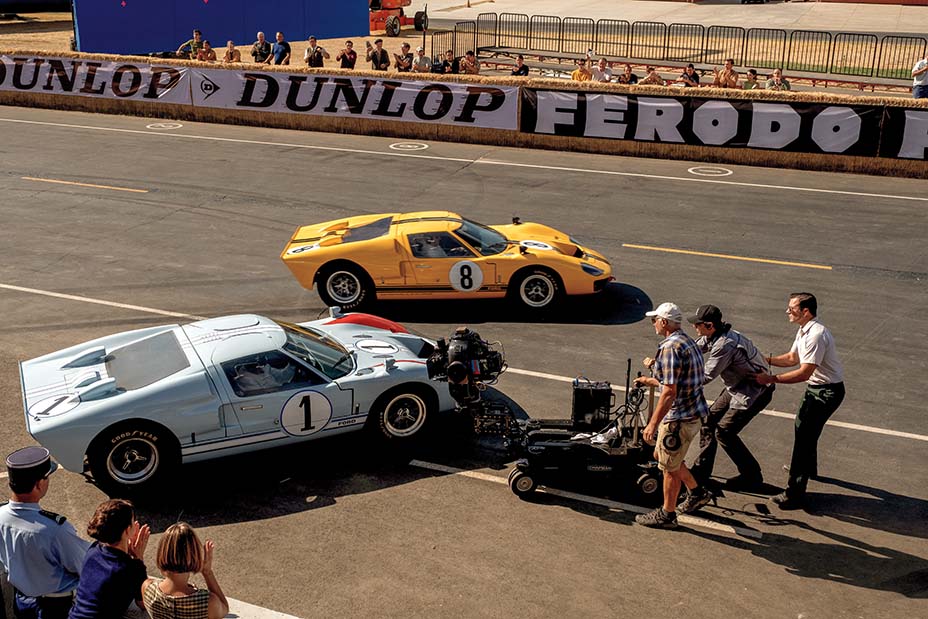 In February 2018, the studio gave the green light, on one condition: Mangold had to keep the budget under $100 million. Chernin Entertainment also agreed to produce. Mangold radically pared down the script and called up the Butterworth brothers for advice. “Every time we worked on it, it was like meeting an old friend,” says Jez. “He wanted to reshape to make it much more about the two central characters, Shelby and Miles.” If the script feels authentic, that’s because some of the actual people depicted in the film weighed in. On their first pass, the Butterworths, who share script credit with Keller, met with Shelby just before his death in 2012; Bale, meanwhile, sat for hours with Shelby’s son, Peter, who appears as a young boy (Noah Jupe) in the film.

Mangold and Bale had worked together previously on the 2007 Western 3:10 to Yuma, which helped immensely in convincing Bale to sign on. That made Damon, who joined the project shortly after Bale, the new guy in the group. “I read the script at the beginning of 2018 and loved it,” Damon recalls. “I’ve been wanting to work with both Jim and Christian, so it seemed too good to be true.”

After 10 long years, Ford v Ferrari was a go. But there was a hitch: Bale would need eight months to lose 70 pounds before principal photography could begin. The actor had gained much of the weight to play Dick Cheney in 2018’s Vice, a role that earned him an Oscar nomination. That pushed the start date to June 2018. When they finally gathered on set, Damon — whose own weight has also yo-yo’d for his various roles — asked Bale which diet he had relied on. 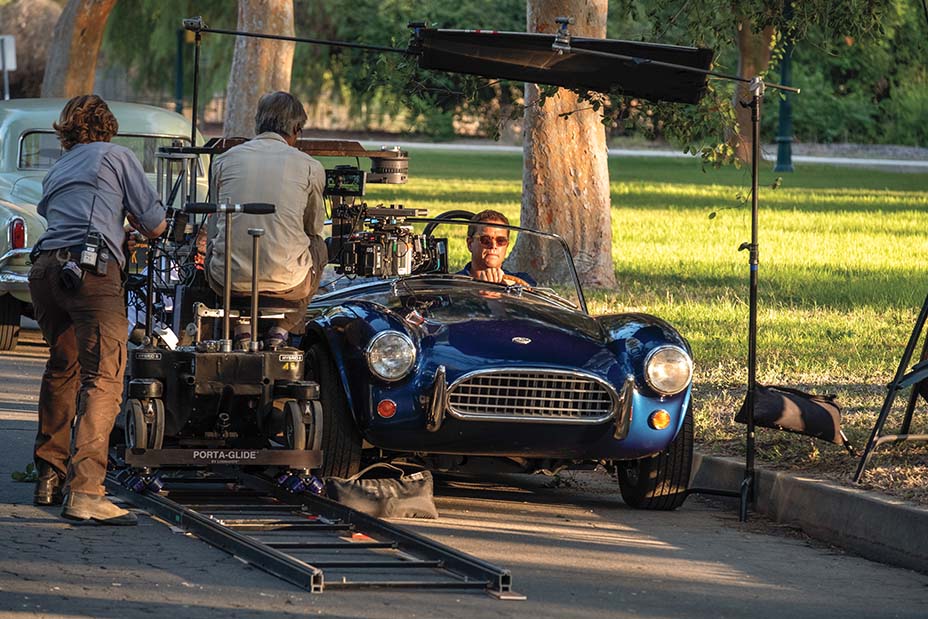 “I thought he was going to say, ‘the keto diet’ or ‘intermittent fasting plus running.’ Instead, he just looked at me and said, ‘I didn’t eat,’ ” Damon recalls. Hearing him describe the exchange, Bale laughs. “Not eating is the essence, right?” he says.

While starving himself to drop weight, Bale was also learning how to drive Formula One race cars. His trainer was Hollywood stunt driver Robert Nagle, and the two spent a week at a racing school in Arizona. Bale — a natural speed freak whose motorcycle-racing hobby ended seven or so years ago after a string of accidents — spent hours every day behind the wheel. “More than teaching Christian to drive,” Nagle says, “it was about him really understanding what a racer goes through and what the mental and physical challenges are. It’s far more taxing than people realize.”

Despite the hands-on training, Bale is not actually piloting the car during most of the race scenes. Phedon Papamichael, Mangold’s go-to cinematographer, and second-unit director Darrin Prescott — also an accomplished stunt driver — would rig Bale’s “hero” car with a pod on the roof or in the trunk area. There, one of more than 20 stunt drivers hired for Ford v Ferrari would strap in and actually maneuver the car. That way, Bale would still be experiencing the speed without controlling the vehicle. There were also cameras mounted on various parts of the car to capture Bale’s very real expressions. 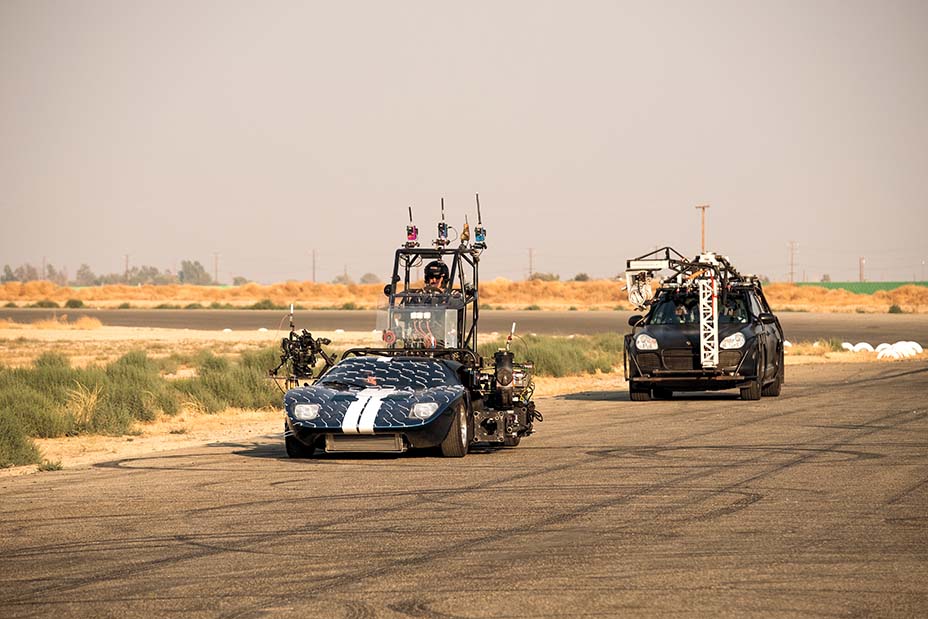 Another key component to filming the race scenes was what Mangold’s crew nicknamed the “Frankenstein car.” The vehicle, loaded down with cameras and driven by a stunt driver, would weave in and out of the other race cars on the track and capture the action. (Papamichael himself would sit in the passenger seat for some scenes.) “James wanted to maintain a more vintage aesthetic to the film,” says Prescott. He didn’t want “big, swoopy shots” that audiences of the Fast & Furious series have come to expect. It’s a testament to the stunt drivers’ professionalism that only one major mishap occurred on the shoot — when the Frankenstein smashed into another car. The stunt drivers were tossed around, but no one was hurt.

As for the vehicles, production designers borrowed current versions of the GT40s, Cobras and other muscle cars depicted in the film and retrofitted them into cars of that era, which could cost upward of $100,000 per vehicle — a relative bargain considering that an original Carroll Shelby GT40 or Cobra costs anywhere from $25 million to $45 million. 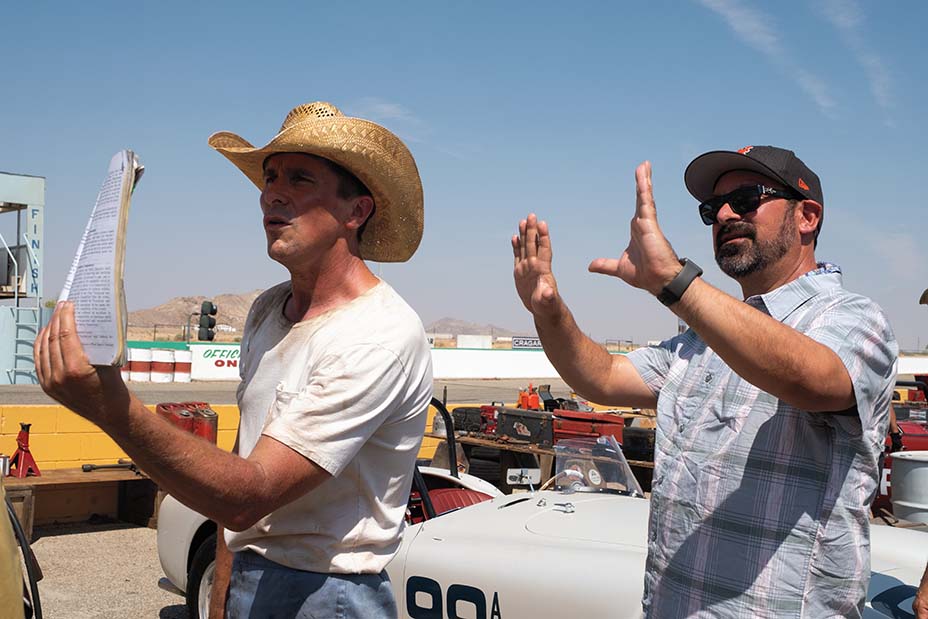 To ensure that the details were right, the production team got creative. Sound editor Don Sylvester paid a man in Ohio far less than the cost of a vintage car to let him record the thunderous engine growls of his hand-built GT40. Production designer François Audouy would pull to the side of the 405 freeway in Los Angeles to collect tire scraps for accident scenes. Says Audouy: “We didn’t have time to give someone a knife and shred steel-belted tires. It’s a messy, ugly job. So I would pull over and walk up and down the shoulder with a five-gallon bucket and collect whatever.”

Mangold and his crew filmed around California. The Willow Springs International Raceway in Rosamond, about 70 miles north of L.A, is the setting of an early race in the film, and a hangar at the Ontario International Airport became Shelby’s automobile headquarters (which, in real life, was near LAX). Other key locations during the 85-day shoot were in Georgia, including a lush racetrack in Savannah that served as a stand-in for much of the Le Mans course. Michael McCusker and Andrew Buckland started editing while second-unit production was still underway. “We were getting so much car footage early on, we knew it would take us a lot of time,” McCusker says.

With Ford v Ferrari‘s release at last just days away, a beaming Bale and Damon — aka Batman and Bourne — have become a familiar duo on the awards circuit. But they may face off in a superhero-like showdown at the Oscars — the studio is pushing both men for best actor. Damon isn’t too preoccupied with shiny ornaments, though — unless they’re on the hood of a car. “At this stage in our careers, we just wanted to have fun,” he says. “What we want now more than anything is for people to see it.”