Pretty much every actor Taika Waititi approached to star in Jojo Rabbit had the same reaction as Sam Rockwell. “I was a little reticent to play a Nazi,” he says.

Understandably, the story of a 10-year-old boy in World War II Germany who discovers his mother is hiding a Jewish girl in their home and enlists the guidance of his imaginary best friend — a wacky, kid-friendly Adolf Hitler — was not a particularly easy sell. “There is no ‘in’ with that logline,” Scarlett Johansson, who plays the mother, notes with a laugh.

But according to Waititi — the 44-year-old New Zealand director whose previous credits include quirky indies like What We Do in the Shadows and Hunt for the Wilderpeople, as well as Marvel tentpole Thor: Ragnarok — a $14 million surrealistic Third Reich comedy was exactly what the current zeitgeist needed. Especially one with an adorable kid at its center (Roman Griffin Davis plays Jojo “Rabbit” Betzler), a turn by the director himself as Hitler and a soundtrack filled with German-language versions of David Bowie and Beatles tunes (the rights to “Komm, Gib Mir Deine Hand” did not come easy).

“People say it’s a bit divisive,” says Waititi of his unconventional war movie, which opened Oct. 18. “But where I come from, that’s a good thing.” 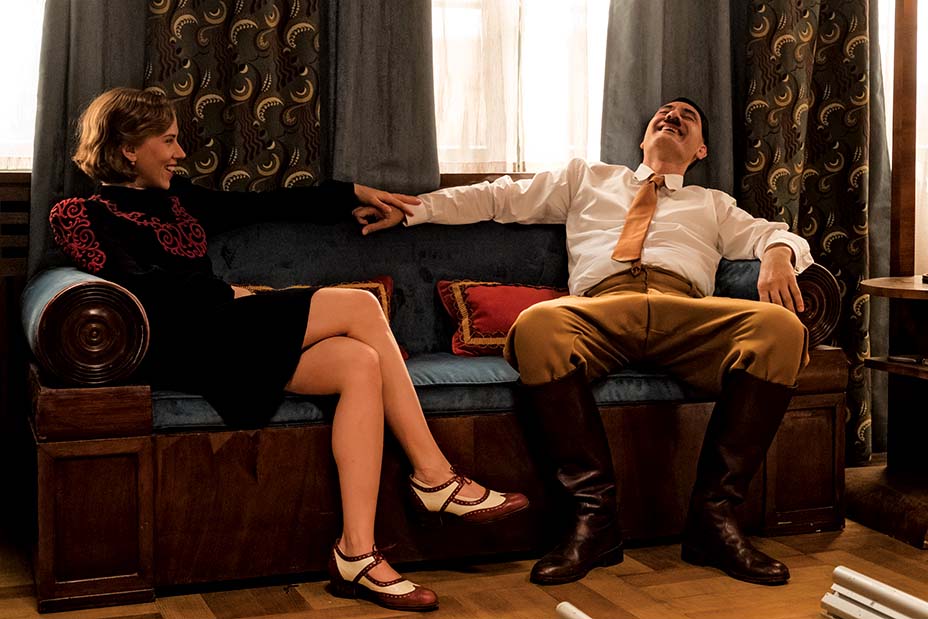 The original source material for the film was Christine Leunens’ 2004 novel Caging Skies, but it’s fair to say that the director took liberties. At no point in the book, for instance, does an imaginary Hitler make an appearance. That bit was invented by Waititi himself. And while he knew he wanted to make a movie about World War II — he’s a fan of Schindler’s List — he also understood that heavy drama was not his forte. “I felt like if I was going to reach any audience or try to make something that meant something, I couldn’t do a film that dramatic,” he says. So, while tapping out the script throughout 2011 — just after his coming-of-age drama Boy had become the highest-grossing native-made movie in New Zealand — Waititi added “elements that you wouldn’t normally have with these films.”

Studios, not surprisingly, did not flock to buy his comedy with Nazis, but the script did develop a following and in 2012 landed a spot on the Black List of top unproduced screenplays. Meanwhile, Waititi got on with his career, making his critically adored 2014 vampire mockumentary What We Do in the Shadows and his 2016 adventure comedy Hunt for the Wilderpeople and then, in 2017, Ragnarok, his first big Hollywood production, which grossed $853 million worldwide. Going from a big-budget comic book tentpole to a low-budget comedy could be seen as an odd career move, but for Waititi, a director with an offbeat sensibility, in the logic of Hollywood it sort of made sense.

Around that time, Fox Searchlight was gearing up its Oscar campaign for Guillermo del Toro’s girl-meets-fishman love story, The Shape of Water, and was looking for more auteur-driven movies with challenging concepts. “People think it was Thor that made [studios] confident enough to back Jojo Rabbit,” says Waitit’s longtime producer Carthew Neal, “but it was actually his earlier work they were responding to.” In fact, Waititi had just begun production on Ragnarok when Searchlight tracked him down in Australia to tell him it wanted to make Jojo. The studio, however, had one demand: It insisted that Waititi, who had hefty roles in both Boy and Shadows, play Hitler. The filmmaker, who is of Russian Jewish descent, hesitated. “I just didn’t want to have myself get clouded with negative shit while trying to play someone so evil,” he says. “But my ego is so massive, it was bound to happen.” 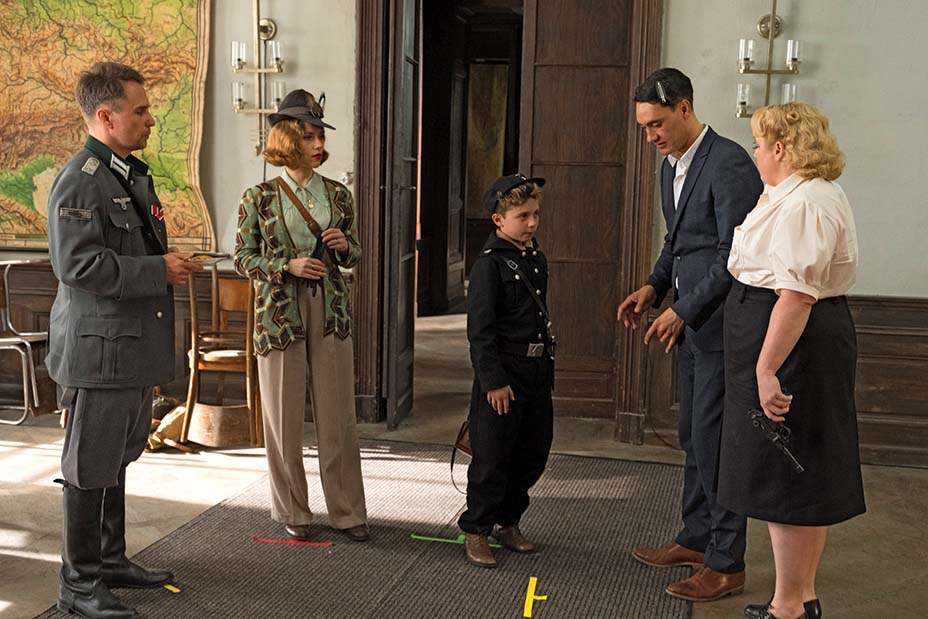 The rest of the cast was assembled quickly, as the clock started ticking down on a spring 2018 start date. Johansson came aboard after she’d been tipped off to the project by her Avengers co-star Chris Hemsworth. Like everyone, she was reluctant at first, but her agent kept bugging her to look at the script. “I cried when I read it, which rarely happens,” she says. After Johansson, Rockwell signed on as Jojo’s disillusioned Hitler Youth instructor and Rebel Wilson as a fellow teacher and book-burning obsessive. Finding the right boy to play Jojo, though, took longer than expected.

Waititi had some experience working with kids — two of his features, Boy and Wilderpeople, were led by minors — which helped during the search. “When you’re casting kids, you’re looking for somebody who is like the character,” he says. “Once you’ve found someone like that, then you don’t have to ask them to act.” Casting associates were dispatched to primary schools across the U.K. and New Zealand while the usual channels were explored in Los Angeles. German children were considered, but only if they spoke fluent English. Still, after auditioning more than a thousand kids, Waititi still didn’t have a Jojo. And there was only a month left before production was set to begin.

“With Taika, there is a confidence that it will all work out, but it might be last minute,” says Neal. “[My job] became about keeping everyone else calm.”

Roman Griffin Davis was on the Fox lot auditioning for Matt Damon and Christian Bale’s race car movie, Ford v Ferrari, when his mother dragged him to the studio offices to visit a friend. While in the hallways, a casting director suggested that the young British boy, then 10, also audition for an upcoming Fox Searchlight project. He was handed two sides and given 30 minutes to prepare. “I was reading the script and I was like, ‘Is this kid a Nazi?’ ” Davis recalls. “And my mom goes, ‘No, of course he’s not a Nazi.’ And I said, ‘No, I think this kid is a Nazi!’ ” With weeks to go before production, Davis landed the title role. 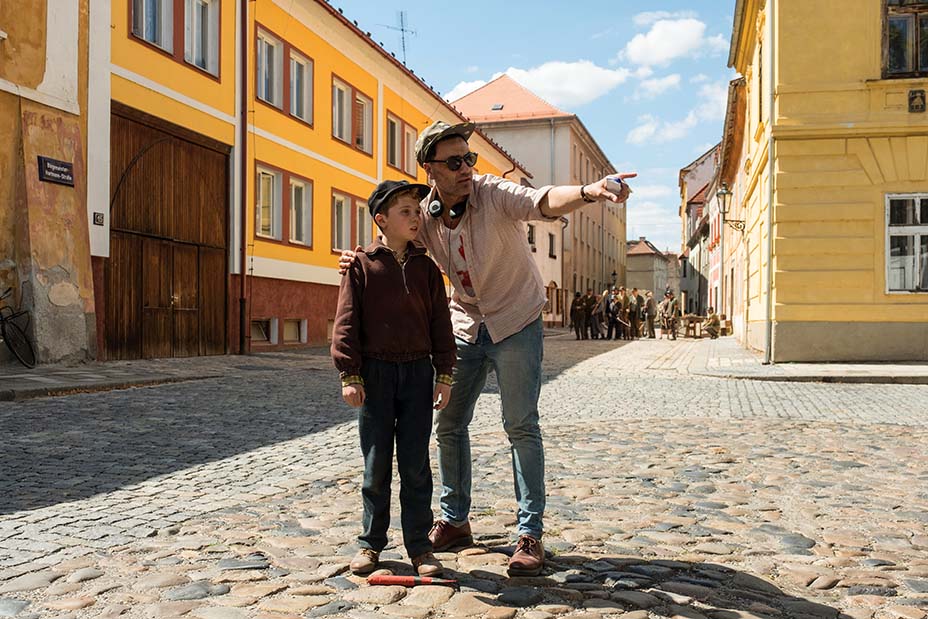 He was quickly flown to Prague, which was standing in for 1940s Berlin. “In Prague, they are used to making World War II movies, day in and day out. This is their bread and butter,” says Neal, who had heavily scouted locations across eastern Europe. But, given that the movie is told from the perspective of a 10-year-old, this wartime would look a lot different. The typical gray-brown-blue color scheme that paints many World War II reimaginings was swapped for an expansive palate of saturated greens, reds and oranges. Costume designer Mayes C. Rubeo borrowed pieces from Rome’s famed costume house, Tirelli Costumi, while her crew sewed 250 Hitler Youth uniforms for the extras, as well as three separate uniforms for Hitler.

Aside from a dramatic third act battle sequence, Waititi did not storyboard any of the film’s scenes. Instead, sets were erected in Prague’s Barrandov Studios — ironically, a production facility seized by Germany in 1939 and turned into a Nazi propaganda mill — that would allow Waititi and the actors to take advantage of any angle they desired. Even the exteriors, shot in the Czech towns of Zatec and Ustek — where modern-day air conditioning units were removed from buildings and SS recruitment posters were plastered along the side streets — were “360-degree sets” that “reduced all restrictions,” says Neal.

Another thing Waititi had learned working with kids is that they perform better when you shoot sequentially. That meant the director was often pulling triple duty in a single scene, directing the cast, making script revisions and acting, very often in full Hitler regalia. “When you’re working with a director who’s also acting with you, it’s hard because sometimes they are looking at you as a director and sometimes they are looking at you as a fellow actor,” says Johansson. “But then you’ve also got the Hitler garb, which was very strange.” 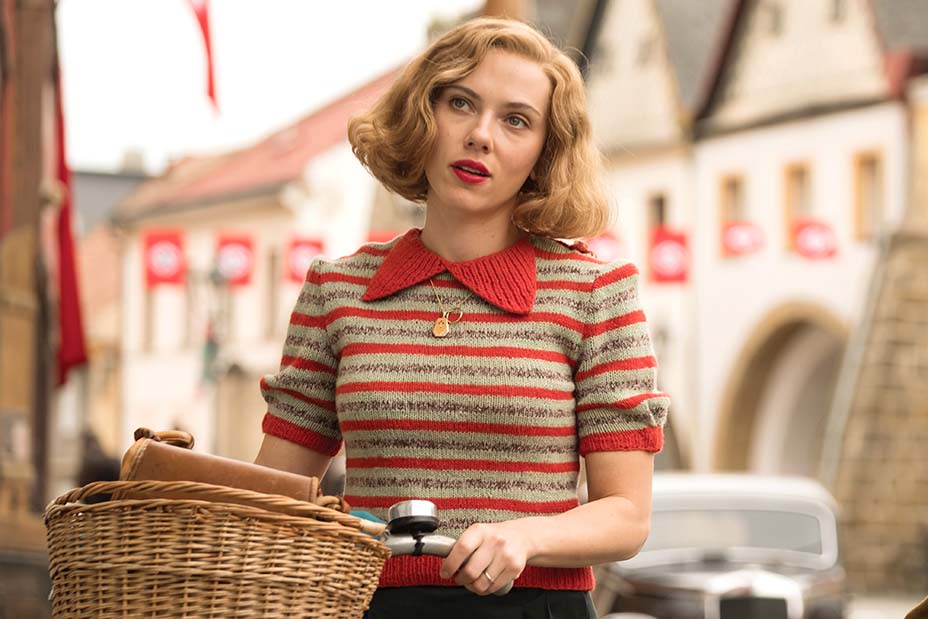 Thomasin McKenzie, the 19-year-old Kiwi actress who plays Elsa, the Jewish girl hiding in the walls of the Betzler home, also had to get used to taking direction from the Führer. “Just looking at Taika, you go, ‘OK, you are really funny and there is obviously a lot going on in your head,’ ” she says.

Once the 40-day production wrapped, Waititi placed a cold call to Oscar-winning composer Michael Giacchino, who’d scored projects ranging from Ratatouille to Jurassic World. Recalls Giacchino, “He was like, ‘Do you remember what you did for Up?’ And I go, ‘Yeah, I remember that.’ And he goes, ‘Just do that.’ ” While Waititi and his editor, Tom Eagles, spliced together footage, Giacchino and a 35-piece orchestra recorded about 45 minutes of fairy-tale-style music at Abbey Road Studios in London. But Waititi also wanted the soundtrack filled with more contemporary music, like Beatles songs. During research for the script, while watching documentaries on the Hitler Youth, Waititi couldn’t help but notice a creepy historical echo. “It struck me, the similarities between the crowd at Hitler’s rallies and the frenzy at Beatles concerts,” he says. Wrangling the rights to German-language Beatles songs for a comedy about Nazism proved to be difficult, though. “The first response is, ‘Um, I don’t think we want to do that,’ ” says Giacchino. But, having previously worked with Paul McCartney, the composer made a direct plea. “Once his people saw the film and understood, they made it happen,” he says.

The first assemblage of Jojo ran two hours and 40 minutes, way too long for a comedy. “We didn’t want it to turn into Titanic,” says Eagles. Cutting the film down to its final run time of 108 minutes took eight months, during which time there were extensive screenings with test audiences. “We needed to test different versions of things and iterations of jokes,” says Waititi. But the screenings weren’t all about tracking laughs. The filmmaker discovered, for instance, that some audience members had surprising reactions to a part late in the second act when imaginary Hitler starts to act more like the real one, lashing out against young Jojo. One viewer at a test screening began quietly reciting a prayer. “It was a reminder of the subject matter we were dealing with,” says Eagles. 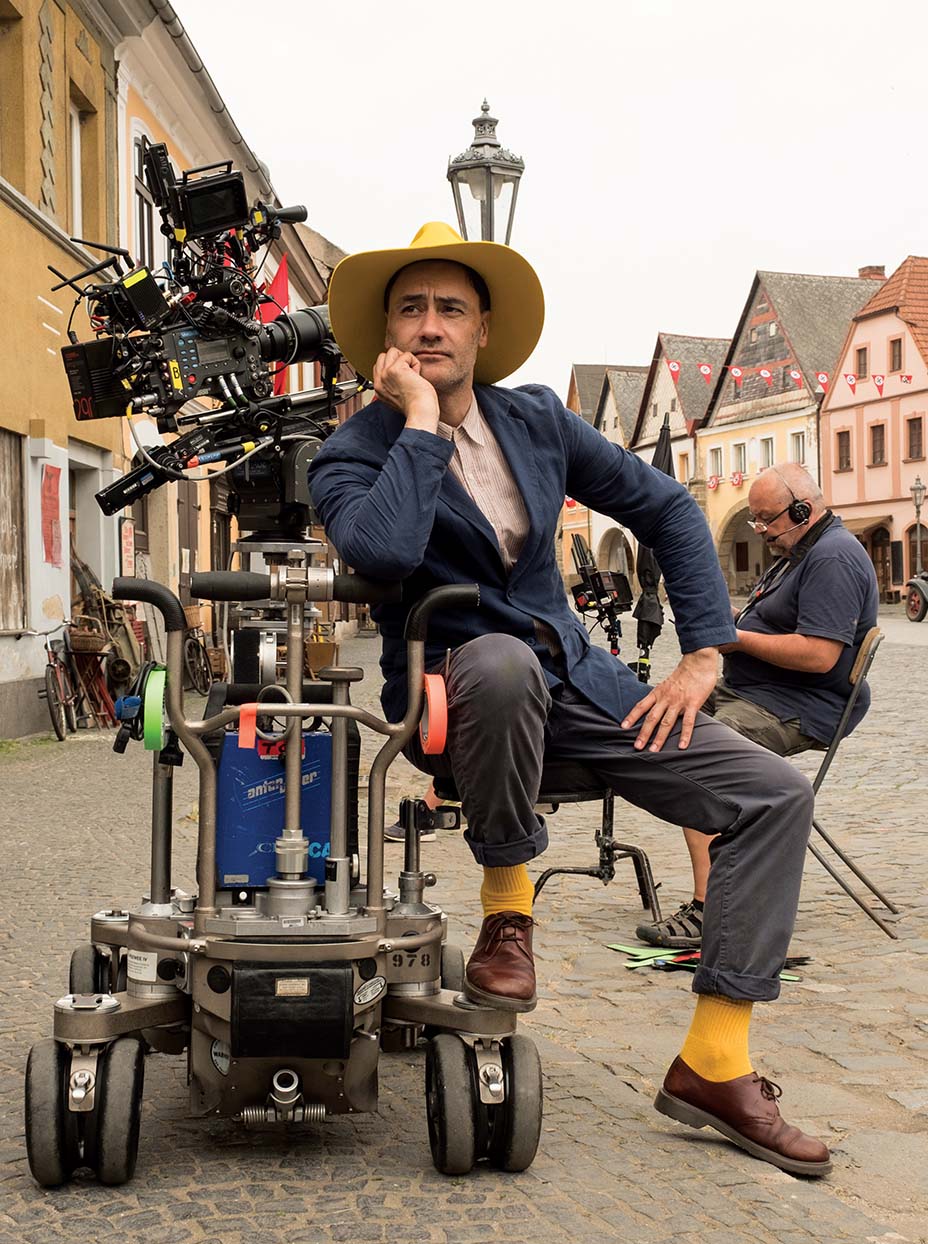 That subject matter can obviously be pretty polarizing, especially at a time when neo-Nazis appear to be resurging both in the U.S. and abroad (and especially for a studio that since production began had been absorbed by Disney). But Waititi believes that’s all the more reason why a movie like Jojo Rabbit needs to be in theaters. “To try to make a movie that can awaken the minds of youth, that would be quite a good thing,” says the director.

Despite concerns that Waititi was making light of the 20th century’s darkest hour — the very same complaint that was lobbed at 1998’s Life Is Beautiful, which went on to win a foreign-language Oscar — Jojo Rabbit won the audience award at the Toronto Film Festival in September. Reviews have been mixed (“A Holocaust-focused comic crowd-pleaser that won’t please all crowds,” said THR‘s Todd McCarthy). It had an impressive opening on the weekend of Oct. 18, with a $70,000 per-screen average across just five theaters.

As for the film’s message, its star believes it’s so simple that even an 11-year-old can understand it. “I think it’s important for kids to see how little bits of hate can end up going really far,” says Davis. “And to not be Nazis, I guess.”