When South Korean filmmaker Bong Joon Ho was in his early 20s, he took a job as a tutor for the son of a wildly wealthy family in Seoul.

The family lived in a palatial home in one of the city’s most exclusive enclaves, and Bong, who grew up in considerably less lavish circumstances, was to be the boy’s math tutor. He’d been introduced to the family, somewhat incognito, by his girlfriend at the time — now his wife of more than 20 years — who was already tutoring the boy in English. “They wanted another tutor for math, so she put me forward as a trustworthy friend, even though I was actually really bad at math,” Bong explains. “That’s how it works with those jobs. It’s not as if they put out lots of ads looking for domestic help — you’re introduced.”

That early brush with the super-rich obviously stuck with the now-50-year-old director, because it’s pretty much the premise of his seventh film, Parasite, which won the Palme d’Or at Cannes in May, is already Bong’s biggest international hit (closing in on $100 million worldwide since its release Oct. 11) and seems likely to become South Korea’s first foreign-language Oscar nominee (and maybe even a best picture and best director contender).

Like all of Bong’s genre-bending movies — including The Host and Okja — Parasite defies easy categorization. The film tells the story of two mirroring families, the wealthy Parks and the poor Kims. When 20-something Kim Ki-woo (played by Choi Woo-sik) lands a job as an English tutor for the rich family’s daughter, he sniffs an opportunity and suggests his younger sister, posing as a friend of a friend, as an art tutor for the wealthy family’s rowdy little boy. Before long, the siblings finagle their father a job as the Parks’ chauffeur, and their mom manages to get hired as housekeeper. The twist: To keep their ruse running, the Kims have to pretend they don’t know one another.

“This idea of a poor family infiltrating the lives of a rich one is where I first delved in,” says Bong, adding that his intellectual ideas for the project — many critics have interpreted the film as a scathing critique of capitalism and income inequality — came much later in his process. “It was more like putting these characters together in a very controlled environment and then watching the chemical reactions unfold.” 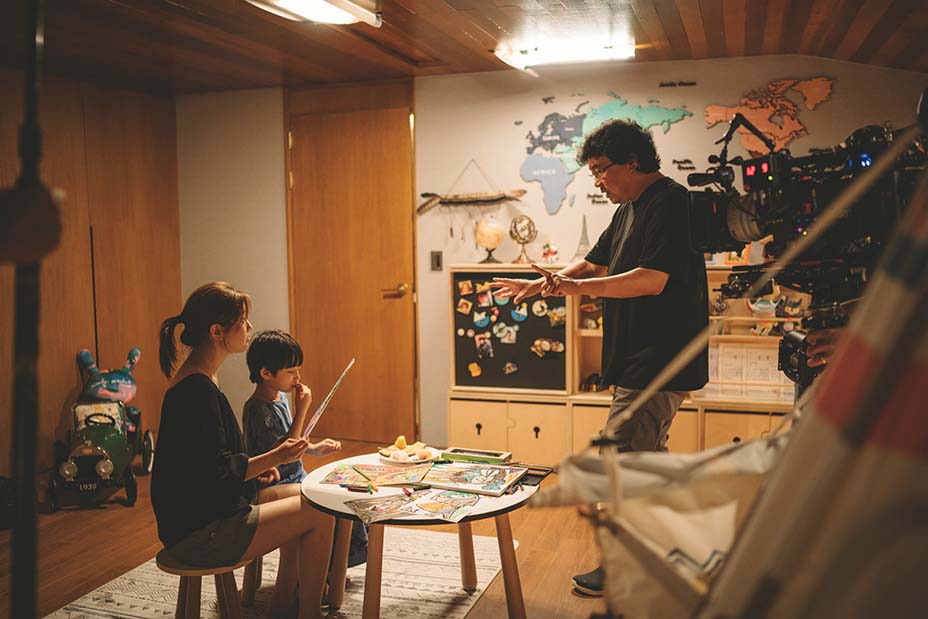 Bong was at work on his 2013 sci-fi fantasy thriller Snowpiercer when he started considering turning his own tutoring experience into a feature film, although at first, he was thinking of it more as a potential stage production. A theater actor friend had been urging him to write a play, which prompted the director to ponder stories that could be achieved with limited staging. “It could be done mostly in just two homes,” Bong explains. “But I thought a lot of fascinating cinematic elements could come out of it because in reality the rich and poor so rarely really mix together. They’re always separated. But when you’re working as a tutor or a housekeeper, you’re in the most private spaces, and both sides are brought together in such intimacy.”

After finishing Snowpiercer, Bong dashed off a 15-page treatment for the first half of Parasite and made arrangements to direct the project for Korean studios Barunson E&A and CJ Entertainment at a budget of $12 million. In the meantime, he went ahead making Okja for Netflix, handing off his Parasite treatment to his production assistant on Snowpiercer, Han Jin Won, asking him to compile research for the script. “Bong made it seem like it would be a light and easy project, just a couple hours of research a day while he worked on Okja,” says Han, 35. “In a good way, he sort of fooled me. Once I got started, I was basically working on it every moment that I wasn’t sleeping.”

Han then spent months meeting and interviewing real-life housekeepers, tutors and chauffeurs, visiting and photographing lower-class and wealthy neighborhoods around Seoul. He would meet regularly with Bong to discuss his findings, sharing his photos and playing clips from his interviews. Bong was so impressed, he asked Han to take a crack at turning the treatment into a finished screenplay. Han eventually wrote three different versions, each shaped by feedback from Bong. “Everything I was doing, I realized, was about creating a giant library of ideas and details that Bong could draw from when he sat down to write his own version of the script,” Han says.

In mid-2017 — after Okja was released — Bong returned to Parasite in earnest, picking up the script from Han. He says he was surprised by how quickly he managed to puzzle out the second half of the film. “It was kind of like when you have water draining in the sink,” Bong explains. “At first, it’s very quiet and you barely notice the waterline descending; but near the end, you start to hear a gurgling as everything rushes down the drain. Writing Parasite was kind of like that.”

When Han received the final copy, he was astonished to find that his name appeared alongside Bong’s as a co-writer. “My hands were shaking when I picked it up,” Han says. “I couldn’t read it on the spot; I had to go hide in my favorite coffee shop and take my time.”

Long before he had finished writing Parasite, Bong had decided it would co-star his longtime collaborator Song Kang-ho as the Kim family patriarch. Parasite is the fourth film Bong and Song have made together, following their joint ventures in movies like Memories of Murder and The Host. “He always gives me a sense of relief, even when I’m still writing,” Bong explains, “because I know that with his energy and his delicacy, even the film’s boldest parts will be convincing.” 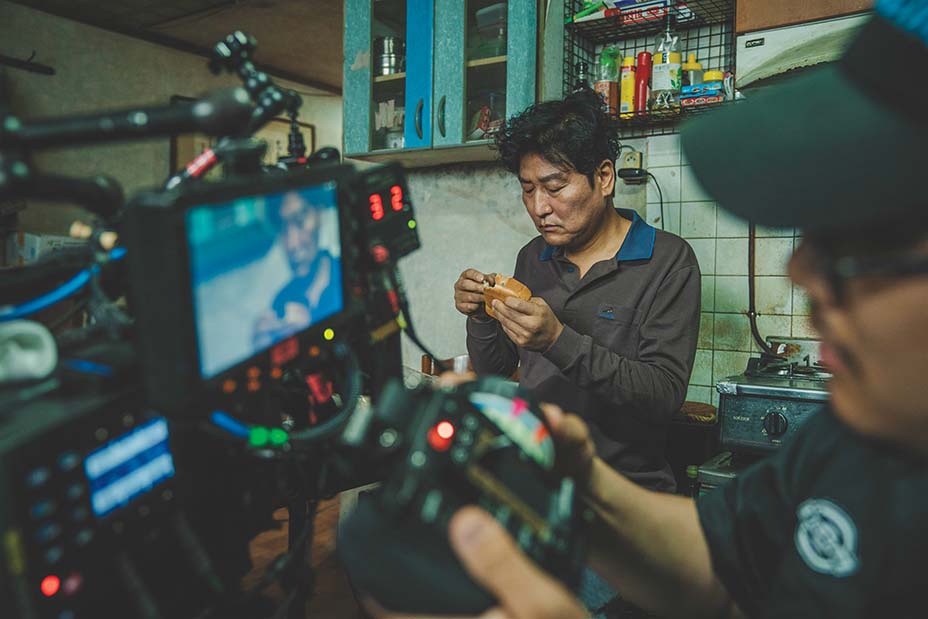 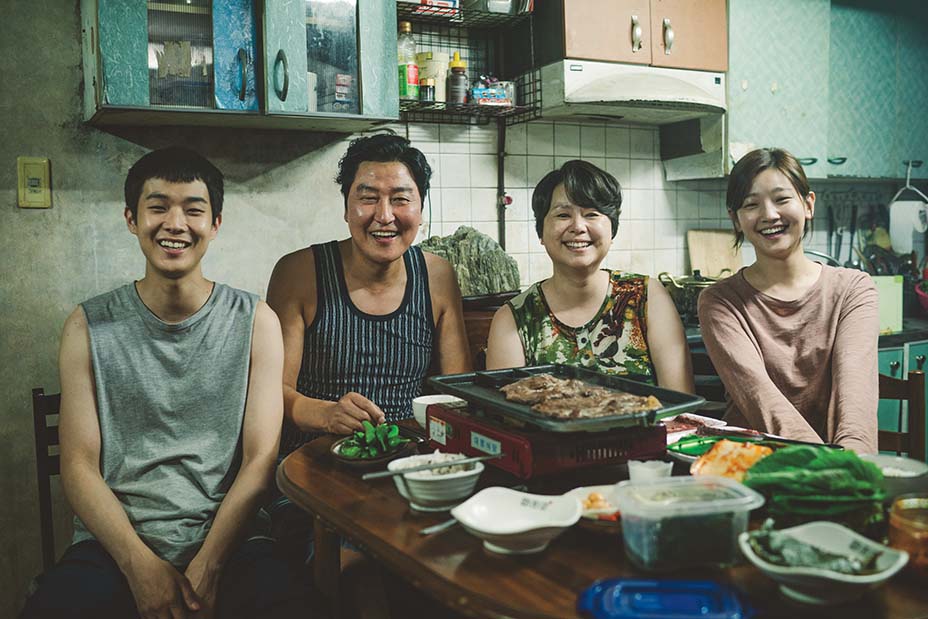 Song, 52, says that maintaining dramatic cohesion throughout Parasite‘s twists and turns was something he approached very deliberately early on. “Overall, the film doesn’t fit any conventional genre, and it doesn’t have a familiar structure,” he says. “So I really had to think hard about how to make sure that the audience doesn’t perceive the film as too strange. I was always thinking of this bigger picture — how to really persuade them, and make sure that the drama and the characters flow naturally together.”

Choi says he was so nervous playing Song’s son that on the first day of shooting he found it difficult to look the veteran actor in the eye. “For every kid in Korea who wants to be an actor, the idea of working with Song Kang-ho is like a dream,” he says. “The whole cast was kind of depending on him.”

Almost as important as the actors, though, was the film’s settings — the two mirror-image homes where virtually all the action takes place. “Although this film doesn’t have a lot of sets, I understood that these houses would be very important to its symbolic language, because 80 percent of the story happens inside them,” says production designer Lee Ha-jun, who designed each home with parallel front-facing windows (shaped in classic widescreen aspect ratio). “Essentially, they’re looking through the same window, but they’re seeing completely different things,” he explains. Adds Bong, “The characters in the poor house have no privacy. They’re completely exposed to the street — sometimes fumigation gas or floodwater might flow in; and there’s a drunk guy who regularly urinates right outside their window.” The wealthy family’s central window, on the other hand, looks out onto a beautiful garden. “When it rains, instead of worrying about floodwater, they look out and appreciate the mood and the view,” says Bong.

In fact, both houses were built entirely from scratch. The Park family mansion was constructed on a vacant outdoor lot in the western Korean city of Jeonju, while the Kims’ cramped semi-basement apartment and the entire lower-class neighborhood that surrounds it were built within an enormous water tank (for plot reasons that become apparent late in the film). “A lot of people ask us how we found the rich family’s house, or which part of Seoul the poor neighborhood is actually in,” says Bong. “I’m always very happy when I get those responses, because it feels like we successfully built a real universe for this film.” 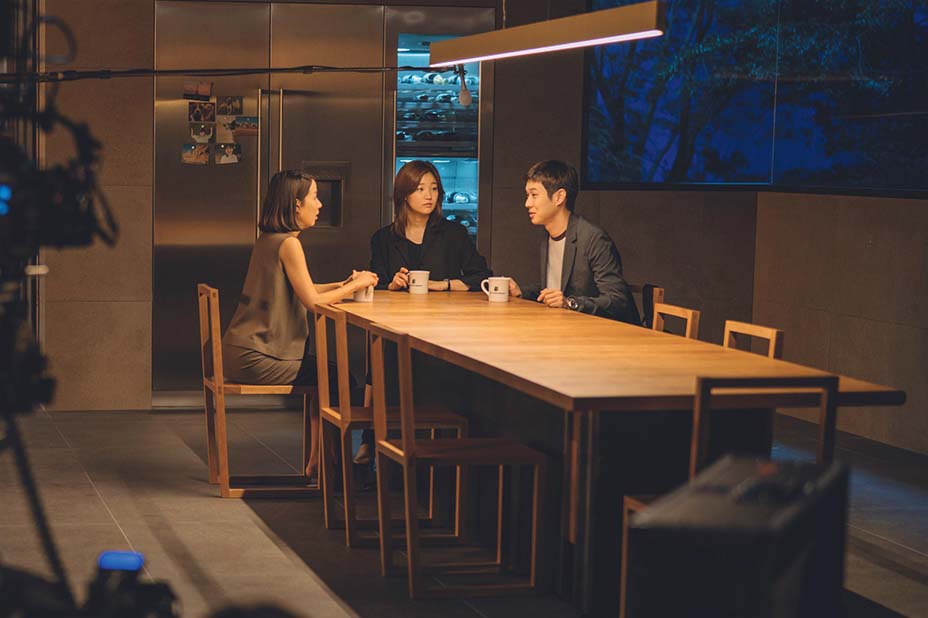 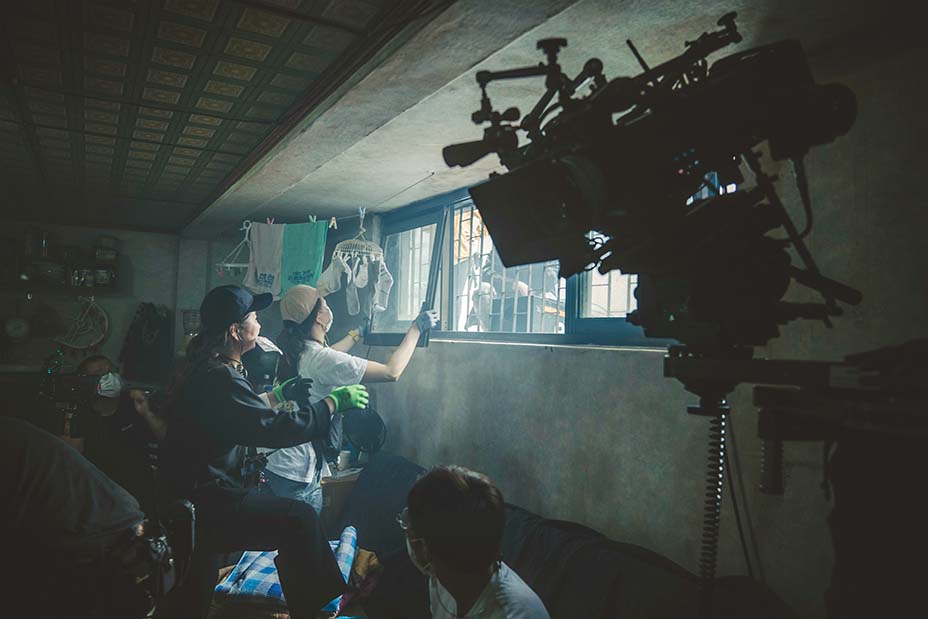 Contrasts were also drawn through the homes’ lighting. For the semi-basement home, only conventional fluorescent lighting was used, and the street lamps outside were given a dim, reddish color. “The combination created a very dull, deadening feeling,” observes the film’s cinematographer Hong Kyung-pyo. Shooting at the Park home, on the other hand, was done in natural light and only warm-toned lighting was used in the interiors.

Bong’s blending of genres often involves special, sometimes contradictory demands on his music coordinator — in Parasite‘s case, 37-year-old South Korean composer Jung Jaeil. For the film’s opening sequence, for instance, the script called for a piano piece that was “hopeful and very anxious at the same time.” Over months, Jung composed four versions, all of which were rejected by Bong. “After he passed on the fourth, I felt very depressed,” Jung remembers. Jung drank himself into a stupor and “just slept on my sofa.” The next morning, he woke up with a terrible hangover and began improvising over a narrow middle section of his piano. “I had basically lost all hope, but that was the version he accepted.”

Bong and his longtime editor Yang Jinmo began splicing together footage at the start of October 2018. “When [we were] working on Snowpiercer, it was such a big project, with so many characters,” remembers Yang. “I suspect that’s kind of why he wanted to work on a very focused project like Parasite, where he would be able to delve into every detail.” “Delve” is the right word for it. Bong and Yang spent three months burying themselves in footage. “If filmmaking is like digging a hole, Parasite felt like digging a very deep, very narrow well,” says the director. Bong’s films have few cuts — Parasite has only 960, compared to about 1,500 for a typical Korean action movie — mostly because Bong prefers to edit within the camera and has a penchant for panning. “But even though there were fewer shots, we touched every single one of them during editing,” Yang says. “We were never like, ‘Oh, that shot actually looks fine, let’s just move on.’ We made adjustments to every detail.”

When Parasite premiered at Cannes in May — Bong’s fifth outing at the festival — the awards season drumbeat began building almost immediately. The film was met with near unanimous critical acclaim (“gripping and finely crafted,” said THR) — and then it bagged South Korea its first Palme d’Or. The momentum continued — and accelerated — in mid-October, when Neon, which acquired Parasite at the American Film Market in 2018, began rolling the film out in select U.S. theaters. Over its opening weekend, Parasite scored the highest ever per-screen average ($125,421) for a foreign-language release.

“You know, I’ve been making films for 20 years, and Parasite‘s release in the States coincided with that anniversary,” Bong says. “The reaction this film has received is already greater than anything I hoped for. As for the Academy Awards, I’m still very much an amateur at this process. It seems you meet a lot of people, and you talk a lot about movies — so, I’m having a lot of fun.”