When Disney decided to make Moana, it sent filmmakers on a research trip to the islands of the South Pacific. When it made Frozen, it sent them to search for inspiration in the fjords of Norway. For Ralph Breaks the Internet — the $175 million computer-animated sequel to the Oscar-nominated 2012 hit Wreck-It Ralph — in which video game characters Ralph (John C. Reilly) and Vanellope (Sarah Silverman) flee the arcade and embark on an adventure through the vast reaches of cyberspace, Disney sent animators to Fry’s Electronics.

“We bought a couple of routers and a motherboard,” says Cory Loftis, the film’s production designer, “and when we opened them up, it looked like a city. And that sort of became the basis for what the internet looked like in the movie — the structure of how everything was laid out at 45-degree angles.” 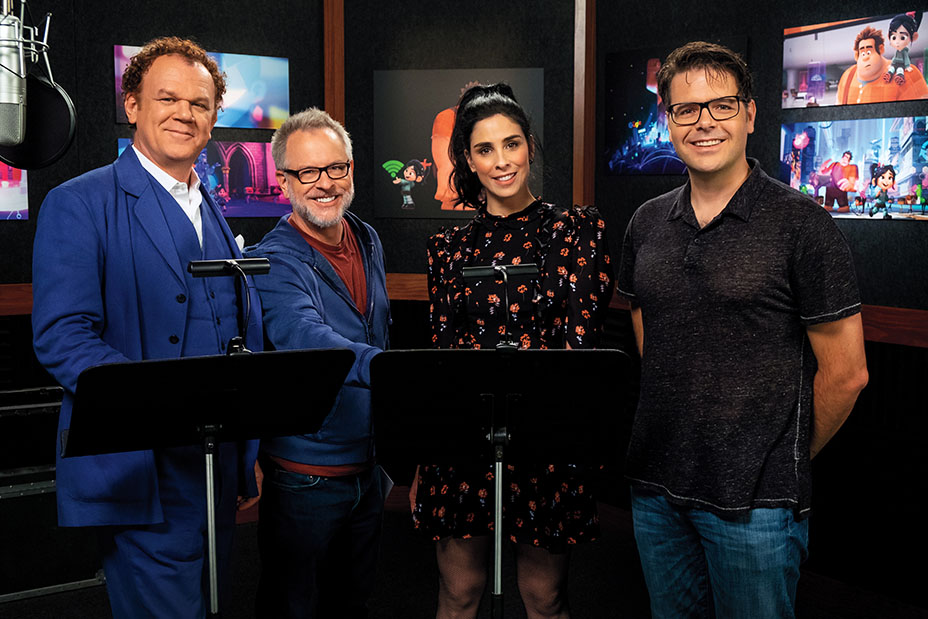 Figuring out how to depict cyberspace has been bedeviling Hollywood since before the internet was on everybody’s phone, going as far back as Tron and War Games. “The internet is anything and nothing and everything,” notes Phil Johnston (one of the writers on the original Wreck-It Ralph), who co-wrote this sequel with Pamela Ribon and co-directed it with Rich Moore (one of the original’s directors). But what made this attempt all the more challenging was that Johnston and Moore wanted to take viewers inside an internet that audiences would recognize, with familiar names and destinations. The story is set in motion when the steering wheel breaks on Vanellope’s arcade game, Sugar Rush, and she and Ralph head to the one place where anyone can find anything: eBay. Indeed, the website practically becomes a character all its own.

“We felt that if we tried to change the name or make some variation on it, the audience would get confused,” says producer Clark Spencer. “We decided to stick with the idea that it was eBay and have the audience see the auctioneers working at eBay.” They even brought in real auctioneers to voice the endless sales chatter for everything from a portrait titled “Sorrowful Kitten” to the Sugar Rush steering wheel that Vanellope and Ralph spend much of the film hunting down. 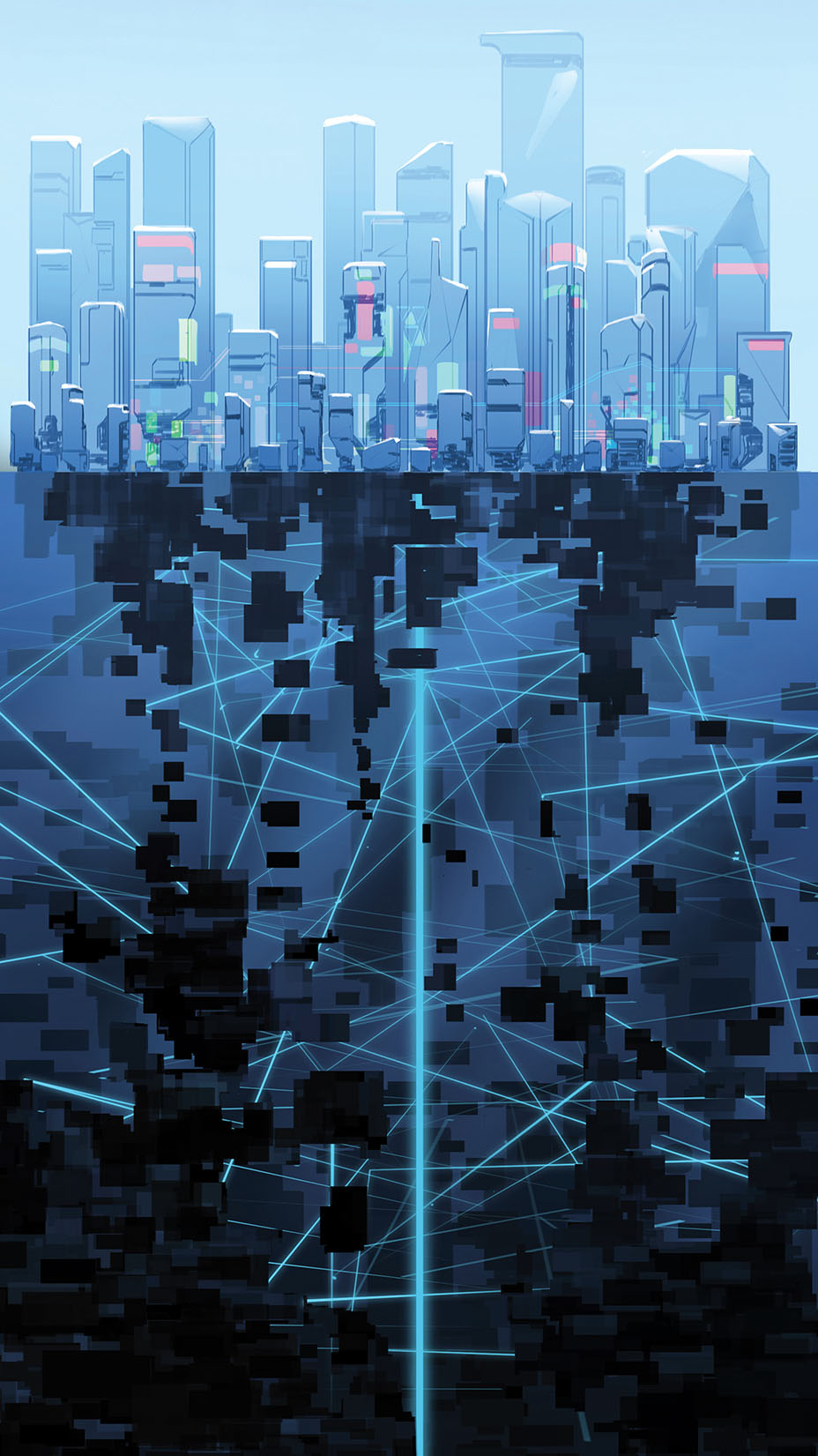 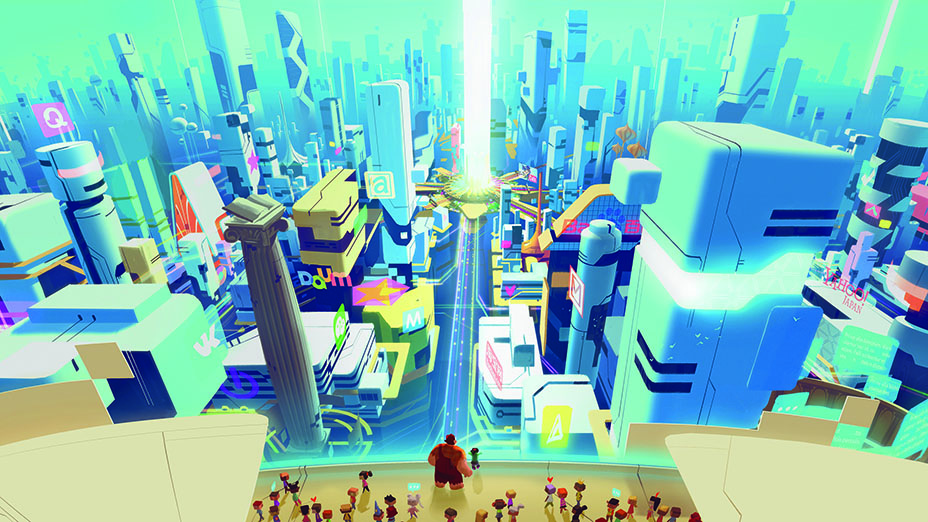 Like Steven Spielberg’s Ready Player One, Ralph Breaks the Internet is a sprawling mashup of pop-culture iconography, only in this case the iconography is websites and online games. Along with eBay, Google makes an appearance, as does Amazon. Fortunately for the filmmakers, none of those brands required clearance — copyright law considers it “fair use” to reference them — but specific characters from video games, like Sonic and Pac-Man, most certainly did. That meant an extensive clearance process. “Our production team met with our legal team on a weekly basis for the entire movie,” recalls Loftis.

Not surprisingly, among the easiest characters to get permission to use were from home studio Disney. Buzz Lightyear, Iron Man and C-3PO all have screen time. Even Baby Groot from Guardians of the Galaxy makes an appearance, on a website Ralph and Vanellope visit called “Ask Groot Anything,” in which the treelike alien fields random questions. (His answers are always the same: “I am Groot.”) But even with Disney IP, Johnston and Moore made sure to consult with creators. “It just felt right to us to include them,” says Spencer, “even to the point of having the Marvel team look at the Groot animation. They know the character better than we do.”

At times, extreme measures were taken to achieve verisimilitude. For a scene in which Vanellope finds herself in a dressing room full of Disney princesses, the filmmakers reunited 11 of the original voice actors, including Jodi Benson (Ariel from The Little Mermaid), Paige O’Hara (Belle from Beauty and the Beast), Linda Larkin (Jasmine from Aladdin), Anika Noni Rose (Tiana from The Princess and the Frog), Mandy Moore (Rapunzel from Tangled) and Kristen Bell and Idina Menzel (Anna and Elsa from Frozen, respectively). “They were so game to do it,” says Moore. 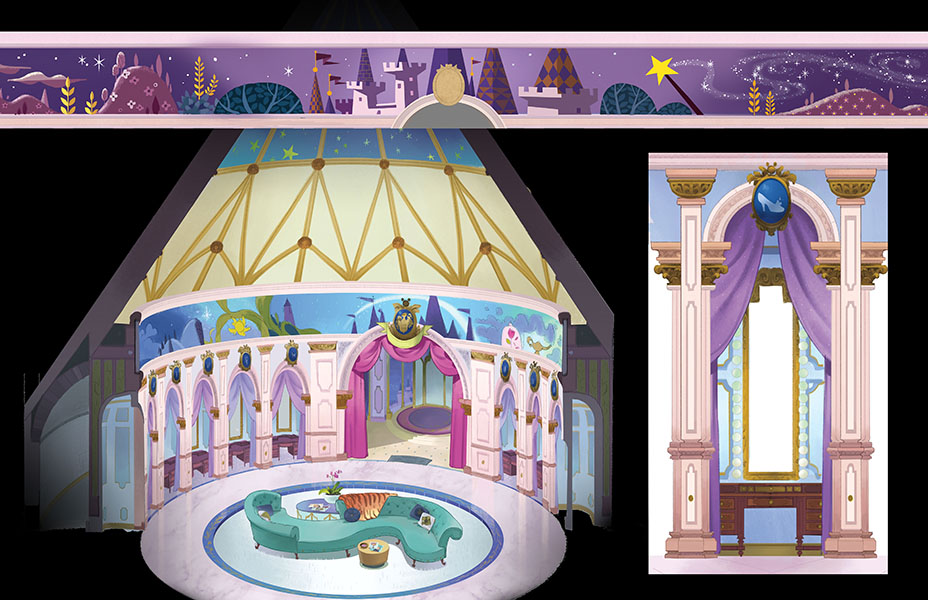 Of course, along with the legacy characters, Vanellope and Ralph encounter a slew of new creations, like an egghead search engine voiced by Alan Tudyk called KnowsMore (“Truman Capote meets Droopy Dog,” is how Johnston describes him) and a trendy sharing-site algorithm named Yesss (voiced by Taraji P. Henson). Also central to the plot is Shank, a racer from a game called Slaughter Race who becomes a big-sister figure to Vanellope. Moore remembers casting the character. “We were like, ‘Who could we get to play this Gal Gadot character?’ Finally, somebody said, ‘What about Gal Gadot?’ “ 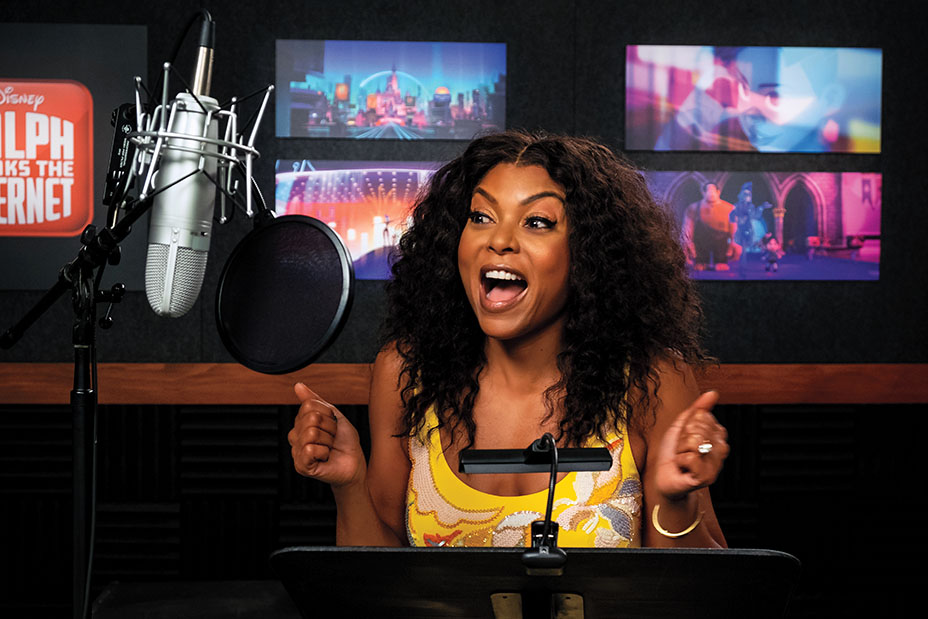 While the new characters had to be designed from the ground up, re-creating the old familiar faces was in some ways more challenging. “We had to rebuild everything,” says Matthias Lechner, art director of environments, who spent more than three years at Disney Animation in Burbank working with a team of animators. “You’d walk around, and one person was building the Death Star, someone else was making Dumbo or Iron Man.” 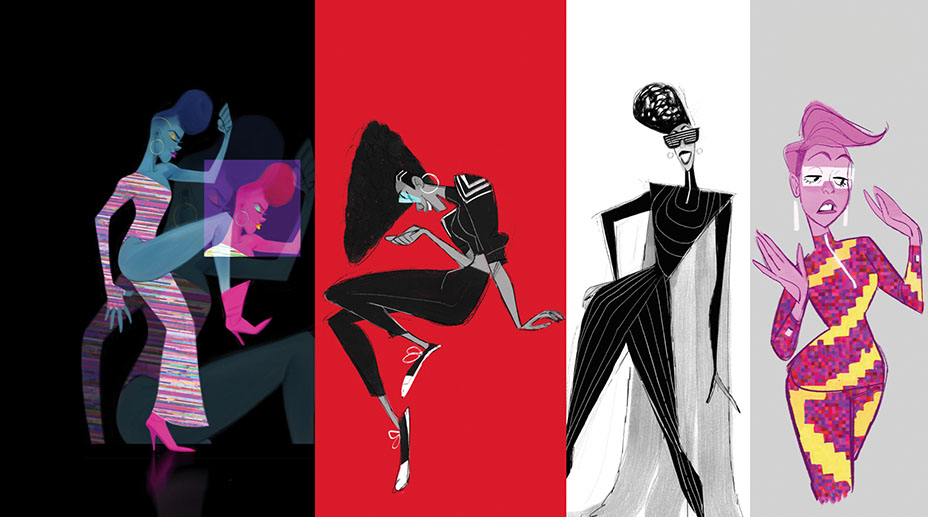 Some of the more recent legacy characters, like Moana, already existed in 3D. But the earlier princesses, who were drawn in 2D, required digital updating. “Snow White’s dress was yellow, but you can’t really tell the type of fabric,” says Loftis. “We had to bring the 2D characters to the same reality as the 3D ones.”

That Disney princess scene stole the show when it was unveiled at the 2017 D23 Expo, but it sparked some controversy when the trailer was released. Some on social media complained that Tiana’s skin tone looked too pale. The filmmakers took the criticism to heart and made some tweaks. “These characters are too important to us to not be absolutely perfect,” says Spencer. “So we went back into Tiana and made some adjustments to her hair and her skin color. When you are translating a character from 2D, and suddenly you are seeing them in CG, there are just things [that are going to look different].”

As the filmmakers were racing toward the finish line, they hit another potential speed bump with a fresh controversy: In November 2017, Disney Animation’s chief creative John Lasseter admitted to “missteps” amid rumors of inappropriate behavior and took a time-out from the studio (on June 8, he announced that he would be stepping down from his role for good). “There was this question of, ‘Is he coming back? What’s going to happen?’ ” says Moore. “But Phil and I quickly decided that we had a job to do. We make movies. This place has never been about one person. It’s been about the creative team.”

But while they were continuing to move forward, on June 19 Disney named a new chief creative who turned out to be someone who was more than familiar with their story: Jennifer Lee, the Oscar-winning director behind Frozen. Lee happened to start her career at the studio as a writer on … Wreck-It Ralph. “She and Phil Johnston went to Columbia Film School together,” notes Spencer. “They have an incredibly long friendship. That’s why Jennifer is here at Disney — Phil is the one who recommended her to come out and be a part of Wreck-It Ralph.”

Lee had already been providing notes on Ralph Breaks the Internet, helping them to streamline the final act, which culminates a story that’s ultimately about friendship.

Additionally, she kept her eye on the princess scene. Says Spencer, “She was definitely looking to make sure we were on character with Elsa.” 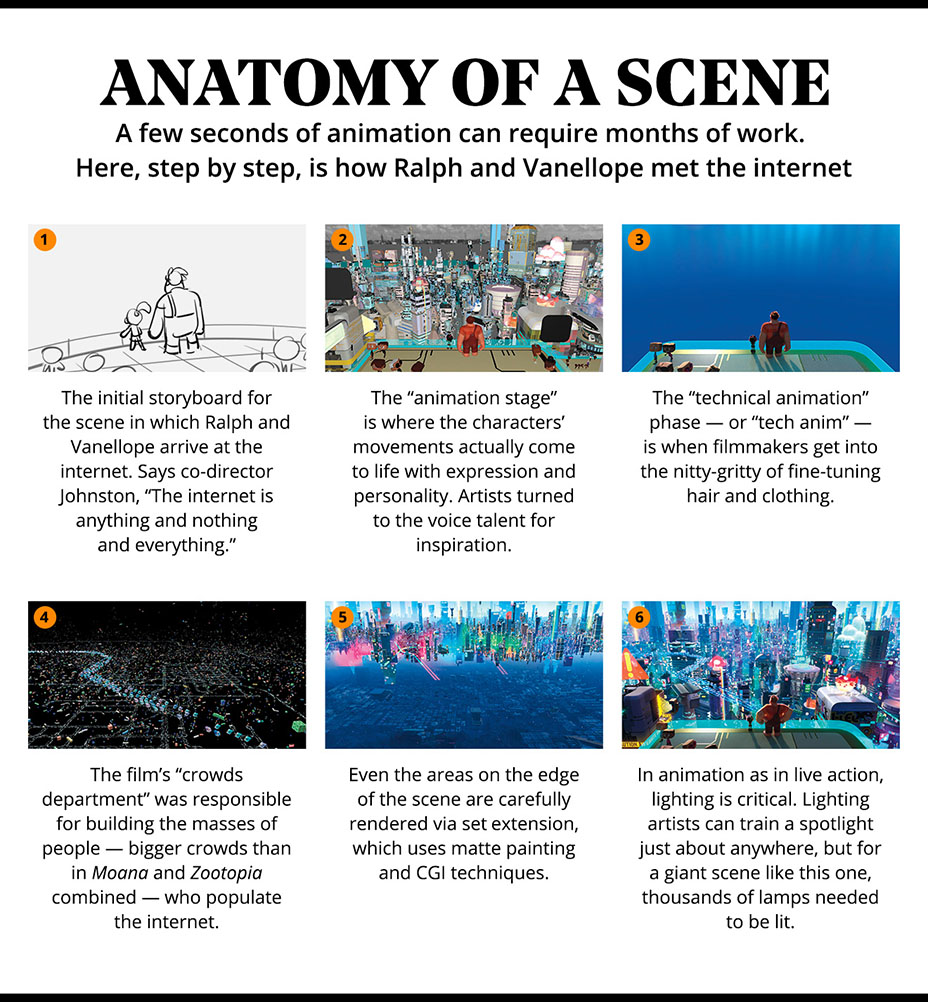