If you’re going to play Mary Poppins, it helps to be comfortable with heights.

“It turns out I am not,” says Emily Blunt, star of Mary Poppins Returns, Disney’s $130 million, 54-years-in-the-making sequel to the 1964 classic that opens Dec. 19. “There was this scene we did near Big Ben — just me on a wire, harnessed within an inch of my life, dangling 50 feet in the air. For some reason I really lost my nerve doing that one. I did three takes and shouted, ‘I’m done! Bring me down!’ I don’t know why.”

It may have been more than just a fear of flying. Returning P.L. Travers’ umbrella-toting magical nanny to the screen was a task not even a shovelful of sugar could have made any less daunting. And not only for Blunt — who was taking on a role that Julie Andrews had been practically perfect for in every way — but also for Disney and director Rob Marshall.

The original film is the crown jewel of the studio’s live-action library, the most honored movie in its history (13 Oscar nominations, with five wins, including best picture, best actress and best original score). It was Disney’s biggest box-office smash of the 1960s, grossing $31 million domestically, about $250 million in today’s dollars — a windfall that helped bankroll the construction of Walt Disney World. After five decades of theatrical rereleases (in 17 different languages), scores of TV broadcasts, multiple home video sets ($180 million from DVD sales alone) and countless digital downloads, it may well be the most-seen, best-loved children’s film of all time — a jolly movie memory for billions around the world. “It’s such a nostalgic film for so many people,” says Blunt, who didn’t want to be the one to mess all that up. “So when Rob Marshall called to offer me the role, my first reaction was pretty much abject terror.”

There have been previous attempts at a Poppins sequel. The first was by Walt Disney himself, who approached Travers a year after the first movie to pitch a second. But the prickly author shot him down. That Hollywood ending in Saving Mr. Banks, the 2013 Tom Hanks-Emma Thompson movie about Walt’s relationship with Travers, in which Travers breaks down in joyful tears at the Mary Poppins premiere? It wasn’t remotely true. In reality, she loathed almost everything about the adaptation, especially the songs and the animation. (She even tried to give Walt notes at the real Chinese Theatre premiere.) After Disney died in 1966, it was more than 20 years before another of the studio’s moguls would attempt to relaunch the property. But Jeffrey Katzenberg didn’t get very far with Travers either. 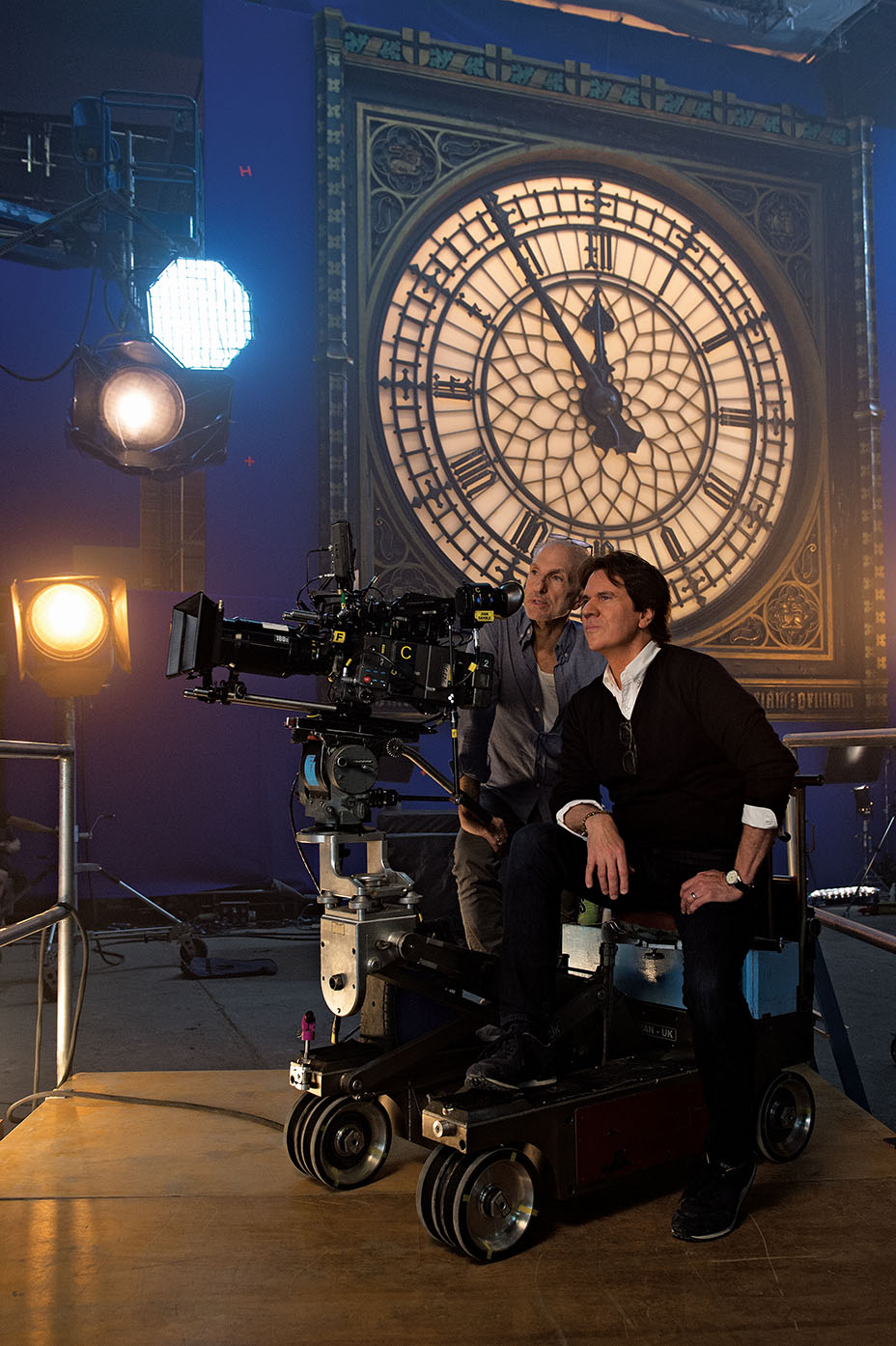 “When he came to Disney in the 1980s, Jeffrey looked in the vaults to see what jewels he could find,” says Martin Kaplan, who was vp live action at Disney from 1987 to 1999 (he’s now a professor at USC’s Annenberg School of Communication). “And Mary Poppins was the most guarded jewel of them all.” Kaplan flew to London to meet with Travers, then in her 80s, on five occasions — twice bringing Katzenberg along — trying to nail down a sequel. They pitched her a next-generation plot line, with the Banks kids grown up and Andrews playing an older Poppins. Travers hated everything about the idea, except for Andrews. She suggested a sequel set just one year after the original, but with the older actress still playing the part. “Julie looked great for her age. But still, it didn’t make sense,” says Kaplan. “Also, Travers had all these rules: ‘Mary Poppins cannot wear red because everyone knows Mary Poppins never wears red.’ It just became impossible to deal with her. Finally, we gave up.”

Twenty more years passed. Michael Eisner fired Katzenberg in 1994, Travers died in 1996, and by the time Alan Horn took over at Disney in 2012, relations between the studio and the Travers estate had thawed considerably. They were cordial enough, for instance, for Saving Mr. Banks to get made with full estate approval. Not long after that, in 2015, the idea for a new Poppins movie came up again during a lunch at the Disney commissary with president of production Sean Bailey, Marshall and producers John DeLuca and Marc Platt — but this time, with the Travers estate cooperating, the sequel took off like a kite. “Rob was finishing up Into the Woods for Disney, and we were talking about wanting him to do another picture at the studio, and the conversation naturally went to, ‘What about Mary Poppins?’ ” recalls Bailey. “We all felt we’d have to be really careful about it. I mean, who could you even cast? But we were all pretty excited.” 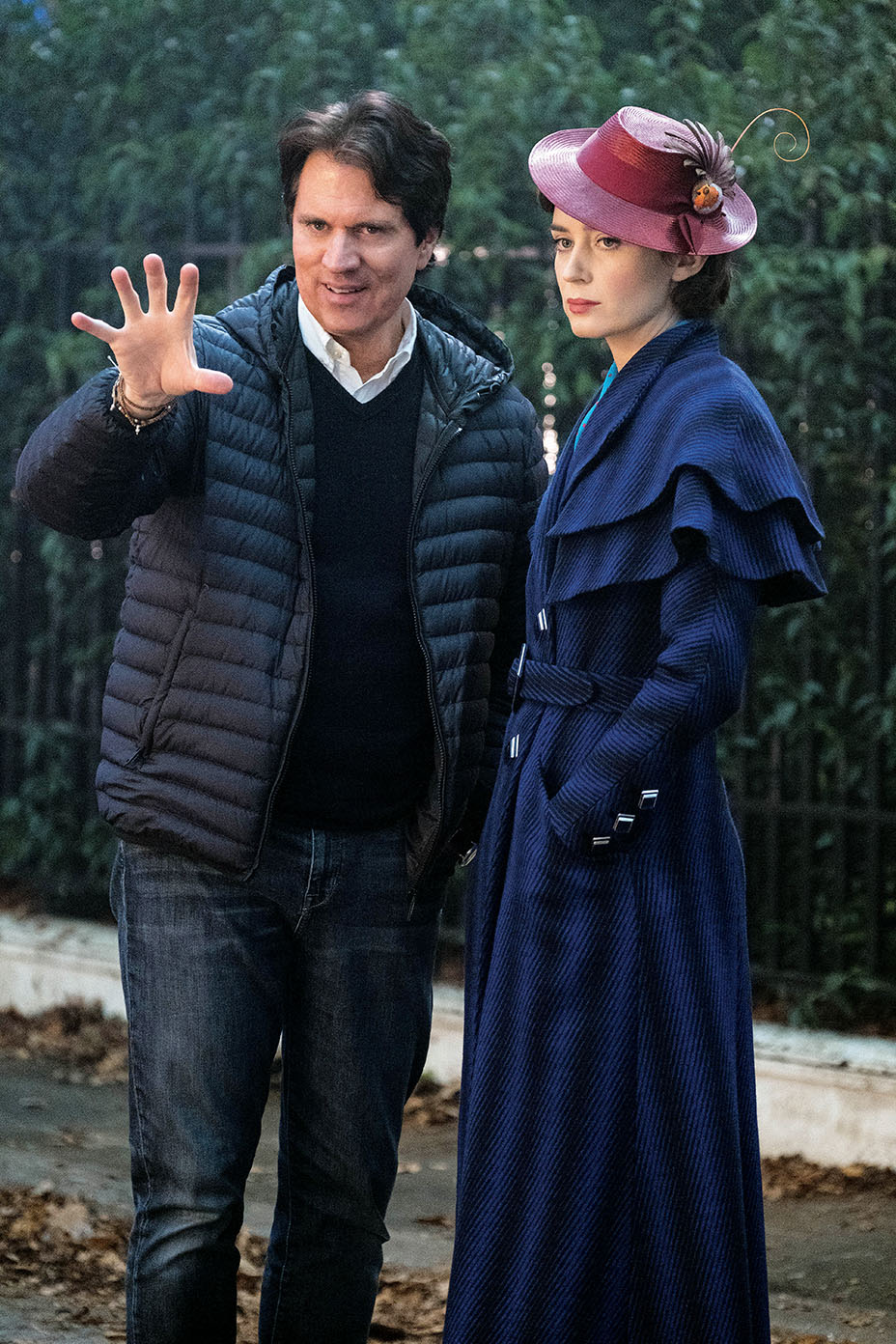 For Marshall, director of movie musicals including the Oscar-winning Chicago, the only thing more terrifying than making a Poppins sequel was the idea that somebody else might make it. “It was the first film I saw as a child,” he says. “I have a deep love for Mary Poppins. So when they came to me, I felt kind of protective of it. But I knew they were going to do it anyway, so I wanted to make sure I was a part of it.

Casting wasn’t so difficult after all, at least not for Marshall. “If I hadn’t just worked with Emily on Into the Woods, there would have been an enormous search,” says the director. “But there was no choice. I knew what this character needed, and Emily checked off every single box.” Also, he notes, “she’s just incredibly British.” Their star in place, Marshall and DeLuca hired David Magee, the screenwriter of Life of Pi and Finding Neverland, as well as the songwriting team Marc Shaiman and Scott Wittman, who’d done the Broadway musical Hairspray, and put them together in a New York City hotel room to hash out a storyline and some music.

“For a couple of months, we’d meet twice a week for three-hour slots and just talk,” says Magee. “I’d make notes of what the story might look like, Marc and Scott suggested where songs might go, while Rob and John developed visual ideas.” Sometimes Blunt would pop in to add her two cents. “She was shooting Girl on the Train,” recalls Wittman, “so she’d spend a day playing a blackout drunk and then come over to the hotel to talk about Mary Poppins.” 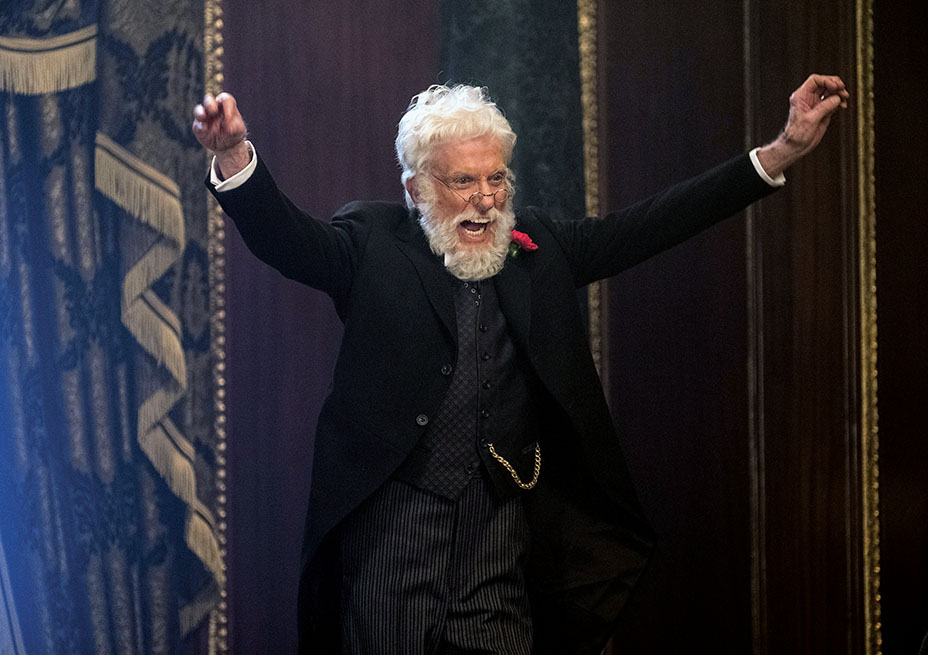 None of the group knew much about Kaplan and Katzenberg’s discussions with Travers, though, coincidentally, their first concept was a sequel set a year after the original movie. “But it became kind of confusing,” says Magee. “If Poppins did such a good job helping George in the first movie, why does she suddenly need to come back? Then one day it hit us: What if it’s not about George? What if it’s about his grown-up children?”

The story they came up with wasn’t too dissimilar from the one Katzenberg and Kaplan had pitched Travers, fast-forwarding the plot line to Depression-era London, where the adult Banks kids, Michael and Jane, are in such financial straits that they’re about to lose the beloved family home on Cherry Tree Lane. After filling out the rest of the cast — Lin-Manuel Miranda, white-hot off his Hamilton triumph, in a Bert-the-chimney-sweep-like role as a London lamplighter; Meryl Streep playing cousin Topsy, a female (and even loopier) version of crazy Uncle Albert; Ben Whishaw and Emily Mortimer as Michael and Jane; and 92-year-old Dick Van Dyke in the small (but energetic) part of the elderly son of the elderly banker he played in the 1964 film — two months of rehearsals began in London in fall 2016.

Blunt spent a big chunk of that time working on a proper Mary Poppins voice. “I’d sort of walk around the house and tried out different things, just experimenting,” she says. “I don’t know quite how I arrived at it, but it ended up a sort of combination of Princess Margaret and Rosalind Russell in His Girl Friday.”

While the actors learned the lyrics and dance steps — “defying gravity with a grin on your face,” is how Miranda describes his approach to the film’s musical numbers — Marshall searched for animators to craft the old-school, hand-drawn fantasy sequence at the center of the film, when Poppins takes Michael’s young children into a cartoon world inside an antique Royal Doulton china bowl. Those animators turned out to be an endangered species. “Honestly, finding 2D animators was one of the most challenging things I’ve ever done,” says Marshall. “A lot of them had to come out of retirement to do the movie. It’s just so not done anymore.” Meanwhile, production crews got to work building sets for the five-month shoot at Shepperton Studios outside London, including a replica of the Banks home on Cherry Tree Lane. “I knew that if there weren’t stairs right there in the hallway and the living room wasn’t to the left, I would feel this isn’t the house,” says Marshall. “Same thing with Cherry Tree Lane. I didn’t want it to be just a straight street. I wanted it curved, like in the original.”

Another set they built was that replica of Big Ben where Blunt had her aerial meltdown. Although there’s some CGI in the film (like a bathtub sequence involving dolphins), Marshall demanded that many of the key elements of the scene (like Mary Poppins flying) be done the old-fashioned way, with harnesses and wires.

“There was a fair bit of dangling, yes,” Blunt says of the airborne scenes. “Rob would blare music from the speakers so that it could be quite moving, but all the time I was in the air, holding up that umbrella, making it look so effortless and even enjoyable — I was having a panic attack.”