When Martin Scorsese wants to push five 1960s-era yellow taxis into New York Harbor at a precise angle and tempo in the middle of the night during winter — with a camera shooting from a crane above him, stunt divers deployed in the water, and Robert De Niro and Bo Dietl in place among a crew of 150 on the ground in Red Hook, Brooklyn — it’s Emma Tillinger Koskoff’s job to say, “OK, Marty.”

Koskoff, 47, is Scorsese’s producer and, because her boss likes to sleep in his own Upper East Side bed during production, she is especially adept at the peculiarities of shooting in New York City. This fall, two NYC-shot films that Koskoff produced will arrive in theaters: Scorsese’s The Irishman, for Netflix, and Todd Phillips’ Joker, for Warner Bros.

“Shooting in New York is always a pain in the ass,” says Rick Yorn, the manager/producer who hired Koskoff to be his assistant during the mid-1990s. “But it’s Emma’s city. She knows everybody. She’s the MVP.”

Koskoff has been shooting in New York for the better part of 20 years. Projects with Scorsese include The Departed, The Wolf of Wall Street and his two HBO series, Vinyl and Boardwalk Empire. The 108-day Irishman shoot drew on all of her skills, not to mention her deep New York Rolodex.

Based on the 2004 Charles Brandt book I Heard You Paint Houses, The Irishman stars De Niro as Frank “The Irishman” Sheeran, a labor union official who says he was involved in the murder of Jimmy Hoffa (Al Pacino). Shot between September 2017 and March 2018, The Irishman features 117 locations and 319 scenes, including one that was filmed at the Bronx courthouse amid the dumping snow and freezing temperatures of a bomb cyclone; it shot in all four other boroughs, plus Westchester and Rockland counties. Because the film covers a five-decade period (from the 1950s through the early 2000s), Scorsese is digitally de-aging much of his principal cast, which meant that the crew often was shooting with a bulky, ILM-designed rig nicknamed the “three-headed monster.” Koskoff estimates the movie was shot 70 percent digitally, and 30 percent on film for scenes where de-aging isn’t necessary. She declines to disclose the budget for the film, which is believed to be Scorsese’s most expensive at well over $140 million, with a 30 percent tax incentive for shooting in New York.

“Trust is what you need to have with your producer,” Scorsese says. “Emma tackles tough problems with me on and off-set. We’ve made films all around the world together — from London to Taipei and Boston to New York. New York is an especially complicated place to shoot, and The Irishman, with its many locations, large cast and VFX, was particularly complex. But Emma had control over all the complexities of the day-to-day physical production. This let me focus on my work with the actors and the rest of my team.”

New York primarily doubles for Philadelphia in the film, with the historic row house neighborhood of Ridgewood, Queens, supplying many key locations, including the Friendly Lounge (a Philadelphia bar where the characters hang out), a church and a Catholic school. The Irishman crew also built sets inside the Marcy Avenue Armory in Brooklyn — including the homes of De Niro’s and Pacino’s characters — and at the Kaufman Astoria studios in Queens; road-trip scenes were shot on a stretch of highway on Staten Island.

Filming in New York, Koskoff says, means learning to yield in a city where your production is never the most important thing going on. Aggressive paparazzi mean it’s common to see images of your day’s work pop up online before the crew has broken down for the day. “Unlike L.A., which is really a one-industry town, New York is not, right?” says Koskoff. “It’s finance. It’s real estate. It’s theater. So you have to find a way to fit into that ecosystem. What parade is happening on the day you want to shoot? The U.N. General Assembly, that gets in our way every time with road closures and traffic. The MTA is extremely challenging — no fault of their own, but they have train repairs, track repairs. Look, it’s arduous, but it’s worth it.” 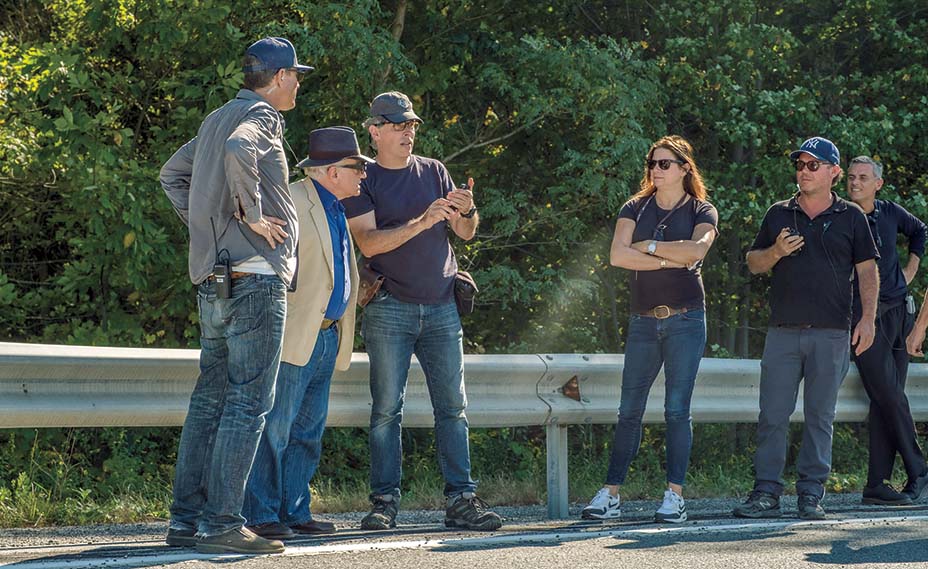 Koskoff grew up in Roxbury, Connecticut, the daughter of actress Dorothy Lyman and theater director John Tillinger. After attending boarding school in Ojai, California, she opted to go to work. “I knew I wanted to do something in entertainment, and I knew that college was not the right move for me,” Koskoff says. “It was like, ‘Let’s just get on with it.’ ” At 19, she got a job as a production assistant on the set of Louis Malle’s Damage thanks to her stepfather, who was Malle’s younger brother and producer; next she went on to work for talent agents Mary Sames and Diana Rollnick in New York, absorbing their rigorous work ethic. After a stint as Uma Thurman’s assistant, and then Yorn’s, she ended up as an assistant to filmmaker Ted Demme and was on a track to become his producer until his sudden death at 38 in 2002.

Yorn, who also manages Leonardo DiCaprio, introduced Koskoff to Scorsese, and she began working for him on 2004’s The Aviator. “Marty considers her his right hand on set,” Yorn says. “He couldn’t get it done without her. She’s one of the greatest nuts-and-bolts, physical, old-school producers in the business.” On set, Koskoff is usually the person huddled next to Scorsese at his monitor, wearing a beanie, T-shirt and jeans. On the January night that he was capturing the sinking taxis shot for The Irishman, she performed her producerial duties wearing her full ski suit to guard against the bone-chilling temperatures. Koskoff brings a camp counselor’s elan to caring for her crews — she’s a big believer in the healing power of food trucks, particularly a kimchi taco truck, and good crew gifts, with hoodies a top draw. Her favorite New York-shot scene, she says, is DiCaprio’s quaalude sequence in Wolf of Wall Street, filmed at the Westchester Country Club in Rye: “Some of it was very specifically choreographed, but his crawl to the car was him doing his thing. You’re literally like, ‘What are we watching right now?’ ” She keeps a bottle of wine or two in her production trailer, for decompressing at the end of a shooting day. She and her husband, producer Nick Koskoff, have two children, ages 8 and 15, and live in Battery Park City.

Joker, based on the DC Comics character, is the first time Koskoff has produced for a filmmaker who wasn’t Scorsese. From a screenplay Phillips wrote with Scott Silver, Joker stars Joaquin Phoenix as a failed comedian who becomes the titular criminal mastermind. The film has some thematic and visual ties to Scorsese’s oeuvre, particularly Taxi Driver and his 1982 black comedy King of Comedy, which starred De Niro as a deranged aspiring stand-up. Phillips’ initial intention was to have Scorsese serve as producer, and Koskoff came with the package — Scorsese ultimately bowed out, but Koskoff remained.

Shot over 59 days in the fall, Joker sees New York standing in for Gotham, including a violent protest filmed at a subway station in Brooklyn. Phillips’ crew also built sets inside Steiner Studios at the Brooklyn Navy Yard. There was one element New York City couldn’t provide, however, and that was its own historically gritty look. In a climactic riot sequence, Phillips wanted the feeling of late-’70s Times Square. For that effect, Koskoff ultimately ended up taking him to Newark.

The “queen of the MTA,” Jones helped coordinate shooting in a Brooklyn subway station for Joker. “You can’t do anything without Ruthie,” says Koskoff.

New York is the only major city with a dedicated police unit for film and TV production.

“Old-school New York, Richard can get crews to do things for him that they won’t do for anyone else.”

Overseeing the budget and scheduling, Raij is “the best that New York has to offer.”