Mahershala Ali, just a few months ago, was all but unknown outside a small coterie in the entertainment industry. Despite more than a decade of solid credits in movies like The Hunger Games and such Netflix series as House of Cards and Luke Cage, the actor kept a low, paparazzi-less profile.

That all changed with Moonlight, the low-budget drama about an African-American boy’s odyssey to manhood, which became a sensation in August at the Telluride Film Festival and is nominated for eight Oscars. Playing the kindly drug dealer Juan, Ali drew notice as the film’s breakout star (and further kudos in another best picture nominee, Hidden Figures), earning himself an Oscar nomination and winning a Screen Actors Guild Award for best supporting actor.

It was at the SAG Awards on Jan. 29 that audiences learned much more about Ali as he made a resonant plea for tolerance in the face of President Trump’s proposed ban on travel from seven Muslim countries. “What I’ve learned from working on Moonlight is, we see what happens when we persecute people: They fold into themselves,” he said. “When we get caught up in the minutiae and the details that make us all different … there’s an opportunity to go to war about it and say, ‘That person is different from me. I don’t like you. So let’s battle.’ “ 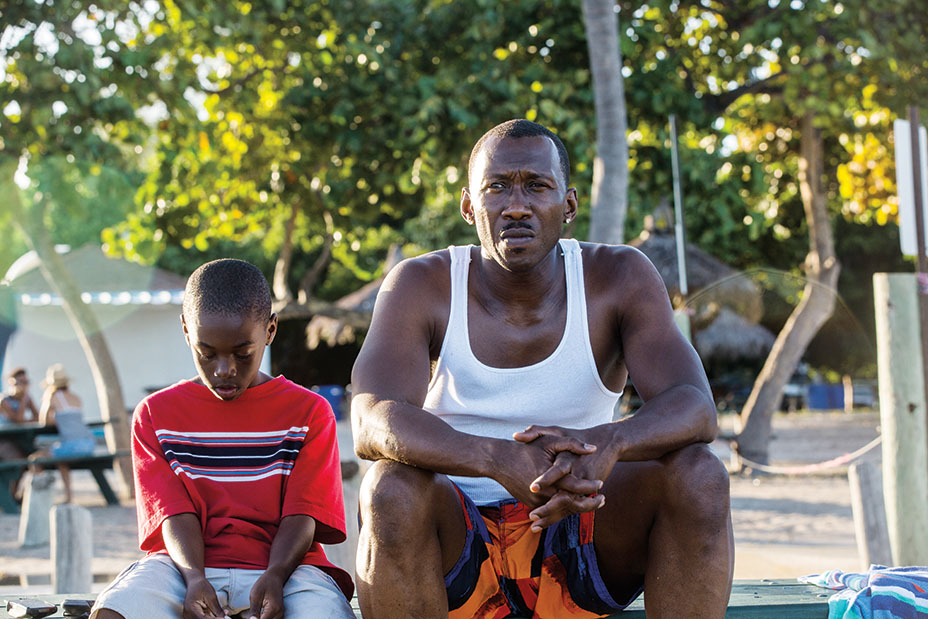 He added, “My mother is an ordained minister. I’m a Muslim. She didn’t do backflips when I called her to tell her I converted 17 years ago. But I tell you now, we put things to the side and I’m able to see her, she’s able to see me, we love each other, the love has grown.”

Sitting with The Hollywood Reporter for an extensive interview in Santa Barbara a week after his speech, Ali, who turns 43 on Feb. 16, spoke about his mother and his own path toward manhood. “I would love to not talk about Trump; I don’t have anything positive to say about him at all,” he says, going into detail for the first time about his past, as he and his wife, artist and music producer Amatus-Sami Karim-Ali, anticipate the imminent arrival of their first child. “I’m even excited about being tired,” he says.

The Venice, Calif., resident admits he’s still coming to terms with being in the public eye. “I’m used to answering questions about what it’s like to work with Jennifer Lawrence,” he jokes, flashing a rare smile. That smile doesn’t mask his fundamental seriousness. “He’s extremely, extremely soulful,” says Barry Jenkins, director of Moonlight (whose distributor, A24, counts as an investor the owner of THR)

Here, in his own words, Ali reveals his personal journey from childhood upheaval through near-depression, discovery, religious conversion and finally contentment in his life and career. 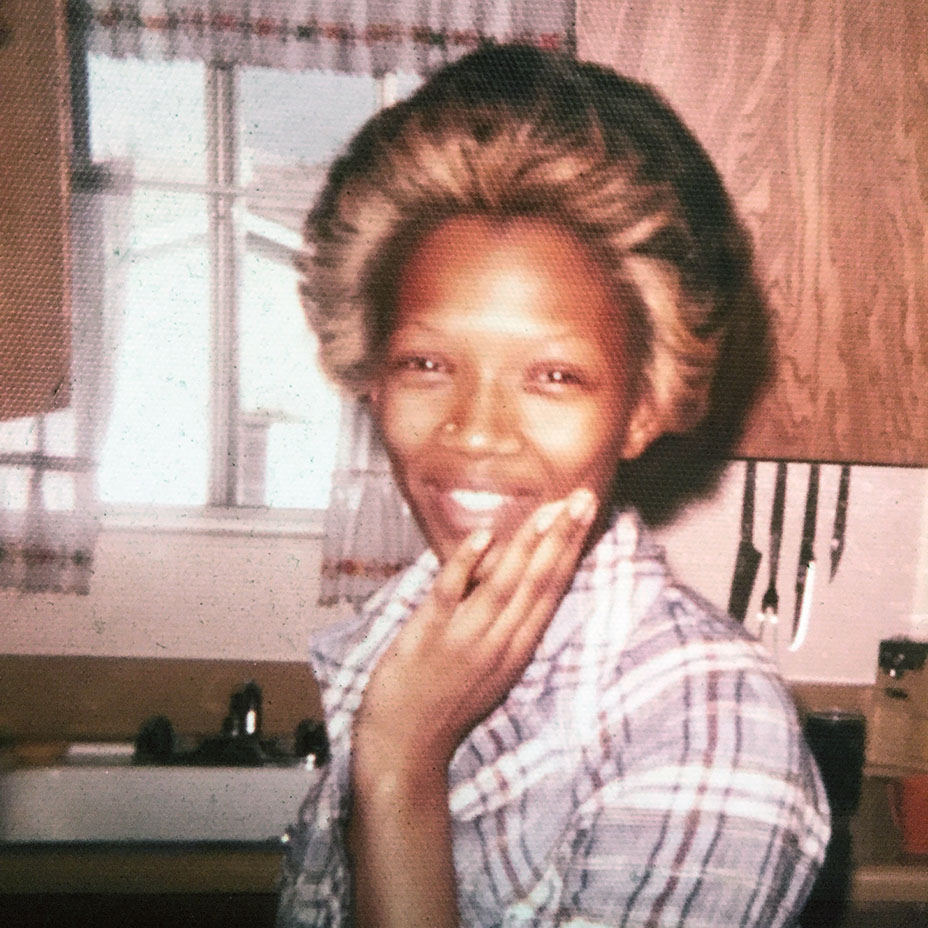 My birth name is Mahershalalhashbaz Gilmore. In the Bible, that’s the name of the prophet Isaiah’s second son. He was instructed to write the name in capital letters on a rock, and it means “divine restoration” or “speedy to the spoils.” My mom, Willicia, had a dream about it and felt very strongly it should be my name.

I was born Feb. 16, 1974, in Oakland, Calif., I grew up 5 miles from Oakland, in Hayward, and they’re different. Hayward was safer — it was working-class, blue-collar, but you had a bit more peace.

My grandmother, Evie Goines, was an ordained minister in Hayward Baptist Church. She was the assistant pastor until she died, and [years later] my mother became an ordained minister, too. I grew up in a prayerful home; I never remember not praying — I prayed every day of my life, and that was instilled in me as a kid, and as I’ve gotten older, that’s just matured in me. 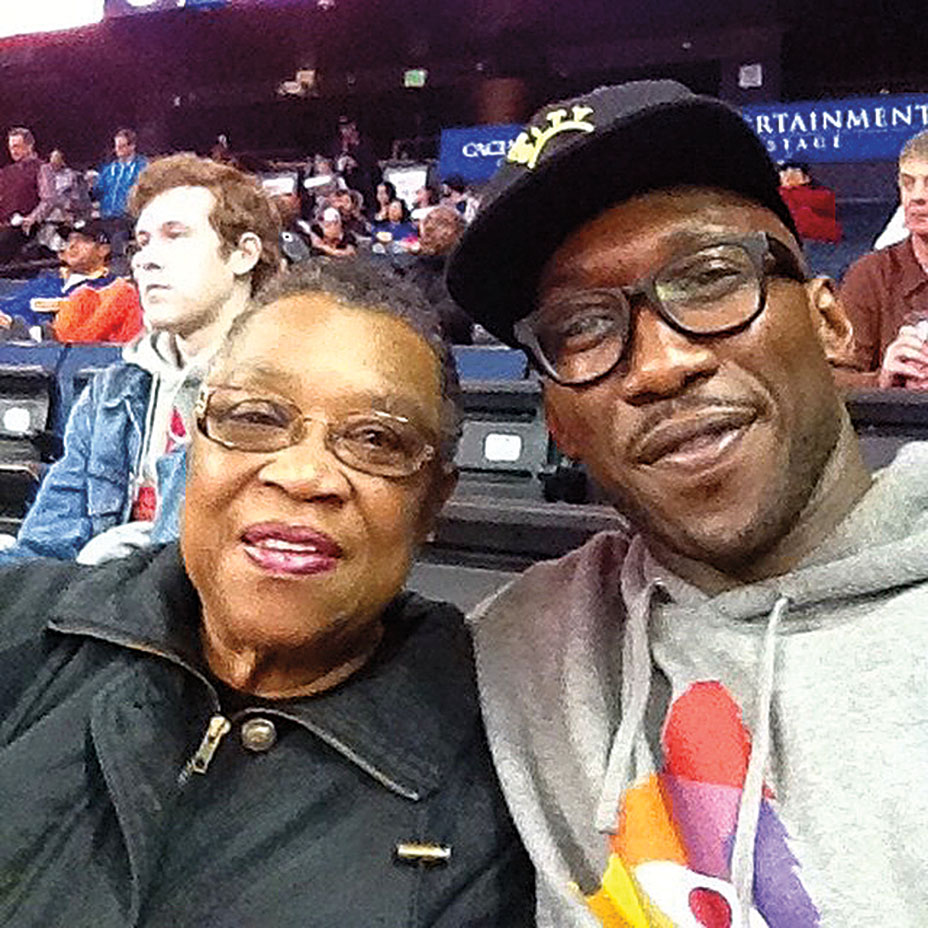 My parents were in high school when I was born. My mom was 16, my dad was 17. They were kids, at the very beginning of coming into their own and finding themselves.

My father, Phillip Gilmore, was very talented. He was getting seriously into dancing. He was on Soul Train and won $2,500. But the Bay Area was too small for him. I don’t think he had the space to do what he needed to do. He went off to New York and got into the Dance Theatre of Harlem and immediately started working and traveling with the companies of the larger shows. They split when I was 3. I remember clearly my mom’s reaction, one of the first things that felt traumatic in my life. She was leaning on the dresser, crying, and I said, “Mommy?” I asked her what was wrong. She told me that my dad had left, and I started crying. Just seeing her, I understood the weight of what was happening. She said, “He’s gone. Your father’s gone.”

‘THAT WAS THE TRIGGER FOR ME: WHEN I FELT ACTING WAS THE ONLY THING I COULD DO’

I won a basketball scholarship to Saint Mary’s College in 1992, and then I found acting. I had a professor there, Rebecca Engle, and she approached me about doing Othello. That scared me, but it let me know what she thought of me. I ended up doing a different play, Spunk, which my father had taken me to see. It was standing-room only, standing ovations every time we did that play. It was borderline revolutionary for us to do a black play in a college that was 90-some-odd percent white, and here’s this white woman who was a Berkeley hippie, embracing of all people, whatever their walk of life.

That was the trigger for me: when I felt that was the only thing I could do, and if I did anything else I wouldn’t be on track. It was therapeutic to get down to the seeds of other people’s dysfunction, with the goal to crack it open and shed light on it. That’s what led me to graduate school [at NYU] and to follow acting, like my father. 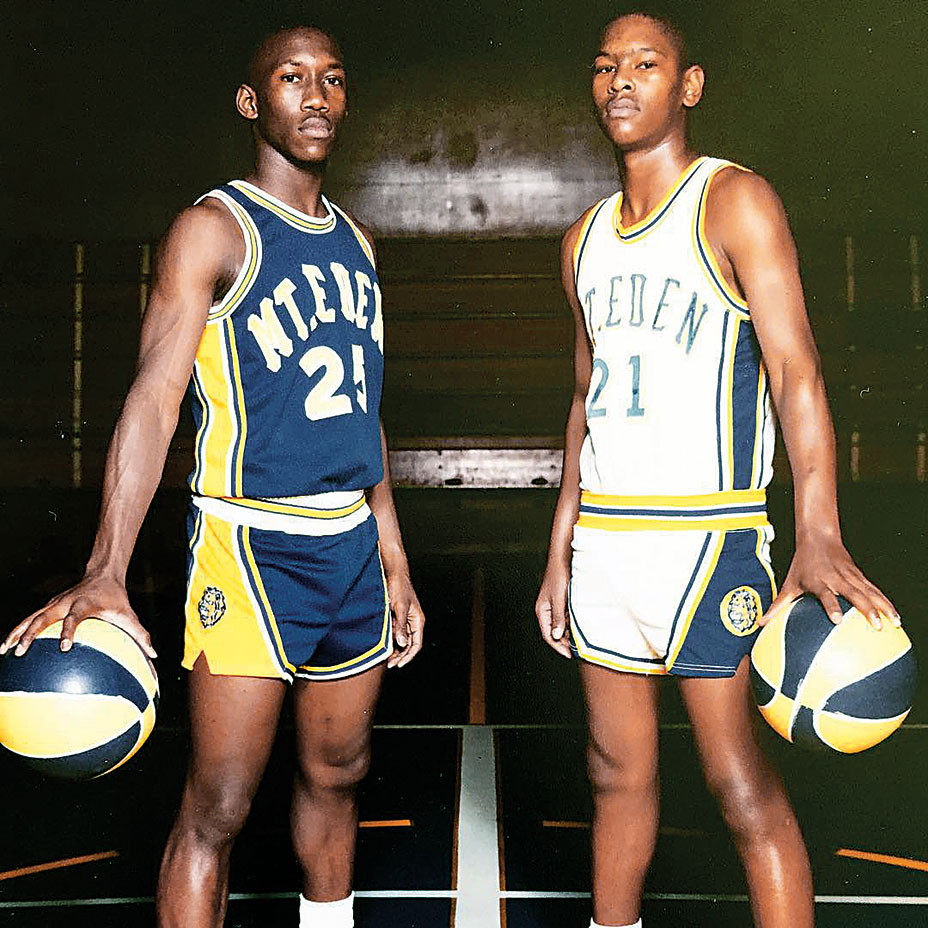 My father died in 1994, when I was 20. He passed after a long illness. I remember waking up in California, and I got up and spoke to one of my dad’s best friends on the phone. I called her and said, “Have you heard anything about my dad?” And she said, “Oh, you haven’t heard yet?” And she said, “Yeah, yeah, baby, he passed away.” I got off the phone, and I made a prayer and asked God, “Help me not mourn right now,” because I felt that would make it much harder on my grandparents. I needed to be strong. But after my father died, I felt defeated.

When I moved to New York, that’s when his death really struck me. I was where he lived, I was in his town. I finally had something that he could deeply connect with, where there would have been a real sense of pride, and he never, ever saw me act.

When I was around 13, I’d started asking him questions specific to Christianity. I was going to these church camps as a kid. I was in New York, visiting him, and I wanted to know what he believed. And he stopped me and made it clear that he didn’t believe that Jesus was God, and that there was a difference, that God was God. He was agnostic and really embracing of other faiths.

Then at a certain point in grad school, being in that city and exposed to all these different ideas made me start questioning what I believed. 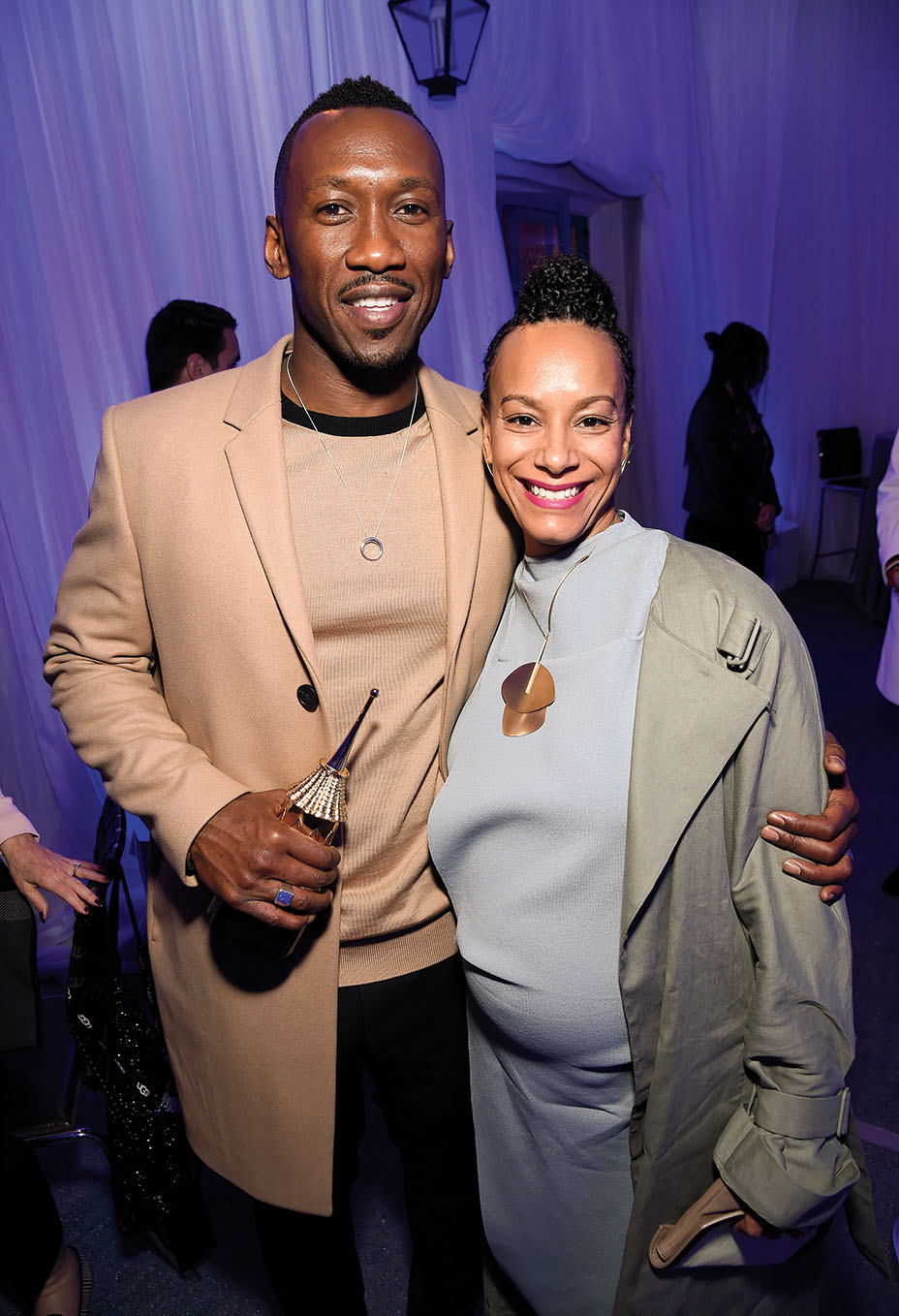 I was around 23 or 24 years old when I couldn’t ignore it anymore. I was going back in time and trying to find out why I believed what I believed, and it always ended with my mother, and with what I was told — not my own epiphany or studies.

I started reading a few books on everything from reincarnation — The Seat of the Soul by Gary Zukav — to As a Man Thinketh [by James Allen], to The Prophet by Kahlil Gibran. I was taking in information that was beyond the canon of literature that I had been exposed to, to really take some ownership of my spiritual beliefs.

When I was in grad school, I met Amatus, who later became my wife, though there was a [period of 12 years] when we weren’t really in contact. She’s artistic, extraordinarily independent, very straightforward, very intelligent, kind. She’s really high-functioning — morally, ethically and socially.

She was in undergrad, studying acting at NYU’s Experimental Theatre Wing. She was coming to terms with whether she even wanted to be Muslim, because her father is an imam. And I was looking for my anchor or the thing to bring structure to my spiritual walk. She was almost coming out of it, and I was going into it.

So I went with her and her mother to the mosque in Philadelphia. I remember watching the imam give the khutbah, or sermon, and then we’re making the congregational prayer. And I started crying. I didn’t quite understand why I was crying, because the prayer was in Arabic and I couldn’t understand Arabic. And I’m just crying in a way that I hadn’t quite experienced before.

A week later, it was Christmas break for school, and I just happened to stay in New York. It was Dec. 31, 1999. I woke up and thought, “I have to go to the mosque,” and I go to this mosque in Brooklyn, and it’s packed. It’s multiple stories, and I’m all the way in the back, and they do this sermon in English and in Arabic, and they go to make the prayer — “In the name of God the gracious and the merciful. All praise is due to God alone” — and the same thing happens to me, and I just start crying. I couldn’t wrap my head around it. It was beyond explanation. There was this connection that pierced through it all for me. And I felt like I was in the right place. And this guy touches me on the shoulder and says, “Are you Muslim?” And I say, “No.” And he goes, “Do you want to be?” And I said, “Yes.” So he took me up to the imam, and I made my pledge.

When I told my mother, it was a little bit clumsy. I got on the phone and she wasn’t excited about that, in large part because at that time she believed there’s only one route to heaven, through Christianity. It probably took 10 or 12 years until she really embraced it. My mother is as spiritual as she is religious. She likes to have a good time, but she has an extraordinarily serious quality about her. She lives with the awareness that we are spiritual beings having a physical experience, that everything is about the next life. She basically told me she accepted that was my path, and she’s been really supportive of that choice. We are in an extraordinarily positive place today. 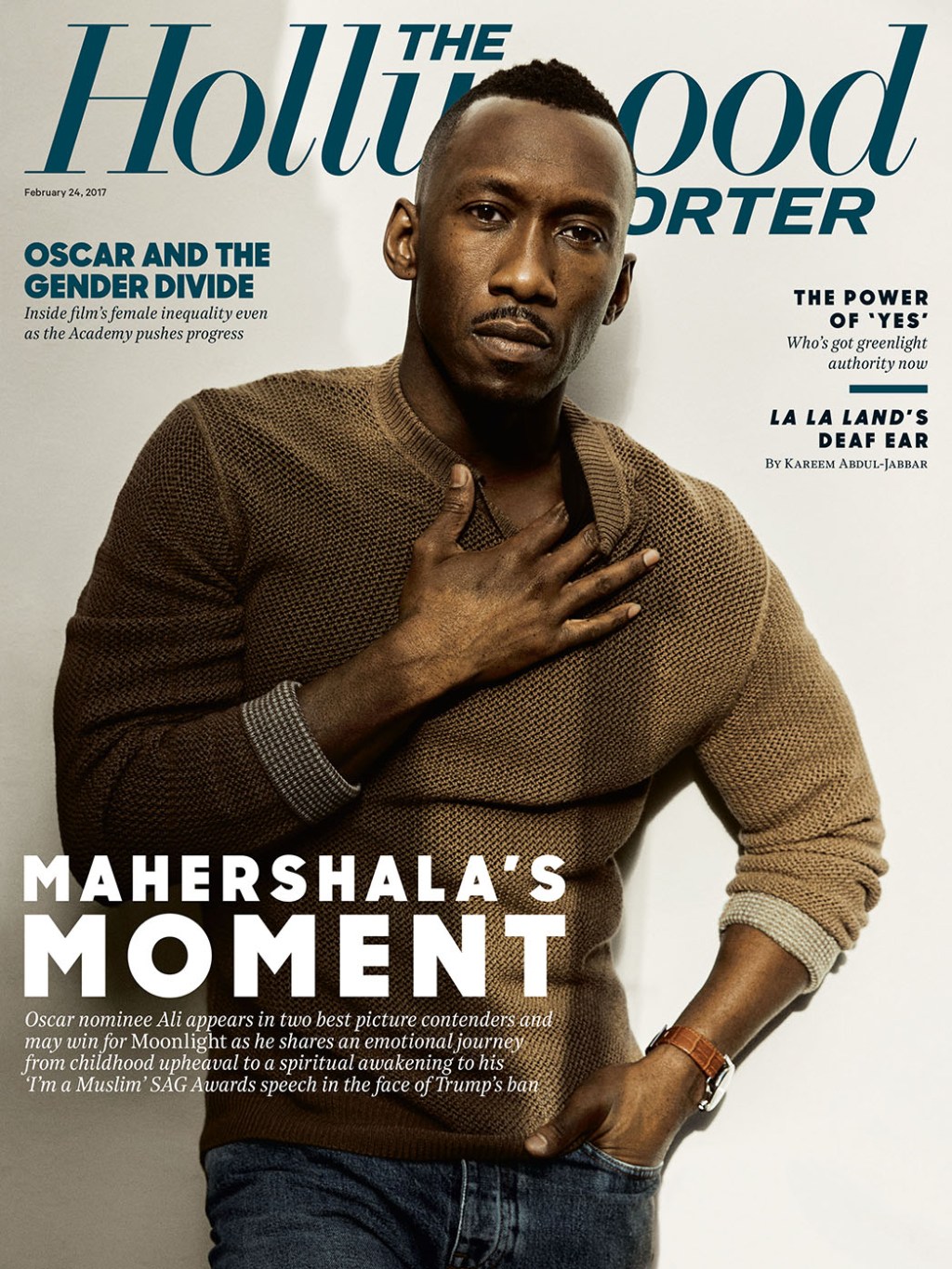