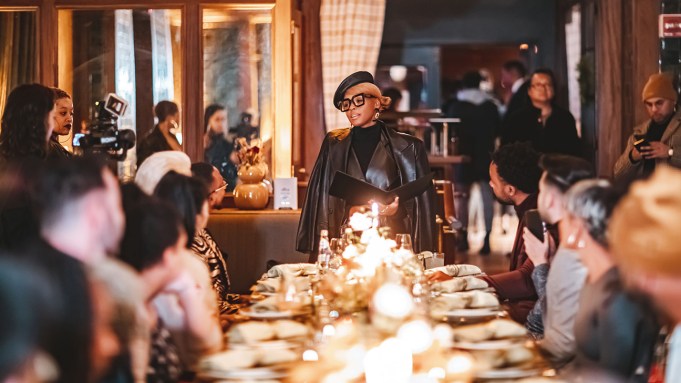 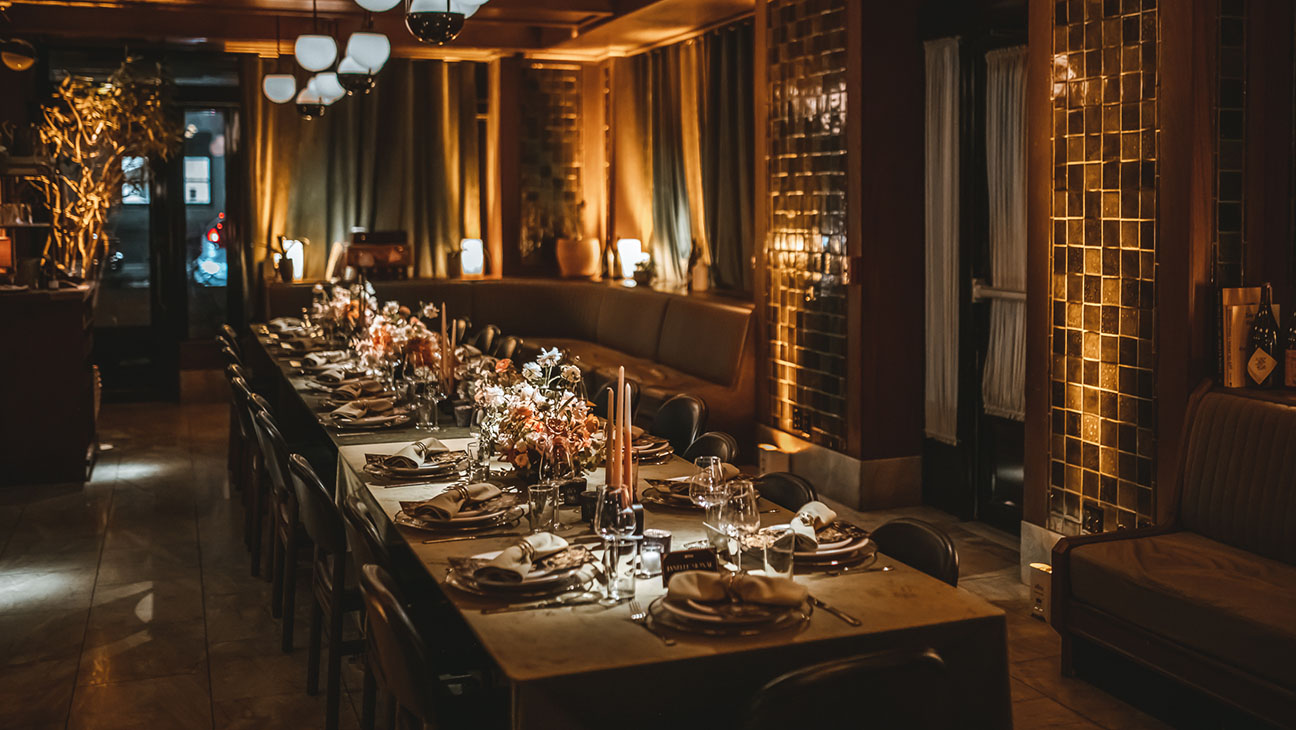 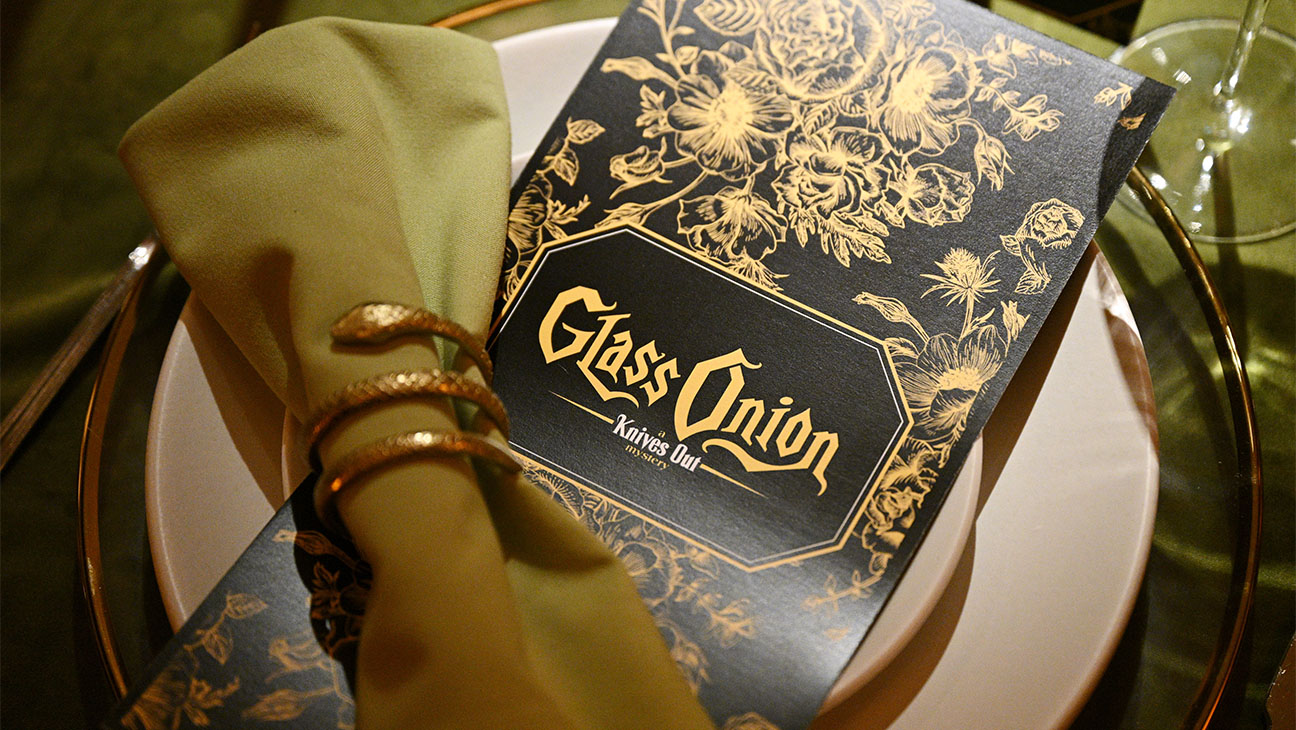 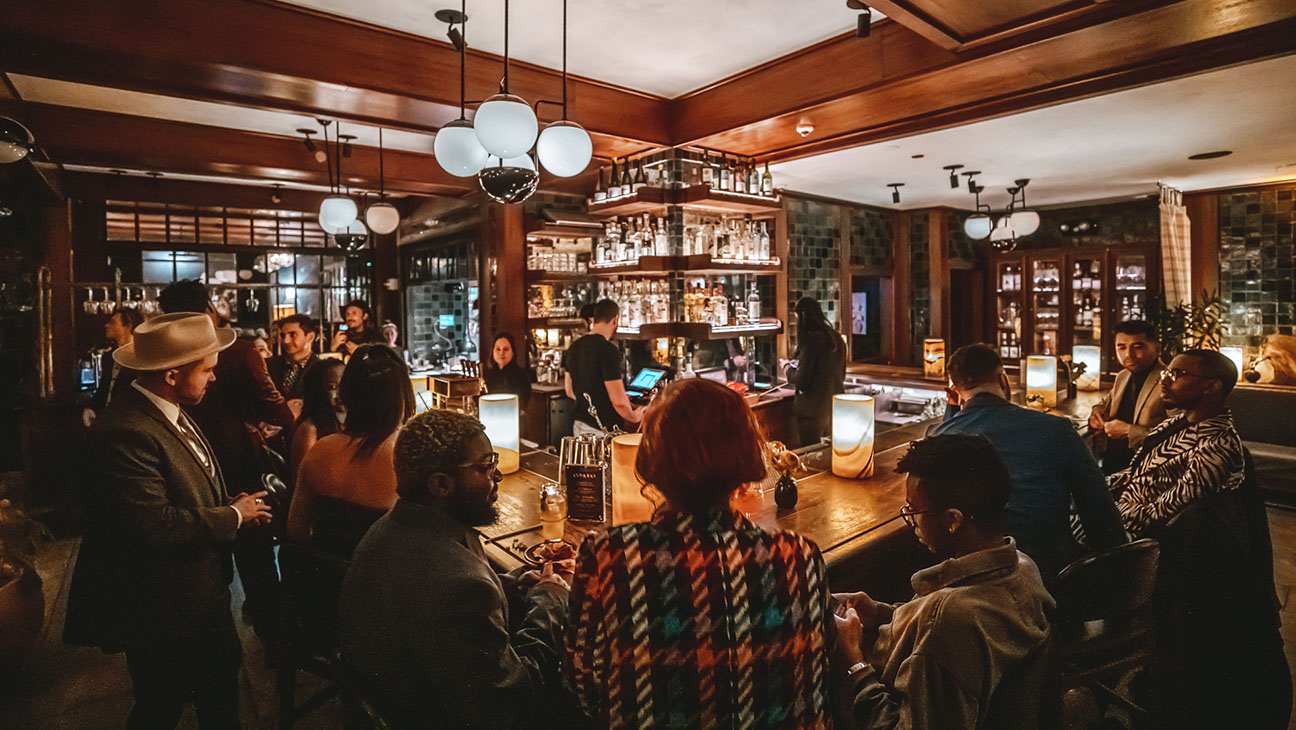 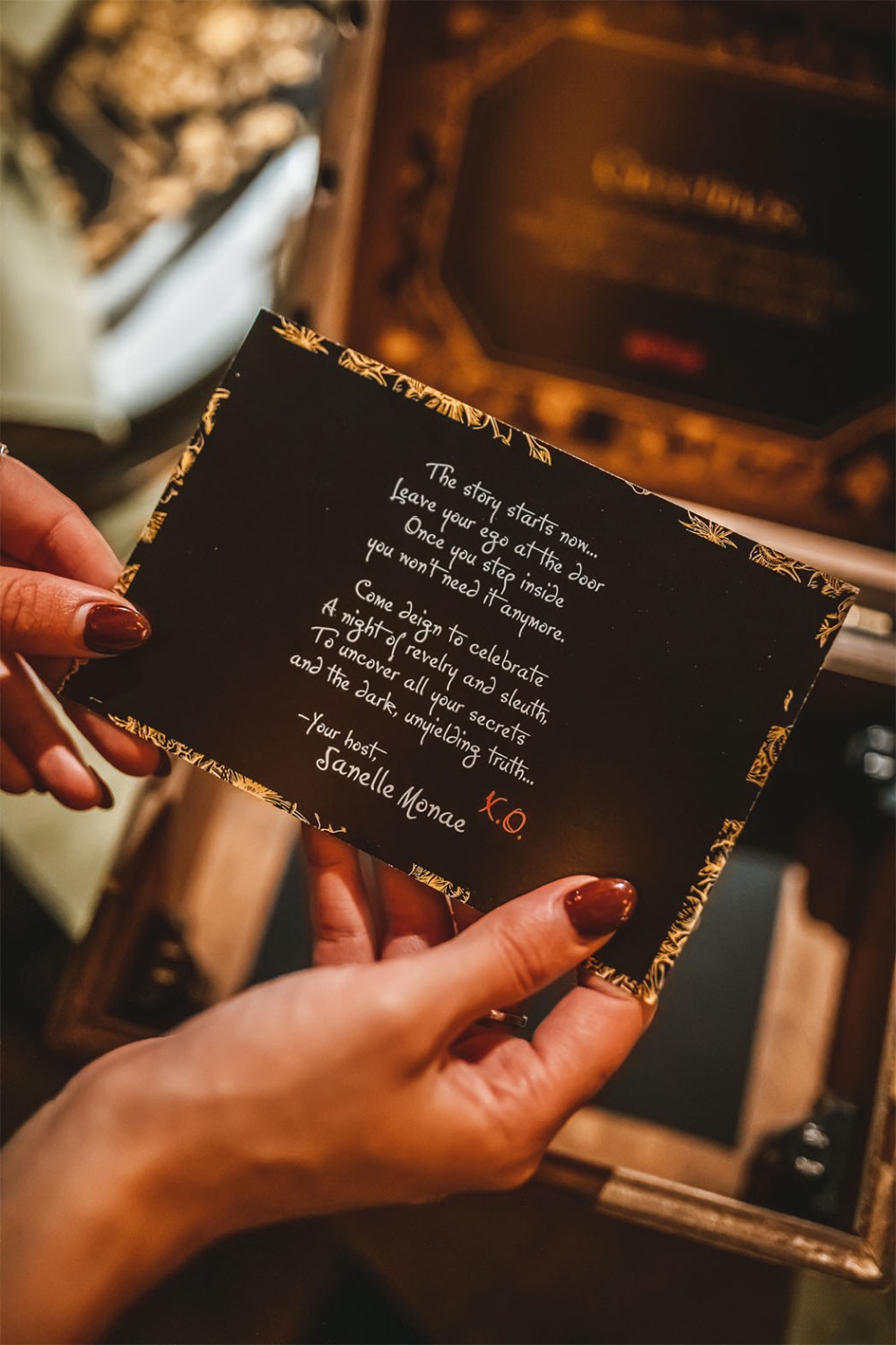 If revenge is a dish best served cold, murder is a meal best served over a squabble between impeccably dressed murder suspects during an evening that ends in an exploding suitcase of fake $2,000 bills.

At least, that’s what happened during Glass Onion‘s special murder mystery dinners held in December to celebrate Rian Johnson’s latest installment in the Knives Out universe. Ahead of the movie’s streaming release on Dec. 23, Netflix hosted a series of immersive whodunnit dinners — driven by star Janelle Monáe’s love for the medium — that saw some of the movie’s own talent putting on a different kind of performance among friends and fans.

Rob Lowe and His Son Discuss Taking Father-Son Dynamics to the Small Screen in 'Unstable': "Not a Whole Lot of Acting"

'That '90s Show' Renewed at Netflix

Coming across three coasts for three separate nights, the series of events in Los Angeles, Atlanta and New York welcomed a mix of media, cultural influencers and entertainment industry members, with an emphasis on Monáe’s fellow Black and LGBTQ+ community members. Each city’s group was privy to deception and deliciously good fun courtesy of murder mystery collective JFI Productions and, in New York, marketing agency NVE Experience, which helped secure the night’s performers, space and design, and food and drink menu.

As part of the evening, invitees were tasked with unmasking a murderer while sipping on custom cocktails and enjoying a multi-course menu. Among the night’s libations were the Cuban Breeze (vodka, pineapple and amaretto), The Death of the Party (a whiskey soda), Edge of Paradise (spritz with mezcal, cachaca, italicus, campari, spiced pear, ginger and citrus) and The Buttress (fernet, cocoa, cold brew liqueur, creme de menthe). In New York, Cómodo was behind the evening’s plates, a little gem salad and pork belly area for the first course, followed by charred cauliflower, rainbow carrots, achiote chicken, pecorino and autumn vegetable fusilli. Dessert, taken at the bar, was chocolate churros.

While Atlanta counted director Rian Johnson among its guests, Los Angeles was also privy to an added experience — the Glass Onion-themed escape room — which encouraged fans to find their inner Detective Benoit Blanc (Daniel Craig’s character in both films). Monáe and star Kate Hudson were both onsite for this tastemakers event, where they surprised those inside the experience.

As part of the event, the evening’s guests received a puzzling invitation — a pared-down version of those intricate invites sent to Miles Bron’s (Edward Norton) inner circle at the beginning of Glass Onion. Complete with a note featuring the very same affection (“My dear friends, my beautiful disruptors, my closest inner circle”), the box’s actual invite required completing several steps, beginning with a puzzle featuring the movie’s logo. Once completed, one could press upon its four edges, and after a literal “pop,” could remove it to uncover what was tucked further within.

Inside awaited the invitation, along with another puzzle-riddle that required the removal of a pin from the wooden box’s edge to unlock a hidden drawer. That unearthed a possession of the murdered person and something to be brought to the exact location and time of the dinner. (Items given to guests included a pocket square, pearl necklace, earrings and cuff links.)

Upon entering Cómodo, I was greeted by several tall men in black suits who flanked an eager-eyed, red-headed woman. After announcing my intention to attend the Glass Onion dinner, this woman — a (presumed) member of the wait staff — snapped into character, taking my arm and leading me into another room where a funeral guestbook sat squarely in the middle of a table. With sad eyes she attempted to console me on the “tragic” loss of Mr. Javier — the victim and reason the night’s guests had gathered — while another woman, dressed in purple, engaged in a tense (scripted) phone conversation in a corner of the room. After quickly writing up a faux message of concern — she led me into the bar area where my coat was taken by (real) wait staff before I was set loose into the world of an interactive murder mystery.

While other “character” introductions throughout the night seemed a little more innocuous — to the point that it was, at least initially, unclear who was and wasn’t a performer — my first interaction was a sudden accost by yet another (though more vibrantly) redheaded woman, Misha. She, who I would later learn was Javier’s accountant, popped up from her place at the bar and immediately began comiserating about the tragic loss of our shared “friend.” Between apologies for not having kept in touch more and questions about my own whereabouts in the days since Javier’s death, it became clear just how much “performance” I and the other invitees were encouraged to dole out across the night.

After slipping away from our brief conversation (in order to prepare for the newly realized demands ahead), I settled in comfortably at a booth in a corner of the restaurant. Joined by guests, we swapped names, pleasantries and the special items we received in our invitations as we munched on appetizers like trout ceviche tostada, wild mushroom al ajillo and carnitas tacos. This was the moment the character interaction ramped up as more guests arrived, with a revolving door of actors — all parts of Javier’s inner circle — taking a seat at our table over the next hour. A bitter assistant, an overambitious brother, a duplicitous ex, a shifty magician and a watchful dinner manager all made their way over to help set up the night’s impending adventure. All character actors refused to drink or eat (the eventual giveaway to who was and wasn’t an actor), and instead insisted on spilling the tea about each other.

These interactions offered a prime opportunity for the real among us to dig for clues. Among them was a business card, which offered a number to Javier’s brother’s phone and led to a freshly recorded voicemail message set almost a little too quickly after Javier’s death. Later, a trick from a magician and Javier’s life coach would tease the night’s illusions (and delusions) among the dinner’s cast. One of those surfaced during a chat with Javier’s girlfriend — the one to find his body and who would tell an increasingly elaborate lie about the nature of their relationship. That’s when Monáe swept in, already in character as Javier’s longtime friend, arbiter of his will and host of the evening.

About an hour in, the group was called to the table, a long stretch of intimately lit seating that intermingled media and influencers with dinner actors. As the wait staff swapped out salads for chicken and pasta — refilling our wine glasses along the way — the unraveling of the night’s various performer-suspects began. But first, Monáe would pay tribute to the “renaissance” man. “I just want to say thank you all so much for showing up for my dear best friend Javie. If you knew Javie, you knew that we were inseparable,” she began before turning to the table and requesting each guest share how they knew and loved Javie. (Some guests shared their real professions, while others supplied more elaborate backstories involving music and business connections — in my case, a “fellow supporter of the magical arts,” who shared Javie’s “intensity and passion for the power of the illusion” and a mastery of “deception.”)

Each new monologue arroused suspicion about not just the murderer’s identity, but who was and wasn’t actually an actor. And those feelings would be heightened thanks to a score that soundtracked the dinner’s dramatic ups and downs — literally on cue. As Monáe led the table into an accounting of Javie’s gifted heirlooms and read his final statement, they revealed the deceased man’s knowledge of his own murder. In response, dinner actors took turns taking more digs at one another from across the table, before eventually moving around to plant even more suspicion amongst the diners. Being situated between two of the night’s more “dramatic” friends — Javier’s assistant Daniel and his girlfriend Jenn — led to being caught in a hilarious verbal altercation. As Jenn took my hand and addressed me directly while detailing an alleged proposal by Javie (which was interpreted through dance by two “wait staff,”) Daniel snapped back with a less-flattering alternative version of the night. But not before taking a beat to pointedly remind me: “I told you I was going to tell the truth.”

At this point, the line between “dinner” and “murder mystery performance” became the most blurred as the night’s explosive dinner sequence came to a head. Despite having full plates in front of us, the table tore through a series of clues designed to help get us closer to identifying the killer. Handwritten notes hidden in the restaurant’s bathroom; blindfolded trips to a room where a phone call awaited; ripped pages featuring poetry from Alfred Lord Tennyson; photos of the crime scene fire; details of Javie’s autopsy; a flight itinerary for his accountant; and late-night text messages exchanged between Javie’s girlfriend and brother made their way around the table. Even Javie’s assistant drew up a mini portrait — amusement park caricature-style — of one of his inner circle, a picture that would later reveal itself as one of the night’s biggest clues about the murderer’s identity.

And as the party inched closer to its (comedically) thunderous climax, several tests were deployed — led by Javier’s life coach-slash-magician, who at one point performed a live fire trick before being confirmed as not the murderer. The first, a murderous version of “Never Have I Ever.” Next, each guest was required to open an envelope, which would contain either a picture of a heart or a skull. Those with an envelope featuring the skull were deemed the night’s final suspects and asked to produce evidence of their whereabouts on Dec. 1 — the night of Javier’s murder.

Unable to produce a cell phone photo with a timestamp, a quick call to my roommate produced a scenario in which we were both watching The Menu and, not long after, suspicion was off me and onto another guest. But amid the chaos, Javie’s rather quiet accountant was seen trying to sneak out with the two suitcases she’d had in her possession all night. She’d be revealed as the killer, her arrest taking place right behind me — but not before her suitcase full of fake money exploded over me while I was eating.