Brett Kavanaugh’s Supreme Court fate is hours from being sealed when television icon Norman Lear gathers with his One Day at a Time showrunners Gloria Calderon Kellett and Mike Royce on a crisp fall morning in Boston.

Having spent a six-decade career infusing political debate into his collection of sitcom classics, from Good Times to All in the Family, the 96-year-old would love to do the same with the ferocious judicial battle gripping the country — just as he would with whatever controversy Donald Trump is stirring up that week. But like so much else about the industry since Lear got his start in the 1950s, the way in which viewers consume content has changed dramatically, as has the way stories are told.

“We can be topical but not timely,” explains Calderon Kellett, 43, of their critically adored Netflix collaboration. While all 13 scripts for the Latinx revival’s forthcoming third season already are written, they won’t be available for viewing until early 2019. “You can’t deal with Kavanaugh,” says Lear with some frustration, “or even talk about Trump because we don’t know between now and February whether he’ll even be president.”

The trio’s wide-ranging conversation extends to the impact of #MeToo, nine-figure overall deals and the benefits (and burden) of adapting the work of a legend. “When we first started, we were definitely like, ‘Are we tarnishing the Norman Lear brand?'” says Calderon Kellett, as Royce, 54, nods in agreement. For Royce, it was the first season’s fifth episode, which focused on immigration, that had him most anxious: “You don’t want to do a pale imitation of what Norman used to do.”

A lot has changed in America since the series was sold, much to the detriment of the U.S. Latinx population. How has the show’s role changed in response to that?

Calderon Kellett The show’s role is still to be honest. Right now, there’s us and Jane the Virgin — so, not a lot of representation for us. I like that this show stands as a positive role model for Latinx people. I’d love to make flawed people with addiction or an antihero kind of role, but we don’t want to put that out first thing.

Norman, as you’ve seen the political and social culture change over the years, how have the stories considered taboo changed?

Lear People tell me you’d never get All in the Family on the air again. By the same token, I see things on where it seems to me all subjects are open now.

Calderon Kellett Well, cable and streaming, certainly. Network is [different]. Norman told us about CBS wanting to do a retrospective of his work and there were episodes he wanted to show that Standards and Practices wouldn’t allow — and it [originally] aired on their network!

Royce I’ve seen those episode recently and there are words and situations that they wouldn’t allow now.

Lear Dealing seriously with abortion. And I did a show called The Powers That Be [in 1992], and they yanked it because the stuff that’s happening on shows right now — the secretary sleeping with the guy who was going to run for the president — was too tough then.

You mentioned abortion. It’s been 46 years since Maude‘s abortion episode … 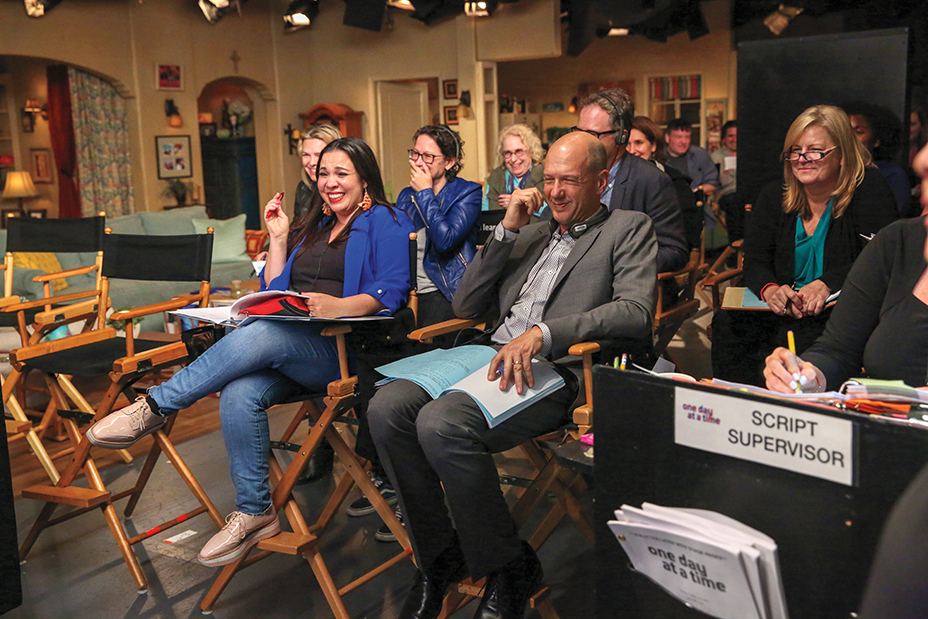 Hollywood's 50 Most Powerful TV Showrunners of 2018

Now, a woman’s right to choose is under threat again. Did you ever think that we’d be here now?

Lear My God, no. I can’t believe how we go forward and back again on this issue. The LGBT issue is the only one that has constantly moved forward.

How do you balance the need to be timely with wanting to make something that doesn’t have an expiration date, especially on Netflix?

Lear That’s the toughest thing they deal with. The shows they just finished won’t go on the air until February. How timely can you be? I find it frustrating. It inhibits what you can deal with.

Calderon Kellett We can’t do a ripped-from-the-head­lines.

Lear It has more to do with the human condition than the headline.

Calderon Kellett The unfortunate thing about women’s rights, immigrant rights and the rights of the LGBTQ community, etc., is that the change is not happening fast enough. We have an episode that deals with #MeToo issues in season three. That was a conversation where we were like, “Is it going to be too late?” And all the women were like, “Uh, we think it’s still going be a problem in 2019, sadly.”

How bizarre is it not knowing how many people are watching the show you’re making?

Lear It’s very strange. We depend on numbers everywhere in America — the whole culture is numbers, numbers, numbers. How many? What percentage? It is really strange! What do they use to make their minds up?

Calderon Kellett Well, they know how many people are watching. For me, what’s more interesting is that the guy who drove me the other day was Cuban, so I was like, “Oh my God, I have a show on Netflix. Do you have Netflix?” “Yeah.” “Have you seen One Day at a Time?” “No, what is it?” I’m like, “How is that possible?! How is that possible that you are a Cuban living in Boston and you’ve never heard of the show?” That’s the stuff that makes my brain explode. I feel like if you have a Latinx name, maybe we should come up in your feed?

Royce I think that would be data farming or whatever you call it.

Calderon Kellett Yeah, there’s analytics and numbers that we’re told a lot about — it seems like an easy match. My masseur is Mexican. I was like, “Rodriguez, do you watch One Day at a Time?” “No.” The second time I went back, it was, “We’ve binged both seasons. We loved it!” So I just need to go out and talk to everybody, apparently. I will knock on doors. I’ll do it. Because I feel like it’s important, it’s not just entertainment — it really does feel like the love and gratitude we get from not just the Latinx community but veterans and the LGBTQ community, disabled, we have a trans character this year we’re very proud of — those communities are starved for representation, and we’re trying to put something positive out there.

Norman, you signed a deal with Sony that could involve reviving some of your biggest hits. Which would make a good reboot?

Lear I’m eager to do Fernwood 2 Night [short-lived spinoff to cult favorite Mary Hartman, Mary Hartman] because I think it would work.

Royce My favorite show. It was so freakin’ funny and subversive.

Lear There were no rules. I mean, Fred Willard and Martin Mull were just brilliant. I want John Mulaney and Nick Kroll [for the reboot].

Mike and Gloria, is there another show in his library that you’d love to reimagine?

Calderon Kellett I’d love to do Facts of Life. For me, that was the most influential show of my youth, sitcom-wise. Just seeing a bunch of young women supporting each other in this time… you’re already doing it though, right?

Royce From what I understand, I’m running the new Fernwood 2 Night. (Laughter.)

We’ve seen a lot of the old Hollywood guard exposed and ousted after years of poor or even criminal behavior. Has the scope surprised you?

Lear Oh my God, it’s totally surprising. I didn’t expect Matt Lauer to get into the trouble he got into or Charlie [Rose] or [Leslie] Moonves or any of them. It’s awesome.

How has what’s considered funny changed?

Lear Maybe the fact that one can discuss more subjects openly has but the same things are funny.

Royce Comedy at its finest is shedding a light on something. What you need to shed a light on is maybe becoming a little clear. The notion that the #MeToo movement is somehow inhibiting or restricting comedy is garbage. You’re responsible for your words. If you’re a writer who spends his day lamenting how you can’t be yourself in the room anymore because you have to maybe not blurt out sexist insults to your colleagues … good! Our writers room can be super-dirty sometimes, and is still plenty honest and hilarious, yet we can do all that while still respecting each other and being aware of making someone uncomfortable.

We’re seeing Netflix sign these massive overall deals. How does that change how you think about your own value?

Royce I’m a bargain, is what I learned.

Calderon Kellett I’ll do it for half what they paid Kenya!

Lear I won’t forget that. (Laughter.)

Calderon Kellett He’s making cool stuff, as is Kenya, as is Shonda. I think it opens doors for us. They’re lifting other people up to tell their story, which is really cool and speaks to the future of content creation. Part of what we need to do is create future showrunners.

Norman, what drives you now, and how has it changed?