Here’s the scariest phrase you can hear from Anthony Scaramucci, who, at least since the second grade, has been known as the Mooch: “Let me tell you what I really think.” It comes as the thunder clap that precedes a freak summer storm, a torrent of obscenities followed by a plain hard-spoken truth.

“I got up close and personal to [the politicians],” he says, leaning across a table at the Hunt & Fish Club, the steakhouse off Times Square that he partly owns, named for the social club John Gotti had in Queens. “They’re the worst people in America. They have the worst values. They’re amoral, twisted, backstabbing liars. They front up like Richie Cunningham or Andy Griffith then fucking kill you with a lightsaber when you’re not looking.”

Scaramucci has cut a surprisingly broad path through the media since those 11 days last year when he served as the wildest White House communications director in U.S. history. He executive produced HBO’s Paterno, starring Al Pacino (“I just gave them the dough,” he told The New York Times). He’s become a near-regular presence on cable TV; his CNN battles with Chris Cuomo are can’t-miss. He’s in talks about a possible show of his own — though he’s uncharacteristically cagey on this subject, sources say the pitch involves the Mooch dispensing advice. And on a recent trip to Europe and the Mideast he appeared on every variety of television, bringing the Mooch to the wider world. 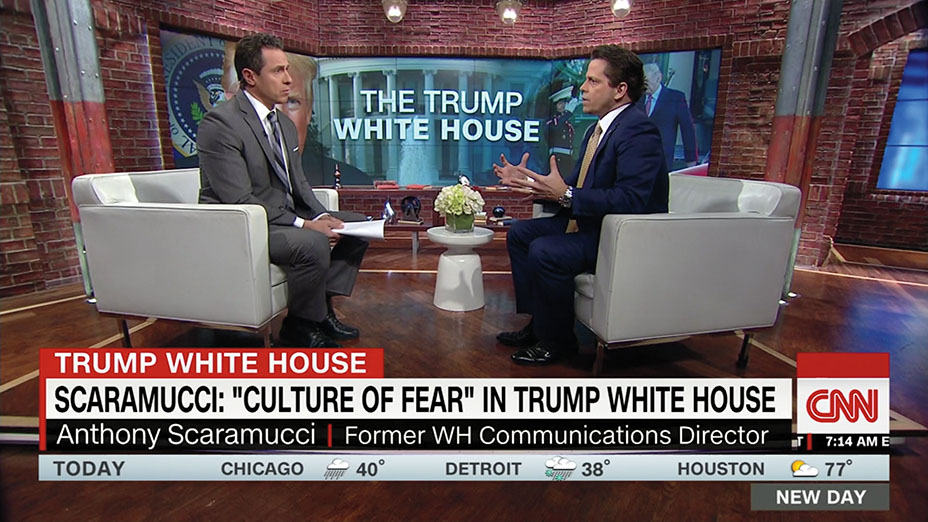 Now, back at work at SkyBridge Capital, he’s also writing a book — his fourth. His earlier works include Goodbye Gordon Gekko: How to Find Your Fortune Without Losing Your Soul and Hopping Over the Rabbit Hole: How Entrepreneurs Turn Failure Into Success. The new one will be The Blue Collar President. “I think it’ll provide insight to people that don’t really understand Trump’s ethos,” he says. Asked to explain what such people are missing, the Mooch starts by saying, “Not to use a sports metaphor,” then goes on: “He’s the guy that’ll always play a two-minute offense and call an audible from the line of scrimmage. He’s a guy that will spike the ball when you least expect it. He’s a shooter in the NBA. He’s a home-run hitter in Major League Baseball. He’s the starting quarterback, no huddle offense, ‘Let’s go run the plays’ guy.”

The Mooch is a perfect person to play a post-crack-up talking head. You can’t keep your eyes off him. It’s his style of speech, which is both flowery and tough — now and then, he puts together a sentence in which two out of three words are vulgarities; that’s like hitting .666 in baseball. It’s his hair, which, thick, dark and well tended, sways slightly, as if inebriated. It’s his face: gleeful and handsome, forever winking, emitting a spark of conspiracy. It’s his strut: chest out and shoulders back, one hand in his pocket, the other on your back, guiding you, as if to say, “This is my time and my place.” And it’s his biography: raised in a working-class family in Long Island’s Manhasset, son of a construction worker and a housewife, captain of the high school football team, president of the student government, most likely to do this and that, Harvard fucking Law School, Goldman fucking Sachs, businesses bought and sold. He’d raised money for presidential candidates Scott Walker and Jeb Bush, and then, when the direction of the Republican primaries became clear, and perhaps spotting an unlikely path to the White House, went all in for Trump.

Once installed, the Mooch did not serve as others had served, but burned, magnificent and brief and bright. He did not merely take questions from hacks — he read them the riot act, threatened, vowed to cut the nuts off the swamp beasts that live beneath the capital. Eleven days of fury that ended when the Mooch, feeling rascally — “fucking leakers” — got on the phone with New Yorker reporter Ryan Lizza, not a personal but a family friend (“His father worked with my dad on a construction site”) and said something about Steve Bannon’s ability to “suck his own cock.” So ended the Mooch era of American history. 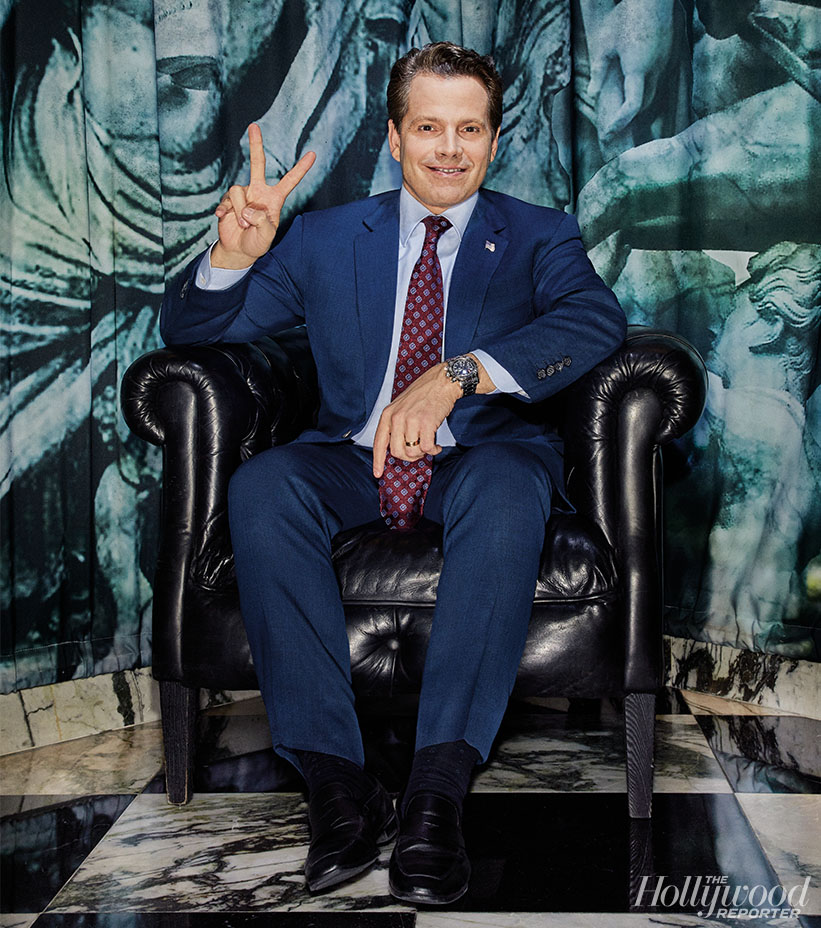 “He’s recording me,” Mooch says, talking fast. “I’m ridiculously naive, deserve to be fired for that reason. I say something off the record that is quote unquote on the record and being played on CNN. John Kelly fires me, the rest is history. The Lizzas and the Scaramuccis will never talk again. They’re dead to the Scaramuccis. Likely can’t get restaurant reservations in certain Italian neighborhoods on Long Island. One of the most egregious, most dishonest, backstabbing, low-life things that you could do to a fellow Italian.”

Asked if he took pleasure in Lizza’s own recent troubles — he was caught in a #MeToo moment and let go by The New Yorker — the Mooch grins. “To the extent that he can’t hurt other people the way he hurt me,” he says. “But I don’t give a shit. He’s fucking dead to me.”

Mooch orders an iced tea, sucks it down, dips his wet straw into a packet of Splenda and brings it to his mouth, again and again, like a humming bird extracting nectar. “I was the Ernst & Young entrepreneur of the year in 2011,” he says. “I was number 85 on Worth magazine’s most influential Wall Street people in global finance. I was the host of Wall Street Week. I’m the founder of two companies. And I’m remembered as being the 11-day White House communications director. But here’s the lesson of all that. It’s what Mel Brooks said. ‘Relax, none of us are getting out of here alive.’ And, by the way, from 1650 to 2150, there will only be one person remembered from that 500-year period — Neil Armstrong.”

Scaramucci’s son A.J., the oldest of five, slides into the booth across from his father. He’s a 25-year-old Stanford grad student, quiet and reserved. You might consider his mild demeanor a reaction against his father — as with presidential politics, we crave the opposite of what we currently have: We had a sane and sensible leader, so we wanted an unhinged wild man. Soft-spoken A.J. is almost swallowed up by the booth. The Mooch smiles at him. It’s an expression that says: “Look at this kid. He’s perfect!” 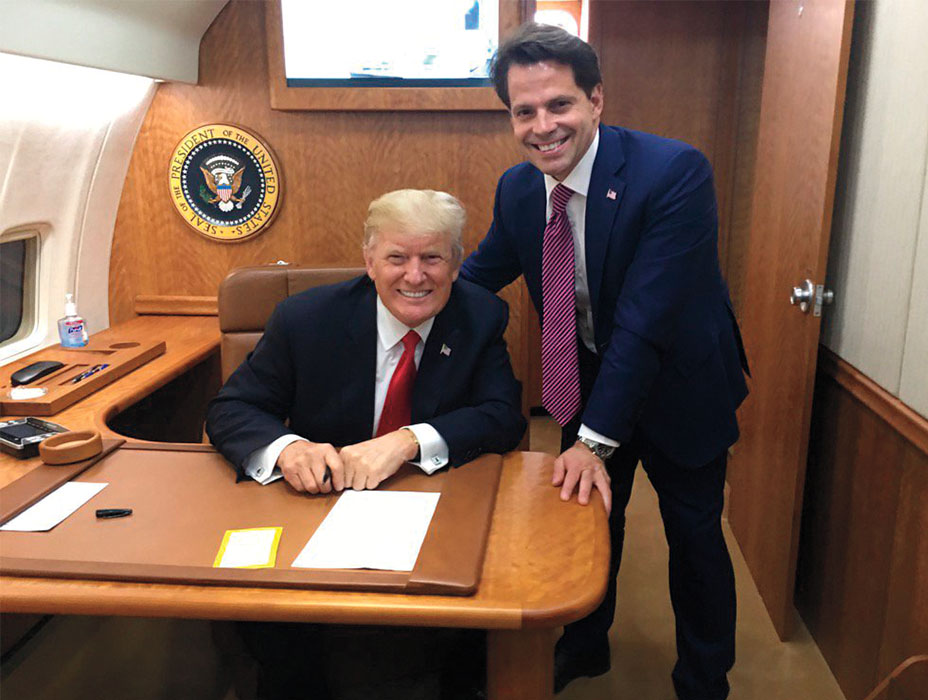 Asked the secret of good parenting, the Mooch thinks a moment, then says, “Get off of the self-esteem movement. Tell the kid the truth. This kid, I give his mom a lot of credit,” he says, referring to first wife Lisa Miranda. “If he was off-key when he was singing opera, she’d tell him.” (The Mooch remains married to Deidre Ball, who filed for divorce last July; the two reconciled in November.)

Mooch stands, stretches, looks around, then heads down to a mirror-filled clubroom in the basement to have his picture taken. He sits at a table arranged to look like the Last Supper, only his Judas, Lizza, is far away, writing for Rolling Stone. There’s a steak knife in front of Mooch. He picks it up, then drives the blade into the space between his outstretched fingers. “Pretending I’m cutting into Reince Priebus,” he says, grinning. “Only it’s not his finger I’m cutting off.”

"Every Place I Mention Is Totally Hot": The Mooch's Favorite New York Spots