After removing her name from the Sundance documentary On the Record, Oprah Winfrey appears to be straddling #MeToo fault lines. On the one hand, the 65-year-old media mogul has said she believes the women featured in the film who accuse Russell Simmons of sexual assault. On the other hand, she now has said that there are inconsistencies in the account told by Drew Dixon, the film’s main accuser, that “gave me pause.” Her withdrawal came as a shock to the accusers who, according to sources, were never contacted by Winfrey right before or after dropping the film. Hanging in the balance is Dixon herself, whose harrowing claims of being sexually attacked by Simmons in 1994 lie at the heart of Kirby Dick and Amy Ziering’s doc, set to debut Jan. 25 at Sundance.

“The last few days have been like a hellscape that I honestly can’t even really believe is real,” Dixon tells The Hollywood Reporter. “I’m still just trying to wrap my head around the fact that somehow this is where we all find ourselves going into Sundance, which was already a source of anxiety, and now it’s just turned into a pressure cooker and it’s really, really scary.” (Simmons, who has been accused of sexual misconduct by at least 20 women, denies all allegations of nonconsensual sex).

Writer and domestic violence activist Sil Lai Abrams, who is featured in the film and alleged in a 2018 THR story that the music mogul raped her in 1994, says the drama around the film’s premiere “has been extraordinarily disorienting and upsetting. It feels like us against the world. I’m filled with anxiety and fear.” She recently began working with a trauma specialist provided by the directors, who, she says, “recognize how difficult this is on us.” 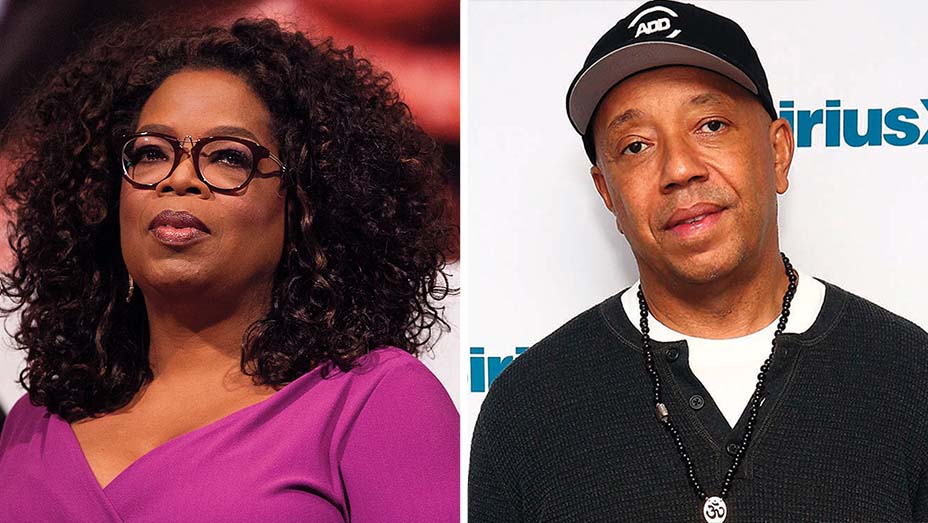 The filmmakers’ partnership with Winfrey and Apple was meant to promote a rare examination of the experience of African-American survivors, a demographic that has received scant media attention in the #MeToo era. But now Winfrey’s multiple comments are being met with outrage by activists. Equality Now global director Yasmeen Hassan, who will be on hand at the film’s premiere, calls Winfrey’s move “callous.”

“I know how hard it is for victims and survivors to come forward to tell their stories, and you expect doubts to be raised by the lawyers of the accused and the accused,” Hassan tells THR. “The fact that Oprah Winfrey is doing the same thing is shocking to me. There needs to be a lot more explanation given to these women, at the very least. This feels mind-boggling and is very bad for the #MeToo movement. We are sticking with the survivors.”

Notes Melissa Silverstein, founder of the advocacy website Women and Hollywood and director of the Athena Film Festival: “[This is] one of the saddest moments for the #MeToo movement. This whole situation is tragic, particularly for Drew Dixon. Do you support Drew or do you not? Just think how hard it is going to be for women, particularly women of color, to come forward next time when they have been thrown under the bus by none other than Oprah.”

If the fallout is clear, Winfrey’s decision to extricate herself from the film is anything but. She defended her controversial decision to back out of the film in a Jan. 17 story in The New York Times but did not elaborate on what the inconsistencies are in Dixon’s account or why they prompted her to take the unprecedented step of abandoning a film 15 days before its Sundance bow. She said only that an unnamed mystery person she trusted cast doubts on Dixon’s claims. A spokesperson for Winfrey tells THR, “Oprah did not want the other women’s stories to be diminished to a sound bite. She wanted more women’s voices heard and to explore the culture of the time.”

Still, Dixon’s story was well vetted in a 3,600-word story published in December 2017 in The New York Times. That article, which also includes claims by two other Simmons accusers, has remained on the Times’ website for two-plus years, with only one correction unrelated to the three accusers’ stories (the correction notes that Simmons no longer has ties to a company he was involved with called Global Grind).

Winfrey appeared on CBS This Morning on Jan. 21 and doubled down on her position, saying to host Gayle King, “I think there’s some inconsistencies in the stories” and noting that the timeline of her exit was irrelevant. “Until the thing is on the screen, you have the right to change your mind.”

Apple was poised to release On the Record as part of its deal with Winfrey. (In June 2018, Apple signed a multiyear content partnership with the mogul in which they would jointly create original programs to be released on Apple’s platform.) Sources say Apple was not given a heads-up before Winfrey pulled out Jan. 10, while Dick and Ziering have said they were given only 20 minutes’ notice before she made her announcement. But another source downplays the idea that the Apple blindside caused any friction, saying that Apple is aligned with Winfrey, and that if she chooses to drop any project, Apple would follow suit.

According to the Times, Winfrey sent On the Record to filmmaker and friend Ava DuVernay, who expressed concerns, but it is unclear what those concerns were. DuVernay did not respond to THR’s request for comment.

Also caught in the crosshairs is an AppleTV+/Harpo docuseries called Toxic Workplace that was executive produced by Dick and Ziering. Apple has pulled the plug on the series, for which the filmmaking duo already has begun taping interviews. Apple declined comment.

“It was very disappointing and upsetting,” says Ziering in the aftermath of Winfrey’s decision to dump the film. “We were concerned about the survivors and what the hell this is going to do to them.”

Three days after Winfrey pulled out, Washington publicist Ann Marchant, who was representing a group of Simmons’ accusers as well as the film’s executive producer Abigail Disney for a period in 2019, issued a press release saying, “Russell Simmons and his enablers cannot intimidate us, bully us or ignore us.” That same day, three of Simmons’ accusers appeared on CBS This Morning, including Dixon, who said, “I hope that black women and girls become more visible as a result of this documentary.” But sources say the accusers cut ties with Marchant directly after, having felt blindsided by the fact that Winfrey’s friend King introduced the segment and offered the following explanation: “She thought the documentary needed to breathe a little bit more and be put in context of the times. These allegations were many years ago, and now we’re in 2020.”

King’s comment bothered Abrams, who says, “It’s troubling to see [King’s remarks] because what it implies is that perhaps what we say is rape would in other times be just seen as partying. Is what’s being said — that the hip-hop era in the ’90s and those who were in that sphere, that’s what you signed up for? Is the price that we have to pay is that rape is questionable depending on the context of the times?

On the Record, which THR has seen, includes interviews with Sherri Hines of the hip-hop group Mercedes Ladies, who told the Los Angeles Times in 2017 that Simmons raped her in 1983, and screenwriter Jenny Lumet, who claimed in a 2017 guest column in THR that Simmons raped her in 1991. Additionally, there are interviews with activists like #MeToo movement founder Tarana Burke, journalist Kierna Mayo and civil rights lawyer Kimberlé Williams Crenshaw, who all touch on the complex burdens black women have faced in telling their stories of sexual assault, including, as Burke describes it in the film, “Black women’s need to protect black men.” Says Dick: “There was this exploration and discussion around these issues, especially among black feminists, that has been going on for decades. But it wasn’t reaching the mainstream. It seemed like this was unexplored territory.”

Despite the many voices, the 95-minute movie focuses primarily on Dixon’s experience, because, Dick says, “She had such an amazing story and such deep insights into her experience that it just opened up a whole world to us. We thought if we were feeling, ‘Wow, this is a whole new world of understanding these issues,’ audiences would feel the same way.”

When Winfrey asked the filmmakers to hold the movie back from Sundance and keep working on it, they responded, “This movie is going to Sundance with or without Oprah,” according to a source close to Winfrey. As executive producer, Winfrey could have prevented the film from playing at the festival but instead decided to release it to the filmmakers.

Ziering and Dick say they were caught completely off guard by Winfrey’s change of heart about the film, that she saw a cut in June very similar to the one going to Sundance, loved it and committed to it then and there. Apple and Winfrey’s Harpo Productions submitted the Sundance application, and Harpo announced the film Dec. 3 in a news release sent the day before the Sundance lineup was unveiled.

At some point between the Dec. 4 Sundance announcement and Jan. 10, Winfrey changed her mind about taking the documentary to the festival. “We felt that we couldn’t change course,” Ziering says. “Once there’s a Sundance announcement and you make a film on sexual assault, we know having been in this game that you don’t want to do anything that would be interpreted as succumbing to harassment and intimidation. We don’t want to in any way impugn these women. We weren’t going to let their voices be diminished in any way.”

Some critics of the move to drop the film are singling out Apple even more so than Winfrey. After all, Apple could have continued to back the film even after Winfrey bowed out as an exec producer. Many pointed to Apple’s decision to pull the film The Banker from the AFI lineup — thus ruining its awards-season prospects — after allegations surfaced that the son of the man on which the film is based raped his half sisters. The son is not featured in the film, and the decision struck many as a capitulation, although Apple later set a release date for March.

Ultimately, Winfrey’s move and subsequent remarks have benefitted Simmons — even if unintentionally — as he tries to rehabilitate his image from his new home in Bali. But during her appearance on CBS This Morning Winfrey bristled at the suggestion that she had inadvertently helped Simmons by pulling out of On the Record. “This is not a victory for Russell,” she said. “I did not pull out because of Russell. … I cannot be silenced by Russell Simmons after all I’ve been through.”

For Dixon however, any gains for Simmons are in the short term and, she believes, it’s just a matter of time before the truth catches up to him.

“Russell Simmons probably does believe that in this moment he’s winning,” she says. “But the fact of the matter is he’s really just buying time because eventually the consequences of his actions will catch up to him. So, the only question is how many more people is Russell Simmons going to hurt along the way, as he tries to outrun his own fate, created by his own terrible, vicious, brutal, cruel choices.”

Jan. 22, 2:45 pm PST Updated to note that Marchant has represented, but does not currently represent, Abigail Disney.