If the creation of the Academy of Motion Picture Arts and Sciences’ museum were itself a movie, then the long-running saga could be said to, finally, be entering its climactic third act as it heads for a planned opening in the middle of 2019.

At the $388 million museum’s site on Wilshire Boulevard and Fairfax Avenue, the old May Company building has been hollowed out and seismically retrofitted while, beside it, the Renzo Piano-designed sphere that will house a 1,000-seat theater is taking shape. Right now, mid-construction, comparisons to the Star Wars Death Star are inescapable, though when complete, it’s meant to take on a less threatening profile.

Inside the Academy Celebration Honoring Sacheen Littlefeather, 50 Years in the Making: "Tonight Is Her Vision of the Path Forward"

And, as work continues on what is officially to be called the Academy Museum of Motion Pictures, on Sept. 27 AMPAS is set to announce that investor and philanthropist Haim Saban, who made his fortune off the Power Rangers franchise, and his wife, Cheryl, are donating $50 million to the project. It’s by far the largest gift the Academy has received — the May Co. building will be renamed the Saban Building — bringing the museum’s fundraising to date to $288 million, nearly 75 percent of its goal.

The Sabans’ involvement began when Netflix’s Ted Sarandos invited them to a dinner. When he told them it would be about the Academy’s museum and that he’d be seating the couple on either side of Leonardo DiCaprio, Haim admits his first reaction was, “Holy cow, that’s bad news!” and he warned Sarandos upfront, “We give to education, we don’t give to museums.” But the couple was impressed with the rationale for the museum they heard that evening, and when Disney CEO Bob Iger, chair of the museum’s capital campaign, followed up with them, Haim says, “It started to make a lot of sense.” Cheryl elaborates, “Even though Haim and I have generally given to organizations that have to do with education and health care and children’s and women’s issues, we realized this is education. And not only that, but it has to do with the business we belong to. That’s why we thought it’s a very good fit.” Adds Haim, “Having benefited both from the generosity of this city and the support we got from the community when we started our career, we thought it absolutely appropriate and called for us to give back.” 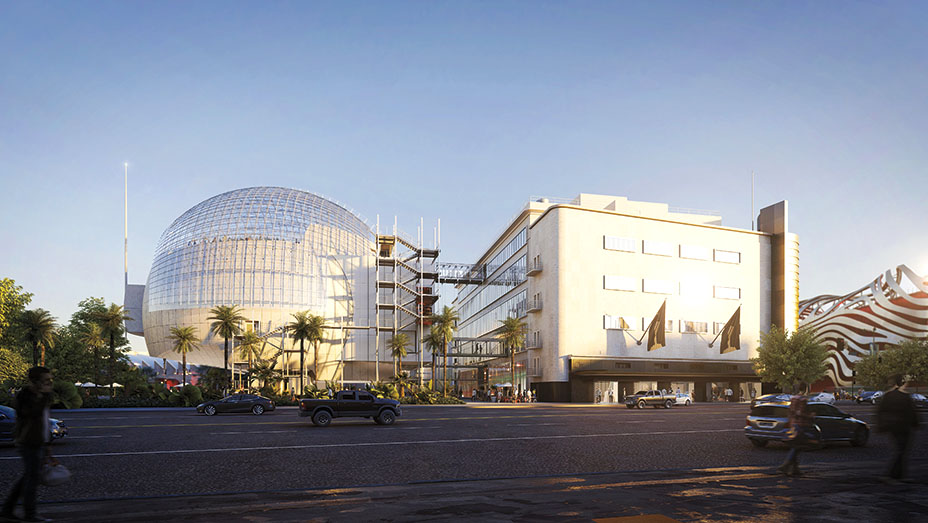 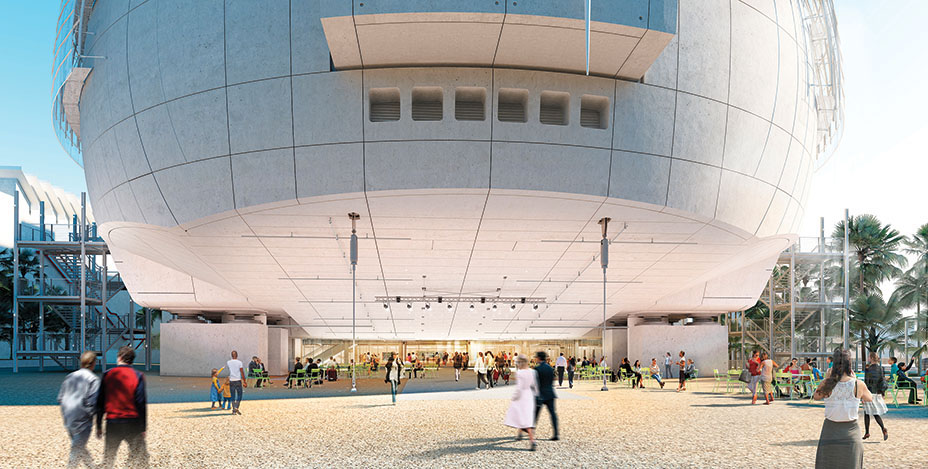 Looking toward the organization’s long-term operations, museum director Kerry Brougher is also set to announce that Ron Meyer, vice chairman of NBCUniversal, has agreed to serve as chair of a new 31-member board of trustees, separate from the Academy’s board of governors, that will oversee the museum. “For me, it was irresistible,” says Meyer, an L.A. native who once worked just down Wilshire at the old Orbach’s department store. “When I took a look at what they were doing and how they were doing it, it’s so great for this town, great for this business, great for tourism. It will do something great for Los Angeles.”

For Brougher, 65, the former interim director and chief curator of Washington, D.C.’s Hirshhorn Museum, who joined the Academy project in 2014, watching the cranes haul panels for the sphere into place as fundraising accelerates has “made the museum feel extraordinarily real,” he says. “In addition, a lot of work is being done on the core exhibition, the permanent exhibition on the history of moviemaking, as well as the temporary shows.”

In a first preview of what visitors can expect to find in the museum, Brougher says, “We want to achieve the feeling you are going on a journey, an adventure, a kind of movie itself, walking through a dreamscape of immersive environments and moving images as well as the objects we have in the collection.” While there will be one gallery devoted to the history of the Academy Awards and another evoking what he calls “the Oscar experience — you can walk the red carpet and get your own Oscar,” most of the two floors devoted to the permanent exhibition will follow a chronological path, exploring the invention of cinema, moving on to Hollywood and the studio system and then focusing on filmmakers who work outside the studio system, from Italian neo-realists and the French New Wave to the present day. Additional galleries will house a section devoted to world-building and the role of visual effects. 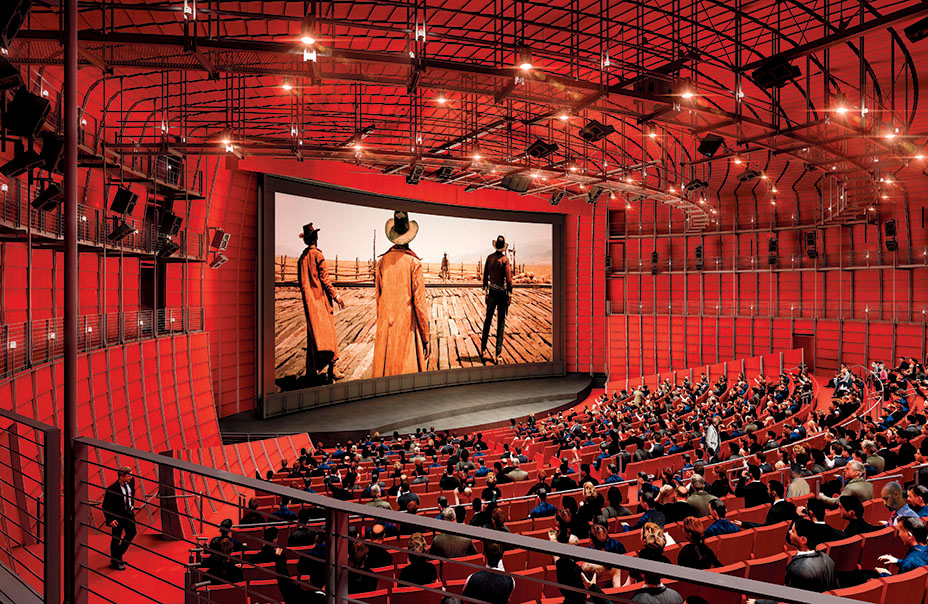 The core exhibition, which will be supplemented by a third floor of rotating, temporary exhibits, is being designed by Rick Carter, an Oscar winner for production design on Avatar and Lincoln, along with London-based design firm Gainsbury & Whiting, which has mounted such exhibitions as the Alexander McQueen retrospective at New York’s Metropolitan Museum of Art.

While the museum has been a longtime dream for many in the Academy, dating as far back as the 1960s, realizing it has required a long slog through planning delays, mounting costs and rising questions about what shape both the building and its contents should take. Originally, the Academy planned to build a $400 million museum from the ground up, purchasing a 3.5-acre site in Hollywood in 2005 for $50 million. But following the 2008 fiscal crisis, that plan was abandoned as too ambitious. (The property was eventually sold for $48 million in 2014.)

Instead, a new, initially more modest proposal was put forward. In 2011, the late Academy president Tom Sherak, backed by the Academy’s then-new CEO Dawn Hudson, announced a deal with the Los Angeles County Museum of Art, under which the Academy would pay $36 million for a 110-year lease on the historic May Co. building, a famed piece of Streamline Moderne architecture dating from 1939 and adjoining LACMA’s own campus. The cost of turning the six-story building into a museum that could house the Academy’s collection of film memorabilia was pegged at about $200 million with an opening as early as 2014. A $250 million capital campaign, headed by Iger, with Academy board members Tom Hanks and Annette Bening serving as co-chairs, was launched in late 2011. 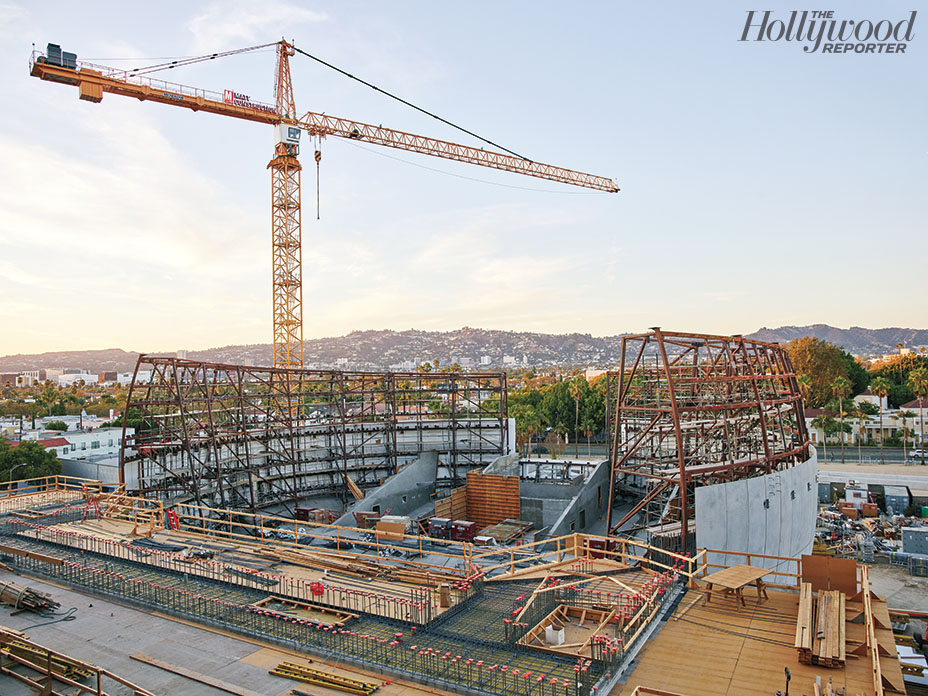 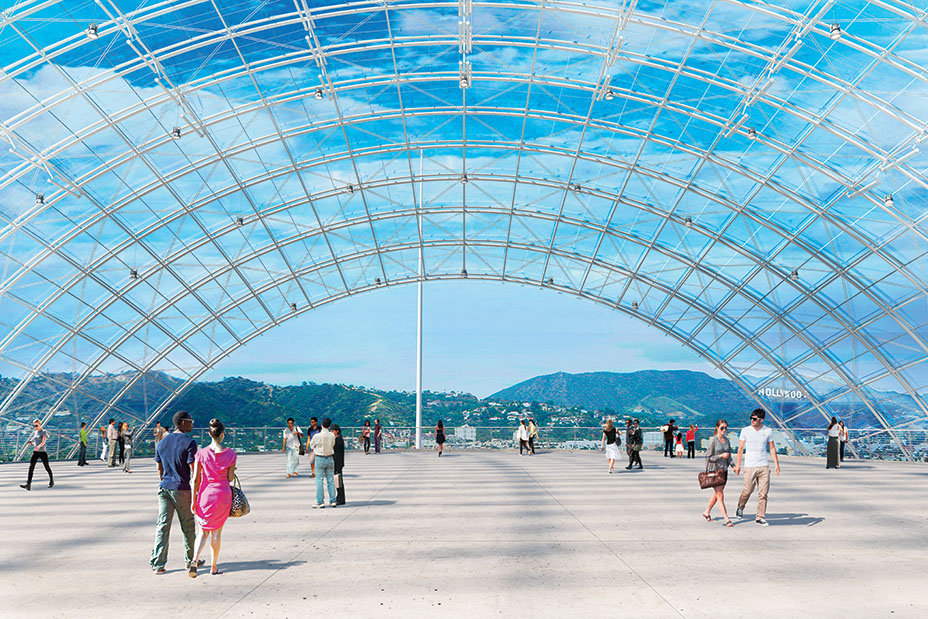 Initial designs for the new museum, unveiled in 2012 and created by Piano, the Italian master whose buildings include Paris’ Centre Georges Pompidou as well as LACMA’s Contemporary Art Museum and its Resnick Pavilion, introduced a major new element: a huge sphere housing a state-of-the-art theater as well as an open-air terrace looking out onto the Hollywood Hills. But after an initial burst of fundraising — the Academy reported $100 million in commitments that same year — the project hit several snags as workers began excavating beneath the May Co. building.

Internally, some members of the Academy board voiced concerns about the project’s scope and execution, even questioning whether the venture was in the Academy’s best interest.

It wasn’t until 2015 that the Los Angeles City Council approved the museum — and even then the Academy had to fend off a threatened lawsuit by the neighborhood group Fix the City by agreeing to traffic and parking controls and reduced signage. Shortly thereafter, Bill Kramer, who, as managing director, had shepherded the project through its early stages, left for a post at the Rhode Island School of Design. Brougher has since had to fill several top leadership roles. (Less than two years from the proposed opening, he finds himself still looking for a chief curator.) 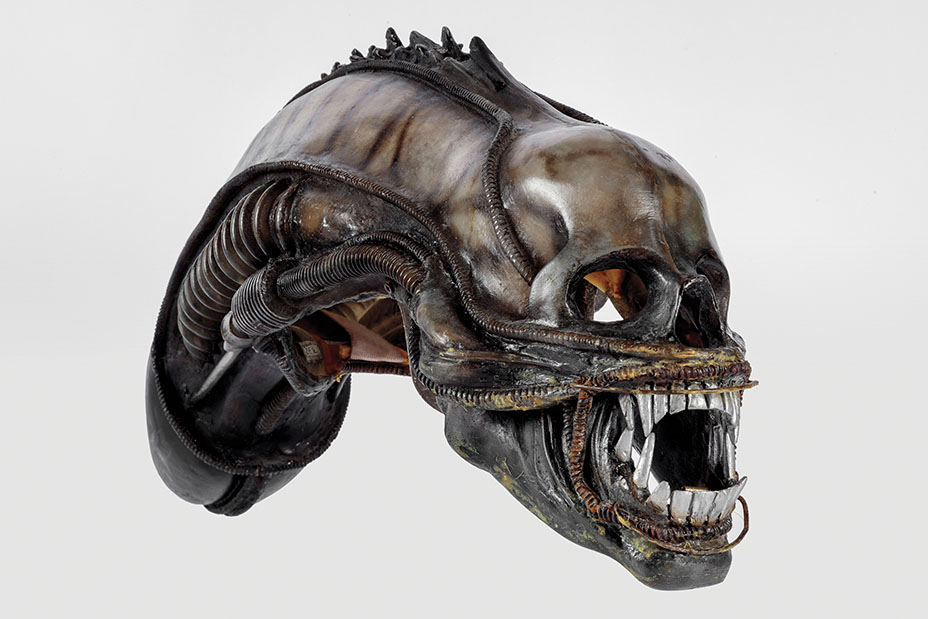 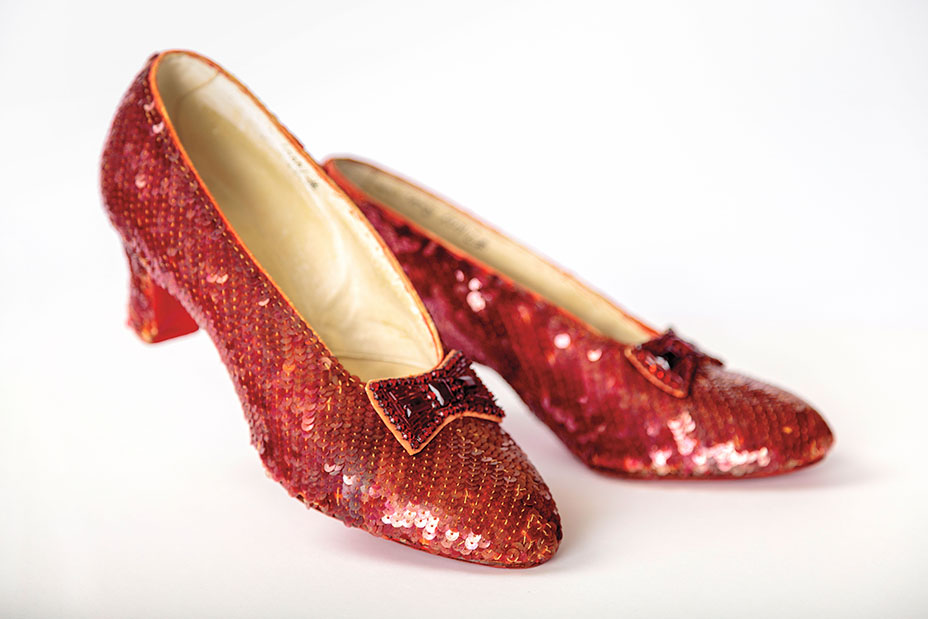 Rich Cherry, who joined the museum as COO in February after having overseen construction of The Broad museum downtown, argues that the project didn’t run into delays so much as see its design evolve. Two smaller theaters originally planned for the May Co. building were combined into one 288-seat cinematheque beneath the outdoor plaza, requiring digging a hole that took additional time and money, and the main theater inside the sphere was upgraded from 655 seats to 1,000 so that it can be used for premieres and nighttime events. “Right now, we’re in a really good spot,” he says.

Katharine DeShaw, who was named managing director, advancement and external relations, in October 2016, also cranked fundraising efforts back up. “Most campaigns stay in quiet phase until they’re practically done,” she admits. “When the Academy had good news to share along the way, they did, but we have been in a quieter mode in the last couple of years. Behind the scenes, though, there has been a lot of momentum. I’m on the site now on a daily basis, and our current and prospective donors can actually see it coming out of the ground.”

The Academy also has been quietly collecting physical artifacts, the one area in which its own holdings were admittedly weak. Recent acquisitions include creatures and props from the Jim Henson Company; Anjelica Huston’s Morticia Addams gown; a space capsule from Apollo 13; and a number of pre-cinema devices, like magic lanterns and camera obscuras, from collector Akram Miknas.

Vows Brougher, “This will truly be the world’s premier film museum.” 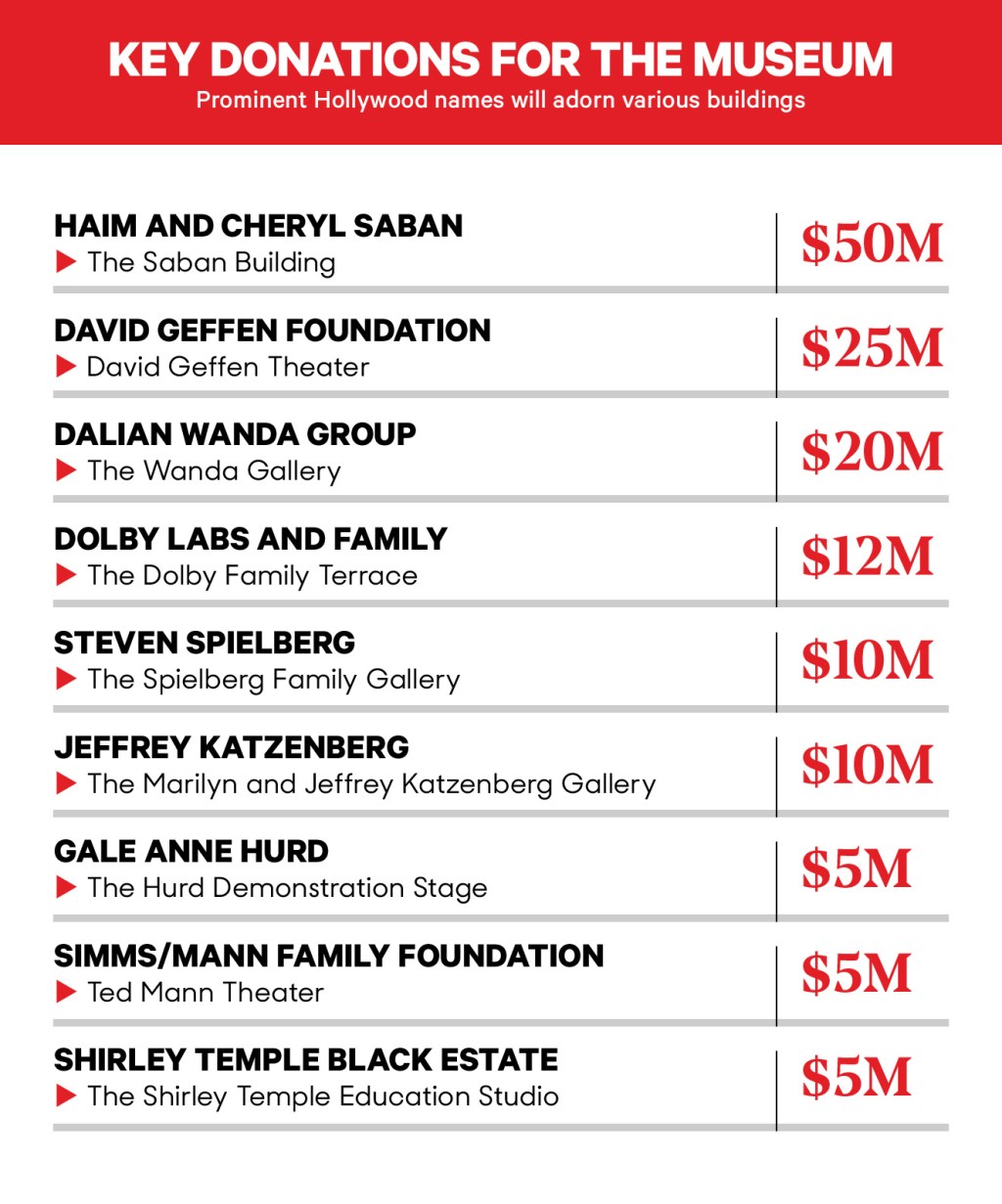