Last October, the Academy of Motion Picture Arts and Sciences reached out to a man it believed could save the Oscars from a ratings nosedive and a growing sense of cultural obsolescence. A proven box office performer with a giant social media following, appeal across the political spectrum and enough of a sense of showmanship to pull off a blue velvet tuxedo jacket with a 50-inch chest, Dwayne “The Rock” Johnson seemed like just the man for the daunting job of hosting the Oscars in 2019.

“We didn’t campaign for it, but the call came, and I was over the moon,” Johnson says. “Immediately my brain started going, ‘We’ll do this kind of number and that.’ We were going to turn the Oscars on their head and make it something special and unique and different and start a new era of how Oscars are going to be enjoyed. That was the goal — audience first.”

For all of Johnson’s enthusiasm and seeming fitness for the task, the Academy’s conversations with him stalled over timing, he says, with the actor committed to shoot two movies, the Fast & Furious spinoff Hobbs and Shaw and a Jumanji sequel, in the period when Oscars planning and rehearsals would take place. Asking the highest-paid actor in Hollywood to clear his schedule on a few months’ notice, it turns out, was not a winning strategy. Neither was the Academy’s overture to a second seemingly promising host, Kevin Hart, which devolved into a public contretemps over the comedian’s homophobic tweets.

The Oscars is now set to go forward without any host at all for the first time in 30 years and only the second time in its 91-year existence. Even by the clown-car standards of the sprawling, 54-member Academy board, which has ridden out embarrassing scandals like #OscarsSoWhite and Envelopegate, this has been a horrendous awards season, as a group of professional storytellers can’t seem to get it together enough to tell a compelling story about their own biggest night. Going hostless means the Oscar show’s most appealing pitch to audiences may be the possibility of watching a slowly unfolding, three-hour, black-tie trainwreck.

The road to hostlessness began the morning after last year’s telecast, when ABC learned it had been the lowest-rated Oscars of all time, with 26.5 million viewers and a 25 percent drop in the key 18-to-49 demographic. According to one Academy board member, there was a realization that a variety of factors were impacting the show: “There’s Hollywood producing fewer awards-worthy movies. The artists’ desire to be more political. People turning from TV to streaming. The middle of the country rejecting us.”

For years, ABC and parent company Disney, which pays an undisclosed amount to air the Oscars through 2028, had been asking the Academy to make changes to the show, including shortening the run time and ensuring that more of the movies audiences actually see make it onto the telecast. The Academy collects more than 80 percent of its $161.9 million in annual revenue from the Oscars, mostly from the telecast rights. After the network shared that low ratings could impact the organization’s advertising revenue bonuses, ABC found the Academy leadership was suddenly much more open to fresh telecast ideas.

In a lengthy August meeting, the Academy board approved a series of controversial measures, including the now tabled “popular film” Oscar, which would have been tied to box office returns or audience voting. When critics blasted the idea, the board backed down. Still, it pledged to move ahead with another contentious plan, to deliver four of the night’s 24 prizes during commercial breaks and edit those honorees into the show later. Six months later, just 10 days before the show, a high-profile membership revolt would force the Academy to reverse this decision as well.

To pioneer all of its ratings-driven initiatives, the Academy sought producers with bold ideas and strong backbones. It settled on film producer Donna Gigliotti — who is best known for making awards movies like Silver Linings Playbook and Shakespeare in Love but has no live television experience — and awards show stalwart Glenn Weiss, who directed the Envelopegate Oscars and made what was probably that night’s best artistic choice, to zoom the camera in on the envelope in question. By November, when the Academy still didn’t have a host, it was clear Gigliotti and Weiss had taken on an even trickier show than they expected. One option the Academy and the producers weighed after Johnson passed was inviting three separate hosts. “One host for each hour, and it becomes not such a terrible burden for the talent,” explains a source familiar with the Academy’s conversations.

Ultimately the producers invited Hart to take over the show in early December, and the Oscars seemed to have found a host whose humor transcends politics. For a few hours anyway. Social media sleuths quickly surfaced Hart’s tweets from 2009 and 2010 in which he used homophobic slurs and old stand-up bits in which he talked about not wanting his son to be gay. As a firestorm built, the comedian dug in, posting a groggy shirtless Instagram video in which he said he was “in a great, mature place where all I do is spread positivity.”

In a desperate bid to stop the PR damage, sources say Academy CEO Dawn Hudson called Hart in Australia, where he was on tour, and begged him to apologize for the old tweets. The Academy’s request — or demand, as Hart saw it — only further annoyed the comic, who then tweeted that he was resigning from the gig, before making the very apology Hudson had requested. 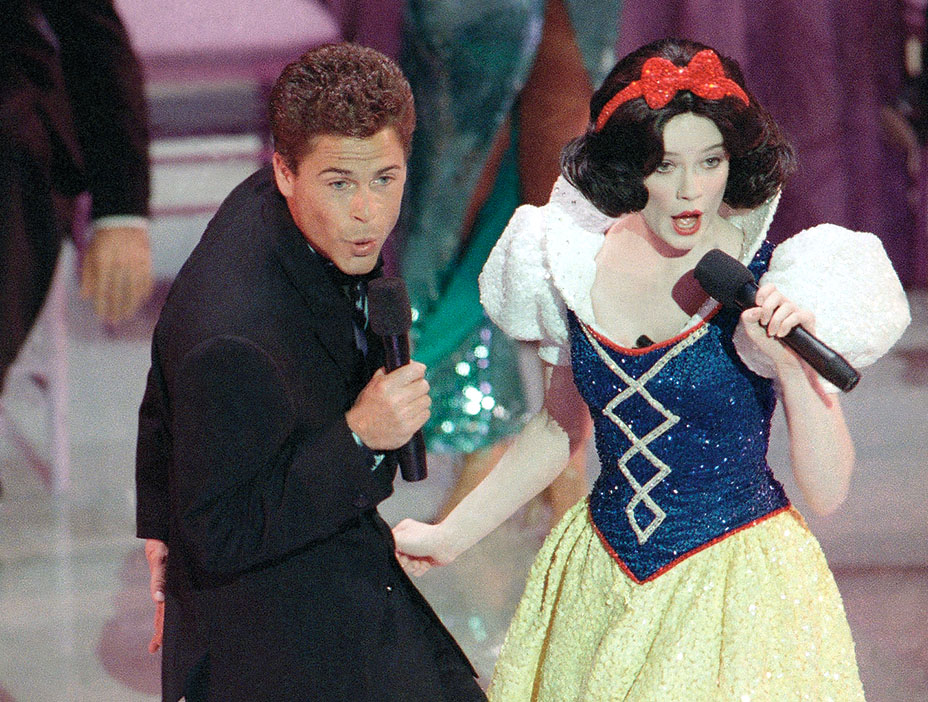 As the Academy headed into the new year, still hostless, one of its old Oscar emcees resurfaced with a ploy to save the day. In January, Ellen DeGeneres had Hart on her talk show in an appearance booked to promote his movie The Upside but used the moment to conduct an interview in which she defended the comedian and advocated for his return to the Oscars. The interview played poorly on social media, but at the time, at least one LGBTQ member of the Academy’s board told THR that she was open to the possibility. “We all can make mistakes,” director Kimberly Peirce, an Academy governor, said in early January, stressing that she was not speaking for the Academy. “Let’s all assume that he made a mistake in the past. I’m not saying he did, but if he did and he thinks he did … is there a chance to honestly approach that? That’s what the culture has to look at.”

The culture may have been ready to look at it, but Hart was not, and by the Oscar Nominees Luncheon four weeks later, the Academy had resigned itself to a hostless show. The producers, meanwhile, were playing whack-a-mole with a new controversy nearly every week over other attempts to make the show shorter, like a plan to have only the best known of the original song nominees perform, which frontrunner Lady Gaga was able to kibosh by threatening she’d walk. The producers’ efforts to prevent actors from also presenting at the SAG Awards backfired, too, when SAG-AFTRA issued a statement blasting “the Academy’s graceless pressure tactics.”

All of the noise has led to an anything-could-happen atmosphere around this year’s show, which ABC is attempting to spin into a virtue. “Ironically, I have found that the lack of clarity around the Oscars has kept them in the conversation,” ABC president Karey Burke explained to the Television Critics Association. “The mystery is really compelling. People really care.”

Oscar hosts may get credit or blame for their show’s ratings, but it’s not clear they have much to do with it. Billy Crystal presided over the most-watched Oscars, in 1998, when 57.25 million people tuned in to see the box office sensation Titanic win best picture. He also hosted the year before, when 17 million fewer people watched as The English Patient won. If it’s the nominated films that pull in viewers, 2019 should be a ratings winner, with three best picture nominees — Black Panther, A Star Is Born and Bohemian Rhapsody — having earned more than $200 million domestically and a fourth, Roma, available to millions on Netflix since Dec. 14.

In lieu of a host this year, Gigliotti and Weiss will rely on a starry list of presenters, including Daniel Craig, Brie Larson, Chadwick Boseman, Samuel L. Jackson, Melissa McCarthy and Jason Momoa. One stunt the producers hope will appeal to young audiences is uniting several of Marvel’s Avengers onstage, just two months before the release of Avengers: Endgame.

In that sense, Gigliotti and Weiss will be deploying a strategy used in 1989, the year producer Allan Carr opted to go hostless by design. That show is best remembered for a disastrous 11-minute opening musical number starring Rob Lowe and Snow White but less remembered for the story Carr hoped to build around his presenters, teaming performers who had something in common, like married couple Don Johnson and Melanie Griffith, or the James Bond actors Sean Connery and Roger Moore.

Joel Stein: How I'd Write Jokes for the No-Host Oscars (Guest Column)

“A host slows you down,” says Jeff Margolis, who directed the 1989 Oscar telecast. “You’ve got to give them something to do during the opening and give them at least three spots during each hour. So we decided we would try and do a show where we made our presenters be the hosts.”

Hosts serve key functions, however, lending both their promotional muscle and their pacing skills. “Sometimes you need a policeman,” Margolis says. Historically, hosts also have served as the proxy for the home audience, reacting to the events in real time, as when a bewildered Jimmy Kimmel stepped up to the microphone after the best picture mix-up in 2017 and said, “I blame myself for this.” Repeat hosts like 19-timer Bob Hope and nine-timer Crystal lent a comforting continuity to the show.

But as pop culture becomes ever more politically aware — and social media provides a way for audiences to vent — the Oscars hosting gig comes with more potential controversy than it did in Hope’s day. Host Chris Rock had to tackle #OscarsSoWhite, and Kimmel the Trump presidency and #MeToo. Focus groups conducted by the Academy indicated that audiences had begun to find Kimmel’s increasingly political persona to be a turnoff, says a source familiar with the research.

For 2019, the Academy hoped to get ahead of any outrage about its plan to deliver four prizes during commercial breaks by showing representatives from various branches a video demonstration of the proposed format. The strategy failed. On Feb. 11, when the Academy announced the categories affected — cinematography, film editing, live-action short, and makeup and hairstyling — membership rebelled. Filmmakers like Martin Scorsese, Quentin Tarantino and Spike Lee signed an open letter calling the move “an insult to those of us who have devoted our lives and passions to our chosen profession” and effectively lobbied the board to reconsider. Four days later, the plan was abandoned.

It’s just the kind of awards-season snafu you would expect the Oscars to address with a tension-alleviating joke in the monologue … if only it had a host to deliver the punch line. 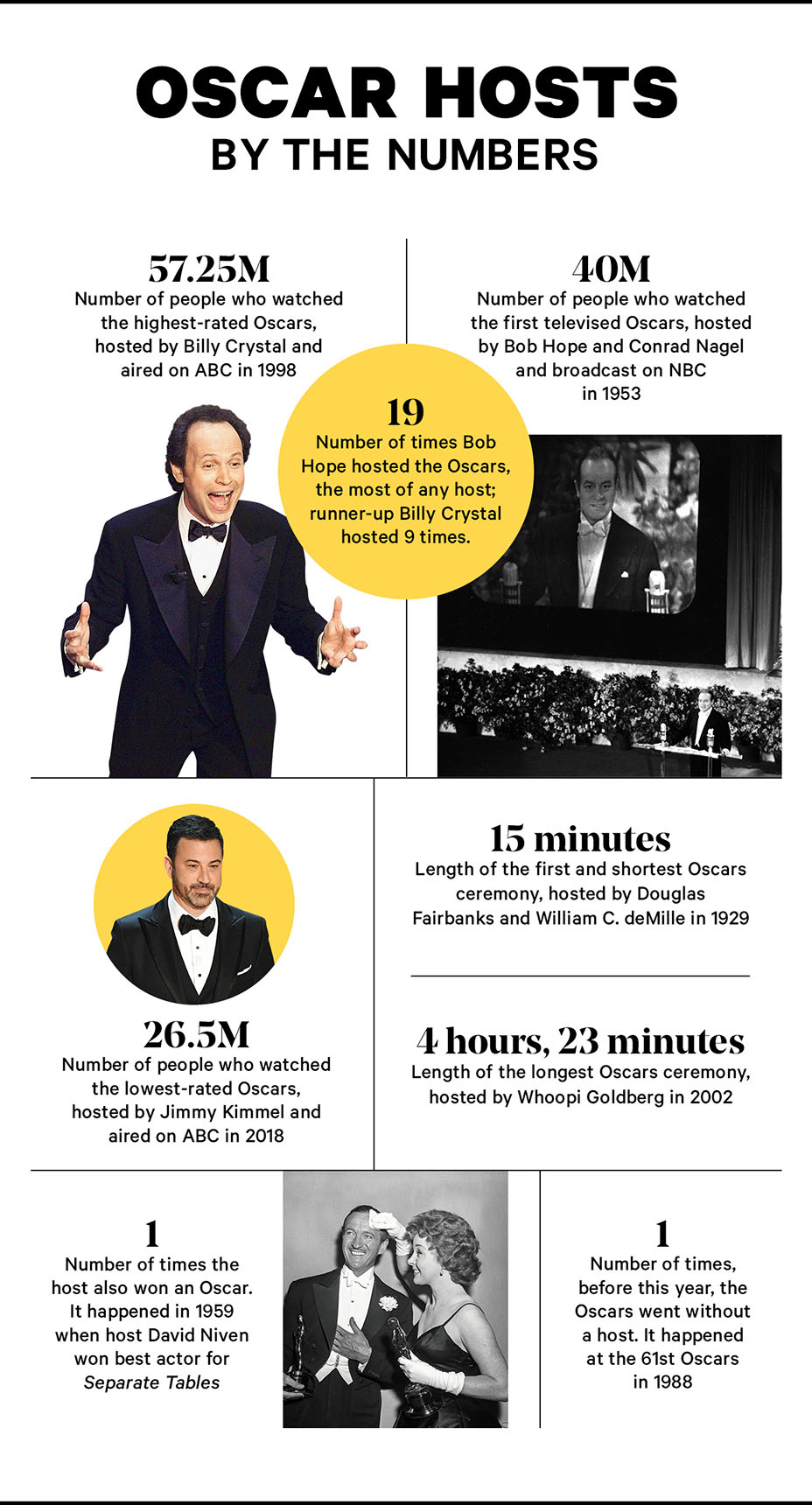 Chris Gardner contributed to this report. 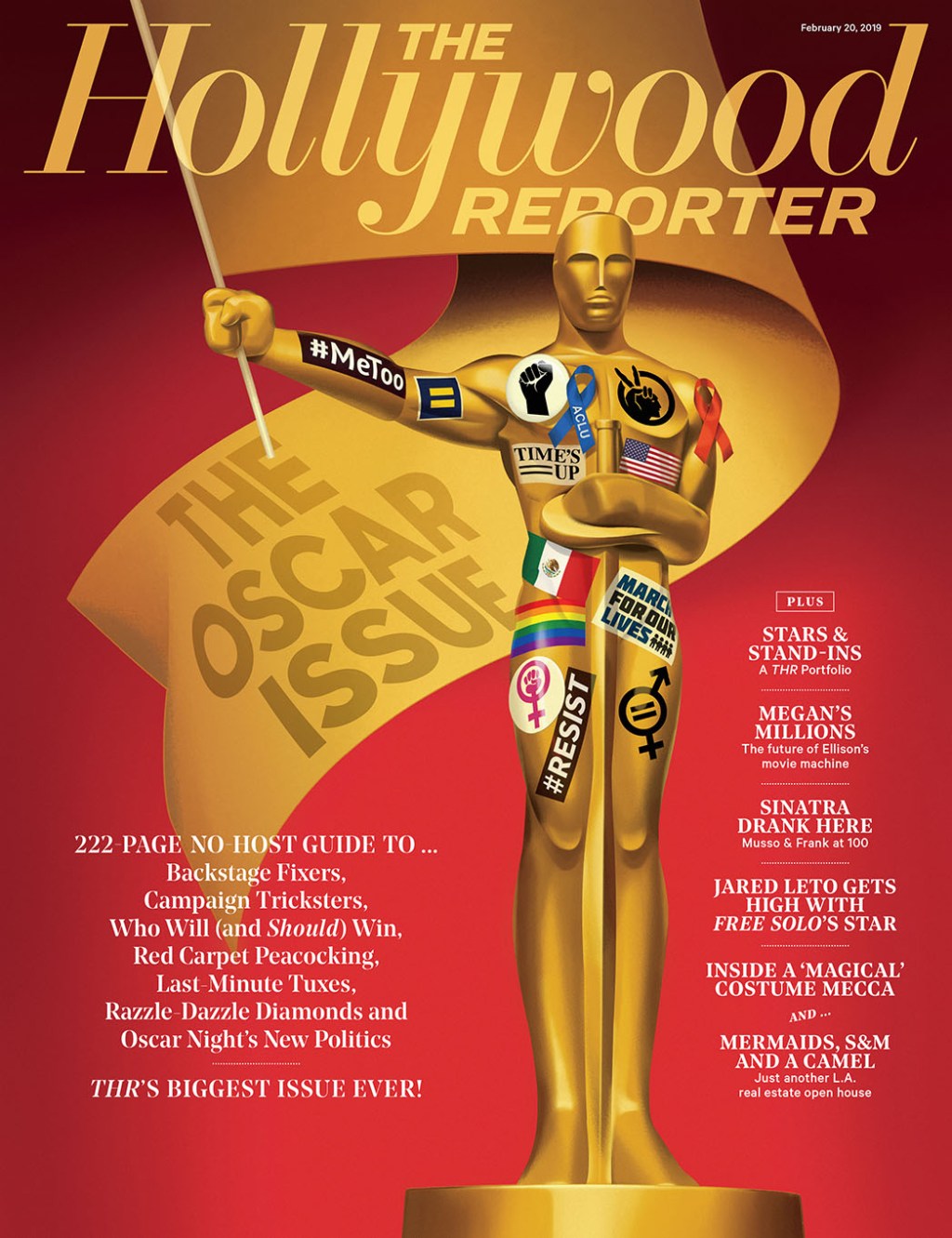