Noah Baumbach’s Marriage Story centers on the emotionally draining divorce of a couple. While that sounds like a very sad and difficult story to watch, and at times it is, it’s also a beautiful and often funny love story. The film, which debuted at the Venice Film Festival in August, centers on New York-based theater director Charlie (Adam Driver) and his wife, an actress named Nicole (Scarlett Johansson), who are on the brink of a breakup after Nicole decides that she wants to move to Los Angeles with their young son. The pair sets out to amicably divorce but, influenced by a pair of cutthroat lawyers (played by Laura Dern and Ray Liotta), things quickly turn ugly.

In particular, there’s a blowout fight scene between Driver’s and Johansson’s characters that not only stunned screening and theatrical audiences but also led to many online memes after the film hit Netflix on Dec. 6. Plus, there was a flurry of online arguments about whether the film portrayed Nicole or Charlie as the more guilty party. Producer David Heyman finds the fact that the film has sparked discussion to be especially exciting. “I think that’s the mark of a really good film, that the journey does not end when the film ends,” he says. Heyman, who also produced fellow best picture nominee Once Upon a Time in Hollywood, spoke to THR about why the love story about divorce resonated with him, his thoughts on whether the film favors one person over the other and how he’s been juggling two contenders during a very busy awards season.

This was your first time working with Noah Baumbach, who has a very specific, detailed style of directing. What did you know about him going into this, and what surprised you?

DAVID HEYMAN I knew his work, and I had had dinner with him. We met Noah when he and Wes [Anderson] were writing Fantastic Mr. Fox. We really got along. He’s very precise. The film you see is very much the script he’s written. I was recently asked about my favorite scenes that he cut. And actually, he cut almost nothing. It’s so precise. But I suppose what surprised me is that for as exacting as he is, how collaborative he is. He likes to talk everything through. From production design all the way down to the marketing, he’s always analyzing, questioning to get a real 360 view of the whole piece.

The film is so relatable to viewers, even if they have never gone through a divorce. What did you find personally relatable?

I think it’s finding, through the journey of separation, the redefinition of a relationship and the fondness and the love that remains. Because when you’ve shared the experience of having a child — I mean, I’ve not been divorced from the mother of my child, but when you’ve had that intimate experience, when you’ve been so close to someone for a year, two years, three years, putting aside a child — when you move on, that experience still is a part of you. And sometimes I know that people separate and never want to talk to their partners again. For me, I’ve remained friends with most of mine. It’s about just getting to that place where you can celebrate what is positive about the relationship, and holding on to that and remembering it. And that I found very relatable and very, very, very moving. The film is fundamentally a love story — it’s a story of a marriage told through divorce, and that idea of looking at a relationship and appreciating the relationship even after it’s over is quite relatable to me. 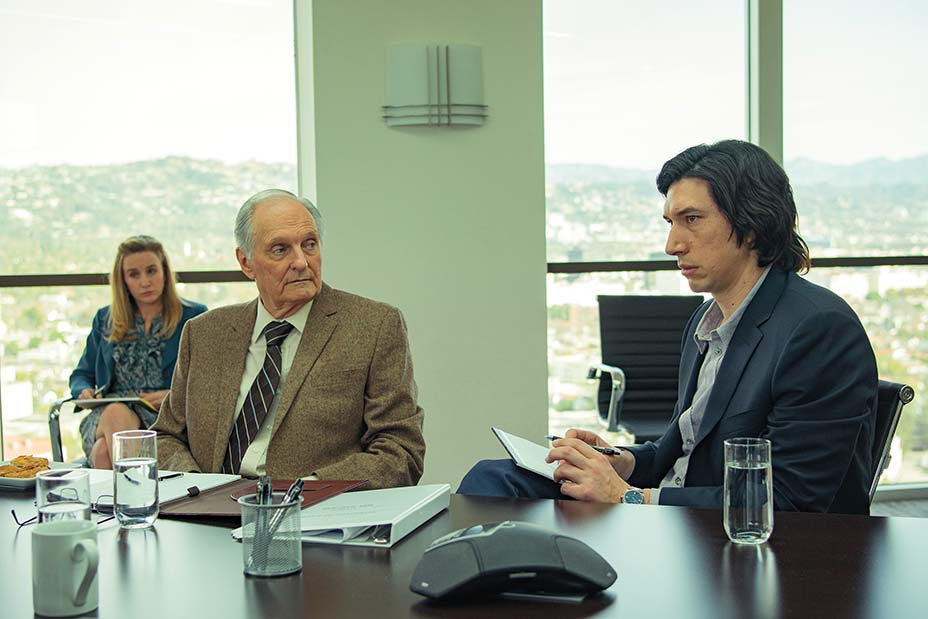 Marriage Story earned three acting nominations. What is it about Noah that he’s able to get those sort of performances?

I think it’s several things. One, the script is so vivid and the characters are so rich and multi­faceted. And two, he creates a very intimate and safe space on set. He takes the time to get what he needs, and that sometimes means 20 takes if need be. He allows the actors to explore. They can offer up different aspects of a scene, of themselves, and they go on the journey of exploring that.

There were some heated arguments on social media about whether the film reads more favorably toward Charlie or Nicole. What did you think of all that?

How great is that? It does not answer all the questions. That’s what I like. It leaves it up to audiences to bring themselves to it and interpret it as they choose. That’s the mark of a really good film, that the journey does not end when the film ends, that it carries on at dinner afterward and in conversations for days, weeks and hopefully months after.

And whose side do you think the film takes?

In a way, Nicole has made the decision to get divorced. She’s reached her place at the beginning of the film, and Charlie is catching up. He ultimately gets to a place of acceptance, but that’s his journey. Through this process, she is finally heard, whereas she might not have been heard within the relationship. Though we feel for him, because he’s going through it and catching up, she’s the one who hasn’t been heard through the course of the relationship.

Adam Driver, who has said he has a phobia of watching his own work, got some attention for walking out of an interview after they tried to play a clip of the film. Do you think that criticism of him was unfair?

Yes, I think it was unfair. He has made it very clear he doesn’t like to look at himself. It makes him very, very uncomfortable. We were at an awards event, and they screened 30 seconds of something, and he looked beyond uncomfortable. I so felt for him. Some people enjoy it; I know actors who like to go to dailies, but Adam is not that. And these are artists. They are by nature sensitive people, and I think to expose him in that way, to show him [footage] when he specifically said, “Please, don’t” — it’s just not right. 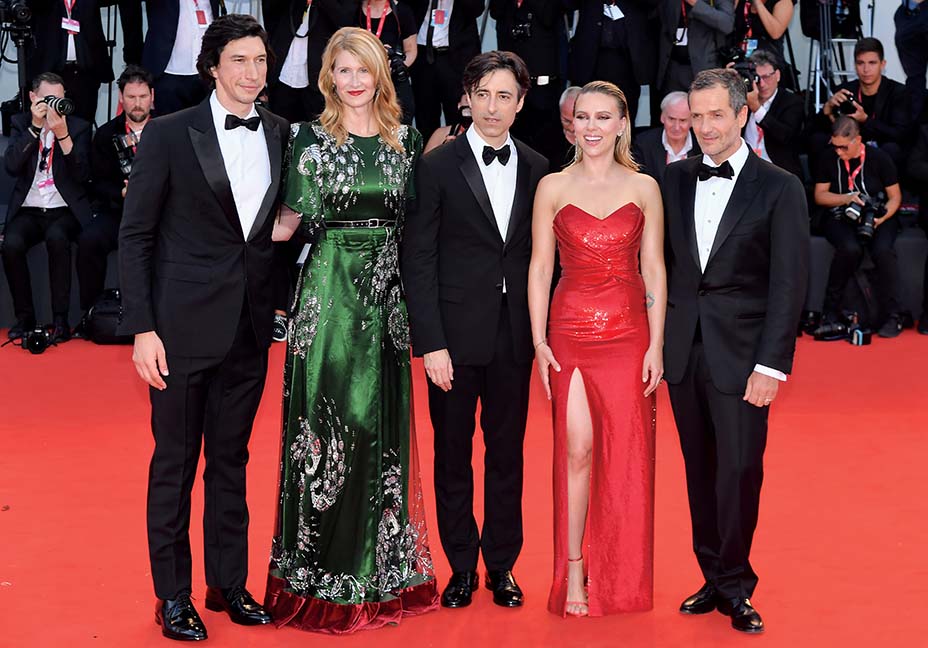 You have two films in the race this year and now two best picture nominees. How tiring has that been for you? Do you feel pulled in different directions?

I’m definitely tired. It’s long and it’s intense — but what a privilege. I feel blessed, I feel grateful. This doesn’t happen. I’ve been nominated once before [for 2013’s Gravity], but it rarely happens in one’s career. To have it twice in one year is bonkers. And fortunately, both Quentin [Tarantino] and Noah have great respect for one another and like each other. I think the key through it all is communication, and I think they know that I care for them. I hope they know. I’m pretty certain they know that I care for them both and respect them both. Has it been tough? Yeah, at times, but gosh, what a high-class problem.

Has there been a highlight of the season for you so far?

Meeting Pedro Almodóvar. I’ve admired his films for many, many, many years. And then to find myself meeting him and talking to him briefly and having my photograph taken with him — it’s something that I want to remember.

Is there something you learned while making Marriage Story that you’ll bring to your next projects?

Both Quentin and Noah don’t allow mobile phones on set. It creates a couple of things: It means that when you’re on set, you’re either working or you are talking to your family of filmmakers who you’re making the film with. You can use the phone, but just leave the set. This created the family atmosphere — just because people talk to each other, as opposed to escaping immediately to their handheld device. I think that’s something that I’m going to encourage other directors I work with to adopt.

What were some performances in the other nominated films that really impressed you?

Antonio Banderas in Pain and Glory. I thought it was a stunning performance, but with such empathy and melancholy. For someone who’s normally so alive in his performance in terms of energy and seduction, to have the bravery to embrace sadness and loneliness, I thought was really beautiful. And Song Kang-ho in Parasite. I think the tonal shifts — not playing it for laughs — is one of the brilliant things about the film: It’s played with integrity and yet it’s very funny.

And what are your plans for after the Oscars? Is a vacation in your future?

I am going to come home [to London] and spend a lot of time with my family.