In December 2017, Dexter Fletcher was immersed in planning Rocketman, a musical about Elton John, when Rami Malek called him from the set of Bohemian Rhapsody, where director Bryan Singer had gone AWOL. “Rami was like, ‘We fucking need you, man. We need somebody,’ ” Fletcher says. ” ‘If you come to set and shit on the floor, you’ll still do a better job than this guy.’ “

Fletcher, 53, had been attached to direct Bohemian Rhapsody up until the first week of preproduction, when it was set up at Sony, before the studio changed its mind about his R-rated treatment of Queen’s story. Now, with the movie at Fox and its $52 million production falling behind schedule and running out of money, Rocketman producer Matthew Vaughn suggested to Fox executive Emma Watts that Fletcher return to finish the film.

For Fletcher, it was a bit like being called by an ex who had broken his heart and suddenly needed a last-minute date for prom. Emotionally, he had moved on to Rocketman, a movie that seemed to be the culmination of his creative ambitions, and he was committed to a spring 2018 start date with Taron Egerton in the role of the singer-songwriter. But he also saw an opportunity in Fox’s dilemma. “I want to be a guy where the folks go, ‘Well, he’s fucking reliable. That’s good.’ Because I’ve got drive. I want to be somewhere. I want them to be like, ‘OK, we need to put together a movie. Who can we trust with that money? Well, he fucking got us there and delivered.’ “

By 8 a.m. the next Monday, Fletcher was on Bohemian Rhapsody‘s London set, directing the last three weeks of principal photography, as well as additional pickup shots. It was a decision that would plunge him into the middle of the bizarre Singer saga — he took over the movie a year before an Atlantic article detailed sexual misconduct allegations against the filmmaker — and align him with an Oscar-winning, $900 million box office triumph. He did not shit on the floor.

Now Fletcher is at an L.A. restaurant in April, in town for meetings before heading to Cannes for his musical’s world premiere. He’ll bring with him to France the outsized expectations wrought by Bohemian Rhapsody‘s success and a sense of responsibility for John’s warts-and-all story, which mirrors some of Fletcher’s own history with drug addiction and early fame as a child actor in England. Today, that’s a burden that Fletcher wears as lightly as one of John’s signature feather boas, as he gestures and curses and unspools his story with the showmanship you’d expect from a man who has become Hollywood’s designated chronicler of 1970s pop icons. Two sets of reading glasses are stacked atop his mop of wavy silver-brown hair, the first pair forgotten in the middle of one story, and so he’d pulled out another.

“I trust and I hope,” he says, reflecting on what John will think when he finally sees the finished film, “that Elton goes, ‘OK, this is not some bullshit.’ “

At 9 years old, Fletcher was cast as Baby Face in Alan Parker’s Bugsy Malone, a 1976 gangster spoof that featured fellow child actors Jodie Foster and Scott Baio. At 14, he appeared in David Lynch’s The Elephant Man, and by 16 he was in the Royal Shakespeare Company. His childhood career was an education in taste and work ethic, but acting was his parents’ choice, not his, Fletcher says. And his youthful success made for a stressful upbringing. “When your mum and dad say, ‘We don’t have enough money to buy a boiler for the house, but you do’ — that gets complicated, because it’s not normal,” Fletcher says.

When he began to transition from child roles to adult ones, Fletcher felt out of his depth. Onscreen, he was convincingly playing a delinquent American teenager in Steven Moffat’s cult hit British TV show Press Gang, but offscreen he was floundering and running through his money supporting a growing entourage of deadbeats. “My answer was to get stoned, get high, sniff coke and fucking hang out with a load of people who were doing nothing,” Fletcher says. “I became unreliable at work, because I didn’t trust what I could do. I didn’t have any respect for myself, so I didn’t have any respect for my work.” 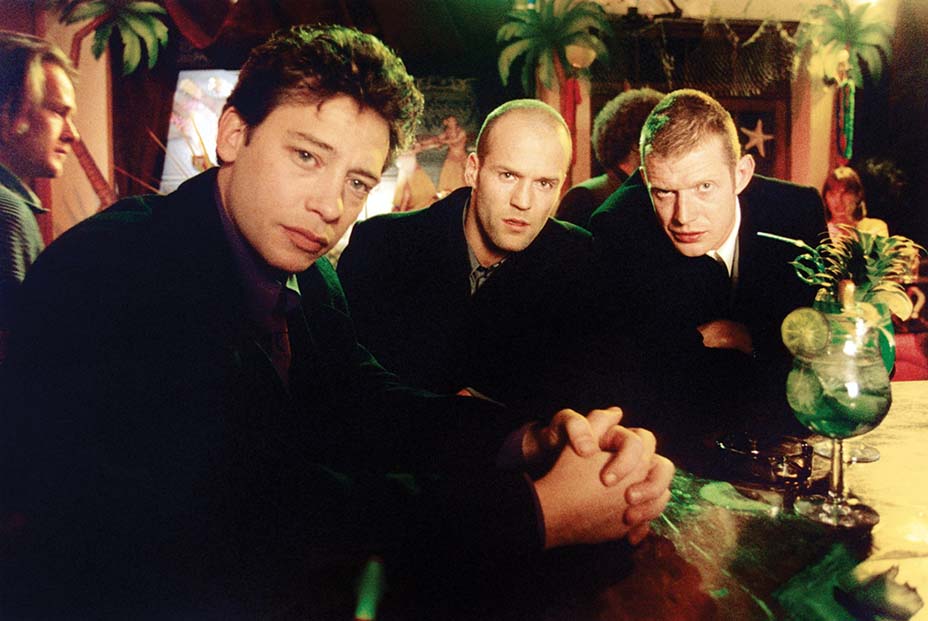 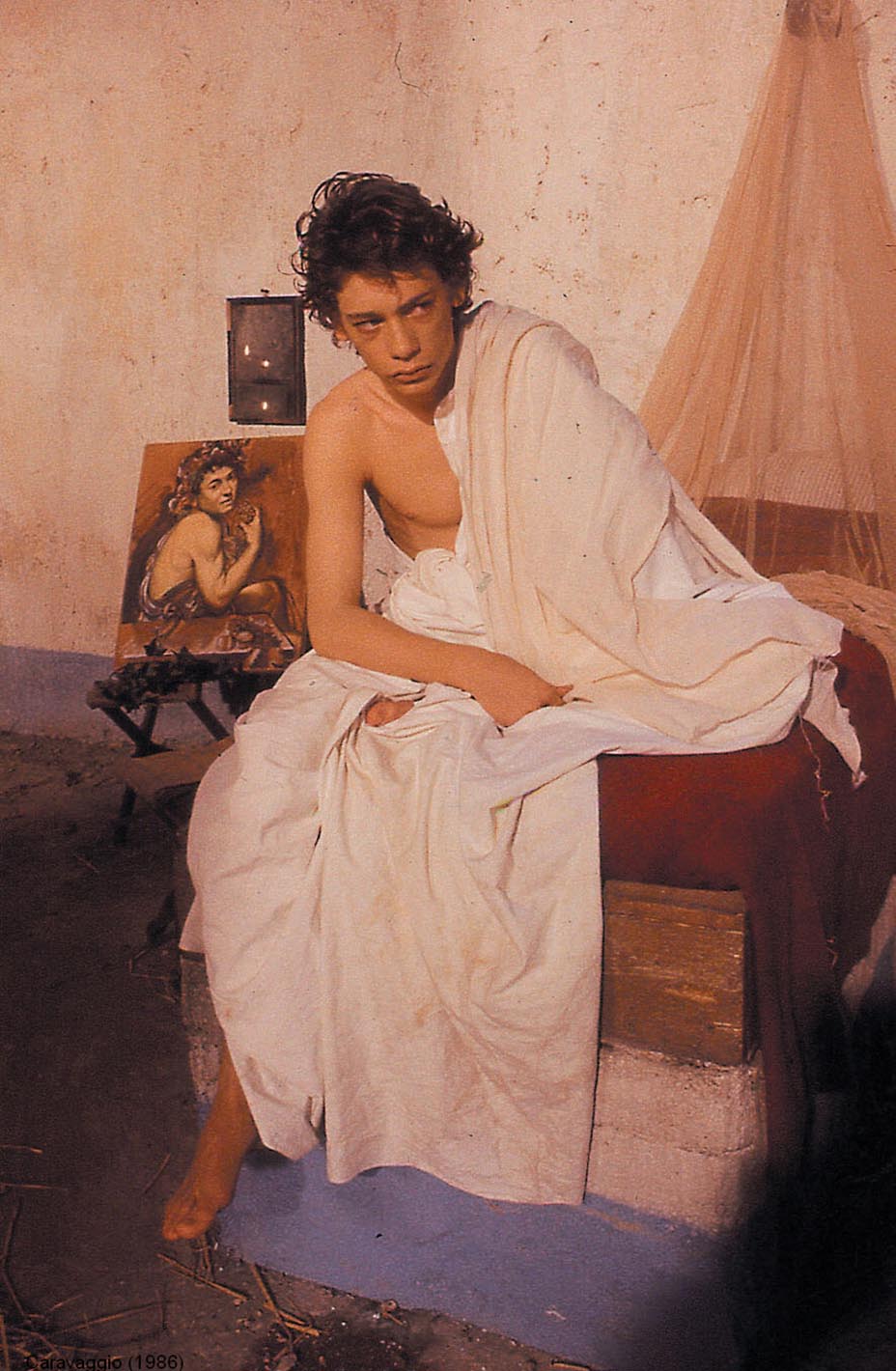 By the mid-’90s, after he had taken a depressing job hosting a TV show about video games, Fletcher declared bankruptcy and was forced to live in his car. Around that time, concerned friend Alan Rickman introduced Fletcher to Lithuanian opera director Dalia Ibelhauptait?, who cast him in one of her stage productions in London and became a steadying influence in his scramble toward sobriety. Ibelhauptait? assured Fletcher that it wasn’t luck but talent and moxie that had earned him steady work since he was 9. Fletcher and Ibelhauptait?, now 51, married in 1997 and live in Central London’s Clerkenwell neighborhood.

Soon after, Fletcher booked the role for which many Americans know him, as Soap, the level-headed, deadpan deliverer of scabrous Cockney dialogue in Guy Ritchie’s 1998 crime caper Lock, Stock and Two Smoking Barrels. “He’s a funny, clever and effortless actor,” says Vaughn, who produced that movie and developed a friendship with Fletcher over games of Three Card Brag on set, beginning a long working partnership that would see Vaughn cast him in films like 2004’s Layer Cake, 2007’s Stardust and 2010’s Kick-Ass. 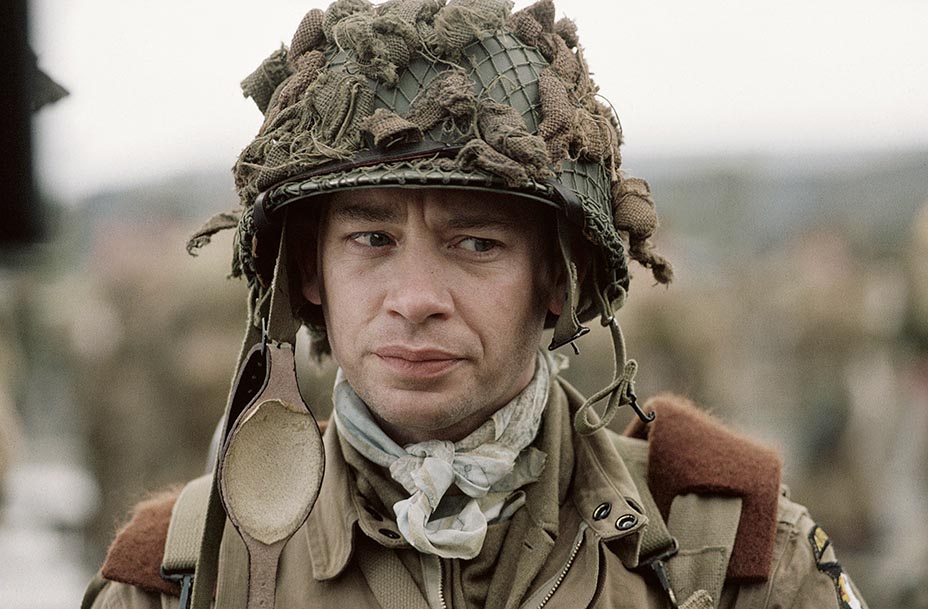 Fletcher began to write and direct short films and eventually his first feature, the $900,000 crime movie Wild Bill (2011), which won praise from critics but had only a small theatrical release. He followed that with Sunshine on Leith, a 2013 musical featuring the songs of the Scottish duo The Proclaimers, and in 2015 directed his first American studio film, Eddie the Eagle. The feel-good Fox movie, which starred Egerton as a British ski jumper, made a profit, but not a killing, collecting $46 million worldwide off a $23 million budget. “No one offered him a job after Eddie,” says Vaughn, who produced the film. “I was like, ‘This is crazy.’ People in Hollywood look at box office rather than talent.” 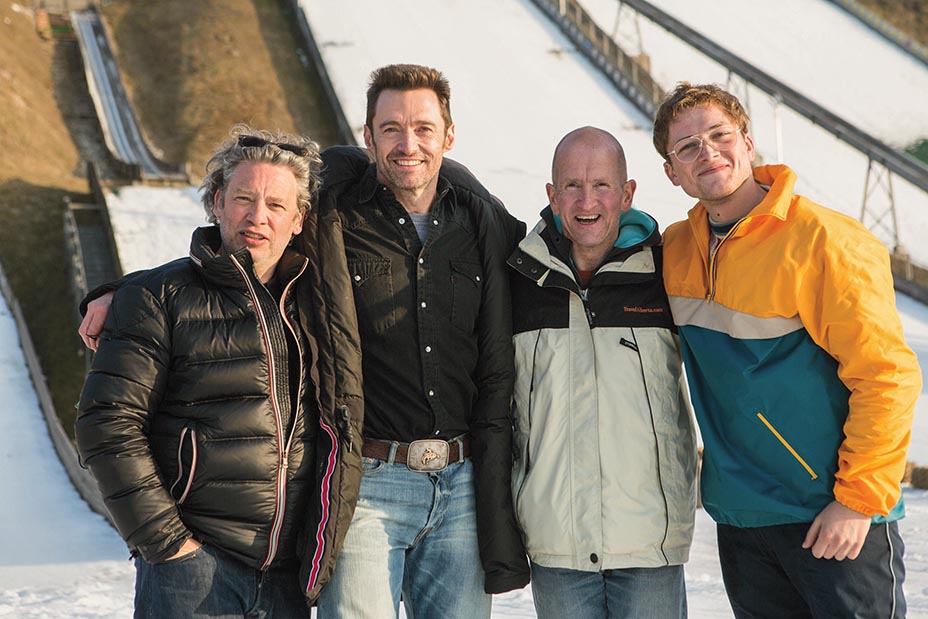 Fletcher did get hired again, in 2017, for Bohemian Rhapsody, but his pitch for the Queen biopic — with a script by The Road scribe Joe Penhall — had been darker than the one Fox ultimately greenlighted. “I was like, ‘It’s got to be R. It’s got to have fucking angst and be about an immigrant, a gay man, all the outsider values,’ ” Fletcher says. When Fox decided instead to make a PG-13 film that focused on the band’s rise, “It felt like a real boot in the teeth,” Fletcher says. “It was like, ‘The money’s not there. We’re not doing it.’ But look, just because you put all your heart into something doesn’t mean to say it’s right. They [Fox] were right, $900 million right.”

Some months later, Fletcher heard about Vaughn’s plans for Rocketman, to be produced by Marv Studios, Vaughn’s company that had made the R-rated Kingsman and Kick-Ass. He knew this would be the spit-and-grit musical he had missed out on. “Marv films are films that you go, ‘Oh, did that little girl just say “cunt”?’ ” Fletcher says. Initially planning to make Rocketman for Fox, the same studio behind Bohemian Rhapsody, Vaughn envisioned a kind of rock icon cinematic universe unfolding at the studio.

So when Singer’s set absences grew increasingly problematic for Fox, Watts called Vaughn and, as he tells it, said, “There’s been a bit of a ding-dong with Bohemian and could I come in and help?” The producer was inclined to oblige and watched existing footage. “Singer did a very good job,” Vaughn says. “He just hadn’t finished it. I said, ‘I’m not the man to finish it, but I know who is.’ ” Vaughn saw three weeks of mop-up duty on Rhapsody as the perfect gig for Fletcher. “I told Dexter, ‘This is going to be ’70s pop icon boot camp for you,’ ” Vaughn says. “It’d give him even more confidence when he went in to do Rocketman.” The job would involve shooting 30 percent of the movie, including scenes when Freddie Mercury celebrates his birthday at his parents’ dinner table and when the band writes “Another One Bites the Dust.” It would require a lack of ego, as Fox wasn’t looking for a director to put his own stamp on Singer’s work, and that was fine with Fletcher (he ended up with an executive producer credit). “I had Rocket, you see?” he says. “I had my new love, and I was happy.”

In the interim, while Fletcher was working on Rhapsody, Fox passed on Rocketman. But Paramount picked it up, with Fletcher attached to helm the 60-day shoot with more than 20 performances. “You know in five minutes that Dexter is the perfect guy to make a visually extravagant musical,” says Wyck Godfrey, president of Paramount’s motion picture group. “He just has a buoyancy. He is literally jumping up out of his chair.” As an actor, “Dexter knows exactly how to coax and encourage,” says Egerton. “He understands the seemingly unimportant things than are crucial for an actor to feel happy and settled. He knows my insecurities, and he knows my areas of strength and always makes me feel like I can do anything.” 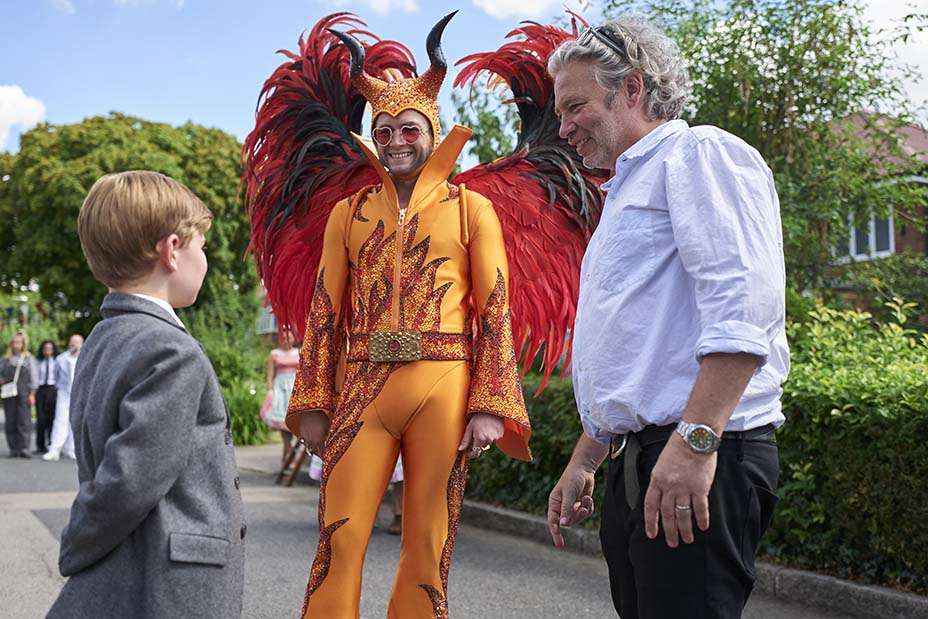 Paramount committed at the beginning to an R-rated Rocketman. “That was important to Elton,” Godfrey says. “Elton’s life is an R-rated life.” There was some back and forth between the filmmakers and the studio about one of the love scenes in the film, between Egerton and Richard Madden, who plays Elton’s former manager, John Reid. “It was a natural process of finding the right balance,” Godfrey says. “We looked at the drug use, language, sex scenes, and we had to tell the story clearly but not in a way that you start to push an audience away and not in a way that’s exploitative. Fletcher says he was ultimately happy with the finished scene between Egerton and Madden. “Irrespective of what other external forces say, it’s still gotta be my vision and my idea,” Fletcher says. “And I got to create a film that holistically works, so that people go on a journey. I have a moment of passion, and a moment of intimacy, and that’s what’s important. It’s handheld, and it’s close, and it’s about bodies, and prose, and excitement, the thrill of the moment. It’s sexy.”

While Fletcher had his head down making Rocketman, Bohemian Rhapsody was racking up awards and box office grosses. But for a while, it seemed as if the movie had directed itself. At the Golden Globes in January, when Bohemian Rhapsody won best drama, no one mentioned Singer or Fletcher in their speeches. (At the BAFTAs in February, Malek did mention Fletcher.) Of Singer, Fletcher says, “In the course of time, the truth will out. Whatever it is, it’s his issues. That shit doesn’t define what this shit is. What defines [Rhapsody] is Rami, that fucking music and the millions of people who go and love that film and see it.”

With Rocketman set to open, Fletcher is now front and center on a studio movie that is truly his own. He’s attempting to put the audience inside John’s story of rise and fall and rise again, a ride he has taken himself. “Hopefully people will watch it and go, ‘Well, OK, you can get through that,'” Fletcher says. “You can get through it. I’m still standing.”

'Rocketman' Takes Flight: Inside Taron Egerton's Transformation Into Elton John (and, He Hopes, a Major Star)