Continue to The Hollywood Reporter SKIP AD
You will be redirected back to your article in seconds
Skip to main content
August 7, 2021 9:15am

Movie audiences watching The Suicide Squad might be forgiven for thinking that the creature at the heart of Project Starfish is something so ridiculous that it had to come — in the words of the movie’s promotion — “from the horribly beautiful mind of James Gunn.” The reality is, however, that Starro has been part of DC’s comic book canon for decades … and is a villain that holds an unexpectedly important place in Marvel history, as well.

Starro debuted in 1960’s The Brave and the Bold No. 28, which was also the issue that introduced the Justice League of America to the world for the first time In the process, the comic caught the attention of Marvel publisher Martin Goodman, who told the editor of his own comic book line, Stan Lee, to think about jumping on board the superhero bandwagon once again.

In fact, compare the cover of The Brave and the Bold No. 28 to that of the result of Lee’s labors with creator Jack Kirby — 1961’s Fantastic Four No. 1, the comic that started the Marvel Universe as fans know it — and it’s easy to see the debts owed. Perhaps one could argue that, without Starro, there wouldn’t even be a Marvel Studios today. If you think of things that way, it’s long overdue that audiences could meet a big screen Starro. 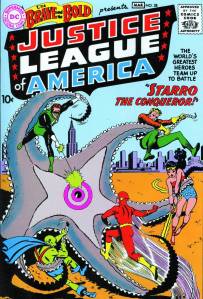 The comic book backstory for Starro is, of course, a somewhat convoluted affair. For the first three-plus decades of the character’s existence, it was assumed that Starro was “simply” a giant alien starfish that could control the minds of humans via miniature versions of itself that attached itself to their faces. As such, it was a threat to the Justice League of America in multiple forms, as well as Aquaman solo — it is a starfish, after all — and Captain Carrot and his Amazing Zoo Crew, of all heroes.

One of Starro’s greatest plans involved convincing the Justice League that it just wanted to go back into space, only to commit suicide while entering orbit, blowing itself up so that the resultant pieces would fall to Earth and be able to possess more people across a wider area. It was a moment of strategic genius that no one expected a starfish to come up with, even an alien one.

With each subsequent re-appearance, Starro would become that little bit more powerful, with more effort required to deal with the threat.

It was eventually revealed, in 1998’s JLA No. 23, almost four decades after his debut, that that version of Starro was itself just a miniature version of the real thing — and that the bigger version went by the more grandiose title of Star Conqueror; that version was so big that it managed to cover the whole of mainland Europe, giving it the ability to enslave the entire human race in one fell swoop. Don’t worry; it was eventually defeated by the unlikely partnership of the Justice League and the main character of Neil Gaiman’s critically acclaimed Sandman comic book series.

Most recently, Starro has undergone a couple of important transformations; in 2017’s Justice League: No Justice, it was convinced of the benefits of altruism, sacrificing itself to save others in the face of an invasion by the seemingly omnipotent Omega Titans. A tissue sample from his body was regrown by Batman, only to become a wannabe hero named “Jarro,” after his traditional home inside a jar. Whether or not this new attitude will remain in future appearances is unknown, of course — especially given his increased profile as a threat to all things good in The Suicide Squad.

Outside of comics, Starro has been around; it’s shown up in the 1960s The Superman/Aquaman Hour of Adventure animated series, as well as Batman Beyond, Young Justice and Teen Titans Go!. For video game fans, Starro has also been in Injustice: Gods Among Us, Batman: Arkham Knight, DC Universe Online and Infinite Crisis — not bad for an alien echinoderm, really. No wonder big screen stardom was awaiting, eventually.

Throughout all of the above, Starro — and even Jarro — have had a relatively consistent characterization: Somewhat chatty, more than a little self-obsessed, and easily overconfident. Even the Star Conqueror, who never spoke directly but commanded the captions of the story it appeared in, had no shortage of ego. That’s somewhat at odds with the experimented-upon Starro of the movie, which swiftly moves into revenge mode when given the opportunity, but, really: who could blame it, given the circumstance?

Next stop, obviously, is world domination. But this time, with more star power and less mind control.