Kumail Nanjiani was doing a stand-up show in Chicago in 2007 when he heard a female voice heckling him from the audience. “I was like, ‘Well, this girl is really cute,'” he remembers and later asked the woman out on a date. Amazingly, they hit it off. But since she turned out to be a Christian, and he’s a Muslim, he had to hide the relationship from his observant Pakistani parents — until she got sick and was put in a medically induced coma for eight days, prompting Nanjiani to buck tradition and declare his love.

If you had a meet-cute story like this one, you’d make a movie out of it, too.

Kumail Nanjiani and Emily V. Gordon on Why They Skipped an Emmys Afterparty: "Our COVID Boundaries Are a Lot Stricter"

Kumail Nanjiani and Emily V. Gordon on How AstraZeneca's New "Up The Antibodies" Campaign Centers the Immunocompromised Community

“The doctor’s first question was, ‘Does she have HIV?'” Nanjiani recalls of the nightmare. “I was like, ‘Uh, no. I don’t think so.’ He’s like, ‘Are you her husband?’ I was like, ‘No.’ And he’s like, ‘You need to sign this document. We need a family member, so I’m just going to ask you again, are you her husband? Because this needs to happen. Just say yes and sign it.’ And so I signed it, and then they put her in a coma.”

Those eight days of unconsciousness, during which her prognosis was uncertain, were rougher on Nanjiani than they were on Gordon — and they made him realize how much he had to lose. By the time doctors woke her up, he’d decided he wanted to marry her. Says Gordon, “I basically went into a coma with a pretty lovely, casual boyfriend and came out with a guy who was like, ‘Holy shit, I love you.'”

Originally, the couple saw their tale as a sweet, cross-cultural rom-com; their first draft played down the religious and racial friction their relationship caused their families, particularly Nanjiani’s. But Showalter, like many living in melting-pot America, brings his own interfaith history to the film and wanted to play up those tensions.

“My mother is Jewish and my father is an Episcopalian and they were married in the early ‘60s and her family did not approve of their marriage and she was excommunicated,” Showalter says. “I mean their story is my parents’ story. It hits very close to home for me.”

Showalter pushed to make the movie messier and more complicated. “Mike said, ‘I feel like there is a big thing you’re missing here, which is the experience of being a brown man in America,'” Nanjiani recalls. “He was like, ‘You’ve had racist stuff happen to you, right?’ I’m like, ‘Yes, of course.’ He was like, ‘I feel like a little bit of that needs to be in the movie.’ So we have a couple of little scenes that sort of speak to that. And now I think those scenes have unfortunately become more relevant and more resonant.”

Indeed they have. They shot the movie, which was fully financed by FilmNation, in New York in the summer of 2016, before Muslim registries had become a genuine political possibility. With Trump’s election, though, the film’s premise — a Muslim and Christian falling in love and marrying — takes on a more poignant cultural context. “This story would work regardless of the political era we’re in,” says Apatow. “But it certainly has some added resonance in this new environment, where we’re all a little nervous about the judgments of the new administration.” 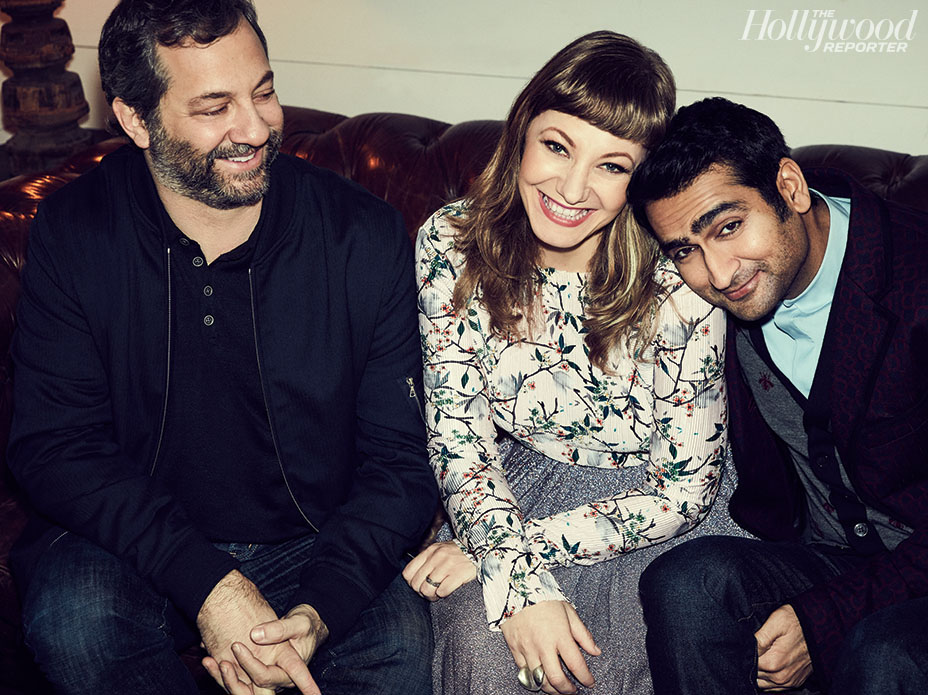 Ultimately, though, it’s still a love story about a true romance — or at least a mostly true one. Naturally, some liberties with reality were taken. It’s not in the film, but in real life, after Gordon was put in a coma, Nanjiani called his parents to confess the relationship. “They were totally supportive and nice,” he says, chuckling. “Until Emily came out of the coma. And then my mom was like, ‘What the f— are you doing?'”

Nanjiani’s parents have since accepted the relationship but are apprehensive about the film and have yet to see it (on the other hand, Gordon’s parents, played by Holly Hunter and Ray Romano, have watched it four times). “My parents don’t really understand my career,” Nanjiani explains. “They don’t really bring it up that much. But they visited the set of the movie because the guy who’s playing my dad, Anupam Kher, is a huge Bollywood star. When I asked my dad, ‘Hey, who do you want to play you?’ that was the name he said.”