“When your man is in a deep REM sleep, put a pillow over his face until he starts kicking,” jokes New York comic Aida Rodriguez during a recent set at the Comedy Cellar’s Village Underground. “Don’t kill him, but do it a couple of times a week so he is jumpy and scared,” the way women often feel around men. A former finalist on NBC’s Last Comic Standing, Rodriguez riffs on male-female dynamics in the #MeToo era, likening comedy to activism. “Stand-up is still one of the most sexist fields,” she says. “There are not many of us, so I’m going to use my platform.”

While the sexual scandals that engulfed comic legends Bill Cosby and Louis C.K. got all the press, #MeToo is also having a real impact on grass roots stand-up — at the New York clubs where much of the nation’s comedy is honed. Comics are changing their jokes, adapting to new audience sensitivities and trying to figure out how to behave with one another. “Women are more empowered now, both onstage and in the audience,” says veteran comic Christopher Titus. “The things guys used to say about them, women can now say back. Meanwhile, every guy checks himself a little bit. Manifest destiny is over.”

But many comedians avoid topical material and divisive topics altogether. Five women performed at Carolines in March in the Round of 16 of the club’s Comedy Madness competition — none delved into the issue. When Melissa Diaz does a bit about her vagina, it’s about discovering it at age 4 and making it sing show tunes. “I don’t gravitate toward political topics,” says Diaz, an up-and-comer in the midst of a stretch of performing in 16 different New York City clubs in four weeks, including a featured spot at Carolines as a Breakout Artist. “I’m introspective and my material is surreal and silly.”

Comedian and Roseanne co-showrunner Whitney Cummings has been uncertain how to approach #MeToo onstage. “We have to talk about the uncomfortable stuff,” she says. You want to be pro-woman, but “saying all men suck makes you look like an idiot.” 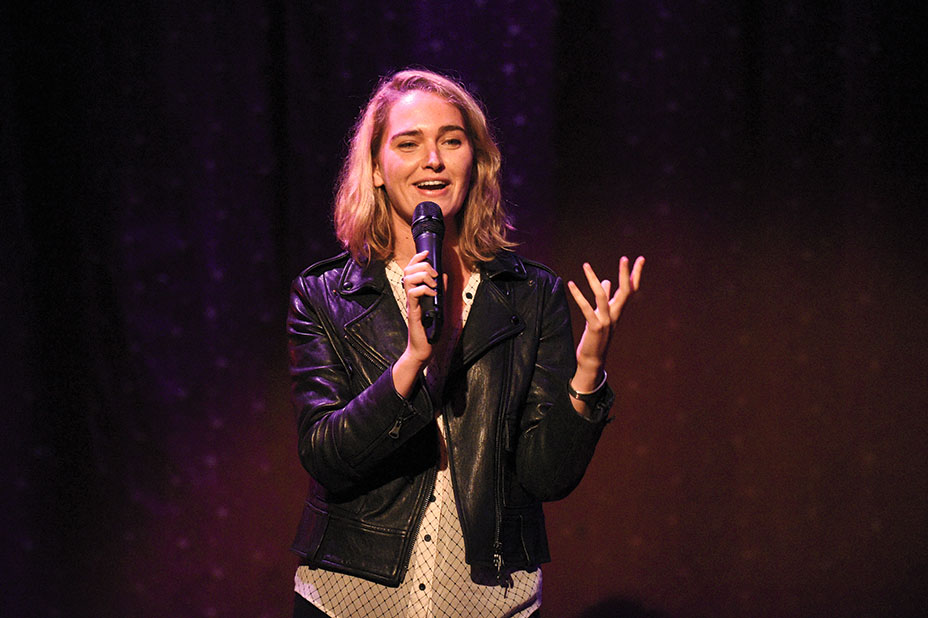 Still, Noam Dworman, owner of the Comedy Cellar (where C.K. was a regular), says he sees more women “feeling total freedom” to confront topics like harassment in their acts. And these routines are now finding bigger platforms. In February, comic and ex-producer of The Daily Show Jena Friedman’s Adult Swim special, Soft Focus, used comedy to talk about campus rape. And Friedman says late-night shows had long been “conservative about what comedians were allowed to perform,” are shifting too. In February, Conan gave her no restraints for a set that included numerous gender discrimination jokes with a political bent: “If you see a Nazi on the street, don’t punch him. Maybe lightly harass him, catcall him, tell him to smile. If any Nazis work for you, pay them less, take credit for their ideas — except that one. If we in America treat Nazis the way that we treat women, at the very least, they will never become president.”

For male comedians, broaching these subjects can be dicier, and audiences are less tolerant of misogynistic, objectifying or homophobic humor. Friedman says men now face “more of a minefield,” though she believes comics should be able to say anything born of “intelligence and humanity.”

Still, Louis Faranda, the executive talent producer for Carolines and the New York Comedy Festival, says comedy was already changing and that the most blatantly sexist and homophobic jokes had become less common than even 10 years ago, because “we are living in a different world and today’s comedians don’t find that funny, so they don’t write those jokes.”

Napoleon Emill, who performed at Carolines Comedy Madness, points out that Eddie Murphy’s infamous bit on a gay Mr. T would have drawn laughs well beyond the 1980s but that he couldn’t tell it today. “Comedy regulates itself,” Diaz adds. “It is always grounded in the context of its time.”

Not everyone has adapted — Dice Clay’s brand of misogyny still packs houses. Still, the reaction has changed. After Dave Chappelle made rape and trans jokes in his first two Netflix specials, Vulture called him “old and out of touch.” In another special he semi-apologized, but fanned flames by calling C.K.’s accusers “weak.”

Gilbert Gottfried says cracks about sexual issues can now harm a career, but adds, “I’d probably [still] make those jokes.” (Having landed in trouble for 9/11 and tsunami bits, he adds, “I’m not someone whose career path people should follow.”)

Ted Alexandro, who followed Rodriguez’s set at the Cellar, says “tasteless jokes about women have been the norm forever, with kind of a wink like, ‘You know I’m just kidding.'” Those aren’t dying quickly, but he hopes #MeToo eliminates “low-hanging fruit.”

Alexandro says male comics can take #MeToo issues seriously and still make jokes; he devoted a portion of his set to how men must change, including a risky joke about men learning to listen and stop confidently and obliviously interrupting, or “raping the conversation.”

But comic Sean Patton thinks it better to avoid #MeToo in his act. “It’s an opportunity for women to speak out about something that has been happening to them for a long time. They don’t need me man­splaining. I’m listening, that’s what I’m doing.” 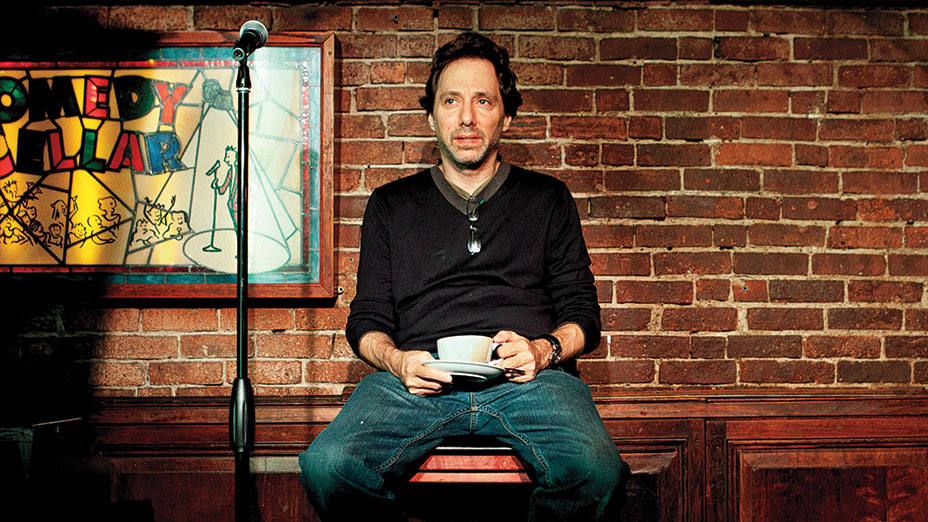 Both comics and club owners have also noticed a substantive #MeToo effect on audience reaction. Rachel Bradley, who opens for her husband, Titus, riffs on how women are called the weaker sex “but somehow find the strength to not jerk off in front of strangers.” Women used to laugh at material like this, Titus notes, adding “now they are standing and cheering.”

However, political correctness, already a growing concern in comedy — back in 2015, Jerry Seinfeld said he avoids college campus shows because students are overly PC — is being exacerbated by #MeToo. “Audiences err on the side of being offended, especially if they don’t get the joke,” says Gottfried. “People start hissing and booing without thinking.”

It’s not just male comics who are concerned. Gold worries about a potential “stifling” effect. An audience member once complained that her bit about “they and them” pronouns as they relate to sexual identity made that person feel unsafe. “You come to a comedy club to laugh and to think — great jokes make you do both — but not to feel safe. They weren’t even listening to the intent.”

Matt Bachus, a newcomer whose set at the Comedy Madness event included a dick pic joke, tries not to censor himself, but he does edit more carefully now. “I talk with my fellow comics about whether they think a joke goes too far,” he says. “You have to be careful because certain buzzwords trigger a reaction and can take over a joke so people aren’t listening anymore.”

KC Arora, who performed twice at Carolines last month, says “words carry weight and you can hurt your set if you’re not careful.” but he disputes the idea that this is all political correctness. “Audiences are not more sensitive, they are just more aware.”

Of course, some audiences don’t want to hear about women’s empowerment, Rodriguez says, adding that a man recently walked out during her set. “I’m not here for that guy,” says Rodriguez. “Most audiences are woke or at least open to listen. Comedy is about getting people outside your own group to laugh.”

And Titus says the change in audiences is a good thing. “Our job is to bang against what’s accepted and sometimes to offend people, but 99 percent of the time you should be on the right side of humanity,” he says. But eliminating jokes that objectify or demean women is not being PC, he adds. “If you do derogatory jokes and get booed it’s not because of political correctness– it’s because you kind of suck.” 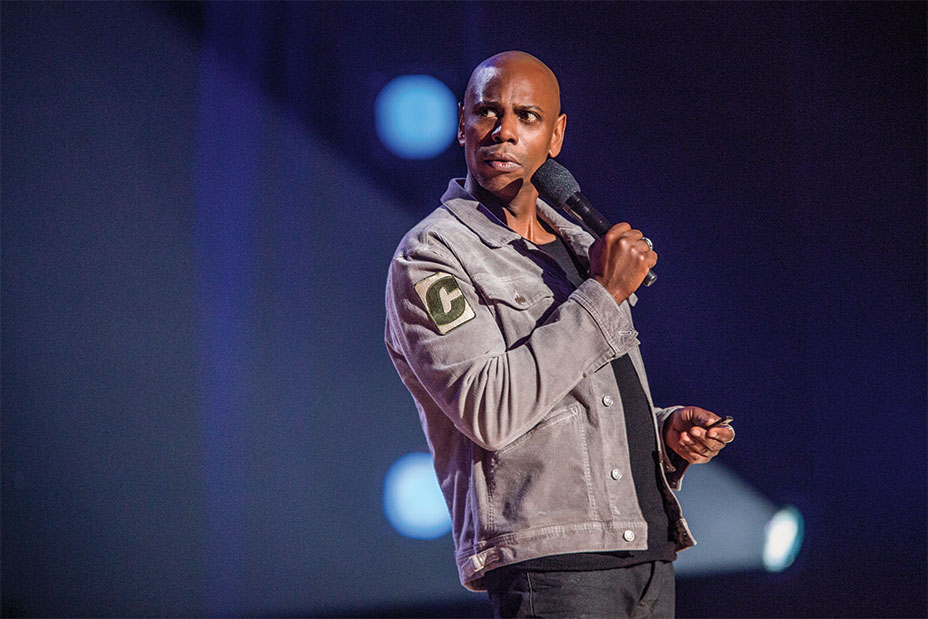 Offstage, comics are talking about #MeToo, but cautiously. Gold says after the revelations about C.K. many comics grew nervous about what they could and couldn’t say or do around female comics and would seek out her or other women to find out what was inappropriate.

Many men are self-conscious in conversation, Dworman agrees, and while he knows that a lot of comics felt Aziz Ansari was treated unfairly in the public accusation of his poor behavior on a date, he says they are loath to offer strong opinions anymore.

“When I saw one well-known comedian last fall, I asked, ‘What do you think of what happened with Louis C.K.?'” Dworman says, “and he responded, ‘What do you think about it?’ because he was scared to venture an opinion.” He says many comics are nervous about what they say around female comics, and one performer will now communicate only via phone, for fear of writing the wrong thing in a text or email.

Meanwhile, Rodriguez has seen some resentment from men, who say things like, “Now you can’t even cough around a woman.” However, she adds that a few, like Alexandro, have gone out of their way to be encouraging. Diaz says even before last year she found most of her male peers “very supportive and respectful.”

Both Carolines and the Cellar are relying on improving communication rather than new policies. “I talk about treating everybody with respect all the time,” says Faranda. “I am someone who hugs, and I have been reluctant to do that, that’s how afraid I am.”

Comics and bookers agree harassment is worse on tour. “There is still a big void booking women on the road, even though women are often the majority of the audience,” says Rodriguez. “While some men are policing themselves more backstage, the disgusting pigs remain disgusting pigs.”

Arora points out that those clubs are still run by the same people. “Social change is slow,” he says. “We have a long way to go.”