The drinking song “99 Bottles of Beer” has nothing on Dan Aykroyd’s Crystal Head Vodka — at least at AMC Theatres. By Aykroyd’s count, the cinema chain has sold 110,000 special Ghostbusters cocktails since last summer using the vodka, part of a campaign by AMC to boost earnings by hundreds of millions of dollars with increased alcohol sales. “It’s been amazing,” says Aykroyd. “Overall, they’ve bought 7,200 bottles from us.”

Forget popcorn and Milk Duds. Booze is the next step in cinemas’ fight against flagging attendance. For decades, local and state laws prevented movie chains from offering alcoholic beverages in regular auditoriums. Only dine-in theaters could offer booze by securing a restaurant liquor license, while some high-end cinemas — including the Landmark and ArcLight in L.A. — offered beer and wine in designated 21-and-over auditoriums. During the past two years, 32 states have relaxed their laws, allowing theaters to serve alcohol in any auditorium.

“It is the fastest-growing amenity in our industry,” says George Patterson, senior vp food and beverage at AMC. “Dollar for dollar, alcohol doesn’t cannibalize candy, soda or popcorn. If I put a bar in, I can almost guarantee my food and beverage revenue will go up. Over 70 percent of our guests are over the age of 21.”

When Patterson joined AMC six years ago, only six locations offered spirits. By the end of 2016, 178 had lounges and bars. Of those, 150 were stand-alone bars not paired with a dine-in component. Exhibitors don’t release revenue numbers from alcohol sales, but AMC — the nation’s largest chain and market leader in this arena — estimates the average customer spends $4.81 on concessions. That figure rises by 30 cents in locations with a bar. The markup means huge profit margins: At the AMC Santa Monica 7, a glass of Clos du Bois chardonnay runs $14, compared with $11.99 for a bottle at BevMo.

Concessions, long the biggest profit center for movie houses, are becoming more important as attendance numbers remain flat or decline. In 2015, AMC’s food and beverage revenue hit about $910 million, a 41 percent uptick from 2010 ($647 million). Those 2015 revenue numbers are even sweeter considering the cost of concessions was just $129 million. Regal also reported increased food and beverage revenue of about $910,000 in 2015, compared with $724,000 in 2010.

But one of the biggest moviegoing markets still is dry: New York. Since 1934, a provision of the state’s constitution has banned the sale of alcohol in movie theaters thanks to the lobbying efforts of Broadway theaters. Dine-in cinemas, such as the new iPic in Manhattan’s Seaport neighborhood, are the only exception. That soon could change. On Jan. 20, Gov. Andrew Cuomo inserted a provision in his budget allowing the sale of liquor in theaters. “When you go to see Hamilton, you can buy a glass of beer or sip on a glass of wine, but if you go to a regular movie theater, you’re out of luck,” explains William Crowley of the New York State Liquor Authority. “We license places like Madison Square Garden and Yankee Stadium. Even Chuck E. Cheese has a liquor license. Movie theaters are a little pinched right now and have invested a lot in seats, screens and sound.” 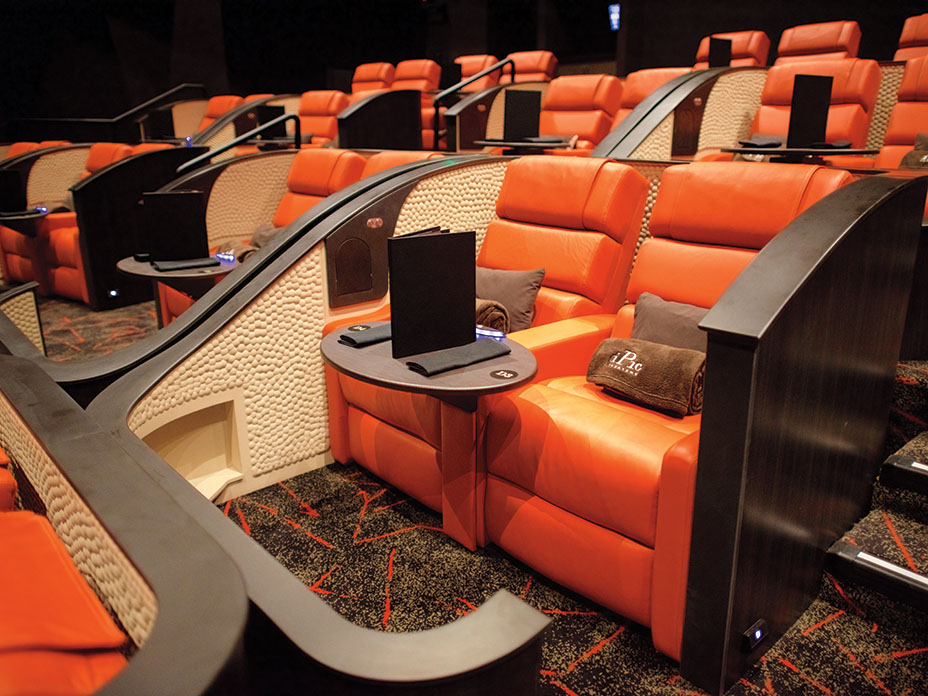 Theater owners are trying to remove a stipulation in Cuomo’s proposal that would prohibit the sale of alcohol to anyone seeing a movie rated PG or G, something no other state has done when loosening its laws. “We’ve never had one incident involving alcohol,” says iPic chief Hamid Hashemi. His colleagues at other circuits insist the same and proffer that on average, a customer buys just one drink per visit.

AMC’s latest campaign is to partner with Hollywood studios on themed drinks, some from celebrity liquor brands by Aykroyd, P. Diddy and Justin Timberlake. AMC and Cinemark will sell a Fifty Shades cocktail over Valentine’s Day weekend, when Universal opens Fifty Shades Darker. “We’ll be offering an espresso martini and a darker marguerite,” says Cinemark executive vp food and beverage Phillip Couch. “If you aren’t in this space, then you are not providing the experience some people want.”