[This story contains minor spoilers for A Quiet Place.]

Writer-director John Krasinski has enjoyed unlikely success with A Quiet Place, a film he thought would be a once-in-a-career experience.

The largely silent horror film about a family trying to survive in a world dominated by sound-hunting monsters earned $334.5 million globally and has emerged as a surprise Oscar contender. Paramount quickly greenlighted a sequel, but Krasinski did not expect to be involved, telling his wife and co-star Emily Blunt that he preferred to leave it as a special experience they shared together.

“That was my intention for the movie itself,” Krasinski said Wednesday during Q&A at the Silver Screen Theatre in Los Angeles. “Then I had this small idea for a sequel, but I didn’t think it would go anywhere. So, I said to the studio, ‘Just go do the movie with somebody else.'”

Krasinski’s idea kept growing, even as Paramount entertained pitches from other filmmakers.

“They heard some pitches, and I told [producer] Drew [Form] about this little idea,” said Krasinski. “And he told me to think about it a little longer. And then I thought, ‘This might really work.’ So, I’m currently writing the sequel.”

When developing A Quiet Place, Krasinski pushed to cast a deaf actress in the role of his onscreen daughter and found her in Millicent Simmonds.

“I didn’t just want the performance to obviously be authentic, I wanted someone to guide me,” said Krasinski. “She comes from a family where everyone else can hear, so I said, ‘What does that feel like?'”

Simmonds’ mother told Krasinski that the young actor could hear very low levels of sound; she might not hear your voice, but she could register a loud bang. Krasinski tried to recreate her experience in the film during segments told from her character Regan’s point of view. That decision led to an emotional moment when Simmond’s mother first saw that footage during ADR. 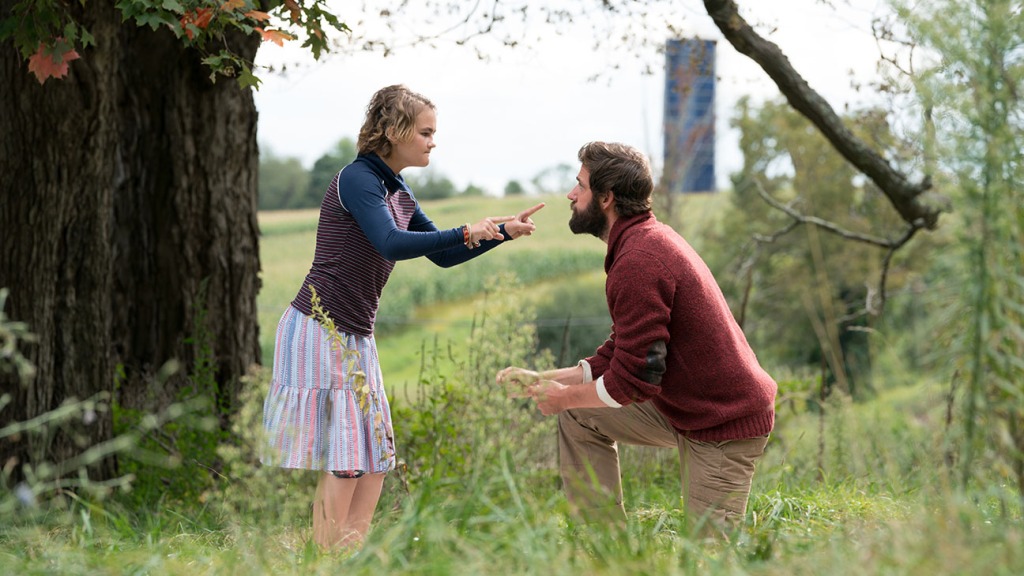 “I said, ‘Just so you know, what you are going to see in the movie is based on the story you told me, so when we go into her head, I did the best I could to imagine what Millie can hear,'” recalled Krasinski. “And watching her mom sort of cry in that moment, she said, ‘I’ve always wondered what it would be like to be my daughter, and you finally delivered it for me.'”

Added Krasinski in a joking (but not joking) way: “And I cried hard.”

A Quiet Place was written by Bryan Woods and Scott Beck, who sold it to Platinum Dunes partners Form and Brad Fuller. After the producers got Krasinski on board, he performed a rewrite that changed how the film opened. In the original script, the death of the family’s youngest child happened in flashbacks, but Krasinski pushed that to the forefront, writing a new sequence to introduce their world.

“In the spec screenplay that we bought, page one, the family was dropped into the farm,” said Form, who appeared on the panel alongside Krasinski and Fuller. “And that’s where the movie started. As you see here [in the actual film], the first 12 minutes of the movie starts in the pharmacy, out with the boy walking. So when we received those first 12 pages, it was such a gamechanger on how to start this film. If we didn’t have those first 12 minutes of the movie, I don’t even know what the movie is. It really changed the entire thing.”

Krasinski also conceived of a backstory for where the sound-hunting creatures came from, imagining them as originating from a planet where there is no light, having evolved to be perfect killing machines. Apparently, they came to Earth via a meteor, yet none of this is referenced in the film, other than on the board Krasinski’s character keeps in his basement.

“I have the whole backstory, I know exactly where they’re from and what day and where it happened. But I want to only tell it on this board,” he said.