“They had to turn people away,” marveled Christine La Monte, a longtime member of the Academy of Motion Picture Arts and Sciences’ public relations branch, when I reached her on Sunday to discuss the first official Academy screening of Bradley Cooper‘s A Star Is Born for L.A.-based members. It took place Saturday night at the Samuel Goldwyn Theatre — which seats 1,010 — inside the organization’s Beverly Hills headquarters. La Monte emphasized, “I have never seen that — ever.”

Academy members — lured out on a weekend evening not only by the much buzzed-about film, but also by the promise of a post-screening Q&A with its talent  — were warned ahead of time on the Academy’s website that, “DUE TO ANTICIPATED HEAVY ATTENDANCE, MEMBERS MAY ONLY BRING ONE GUEST,” as opposed to the multiple guests usually permitted. The turnout was still massive, with people lining up as early as 5 p.m. for the 7:30 p.m. screening. “The line went from the front door [on Wilshire Boulevard] up La Peer [Drive], all the way to the next street over, and it just kept growing and growing,” said David Magdael, also of the PR branch.

“I was surrounded by people who I rarely see there,” said documentary branch member Mitchell Block, a regular at the Academy’s weekend screenings, who added: “This is the first ‘sold-out’ [admission is free for dues-paying members and their guests] picture this year that I’ve attended.” Another member who says he is also there almost every weekend, and who asked not to be named, cracked, “It was the High Holy Days of screenings: the once-a-year members [as in, people who usually stay home and watch Oscar hopefuls on screeners] showed up.” He added, “I call them ‘the walker set’ — I have never seen so many old people at an Academy screening.” 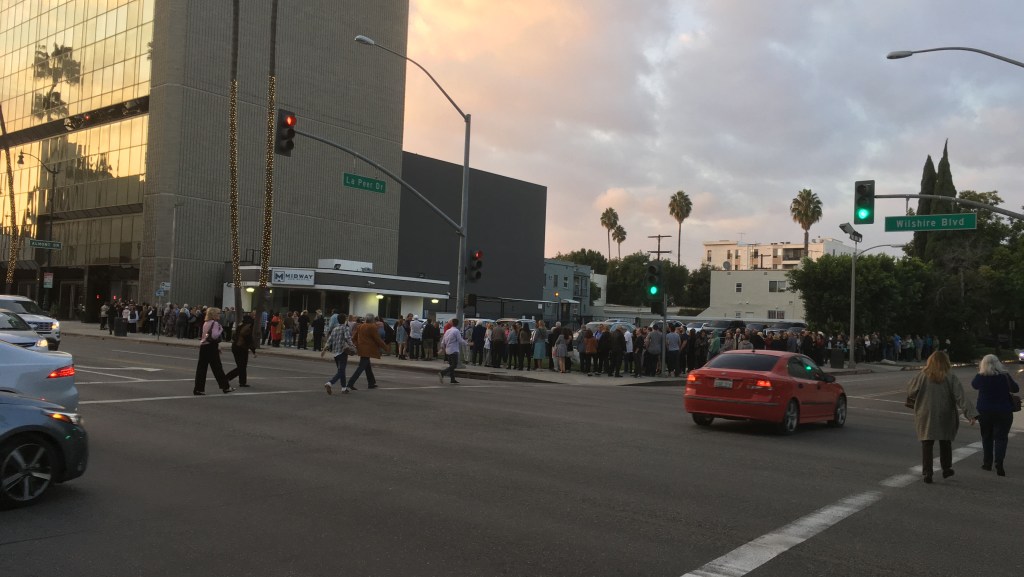 Academy members lined up around the block ahead of Saturday night’s screening in Beverly Hills.

A half-dozen Academy members who attended Saturday’s screening and then spoke with THR on Sunday all agreed that the film played extremely well — but not through the roof to the extent of some recent films. “Although the response was very, very warm, I was a little surprised there was no standing ovation,” said Bruce Feldman, another member of the PR branch, who noted that Spike Lee‘s BlackKklansman was accorded one earlier this season, as was Damien Chazelle‘s La La Land two seasons before. “I think people were probably still processing it,” suggested Magdael, “but everyone around me stayed for the Q&A.” And, adds La Monte, “The applause went on for a long time — during the credits, when they [the talent] came on stage and at the end of the Q&A.”

Magdael said the Academy screening actually marked his second viewing of the film. “I was all set to hate it because of the trailer, plus I’m not a Gaga fan, even though they may take my ‘gay card’ away for saying that,” he said with a laugh. “Then I saw it at the Cinerama Dome [in Hollywood] and, from the first frame on, I was in.” Magdael says he was particularly impressed by the songs, the performances and Matthew Libatique‘s cinematography. “The close-up shots of the two of them [Cooper and Lady Gaga] really helped the chemistry,” he suggested, noting that Libatique also lensed the film that topped A Star Is Born at the box-office this weekend, Venom.

“I enjoyed it a great deal,” volunteered Feldman. “I loved it,” gushed La Monte. “I thought it was really stunning — Bradley is so incredible. It reminds me of [the 1990 film] Dances With Wolves. I was the head of publicity at Orion when Kevin [Costner] jumped into directing with that one, and all of a sudden there was a brilliant movie [which the Academy rewarded with best picture and best director Oscars, among others].” She added of A Star Is Born, “The direction, the cinematography and the editing [by Jay Cassidy] all were so beautiful. The music is outrageously stunning — some of the songs are instant classics. And I thought Bradley was a genius with the way he inhabited that role — the chemistry he had with Lady Gaga was really remarkable.”

Mitchell Block of the documentary branch was a bit less bowled-over. “I just felt that the filmmakers took the [Kris] Kristofferson and [Barbra] Streisand picture [the 1976 version of A Star Is Born] and recast it. I thought it was better than that one, but ultimately they didn’t markedly improve on it. The director just isn’t there yet.” Block did emphasize, “Jay Cassidy’s editing is phenomenal. The performances were great — Lady Gaga is such a talent. There’s nothing in the picture that’s bad — it’s a perfect ‘Hollywood movie.’ But the script is not terribly impressive. If you want a film about music and self-destruction that’s great, look at [Bob Fosse‘s 1979 classic] All That Jazz.”

A lot can ride on official Academy screenings — even though the organization now is comprising some 9,000 members spread all around the world, and only about 500 could have been at Saturday’s screening (since most attend with a guest). “For Bradley, I suspect this screening was more important than any festival screening [A Star Is Born previously screened at the Venice and Toronto film fests] because it was his peers in the audience,” La Monte speculated. She noted that after the Q&A — which featured Cooper, Libatique, supporting actor Sam Elliott, costume designer Erin Benach and production designer Karen Murphy, and was moderated by Dave Karger — members rushed to the foot of the stage, and Cooper stuck around to greet all of them. “He talked to people and seems like such a great guy,” she said. “I think people are rooting for this movie. Everyone who I know is, at least.”

However, another member, who asked not to be named, had a gripe: “I was very disappointed that Lady Gaga wasn’t there — as great as Bradley Cooper and Sam Elliott were, she is the center of the movie.”

The bottom line? “I think it could get as many 10 nominations,” Feldman prognosticated. Added Magdael, “Judging from that crowd last night and all the people buzzing and crying around me, they’ve got a good shot [at best picture].” La Monte summed up: “I’m really sorry for anyone who wasn’t there because it was one of those moments when everyone was hoping for some great magic to happen — and it happened!”

Saturday’s Academy screening in L.A. followed another screening of A Star Is Born for the smaller, but still sizable contingent of Academy members in New York. That one took place at the Museum of Modern Art’s 125-seat Celeste Bartos Theater on Thursday. “They had to open a second room for overflow — which got filled too,” Gotham-based PR branch member Stu Zakim, who was in attendance, told me. “In 22 years, I’ve never seen that situation.” Members were told that they could not save seats for others who had not yet arrived, which led to bickering. “It got pretty f—g intense,” Zakim says with a laugh.

“Obviously, the interest was increased because you did have Gaga there [along with Cooper and Elliott] for the Q&A,” Zakim notes. (Rolling Stone‘s Peter Travers moderated the post-screening conversation, audio of which was piped into the overflow theater.) As for the audience’s response? “There wasn’t a standing ovation,” he acknowledged, “but there was really strong applause immediately. The level of enthusiasm was really high. And then the audience went nuts when the talent came out. It was a love-fest — she [Gaga] was getting teary and choked up talking about him [Cooper].” On a personal note, he added, “I really enjoyed it — I found it very entertaining. I thought she was amazing, and he was excellent. Right now, I would think it has very positive buzz — the most of any [2018] movie so far.”

Why Bradley Cooper Wanted to Remake 'A Star Is Born'

Why Bradley Cooper Wanted to Remake 'A Star Is Born'