[This story contains spoilers for A Wrinkle in Time.]

A Wrinkle in Time, the new film based on the Madeleine L’Engle novel, doesn’t quite feel like the other movies that make up the yearly slate for Walt Disney Pictures. While it’s a live-action blockbuster with plenty of CG effects and a handful of big-name actors, Wrinkle still has the singular feel of having been brought to life by a director who fashions herself as more of an auteur than a journeyman. Such is the case of Disney wisely hiring Ava DuVernay to direct A Wrinkle in Time, seemingly allowing her a bit more creative freedom than might be the case for other filmmakers.

This movie, in which a 13-year-old, her adopted brother and a classmate travel through space and time with three supernatural figures to find her father, represents a barrier being broken for Hollywood. DuVernay, in helming the big-budget film, is the first woman of color to direct a live-action film with a budget of more than $100 million. After the success of her 2014 period piece, Selma, as well as the recent Netflix documentary 13th, coupled with her well-liked social media presence, many fans and industry watchers have wondered if DuVernay would next make the leap to franchise filmmaking, her name being bandied about as a possible choice to direct a new Marvel or Star Wars film. While Wrinkle is a budgetary leap from even Selma, which only cost a reported $20 million, it suggests a director who is able to keep her interests visible even in the middle of constructing an epic-scale adventure.

Not every choice in A Wrinkle in Time works out in DuVernay’s favor; some of the creative decisions are carried over from L’Engle’s novel, which has sparked the imaginations of readers for decades but has also been considered unfilmable for a number of reasons. This adaptation is able to translate the journey from page to screen decently enough, though there are some hiccups. (Conceptually, putting Reese Witherspoon, Oprah Winfrey, and Mindy Kaling together as the supernatural trio that helps the young heroes of the story is a great idea. In execution, they fall a little flat, with Winfrey shining brighter than the others.) But many of DuVernay’s choices, and the way that she visualizes the warped worlds where the kids travel, are remarkable because they suggest a level of detail, care and interest absent from many costly cinematic affairs. 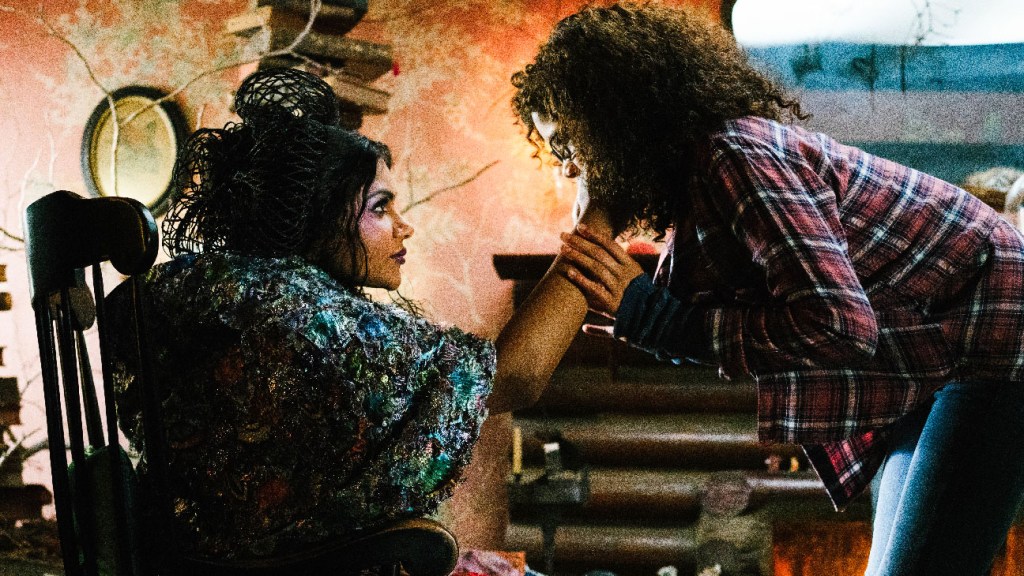 Most importantly, DuVernay has clearly approached the project with a personal connection and undeniable emotion. The heartbreak at the core of the story is the anchor that makes this Wrinkle work as well as it does. The protagonist, Meg Murry (Storm Reid), refuses to believe that her father (Chris Pine) just left his family behind four years ago; by the climax, she learns that she was right to keep the faith, because her dad was kept captive by an alien intelligence that represents the darkness of the galaxy. The scene where Meg and her father reunite is the film’s high point, and one that was no doubt imbued with DuVernay’s recent past. A recent profile of the filmmaker mentions that she lost her stepfather, whose first name was Murray, just as she was about to work on Wrinkle. Knowing this detail only emphasizes the tenderness of the reunion; many fantastical events fly by sometimes without comment, but DuVernay lets the reconnection between father and daughter linger tearfully, making the moment even more powerful.

Leaving aside the emotional angle, there’s enough on the technical side of the way that A Wrinkle in Time was put together that suggests more than a functionary behind the camera. Tobias Schliessler’s cinematography relies on close-ups even though the characters are traversing through fantasy worlds. The decision to let the actors’ faces be an anchor throughout isn’t always successful — there are times when it would be more exciting to see what the characters are seeing, as opposed to their faces in extreme close-ups — but it often leans harder on the emotional side of things as opposed to the story’s intellectual foundation.

If there is an extra-textual throughline to A Wrinkle in Time, it’s embodied in elements like the camerawork: There are clear, active decisions occurring behind the lens here, in ways that are rarely evident in big-budget fare. Another filmmaker might have leaned much, much harder on CGI to bring to life the worlds where our heroes find themselves. There’s likely another version of this movie that’s less odd, that’s more straightforward, more predictable and more lifeless. But  DuVernay, given the option to make a high-budget genre spectacle, has gone down a different path, a lot like her longtime friend Ryan Coogler did with Black Panther. Even when working with a major studio and a major property, she has made a movie that’s completely hers, flaws and all.

The Brightest Star of 'A Wrinkle in Time'