Before he arrived at the Governors Awards on Sunday night, Sam Elliott had to cross a police barricade in his tuxedo and pick up some propane. Like many of his fellow Californians, Elliott had just rode out a frightening wildfire in his home in Malibu, where he and his wife, Katharine Ross, stayed and poured water on their property, watching as flames consumed their neighborhood.

Their house survived, but to head from burned-out Malibu to the black-tie dinner at the Ray Dolby Ballroom at the Hollywood & Highland Center — where the Academy of Motion Picture Arts and Sciences conferred its honorary Oscars — was, the A Star Is Born actor told The Hollywood Reporter before the ceremony began, “surreal.”

The purpose of the 10th annual Governors Awards was to honor some cinematic greats, but the wildfires were on many people’s minds. The red carpet was scaled down, and Academy president John Bailey opened the evening with remarks about the catastrophe. “Many thousands of our fellow Americans are homeless. Nearly 1,400 people are still unaccounted for,” Bailey said. “Some of our own history was lost in the same fire, at Paramount Ranch, home to the Academy’s summer screenings of silent films.”

The evening’s honorees included Cicely Tyson, 93, whose groundbreaking career spans from the movie Sounder to Fried Green Tomatoes to The Help; composer Lalo Schifrin, 86, who wrote the scores for such films as Cool Hand Luke, Dirty Harry and Rush Hour and wrote the theme for the television series Mission: Impossible, a signature of the more recent film franchise; and publicist Marvin Levy, whose four-decade partnership with Steven Spielberg began on the 1977 film Close Encounters of the Third Kind and led to him working on the publicity campaigns for such films as E.T. The Extra Terrestrial, Schindler’s List and Lincoln.

The Academy also presented its Irving G. Thalberg Memorial Award to married producers Kathleen Kennedy and Frank Marshall, a duo whose shared legacy includes the Bourne films, Munich and The Sixth Sense. Kennedy, who stepped down from their company Kennedy/Marshall in 2012 to become president of Lucasfilm, is the first woman to receive the Thalberg since the Academy created it in 1937.

Tyson’s acceptance speech was particularly emotional, with director Ava DuVernay introducing the actress as “the seed for so many of us, the rose that we adore.”

Of learning that she would receive the honor in a phone call from Bailey, Tyson said, “I could not say a word, and I have to tell you I don’t recall ever receiving any information that sent me into such Niagara Falls. I cried and cried and cried.

“Mom, I know you didn’t want me to do this [acting], but I did and here it is,” Tyson said, holding her statuette. “For the longest time, I wanted to hear something positive from her. When I did [the Emmy-winning TV movie] Jane Pittman…she said, ‘I am so proud of you.’ If I had not heard those words from her, none of this would make a difference to me.” 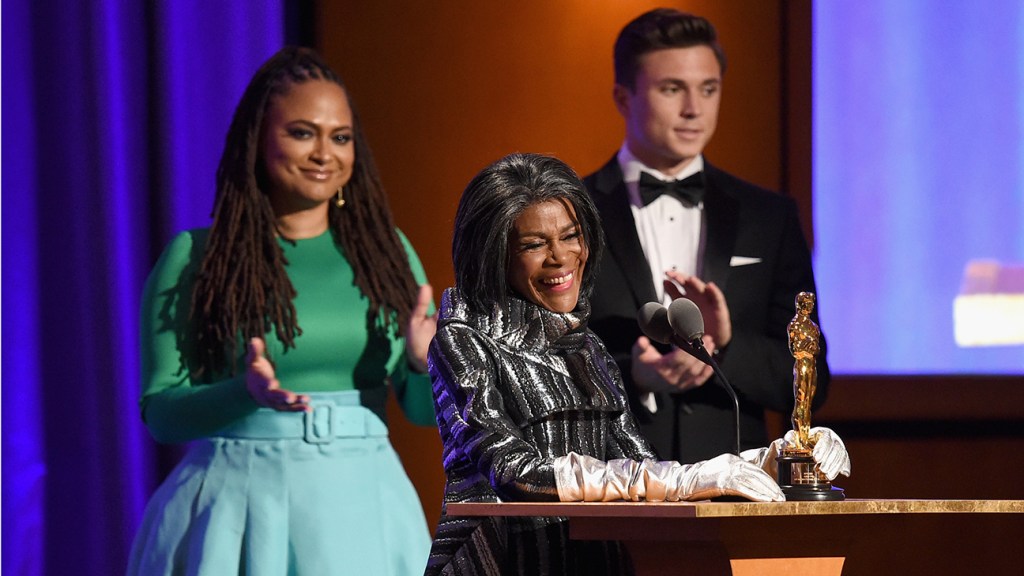 Spielberg introduced producers Kennedy and Marshall as “my forever friends, the inseparable, the indomitable,” citing the many films they’ve made together, “until one day I walked into my office and saw the two of them making out on my couch. We were still three but they were two…. I couldn’t be prouder to be their third wheel.”

Kennedy laughed off the couch story and declared herself “very proud to be the first woman to receive the Thalberg, but not the first to deserve it and definitely not the last.”

Kennedy’s speech became an endorsement of the Academy and the entertainment industry’s drive for the “inclusion of powerful new voices.” “As our industry grows and changes, who gets to tell their stories needs to change as well,” she said.

Rather than offer up a speech in praise of Schifrin, Clint Eastwood cut his remarks short, saying he would “like to ask you a few questions” and beckoning Schifrin to the stage, as the Mission: Impossible theme played. The duo launched into an impromptu patter about their shared love of jazz, including records once forbidden in Schifrin’s native Argentina. “We’re both jazz nuts,” Eastwood said. As Eastwood lingered during Schifrin’s own acceptance speech, the composer quipped, “He’s worried I’m going to compete with him as an actor,” before declaring, “Receiving this honorary Oscar is a dream. It is a mission accomplished.” 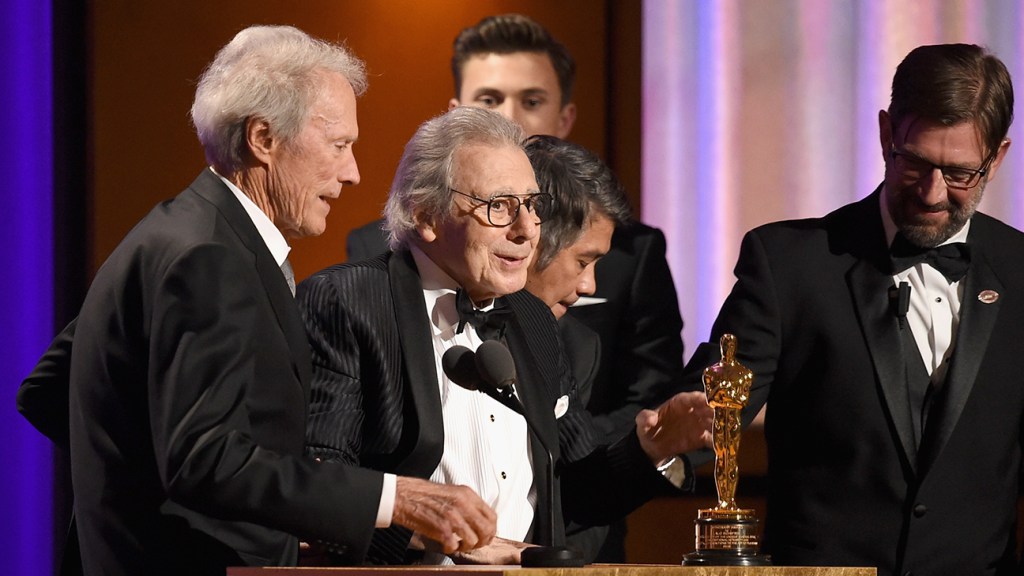 “I find it hard to believe this is actually happening,” Levy said. “This is the first time the Academy has considered one of us [a publicist] for an award.  [To people outside the industry], I could never explain what the job entails, but at least now, I got an Oscar for it.” 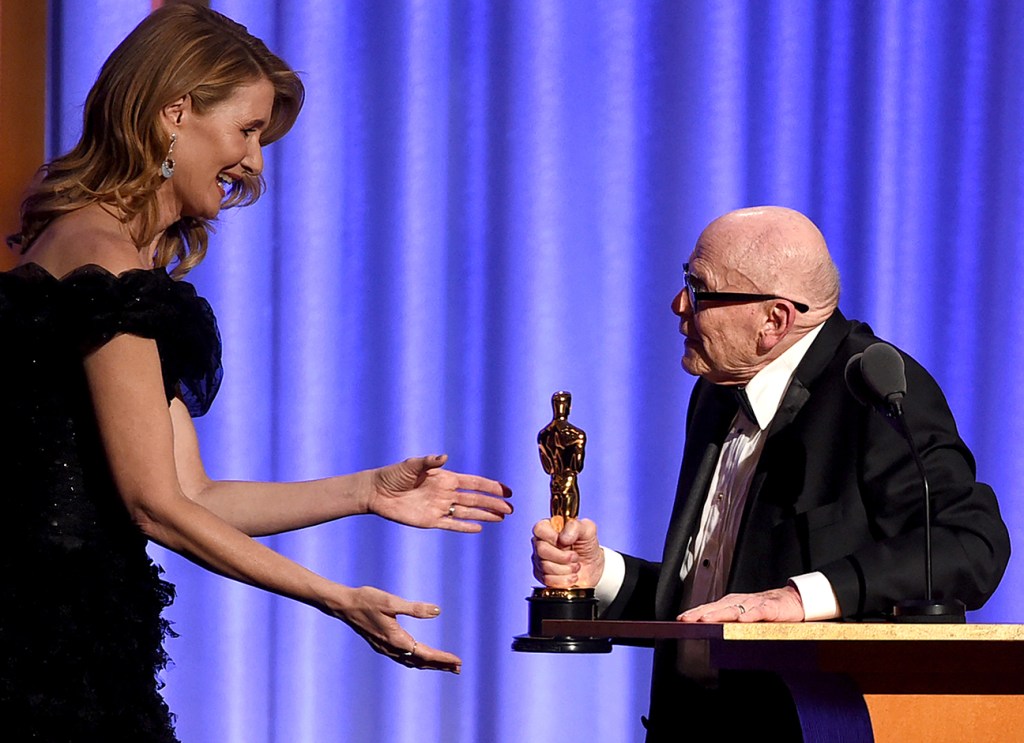 Though there were teleprompters and prepared speeches, the evening had plenty of moments of spontaneity as stars circulated throughout the room. In one such encounter, Mary Poppins Returns’ Lin-Manuel Miranda stopped to take a selfie with Eighth Grade star Elsie Fisher.

In addition to the moments of sincerity, there were also the kind of tart comments that often come in the midst of a busy, awards season weekend, as in the running joke at multiple tables where attendees speculated whether anyone would take the stage like Bradley Cooper’s drunken character in A Star Is Born, pants wetting and all, or the executive who mused during the cocktail hour, “Can’t you feel the quiet desperation?”

Governors Awards: Academy to Scale Back Red Carpet in Aftermath of California Fires