Ashley Judd led a cast of what would turn out to be dozens of actresses in accusing Harvey Weinstein of decades of sexual harassment and abuse in The New York Times’ damning and dam-breaking Oct. 5 investigation. That same night saw the premiere at the United Nations of an indie drama she starred in, Trafficked, about the modern international sex trade.

Now that film is itself at the center of its own fierce debate regarding the troubling verisimilitude of its casting process. The Hollywood Reporter has learned that producers quietly removed its director, Will Wallace, from the project during postproduction over a disagreement involving the depiction of rape. And, in the #MeToo movement that’s emerged in the wake of the Weinstein revelations, a dispute has broken out over whether a small group audition callback session simulating a brothel scenario was inappropriately handled, to the unnecessary physical and emotional detriment of performers who participated in the hope of landing a key role in the project.

One actress, Sanchita Malik, then 20, contacted SAG-AFTRA the day after attending the session at a Hollywood rehearsal space May 20, 2015, to convey her displeasure. (She subsequently filed a lengthy written grievance with the actors’ union.) In the statement, which she briefly posted on Facebook in October (prompted by the Weinstein revelations) before Trafficked’s legal counsel threatened action if she didn’t remove it, Malik claimed she was surprised to learn upon her arrival that day that she would not only be reading opposite another woman in a prepared scene, but also would be participating in an extended exercise in which male counterparts (including the already-cast Jason London), acting alternately as slave owners and brothel clients, were coached to replicate harassment and assault — within certain parameters, including a prohibition on touching breasts and genitals.

Still, Malik alleged, the scenario played out with her hair pulled, neck licked, body pushed against a wall and a fellow actor simulating rape by “pretending to force his penis in me.” She added, “He was making grunting sounds and I was just crying and laying there.” Malik tells THR she suffered from chronic panic attacks long afterward, which required therapy.

In a statement to The Hollywood Reporter, producers Conroy Kanter and Siddharth Kara describe Malik’s claims as “deeply distressing” but insist her characterization of the events involves “a significant embellishment and exaggeration of the level of intensity, crudeness and physicality of the casting session.” Furthermore, they contend her charges materialized only after she learned she wouldn’t be landing the role of one of the primary slaves, Amba — which she’d been seeking — but rather the supporting role of Amba’s friend. (Meanwhile, Malik and her agent, Jason Wasner, counter that the producers dangled the other role, which she turned down, in a failed attempt to secure her silence.)

The low-budget Trafficked saw a limited theatrical release through Epic Pictures and received poor reviews. (The Los Angeles Times wrote of “how unnecessarily eroticized it is, like something from the made-for-video bin in a ’90s-era Blockbuster.”) Films often involve sexually charged scenarios but decisions made about them both onscreen and off are being re-evaluated amid a new sensitivity to harassment and power dynamics. 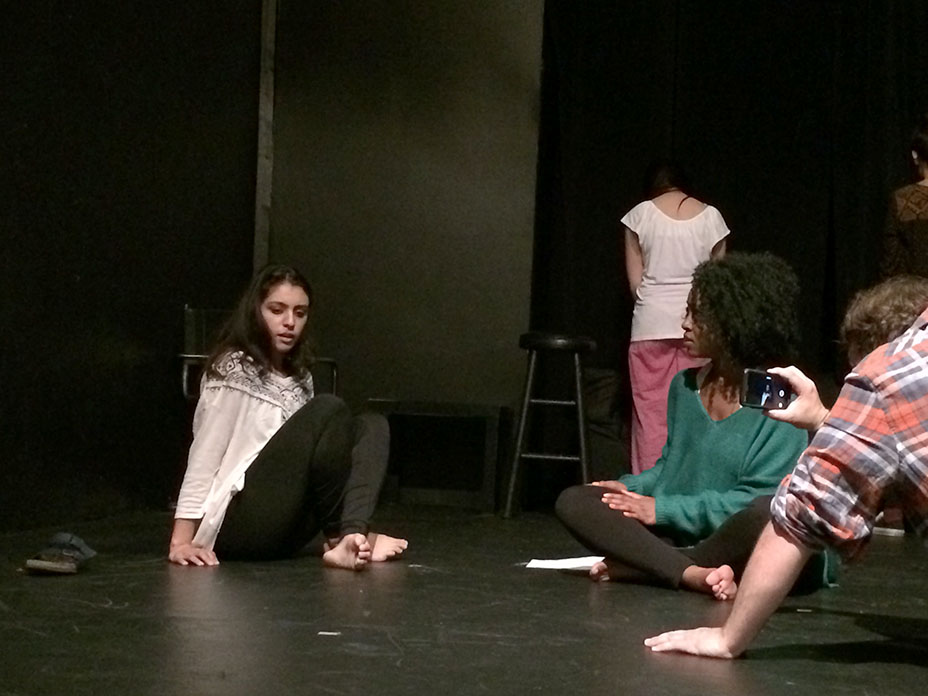 For his part, while likewise questioning some of the details of Malik’s narrative, Wallace allowed that the exercise was indeed relatively extreme — “I’ve certainly been known to think outside the box” — and defended the fundamental legitimacy of his process. “Sometimes actresses need something physical, something that intense into their mind,” said Wallace, who possesses a relatively sizable profile in Austin’s tight-knit film community, where he’s known as the stepson of Terrence Malick. “So many actresses welcome it and push for something further.”

THR spoke to four other actresses who participated in the same May 20 group exercise about their own experiences. Some of them ended up cast in the film. Each requested anonymity to share her views freely.

All agreed with Malik’s contention that the actresses felt blindsided by the verisimilitude of the exercise’s violence, only being euphemistically told in advance by Wallace and his associates that they would need to be prepared to “push” and “challenge” themselves with an “intense” experience. “It’s to-date probably the craziest audition experience I’ve gone through — it was unnecessary and overkill,” said one. “You didn’t need to see that to know if these were the actors you wanted.”

They also corroborated Malik’s assertion that the session was at times unnecessarily physical, reporting dragging, grabbing and pinching in a free-flowing improvisation that went — to their minds — off the rails. “I think we all definitely had some bruises when we left,” said another. Added a third: “I think [the filmmakers] were super-clueless and didn’t know this was not normal. I remember being really scared out of my mind. I know they were trying to get us there emotionally, but that’s not how they should have been doing it.”

Still, these other actresses didn’t experience the most lurid of Malik’s claims, a faked rape, and didn’t witness her experience it either. (Each woman improvised opposite a different sequence of men in the exercise.) They note, however, that they themselves were hyper-focused during the group session on their own concurrent auditioning and sensorial responses to the emotionally elevated atmosphere. None felt comfortable utilizing the proffered safe word (“Will,” the director’s first name) since to them it effectively meant giving up on their hoped-for part, as well as disrupting female colleagues who were simultaneously competing for roles.

Informed of these accounts, Wallace responded: “I guess I need to re-evaluate how I’m handling things.” After THR presented the same material to the producers, they asked Alpa Banker, another actress who was part of the session and eventually selected for the Amba role, to come forward. While recognizing her fellow actresses’ conceptual concerns, particularly about the inherent power dynamics at play — “you might feel like you can’t speak up because you’re up for a job” — she sought to texture the day’s casting process. (“Sanchita was next to me [during the exercise], and at one point she was sniffling and so I reached for her — and she side-eyed me, like, ‘Get your hand off me, bitch!’ It was clear she wanted to keep crying. I thought it was funny. [It was like] I was stepping on her game.”)

Banker, who herself was bruised, acknowledged that the exercise was tough — “I wanted to get out of there; the next male I saw I wanted to drop-kick” — but felt it was appropriate as a barometer given the gritty realism of the film. “We were suburban first-world girls pretending to be trafficked,” she said. “How else to understand? It’s like stage combat. You have to go with it, like a dance. The ethics of letting things go that far? I don’t know how other directors have handled it, but I think it was a useful exercise. It wasn’t traumatic. It wasn’t sexual harassment or assault.”

Several other issues swirled around the session. The actresses assert the exercise was captured on video, which Wallace affirms; when THR requested the footage to review, the producers denied awareness of its existence. Despite the fact that the purpose of the day was to winnow out the candidates, neither of Trafficked’s two casting directors, who included Wallace’s wife, Sara, attended. (“I definitely think casting should have been there, in hindsight,” says the other casting director, Jaime Gallagher.)

In another instance, attendees were surprised to learn that what they presumed to be private “reflection letters” solicited by Wallace shortly afterward — intimate correspondence that at times revealed their own histories of sexual trauma — while still seeking roles in the project, had later been shared by producers with THR in an apparent attempt to show that they hadn’t been turned off by their May 20 experience. “As far as reckless professional behavior goes,” one told THR, “them sending that letter to you without my knowledge or consent seems to be par for the course.”

The producers’ attorney, Bianca Goodloe, responds, “They were provided voluntarily by the actors to the producers, and as such are the property of the production, which has every right to do with them what they wish.” (The letters all appear to have been emailed from the actresses to Wallace or his assistant.)

The producers and Malik are at odds over what transpired after the audition as well. Kanter paints Malik as an overly assertive networker, who seemed fine following the exercise and allegedly had enough presence of mind to corner her into an amiable if presumptive post-session chat about the production’s intended shooting schedule over a beverage and snack. Malik parries that Kanter and Kara’s wife, who was in attendance, saw her seated in a state of shock as the other actresses were leaving and kindly offered to talk with her at a nearby cafe while she calmed down.

According to an email from SAG-AFTRA official Adam Moore to Malik and her attorney Nov. 30, which was shared with THR, the union spoke with Kanter about the issue July 1, 2015. “In this conversation we were told that the language in the [casting] breakdown was a mistake that would be corrected immediately and that the production was doing everything possible to protect people who auditioned for and worked on this project, especially given the very sensitive subject matter,” it read.

Trafficked producer and screenwriter Kara, who was also in attendance at the exercise, is a Harvard lecturer and author of 2009’s acclaimed Sex Trafficking: Inside the Business of Modern Slavery. (His credibility on the issue facilitated the film’s premiere at the UN.) Shortly after he learned that Malik had initially contacted SAG-AFTRA, he wrote her a lengthy email on May 24, 2015 (shared with THR by both parties), in which he reminded her of his extensive bona fides before explaining, “I can say with certainty that I do not believe any…lines were crossed in the acting session.” He went on, taking note of the prospective social good of the project and her grievance’s potential to besmirch it, “I am sure your intention is not to harm my anti-trafficking work, let alone the countless victims this film hopes to assist.”

The letter frustrated Malik. “This isn’t a discussion about human trafficking,” she says now. “This is about how the audition was run. We actors did not need to go through what we went through to understand how trafficked victims feel. Acting is about creating a world, imagining it. What happened was inappropriate.”