When it comes to the independent film industry, action and sci-fi are expensive and unreliable at the box office; comedy, at best, is hit and miss; and drama, without a cast of A-listers, is almost impossible to sell.

But everybody loves a scary movie.

Scream for scream, horror is the most profitable genre around. Look at recent indie releases such as STX Entertainment’s The Boy (domestic box office: $36 million) and A24’s The Witch ($25 million) as well as studio-backed success stories including Blumhouse’s Universal-released titles The Purge: Election Year ($79 million) and Warner Bros.’ Lights Out ($67.3 million).

“You can make a horror movie for less than $5 million and when they work, when you get an Insidious, a Sinister, it can go on to gross $100 million,” says Stuart Ford of IM Global, which sold the Blumhouse titles. “And horror, unlike action, plays equally well with male and female audiences.”

“Horror is concept-driven, not star-driven,” says Dean Devlin, whose Electric Entertainment recently handled the release of Vincent Masciale’s horror comedy Fear, Inc. “If you have a relatively clear concept and as long as the budgets are reasonable, horror has a decent chance of success.”

Why Pre-Election Anxiety Is Hitting AFM

For Nate Bolotin, a partner at XYZ Films, the overseas fest circuit is “crucial for reaching and tapping” the hard-core horror audience. “Maybe the studios don’t need to pay as much attention to them, but for the indies, these folks are critical. They are what gives your film an edge with horror fans around the world. If they like your movie, they’ll promote it like crazy.”

Hard-core horror fans, Bolotin notes, also are more open to new directors, foreign-language titles and genre experiments. He points to Under the Shadow, the Farsi-language chiller set in post-revolution Iran that is Britain’s entry for the best foreign-language Oscar (XYZ has picked it up for a U.S. remake).

The company’s upcoming releases also include Dearest Sister, a supernatural horror film set in Laos, and XX, an anthology of scary shorts shot by female directors that Magnolia has nabbed for the States. “Horror fans are more open to stories coming from different voices,” says Bolotin. “They embrace experimentation.”

Horror also can provide an easier entry into the U.S. market for international filmmakers. After making a couple of short films in Germany, director Fritz Bohm found it difficult to raise money for his feature debut, the fairytale-inspired horror story Wildling.

“There are real problems trying to finance these kinds of productions: fantasy, horror, these genres I love, out of Europe,” says Bohm. “The American market is a lot more open for genre movies of all kinds.”

With backing from Maven Pictures in New York, Bohm shot Wildling this year with a cast featuring Bel Powley and Liv Tyler. Now in postproduction, IM Global is shopping the title to buyers at AFM.

However, packing your films with scares is no guarantee of sales. The success of indie horror has brought a deluge of low-budget copycats, the likes of which clog the halls of AFM at the Lowes Santa Monica Beach Hotel.

The home video market, which used to absorb the bulk of horror schlock, is dead or dying in most territories, meaning fewer of the AFM zombie-monster-slasher kill fests are finding buyers.

“There are people still successfully getting equity to make these movies selling the old model of international presales, but that model is dead — the shift has already occurred,” says Bolotin.

All those mid-range horror producers and sales companies hanging around AFM? They’re the walking dead. And the purge is coming.

Under the Shadow: A Horror Film Set in Tehran?

In his debut feature and Sundance hit Under the Shadow, snapped up by Netflix, Babak Anvari turned to somewhat unusual horror territory — a family apartment in 1980s Iran and a supernatural Islamic spirit known as a Jinn. The Hollywood Reporter talked with the filmmaker about the pic. 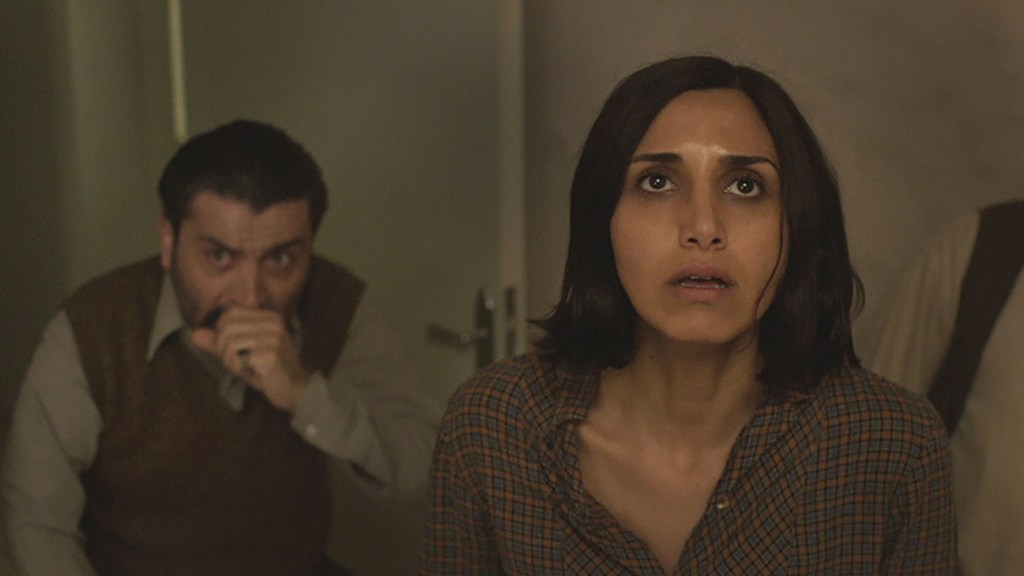 THR: What made you go for the unusual horror backdrop of Tehran during the Iran-Iraq war?

Anvari: I was basically tapping into childhood memories. In Tehran, it was the invisible war. The battlegrounds were in the south, but in the capital it was always the bomb raids and missile attacks. You’d hear the siren and run downstairs. It was such a dark and intense time that I thought it made the perfect setting for a psychological thriller-horror.

And why did you choose Jinn as your boogieman? It’s quite an untapped source for horror.

Wes Craven actually used Jinn in his Wishmaster series! But I grew up hearing these urban legends about Jinn, and they used to scare me a lot. They’re basically like demons — every culture has one. There were loads of stories about them as I was growing up. So going back to my memories, it was war and Jinn! And these got merged into one.

Are you good at handling horror yourself?

I want to pretend that I’m a mature, grown up and rational man, but I tend to freak myself out. When I was writing Under the Shadow, I had a full-time job so was writing late at night, and I remember going to bed and not being able to sleep because I’d been thinking about scary stuff so much.