As another awards season gets underway, it was film’s most seasoned talents who dominated the stage at Sunday’s Hollywood Film Awards.

The Hollywood Film Awards, which are not televised, kicked off by bestowing Avengers: Endgame with the best blockbuster award. Host Rob Riggle poked fun at the recent controversy surrounding the film by quipping, “And here to present the award is Martin Scorsese,” before introducing Mark Ruffalo to hand the award to Marvel chief Kevin Feige and film vp Victoria Alonso. Scorsese, who was in the room, stoked the ire of Marvel fans last month by saying of the superhero genre, “It isn’t the cinema of human beings trying to convey emotional, psychological experiences to another human being.”

Ruffalo, who plays Bruce Banner/The Hulk in the Marvel movies, didn’t address Scorsese directly in his speech, but instead made pointed comments about the power of the superhero movies, to rousing applause.

“The team at Marvel Studios did something that brought the whole world together. It’s not something you can do with just spectacle alone, by the way, but there’s plenty of that,” he said onstage. “What really speaks to people about these movies, I think, is the heart and humanity of characters, that’s what makes Avengers: Endgame so powerful to witness — these characters that care about and reckon with the world around them … to watch them struggle and survive and sometimes even say goodbye. That’s what makes it cinema.”

Scorsese, who is back in the awards conversation this year with his sweeping Netflix mob saga The Irishman, was on hand to honor his longtime producer, Emma Tillinger Koskoff, with the Hollywood producer of the year award. “She makes it possible for me to be able to make the film I want to make, to protect and help me create how I see it,” he said.

Tillinger Koskoff, who also produced Todd Phillips’ Joker and the Safdie Brothers’ Uncut Gems this year, was in tears as she thanked Scorsese: “Marty, my rock, my mentor, my biggest champion. He taught me everything I know — your passion for film and your mastery of the craft inspire me everyday. You trusted me, you supported me … thank you for sharing me — Joker, Todd — thank you for encouraging me to grow.”

The Irishman is the first time Scorsese worked with Al Pacino, who joined Robert De Niro and Joe Pesci in the gritty, three-and-a-half hour crime drama that echoes the filmmaker’s most notable works such as Goodfellas and Casino. 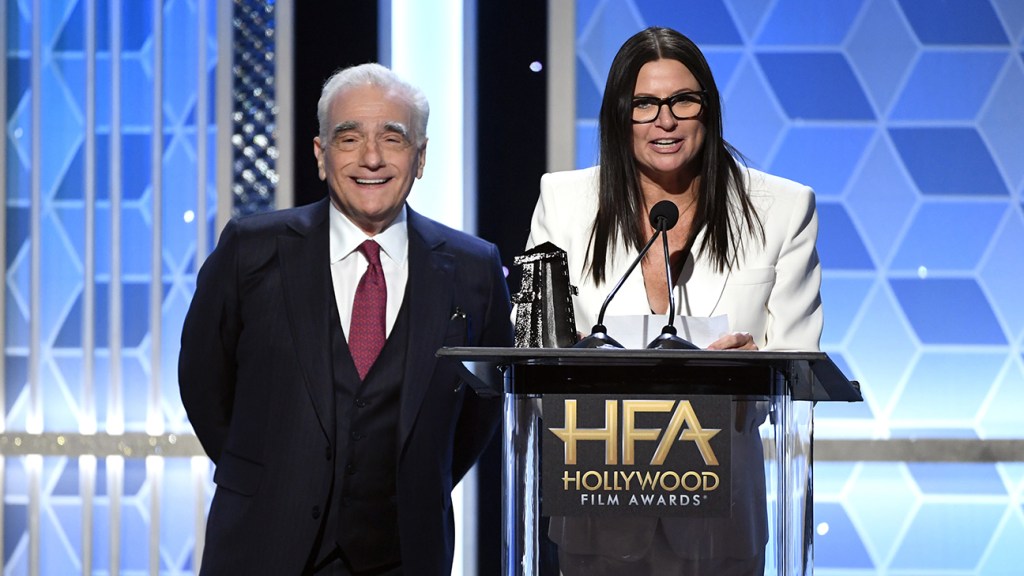 Veteran filmmaker Coppola was drafted to hand Pacino his award for supporting actor, paying tribute to the films they had made together as well as Pacino’s other notable performances, including Scarface, Serpico and Dog Day Afternoon.

“Some are blessed with God-given talent and others apply incredible hard work to achieve results, and then there are those who are gifted with intelligence that guides them,” Coppola said. “And Al Pacino was given all three abilities.”

Pacino looked emotional as he came onstage, wiping his eyes as he collected his award and, on hearing Shia LaBeouf and Charlize Theron loudly cheering him from the audience, shouted back “I love you Shia! And Charlize!”

“I don’t know if it’s irony or serendipity,” Pacino said, “but The Irishman is playing at New York’s The Belasco Theater …. I made my Broadway debut at The Belasco and now The Irishman is at the Belasco, and this man here [Coppola] saw me in that play 50 years ago, and gave me the part of Michael Corleone.” 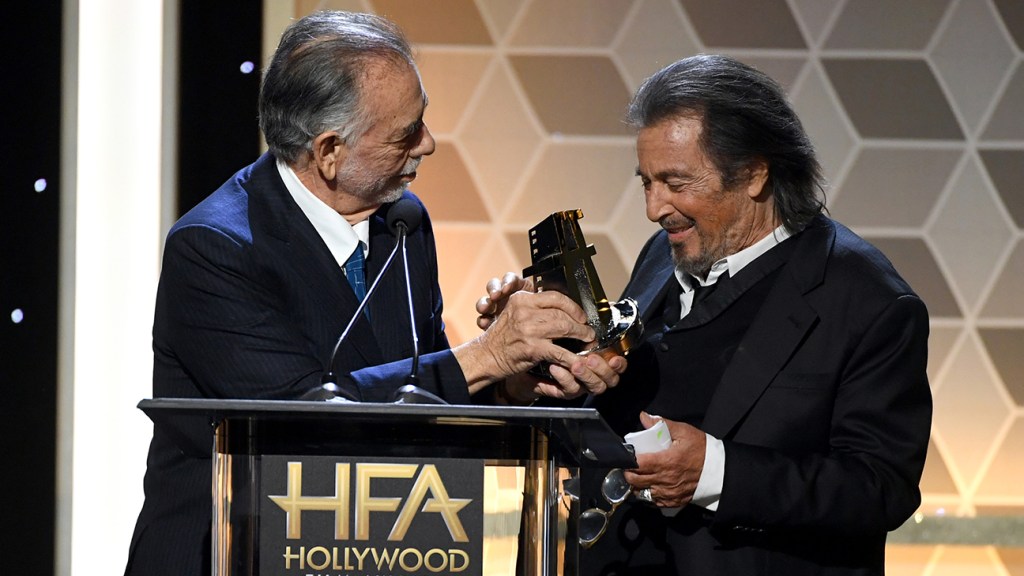 Serendipity continued to be a theme through the night, as stars used their acceptance speeches to reflect on the films for which they were being honored. South Korean filmmaker Bong Joon-ho was starstruck meeting Pacino and Coppola backstage just before he came on to accept the Hollywood filmmaker award.

“I was just 11 years old when I first watched The Godfather, and at 12 years old, I watched Dog Day Afternoon, and the movie was censored in South Korea. Actually, I didn’t know the exact relationship between Mr. Pacino and John Cazale … anyways, since I met the two of them, it’s ok even if I never received this award. That was a joke obviously,” Bong quipped, as the audience laughed.

The filmmaker, whose indie hit Parasite is one of the year’s best-reviewed films and a strong contender in the awards race, also thanked the Hollywood Film Awards for giving him a filmmaking accolade. “It’s not for foreign language something. It’s for filmmakers. We filmmakers only use one language — cinema,” Bong said, to applause.

Robert Downey Jr. was on hand to present LaBeouf with the screenwriters award, calling his movie Honey Boy — which LaBeouf wrote while in court-mandated rehab — “a damn near perfect screenplay.”

LaBeouf ruminated on the circumstances that led him to write Honey Boy, in which he also stars as his father, in his acceptance speech. 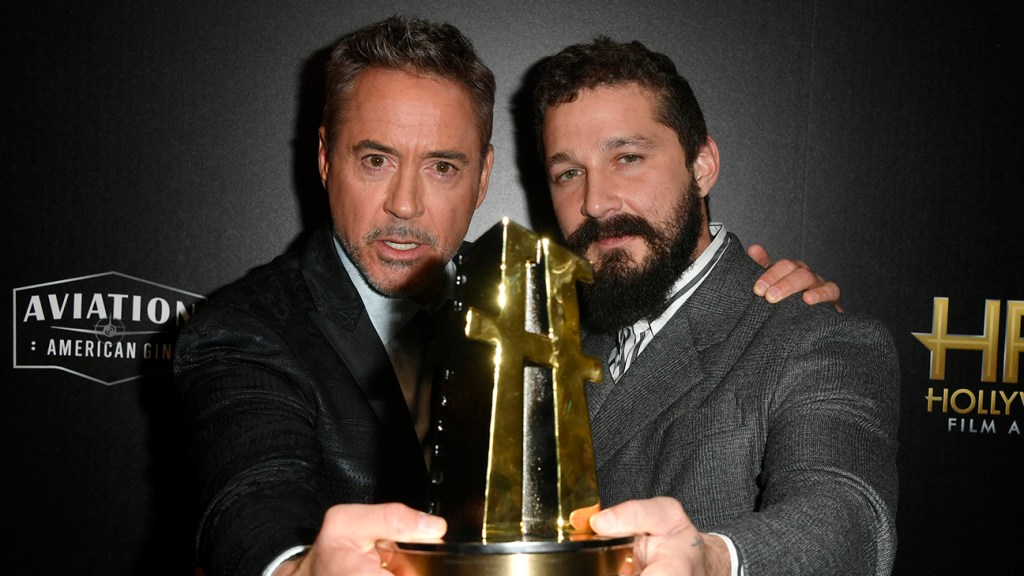 Theron, who received the career achievement award, shared one of the night’s sweetest moments with her Bombshell co-star Nicole Kidman, the latter of whom gave an eloquent introduction touching on her versatility as an actress. “She’s played a serial killer, she’s played an ass-kicking hero, an anti-heroine, a romantic lead, an activist, a mother … the only thing these performances have in common is that they aren’t what you expect,” Kidman said.

“She dives in with intensity, humanity, depth and vulnerability and she gives so much heart to even the toughest characters. But in Bombshell, she has absolutely pulled off a high-wire act,” Kidman praised. “There’s a line in the film that says we don’t get to choose our heroes. And, that’s true, but in going on this journey with you girl, I got to work with one of mine.”

A visibly stunned and emotional Theron embraced Kidman tightly as she collected her award, while the audience gave her a standing ovation.

“Your work has had a profound impact on me, you will never know,” Theron said to Kidman. “It’s wonderful to see all the characters I’ve had the privilege to play; not a day goes by that I’m not grateful for all the opportunities that I’ve had. Tonight made me reflect on all the incredible directors, writers, producers, actors and studios that have taken a chance on me. I only have the career I have because so many people in this industry have either mentored me, took me under their wing, showed me kindness and pushed me as far as I could ever go in my career.”

Renee Zellweger was awarded best actress for Judy, in which she plays screen icon Judy Garland, a role that has her pegged as a frontrunner in the Oscar best actress race.

“You know those weird opportunities that come along weirdly in your life and they initially seem to make no sense at all but they end up among one of your greatest life experiences? Collaborating and making Judy was personally and definitively that,” she said. 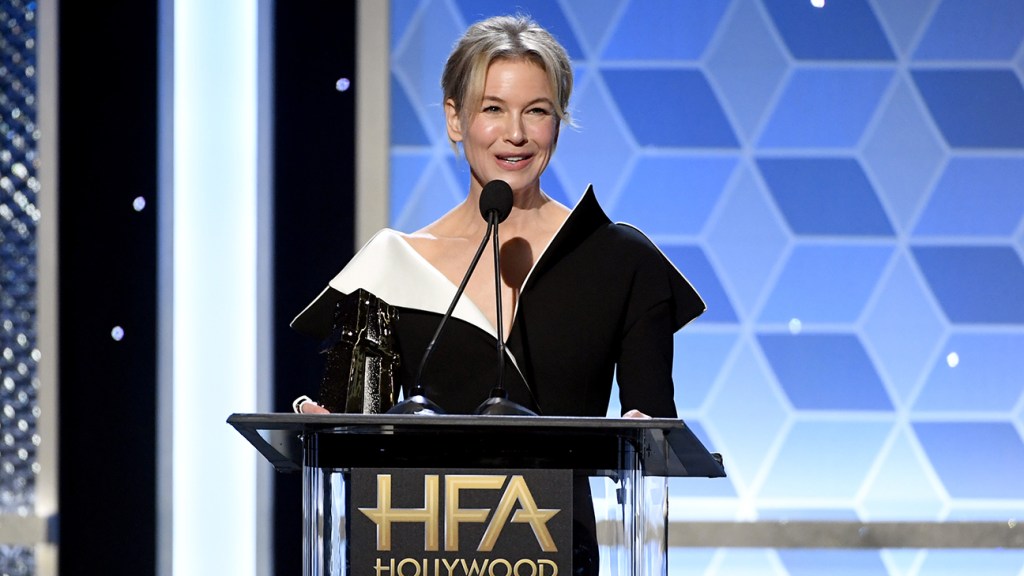 Taron Egerton, the recipient of the breakout actor award for his role as Elton John in Rocketman, talked about his encounter at drama school — another moment of serendipity — with Cynthia Erivo, who was awarded breakout actress for Harriet.

“When I was 17, I auditioned for drama school with ‘Your Song’ and I never dreamed that 13 years later, I would sing it in this film playing Elton John,” he said. “Drama school is also where I met Cynthia Erivo — she was in her third year and on one of my first days, she came up to me and she gave me an apple and told me I need to keep my strength up. So thank you Cynthia!”

The Hollywood Film Awards usually serve as the official start to awards season, but this year, tailed the Governors Awards, which the Academy of Motion Picture Arts & Sciences hosted last weekend in a shortened awards year that’ll culminate in an earlier-than-usual Oscars on Feb. 9. Also honored on Sunday night was Laura Dern for supporting actress in Noah Baumbach’s Marriage Story, while Alicia Keys presented Pharrell Williams with best song for The Black Godfather documentary and Matt Damon and Christian Bale shared giggles as they came onstage to present their Ford v Ferrari helmer James Mangold with the director award.

And in yet another moment of reflection on fate, Dakota Johnson came onstage to introduce the recipient of the best actor award, her stepfather Antonio Banderas for Pedro Almodovar’s Pain and Glory, with a speech about the messiness of divorce, the beauty in melded families and the love and respect she has for her stepfather.

“I come from a family of many a marriage and I got very lucky, I got a bonus dad who, over time, I realized is one of most influential people in my whole life,” Johnson said. (Her mother, Melanie Griffith, married Banderas in 1996, and the couple had a daughter, Stella. They divorced in 2015).

“My stepfather Antonio Banderas burst into our lives and he was so vibrant and fun and funny and his English was abstract and we found it absolutely amazing,” Johnson added. “Now as a grown woman working in the same industry, I understand that Antonio is one of our finest artists in film, stage and television, in multiple languages, as an actor, writer, director, producer, singer — his range is absolutely astounding.” 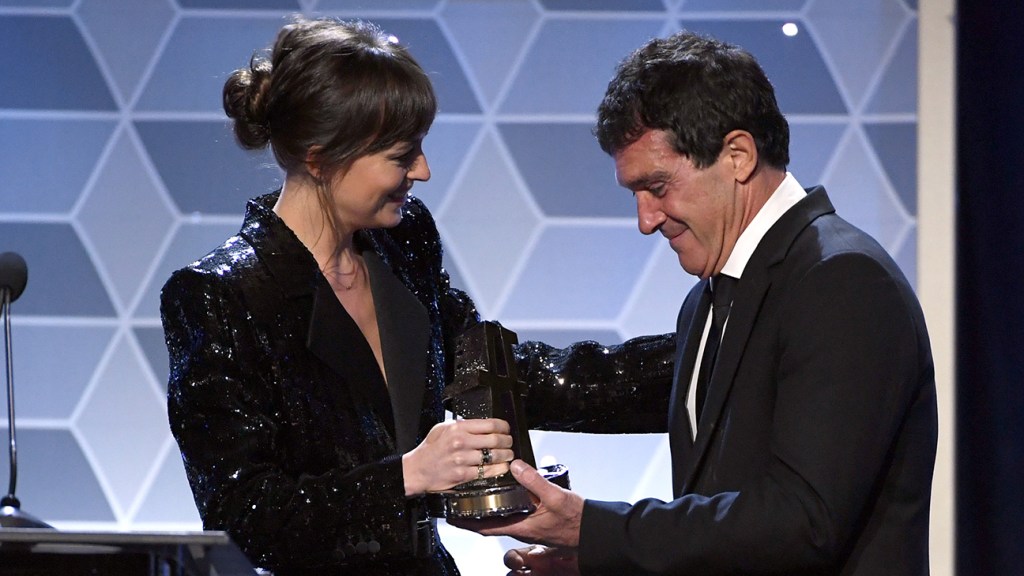 Banderas, who said he was in tears watching Johnson’s speech backstage, praised his long collaboration with Almodovar — he has starred in eight of the Spanish filmmaker’s movies — in his acceptance speech. “He has incredible integrity, honesty, he never, ever betrayed himself. he has been unbelievably loyal and he has been so good not only for the actors and actresses that work with him, but for the country itself,” Banderas said. “That’s why I’m really thankful to this man that I respect, admire and love.”

He dedicated his award to Johnson, promising her that “the best is still to come” for their family, and his daughter Stella, calling her his “best production.”